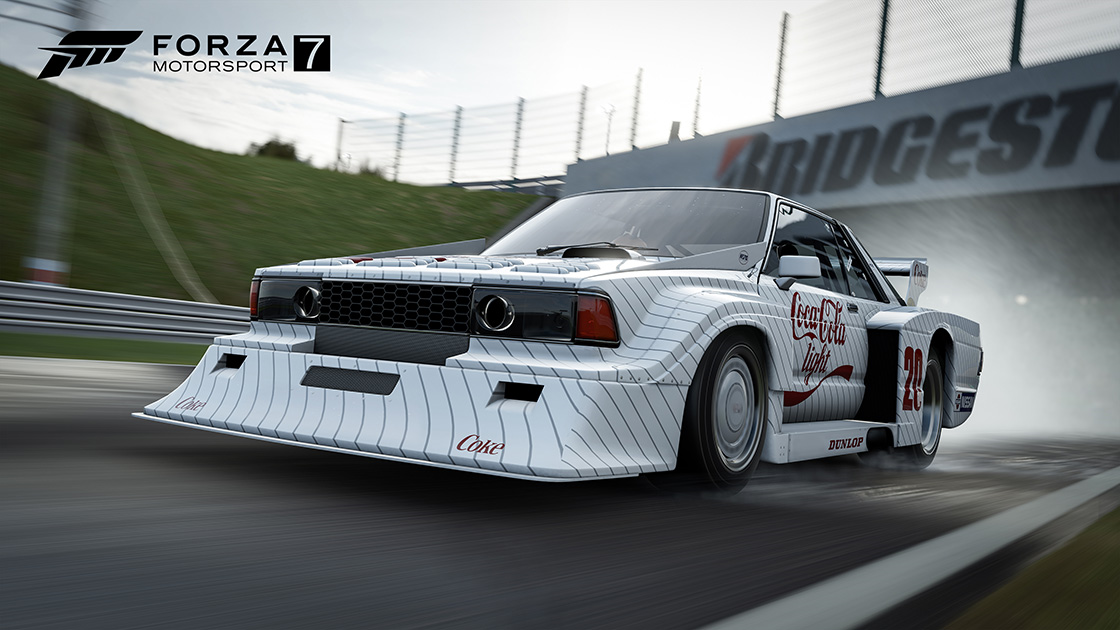 The team over at Turn 10 Studios have been rather busy with Forza Motorsport 7 these last few weeks, and now players can enjoy the fruits of these labours thanks to the release of not only a considerable free update (info HERE) but also the next new car pack DLC, titled rather snappily as the Samsung QLED Car Pack DLC..

Containing seven new cars from a variety of manufacturers, eras and types of vehicle, the new pack is a diverse cross section of the automotive world from racing to off road, performance sports car and family luxury.

Available now for PC and Xbox One family of consoles. 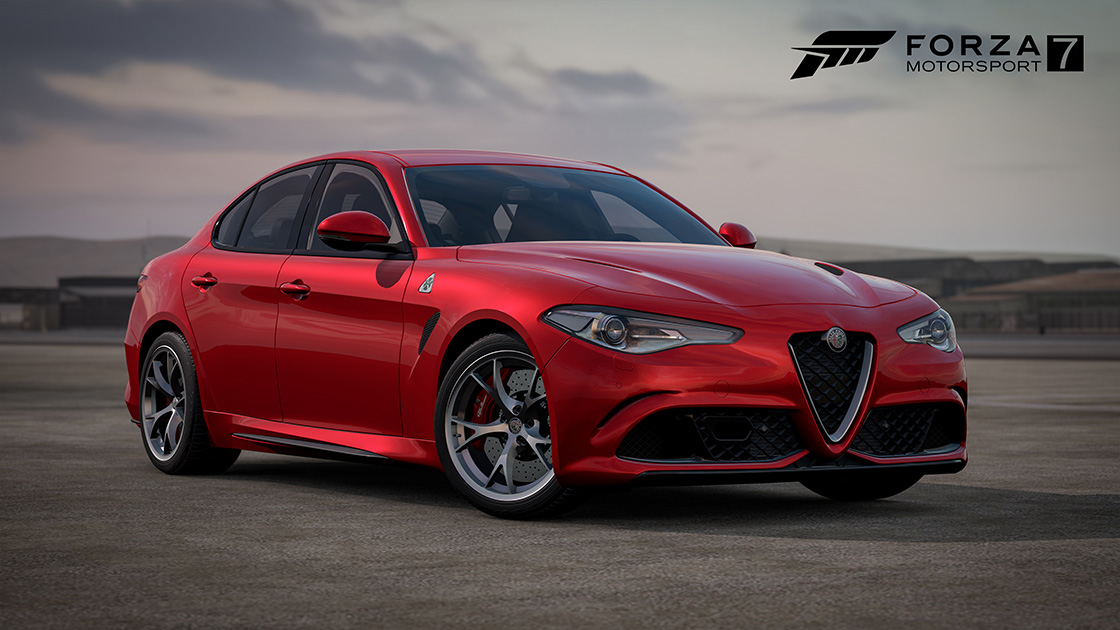 It’s been 21 years since Alfa Romeo sold cars in the United States, and one drive of the new Giulia might infer they spent the entire time making sure their next entry was perfect. The Giulia Quadrifoglio is all Alfa Romeo, with exotic lines, delicate styling touches, and the performance you expect from an Italian sport sedan. In Quadrifoglio dress the biggest treat is the 505 horsepower Ferrari-derived 2.9-liter twin-turbo V6. Not only is it four-letter fast, but the sonorous rumble it emits is stunning from idle to redline. The front bumper on Quadrifoglio models is aggressive looking and, in the rear, you will find the gigantic rear diffuser and a gorgeously protruding exhaust. It’s been a long time to wait for the new Giulia, but by any measure it was worth it.

If the Nissan Bluebird’s iconic angular aero kit and amazing wide body don’t immediately impress you, then the raw gut-wrenching power of its 562 horsepower LZ20B engine will. This was of course the 1980s and the silhouette-bodied cars were outlandish experiments, designed to improve grip and destroy the competition. Underneath the body, whose silhouette resembles the Bluebird production model, is a bare-naked race car. The KY910 was the first from Nissan to show what its racing efforts could produce in this class, and it was monumentally successful. The Coca-Cola liveried #20 won the Fuji Grand Championships in 1980 and 1982, and three of four rounds in 1983. Could it be your next go-to racer? The #20 is ready to ride on rails, but be careful, this is a pure race machine not to be taken lightly. 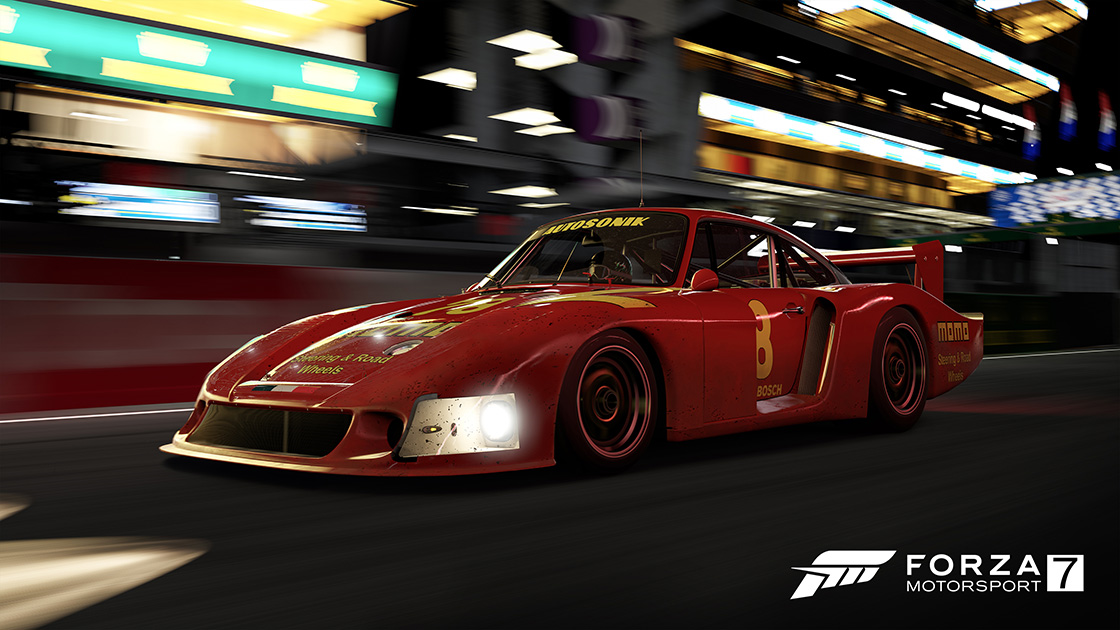 Most folks know “Moby Dick” as the famous novel written by Herman Melville. In automotive circles, the nickname “Moby Dick” refers to just one car: Porsche’s beloved 935/78. This race car represented the peak of FIA Group 5 racing before rules changes made it obsolete. The long white tail of its Martini-liveried cousin gave it the nickname, and it remains one of the greatest beasts to ever blast down the Mulsanne Straight at Le Mans. The car was built specifically to compete there, even incorporating right-hand drive for better balance and sighting for the curvy clockwise course. The 935 /78 could reach speeds as high as 227 mph; enough to pass the dominant Renault Alpines and the Porsche 936. The massive turbo (along with massive lag) was known for extraordinary exhaust fireballs, but these 845 hp beasts were sadly short lived. Now’s your chance to relive those late-70s thrills again. 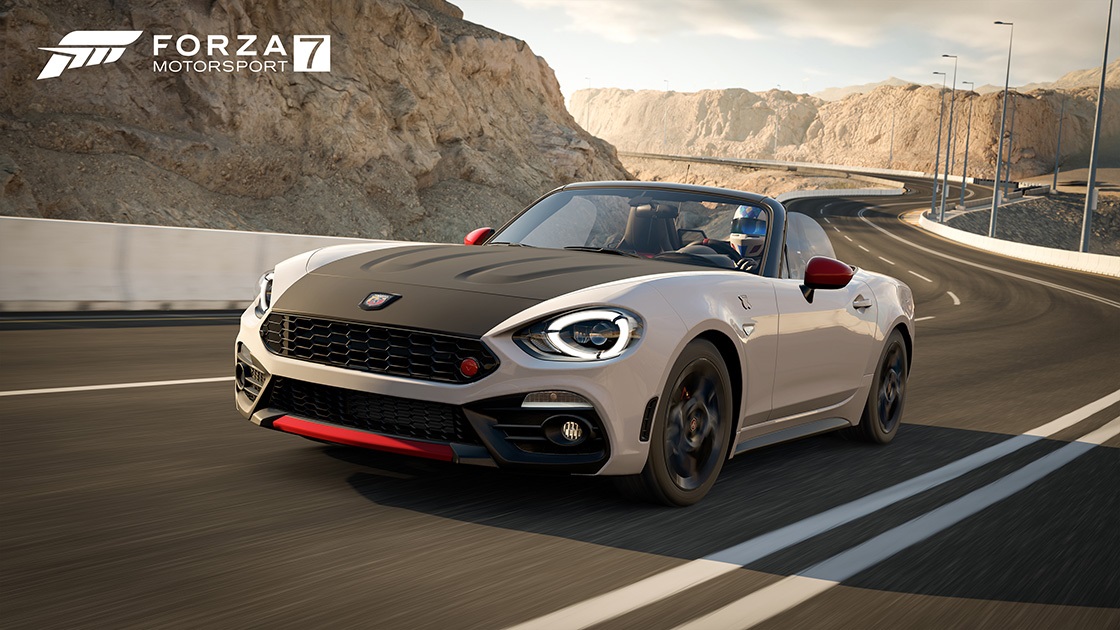 Built on the same chassis and with many of the same components of the Mazda Miata, the Abarth 124 Spider takes that solid base and spices it up with Italian flair. This variant has the most horsepower available and an optimized suspension. The car’s bulging lines beg to cut their way through the wind with the top down. Under the long hood is the treat that separates the 124 from its Japanese sibling. Whether you actually find the turbo in the engine bay or note the distinguishing sound of it spooling up as you throttle up, the forced induction is what makes this little convertible a real treat. Like the Miata, this is a car you can drive at 100 percent all day and have loads of fun in the process. So, what are you waiting for? 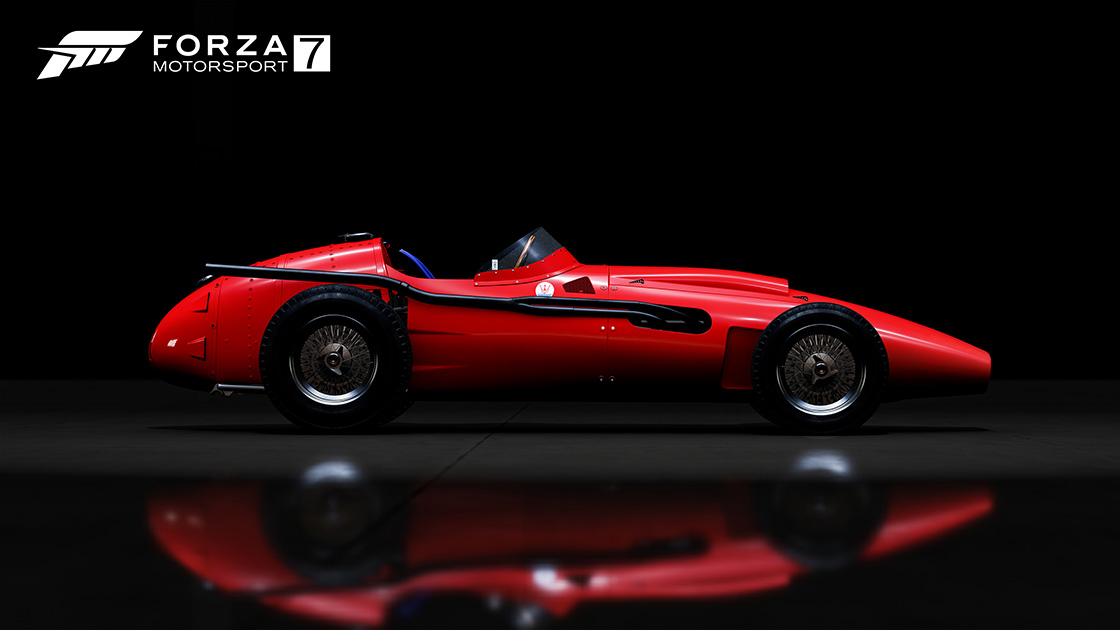 Sir Stirling Moss said it was one of the best front-engine Formula One cars he had ever driven. The great Juan Manuel Fangio broke the Nürburgring track record in a 250F nine times in ten laps in one race, overcoming a 48-second gap to win the German Grand Prix on the second-to-last lap. These are just a few of the tales from the cigar-bodied 250F’s storied history as one of the last of the front-engine racers of its era. There were only 26 examples ever produced and their racing spanned from 1954 to 1960. Piloting the 2.5-liter V12-powered lithe tube frame chassis on ancient tire technology not much wider than the accelerator pedal was not for the faint of heart. The fuel mixture contained methanol, gasoline, acetone, benzol, and castor oil, a potent and poisonous mix. The notion of seat belts seemed absurd as it was preferable to be thrown from the vehicle than be burnt alive in a crash. While you will be safe racing the 250F in Forza, spare a thought for the motorsport heroes that risked their lives every time they climbed in behind the massive steering wheel. 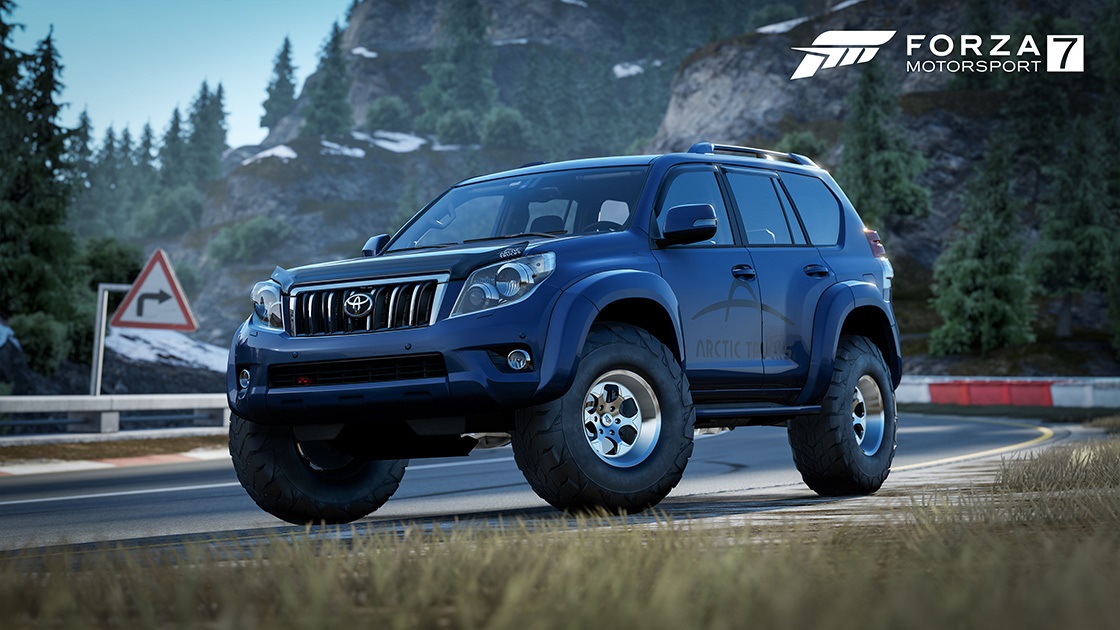 Icelandic vehicle re-engineering house Artic Trucks says you don’t have to be a polar explorer to own one of their rigs, but the fact is you could be. Artic Trucks have been driven to both magnetic poles and even set a record for the fastest journey to the South Pole. In the case of the Land Cruiser AT37, defined by the size of its tires, you have a vehicle that isn’t simply lifted for looks; it has been re-engineered from the ground up to be one of the most versatile rides on the planet. A suspension and body lift, as well as full consideration of all drivetrain components, gives this Land Cruiser not only a unique look but an unforgettable driving experience. 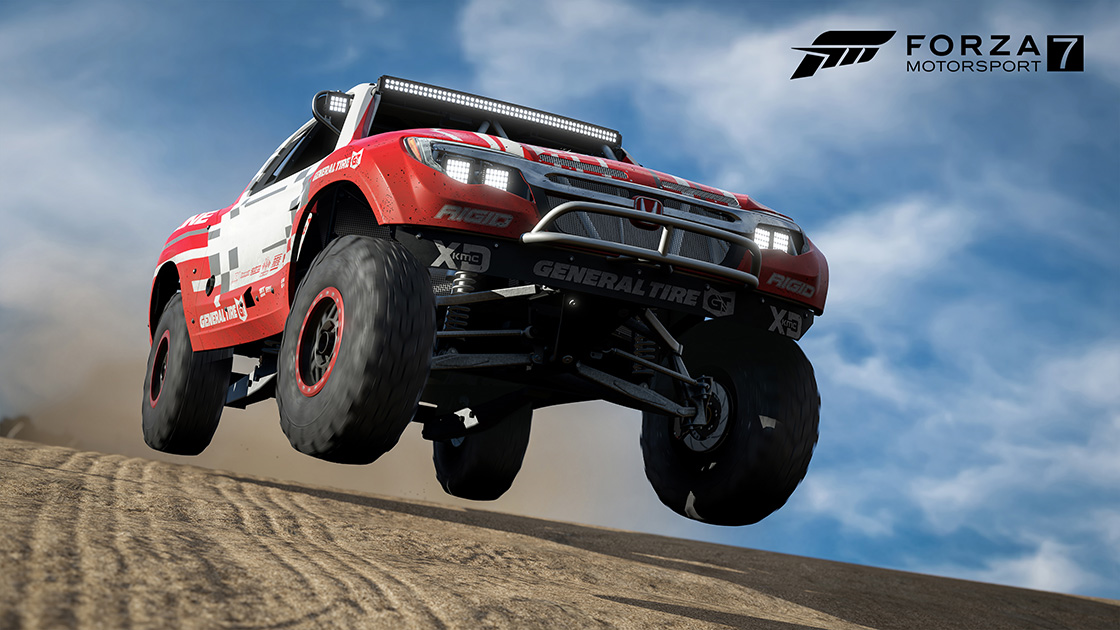 The Baja 1000 is one of the most grueling off-road races in the world. The 2015 course was 821 miles of rocks, sand, and incredible obstacles. This specially built Trophy Truck competed and won Class-2 (forced induction engines up to 3.6 liters) that year. Honda Performance Development built the Ridgeline Trophy Truck to showcase the design of the second generation Ridgeline pickup. Design cues including the front facia, hood, roof, and bed are taken directly from the new model. The engine utilizes the same block, heads, and crankshaft from the 3.5-liter V6 that will power the 2017 production model. Twin-turbos in the race truck helped bump output to 550 horsepower, and the remainder of the vehicle is a custom-built tube frame chassis with the kind of massive suspension needed to take the punishment the Baja desert dishes out every mile. Take this one of kind racer to the track against the other off-roaders and find out for yourself how it matches up.

Forza Motorsport 7 on Xbox One and PC is available to purchase right now!

Like the look of the new car pack? Which is your favourite car from the set? Let us know in the comments section below!
Last edited: Nov 3, 2017
Sort by date Sort by votes
S

some interesting cars, but i'll rather wait 2 years for forza 8 knowing that turn 10 will add these and the upcoming dlc's into forza 8 just like they did it with the forza 6 dlc's into forza 7.
Upvote 0 Downvote
C

I wondered at what point we would see major RL advertising like this in games , I am afraid its just the start of things to come , games reach out to more people now than TV .
Upvote 0 Downvote

Still think it'd be better to leave out the silly offroad trucks to the Horizon franchise as it's just stupid to have them in the game with no offroad/rally courses and keep it to race cars and performance road cars and then bring new or previously unseen cars to the next Horizon game that may have been exclusive to the Motorsports games, but microsoft are money grubbing asshats so they'll probably be DLC in the next Horizon game anyway. O B E Y A N D C O N S U M E
Upvote 0 Downvote

sKeno said:
some interesting cars, but i'll rather wait 2 years for forza 8 knowing that turn 10 will add these and the upcoming dlc's into forza 8 just like they did it with the forza 6 dlc's into forza 7.
Click to expand...

sKeno said:
some interesting cars, but i'll rather wait 2 years for forza 8 knowing that turn 10 will add these and the upcoming dlc's into forza 8 just like they did it with the forza 6 dlc's into forza 7.
Click to expand...

Damn, you beat me to it.
Upvote 0 Downvote

Everyone knows the even number Forza are the best.
Upvote 0 Downvote

Excluding the trucks, that's one heck of a DLC. Especially the Group 5 stuff.
Upvote 0 Downvote
S

the point is there is no point buying overpriced dlc now as it will be in the next game.
Upvote 0 Downvote

sKeno said:
the point is there is no point buying overpriced dlc now as it will be in the next game.
Click to expand...

Unless you want it now, which is why it's optional.
Upvote 0 Downvote

naaah, rss mod will be bettter
Upvote 0 Downvote
You must log in or register to reply here.