I just got the Samsung Odyssey just before I noticed the Plus. Oh well! The bugs should be worked out?

Just wanted to ask about install procedures and settings tips.

Install is supposed to be plug in and follow the instructions as the downtown's come in and install but it kept locking up on their end and then it wouldn't continue after restart. And being Microsoft they hide their apps.
After a few hours I got everything running and wow! Way clearer then the CV1. More FOV. The lenses are quite a bit bigger in the Odyssey. Although I can still see a screen door I would guess its about half of the CV1. Simular to the DK2/CV1.
The best part is the glare is mostly gone which in itself makes for a much clearer view plus the added pixels.
Flicker on shadows and straight edges are greatly reduced.
So far I can't SS much with my i7 4790 1080Ti but its still way better than the CV1 running at 1.8 SS.
Head tracking is very smooth but I can only look around. If I move forward head tracking is locked. I had this problem with the CV1 but can't remember how I fixed it? Any ideas?

Turn on the lights and run room setup wizard in WMR Portal, not SteamVR.
Make sure you have beta of SteamVR and Mixed Reality for SteamVR, there is a checkbox in app prefs.
After that enable reprojection.
https://steamcommunity.com/games/719950/announcements/detail/1652133167137673234

Also recommend to grab this
https://vrcover.com/product/samsung-odyssey-foam-replacement/
Amazon sells them too

I'll have to have another look for the beta of steam. I was watching an old video about it. Wasn't sure if they were still using it?
Thank!

Andrew_WOT said:
Also recommend to grab this
https://vrcover.com/product/samsung-odyssey-foam-replacement/
Amazon sells them too
Click to expand...

Thanks again for your kind help Andrew.
I am not sorry for getting the Odyssey without the plus. The improved FOV, clarity, lack of glare, plus the aliasing is pretty much zero now. Not mention how much more comfortable it is.
The screen door is still there. Would be interesting to see how much better the plus really is? But I'm a little sceptical about reducing screen door without adding more pixels. It would have to be blurred somehow which is not a good thing in VR I think but I could be wrong?

P.S. Is there a way to put AC in window mode? Would be nice, because, even though the added light helped a lot tracking still locks up sometimes.
Last edited: Oct 28, 2018

The only time I had head tracking problem is when I forgot to turn lights on.
Try run Room Setup in WMR portal and after done, tracing and everything, switch to standing/seating setup.
Almost everyone switching to Odyssey from Rift comments on improved FOV, wondering how it works as both claim 110 degrees. Rift is diagonal though, Odyssey does not explicitly state which it is, may be it is horizontal after all. Bumping up SS helps, your 1080Ti should handle it very well.
Things get much clearer at 225% and higher, keep an eye on SS in Video and Application in SteamVR as final is multiplication of both. I usually set overall in Video to 100% and just adjust at Application level.
Link to my settings I posted before in the other thread.
https://drive.google.com/file/d/1y8T8RtP1ma7MzxGmZSshUWhkmBSeNMA7/view?usp=sharing

You can also tuck/fold nose rubber flaps inside if they bother you.

They had come out from behind the face pad to overlap and it took me a bit to figure out why it was so uncomfortable. But once tucked back into place it is pretty comfortable.

This is Plus with Original (not my picture), you can see how on Original tabs are tucked inside
It was never problem for me but some complained about that, anyway quick and easy solution, I've tried it, worked pretty well. 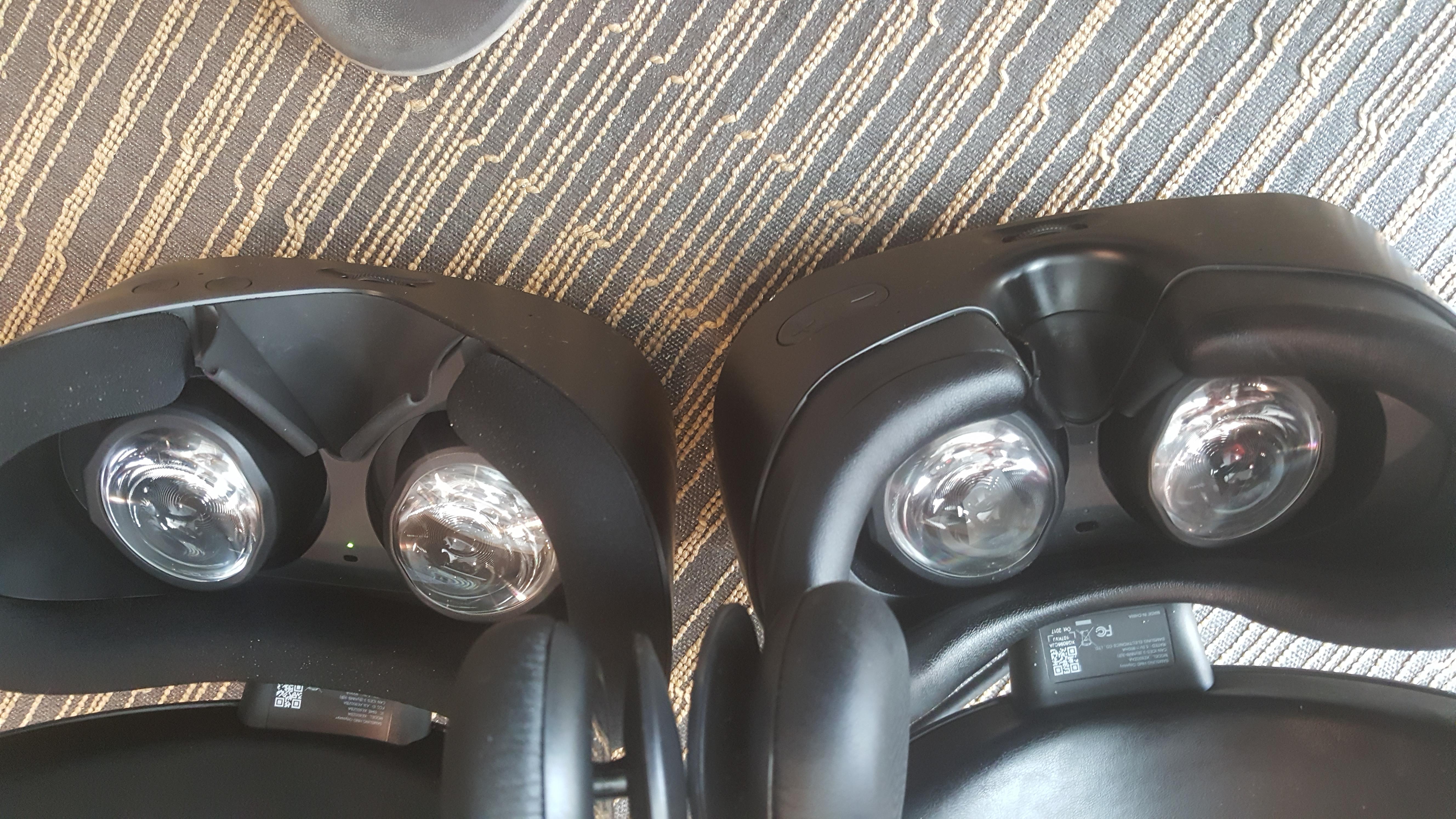 Andrew_WOT said:
Turn on the lights and run room setup wizard in WMR Portal, not SteamVR.
Make sure you have beta of SteamVR and Mixed Reality for SteamVR, there is a checkbox in app prefs.
After that enable reprojection.
https://steamcommunity.com/games/719950/announcements/detail/1652133167137673234

Man, you really did a nice job with this little manual...
I'll try these settings tonight.

I have a question: did you noticed the audio with OpenVR isn't "3d" ? I noticed the audio is "fixed" in the same position, if you rotate your head to the sides, the audio still fixed to the regular stereo and it didn't come with you head movement..

It does, never noticed that myself, need to double check?
Did you try enabling Windows Spatial sound for HMD in control panel.
https://docs.microsoft.com/en-us/windows/desktop/coreaudio/spatial-sound
Win10 October update also added option to mirror HMD sound to desktop speakers, did you turn it off.

BTW, does it work in other HMDs? Is it AC issue as I distinctly remember positional audio in Fallout 4 VR.

Andrew_WOT said:
It does, never noticed that myself, need to double check?
Did you try enabling Windows Spatial sound for HMD in control panel.
https://docs.microsoft.com/en-us/windows/desktop/coreaudio/spatial-sound
Win10 October update also added option to mirror HMD sound to desktop speakers, did you turn it off.
Click to expand...

Thx for your reply,

But, yes, my spatial is on... When I tried AC with Oculus Rift output, it works perfect (but I have low graphic performance)

I forgot to say

I did the config from your Google Docs and my AC has improved so much. Thanks very much.

I'm impressed because I'm using an GTX 1050 ti and is is running like an butter... Of course, PP is off, but I am having excellent graphic quality with SS 1.7.

@Andrew_WOT
Did you end up getting the Samsung Odyssey plus?
I just checked the Canadian Microsoft store and I can only find the old one still.
Z

So, is Samsung better in clarity and over all from CV1 ss-ed to 1.7/8 in AC.I am looking for Improvement, should I go for Odyssey?. I've watched a few reviews on Odyssey+, but with that new SDE technology seem to be that you trade SDE for blurry image?!

The regular Samsung is better than the CV1. The only thing I like better was the tracking.
Z

I have motion rig, and it's aggressive! Could I will have problems if I go with the odyssey? Olso I had closed the rig with black panels for no light disturbing, which can reduce odyssay's tracking....? Right?, That review bothers me a lot : I bought this head set samsung odyssay's specifically for a higher resolution sim racing experience. I currently have a Rift and love it but like all sim racers wanted a clearer view down the track and less screen door effect. The Samsung seemed like a good option. It's inside-out tracking is good enough for sit down sim racing and it has high resolution screens at a good price.
Unfortunately it's not all roses and sunshine. First, compared the rift it's uncomfortable. Particularly for racing as the strap makes a large bump on the back of your head that make it hard to sit in a high backed chair as the back of your head hits. And the way all the weight rests on your forehead (sinuses) is also less than comfortable. So the screens essentially hang in front of your face. And if they don't 'hang' just right there is no way to tilt the displays except to try and reposition the entire thing on your head. My Rift is not perfect but it feels like a baseball hat compared to this.
But once I did have it on and fired up the first thing I notice was still a very noticeable screen door effect. Not as bad but still there. The windows VR home environment was okay. It makes it easier to use your computer in VR if that's what you want to do and it was the first time I replied to an email in VR. Which is when I discovered the next issue. The very small sweet spot of the lens. While the image is sharper than the Rift as you would expect from the higher resolution screens. It's only really in the sweet spot as the lens are so blurry outside of it that it destroyers any resolution improvements in the image. It also means you can't just glance at stuff in your periphery. It's too blurry so you have to turn your whole head which sucks for reading HUD elements and so forth. Very disappointing.
I tried out some standup, room scale stuff to compare to my Rift. I'm used to the Rift controllers so the Samsung controllers felt awkward and the big rings on them felt like a bit of a kludge solution but are needed for the inside out tracking and not unique to this model. The tracking was not up to par with the rift but I didn't expect it to be and didn't buy it for room scale so I can't knock that. Right away though it was obvious that the lens pretty much ruined any image improvements the higher resolution lens might have provided. In fact it felt lower res than the Rift because of it. Also I was getting a bit of choppiness whenever I would turn quickly which is not good for motion sickness. I knew I might take a performance hit trying to run the bigger screens but these were some of the lower impact VR experiences I was running. I'm currently running a brand new HP Omen gaming rig with the latest i7 and an 11GB 1080Ti so a very capable machine.
Next I fired up the racing sims. In the sims I did feel like I had a clearer, better overall image...as I was sitting there. But as soon as I started to drive with any speed things went down hill. A lot of choppiness around corners but the worst thing was simply the blurriness of everything to the sides. I'm not sure what it is but it seems like the screens are not refreshing at the exact same moment and it causes a slight mismatch of all the details off to the sides as stuff goes rushing by. With the Rift I can pick out a sign on the side of the road and turn my head as it goes rushing by and read it clearly like in real life. Not so with the Samsung. Everything seemed to have a slight double images as if the two screens did match up exactly. Ruins the entire experience.
I spent a lot of time researching and tweaking settings and .ini files, etc... But I could never get what I would call acceptable performance from it. And then even if I managed, it was still going to have blurry lens and an uncomfortable fit. So I sent it back.
I really wanted to like it but it was very disappointing........! Is this true?
Last edited: Nov 13, 2018

I found the CV1 very uncomfortable as well. I think the DK2 was even more comfortable?
It's easy to reset positioning on the Odyssey and I imagine in the near future can be automatic? So far more light didn't help much for tracking but the improved clarity is worth the problem.
I have just deleted Oculus Home for more space.
You must log in or register to reply here.

N
Can Samsung Odyssey+ Be Configured As Microphone Only?