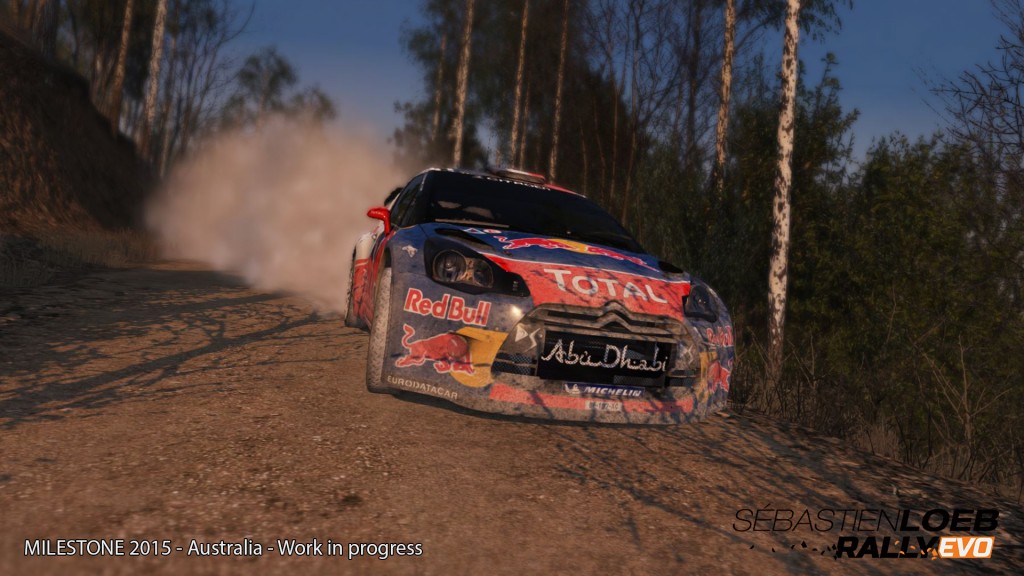 Looks like 2015 will be a slightly less busy year for rallying games. Sébastien Loeb Rally Evo has been officially postponed to "early 2016" by Milestone, as announced in a press release.

The press release does not mention the specific reasons behind the delay, but we can guess the development team wanted more time to polish the game, especially when considering the incredibly tough competition found in rival Dirt Rally.

Additionally, Milestone has published a new trailer for the game, just in time for the Gamescom convention in Cologne, Germany. The video shows several contents like a handful of Citroen cars, the Pikes Peak hillclimb, a Rallycross track and different rally stages from all over the world.
http://www.racedepartment.com/media/videos/s%C3%A9bastien-loeb-rally-evo-gamescom-trailer.10811/
Sébastien Loeb Rally Evo will be out in 2016 on PC, PS4 and Xbox One. Do you think delaying the game is the right decision? Let us know in the comments.

It looks really really stiff and dull looking at the incar view. And what on earth is that RX track? It is wider than an airport landing ground...

Also, watch the part with the car jumping. No suspension dynamics, it just... Lands.

I am guessing Milestone will produce another mainstream title for some casual fun on consoles...

No delay in the world can help on PC where DR will shred this to pieces, is my guess.

They can delay it until the end of time and nobody will miss it.

They should just asume defeat. What a piece of sh*t. I want to believe not even casual players like it.
B

buy it in the bargin bin
M

Richard Eriksson said:
And what on earth is that RX track? It is wider than an airport landing ground...
Click to expand...

Premium
"Don't poo on a cat just because it's not a dog".

From the official website: "Sébastien Loeb Rally Evo is a new off-road racing game experience"
They don't even stress the term "sim" anywhere on the site. (At least i didn't see any)

So, for a rally game, it can still be a good title
T

What a cartoonish driving experience and a toy-like dynamics... It doesn't seem to have anything to do with RD at all.
If the delay notification signifies Milestone considering all the previous responses and taking a year to make a sim out of it, then it's another matter.

The thing is, it is still obvious that Milestone is using the same game engine, originally from a motocross motorcycle game, for this as well. This is tech they have used since the first WRC title, and is a rewrite of an engine for a quick paced action motorcycle title.

They need to take the time and investment to up their tech. Given the competition, it is a shame they put the cash on licensing instead. I think they DO have talented guys in development, some of the stuff they squeezed out of WRC3 was not that bad.

But if they keep using this dated tech, inappropriate for rally racing, and creaky at best, they will suffer...

Would be better to step back, work on a new rally engine and resurface stronger.
T

I really doubt the modern Milestone can pull that off... A rally engine is a very complex software product. It requires a level of dedication rarely found in profit-oriented mainstream developer teams. I'm not entirely sure Codies will make a proper sim out of DR yet, even though they are on the right track. But Milestone? Not a chance... Back in the 2000 they could do that. Not now, however...

RBR will live forever anyway And who knows what those people of gRally will come up with (and will they ever?).
T

I guess they finally had a look at Dirt Rally and realized what piece of crap they had in comparison !

As Kris said "They can delay it until the end of time and nobody will miss it."

Here is something for you guys,
WRC 3/4/Evolved looked better, and WRC evolved with all assists off is a great sim. and that was on PS2...
Leob maybe you should consider giving your game to Evolution Studios instead,

The rest is arcadey games.

@Steve William, i agree on WRC Evo, great stuff... Dont agree with RBR as the pinnacle anymore though. DIRT Rally is already feeling better physics wise than RBR ever did.

RBR is plagued by a feeling of disconnect. And being overly difficult to control (technical limitations of the engine). But many people take the approach that impossible to control means realism. It is quite the opposite.

As a real life rally driver i find most RSBR cars behave nothing like i would expect. In DR they sort of do.

But RBR was the closest thing to a full on sim we had for many years. But i think we can retire it soon. Finally. It is starting to look really stiff now.

With codies getting the approvals from real drivers on the handling side for once and actually hiring rally drivers as consultants, i am confident.

They WILL retire RBR for good. The only ones to not accept that are going to be the guys that has never driven real rally but have put in the thousands of hours to be fast in RBR and therefore believe that since it took them thousands of hours it is the pinnacle of simulation.

But each to their own. I have already uninstalled RSBR from my boxes and are now only running DR. Because finally Codemasters actually managed to do something right this time
L

Don't they see this is no match for Dirt Rally? But hey, there's no harm for having rally game for kids.

They're still not dropping the simulation angle.

“Sébastien Loeb Rally EVO is the biggest project ever made by Milestone since now. We’ve decided to postpone it to focus more on the title development. This release date change will offer to the players a rally simulation that represents a higher quality on the videogame experience”, affirms Luisa Bixio, V.P. Milestone.
Click to expand...

I have to think for some crazy reason Milestone is just trolling right now with the footage they've released up to this point. I hate to sound so harsh, but I refuse to believe people in their position could be so clueless as to think what they've shown so far in any way resembles reality. Especially when, if there's any truth to what they implied in a dev diary, Loeb isn't just a pretty name on the box. Apart from graphics, they seem to be rather quiet about what's going on. But, they haven't missed a chance to throw out words like simulation, true to life, and realistic. And so far the two sides aren't balancing out (marketing and development).
You must log in or register to reply here.
Share:
Facebook Twitter Reddit Pinterest Tumblr WhatsApp telegram Email Link
46
R3E | Daytona International Speedway and 2019 Porsche 911 RSR Announced
9
WRC | Rally Monte-Carlo Discussion Thread
10
F1 | Impressive Numbers Headline 2019 Grand Prix Viewing Figures
18
F1 | Netflix Announce 'Drive to Survive' Season 2 Release Date