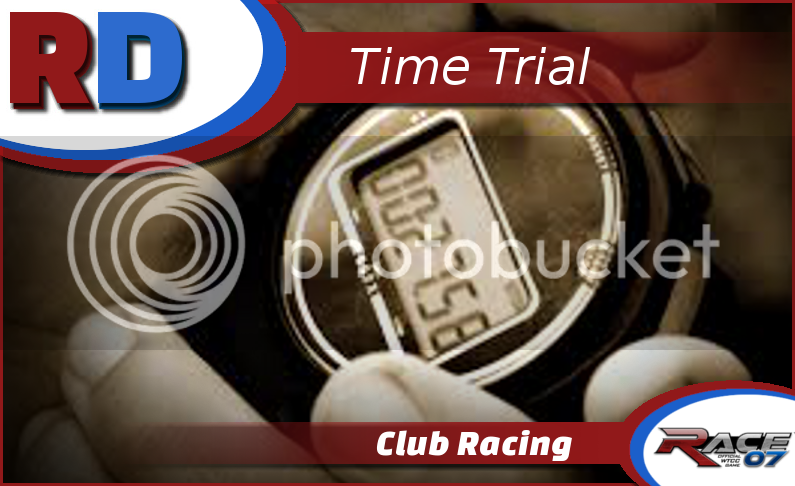 We will run a Qualifying session. "Timetrial" will allow you a running start for a hot lap. Take a peek using "Monitor" to see that no one is roaring up the hill to the last turn before you hit "Drive"!

This is a special, fun Time Trial Event. Run the course as many times as you like. Drive as many of the cars available as you like, or just pick one. As always before a Qualifying session, Good Luck to all and have fun.

I will do this too, sign me up please!

Hy Dennis. I don't get it exactly. From when to when will this event be running? Just on wednesday? All the day? (just in case I have the time...)

@Reik Major this is our Wednesday "event. A gathering at 1900 gmt or a bit earlier for some hotlapping together for Race07 fans, some fun yet competitive driving. No times will collected other than in the server, which is already up for anyone to do some preparation in advance. Hoping you can be there

What! You say you don't have a car setup for Nord's?
Here is a folder full of setups, ones with the latest dates are probably the best
https://www.dropbox.com/s/iylwyicdh83z2sv/Nordschleife.rar?dl=0

Ah sorry mate. I expected that explanation. Unfortunately I'm in a long meeting on Wednesday. Was just hoping my first guess was wrong and it would run for longer.

By the way is there a chance for another time trial? I could imagine something running on a shorter track, with only one car and maybe one or two weeks. This would give those like me a challenge, who can't run at a specific day time. And the suggested format could lead to very close gaps in the end. I could name some nice (addon)tracks if you like to but also would like many of the stock tracks. Just a thought...

@Reik Major , I'm sorry, this is the last week we will be running Race07 club events on RD. A lack of participation has brought us to a point where daily events are no longer any fun.

Ouch, this is sad news! I recently bought a one year subscription just in case I can jump into an event.

Does it mean there won't be any Race07 events in the future or will there be at least a few with a longer entry time to get it filled up? I see that the new premium system and the huge amount of events might have cost us a few drivers but having no Race07 events at all would be a shame.

The few of us that have regularly been entering events have been trying the other sims and I think all of us[the few] are ready to make the move completely. Most I think are going to Stock Car Extreme[GSCE/SCE], it seems the best option for older PC's, very multiplayer friendly and already full of old Race07 fans..

I doubt we will be able to generate a populated grid in the future and that is the reason for ...
[it's very difficult for me to say "shutting down", "terminating", "ceasing"] I feel really bad being the guy here as staff. It will be a shame.

[it's very difficult for me to say "shutting down", "terminating", "ceasing"]
Click to expand...

@John Grant I just reloaded the Wednesday server with Race 07 and GTR Evo cars only. You should be good to go.

Don't worry Dennis. I see the need to do this step. Honestly it's just the fact that I can't buy a better PC at the moment which hinders me from making the move, too.

Reik Major said:
Don't worry Dennis. I see the need to do this step. Honestly it's just the fact that I can't buy a better PC at the moment which hinders me from making the move, too.
Click to expand...

Time to go and try the Stock Car Extreme demo available here, then - the game's based on the same engine as R07, although highly optimized & modified, so it shouldn't be more demanding on system specs. In fact, it seems to be running even better for quite some people

@Reik Major
I run GSCE on an old machine 2core/Win XP/1gb nivda. Just run settings on medium you should be okay, try the demo see if it works for you.
Reactions: Reik Major

Will give it a try asap....
Reactions: Paul Bennett and Björn

Björn said:
In fact, it seems to be running even better for quite some people
Click to expand...

Story time!
Back when I was a small kid, we drove a BMW E21 - at least that's what I believe to vaguely remember and what they've told me
The first new car that I can actually remember arriving at our doorstep however, was a Seat Marbella, the sister car of Fiat's Panda. However, a stock paintjob was too boring for my parents, so they decided on something more... custom. In fact, they went for one that was featured in the promotional brochures - likely not intended to be actually used. Oh well (at the time and the age of ~4/5, this was awesome, obviously )
The car that ultimately replaced the trusty Marbella was a Seat again - an Ibiza 6K, this time colored in a more... socially acceptable way, red

Anyways - although there've been other cars afterwards, everytime a racing game offers a Seat (which doesn't happen that often), there isn't much of a choice to make for me: The Seat it is.
Race 07 was no exception and thus it was the Leon that I drove both in that one single player career and at my first RD event and many events since. Hence, it seemed fitting to pay tribute today, taking the available Seats to Nords.
(I've also figured out how to increase the video quality, so you could also watch it over at YT or switch to fullscreen)

Thanks for the time hunt, guys, and see you at Friday's grand finale!

(Also, there was another lap of Caterham 320 craziness that I barely survived after 7:30.491 )
Reactions: Gundars

Look at the dust fly 39 seconds into the video what a quality replay, the shine on that car , oh that's right it was made from a fantastic but unloved racing sim