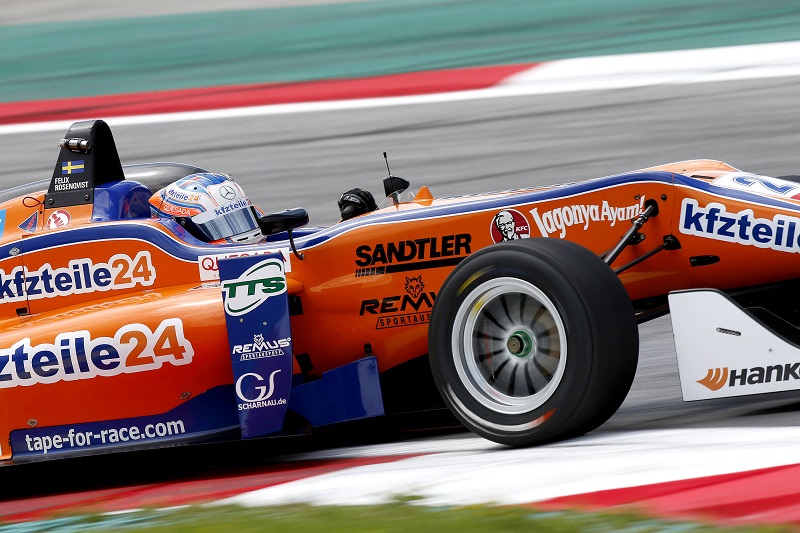 After topping the times in the Friday free practice, Muecke motorsport driver Felix Rosenqvist staked his claim for a first Macau Grand Prix victory by claiming pole for the weekend's race earlier today. After a difficult season in European F3, for Rosenqvist he's hoping it will be fifth time lucky for the Macau GP.

Row 2 will be filled with the impressive Tom Blomqvist in 3rd for Carlin with Lotus Junior driver Ocon completing the row in 4th. Max Verstappen will maybe be disappointed to only start 5th considering the great season he's had so far, with Jordan King showing Carlin are well prepared for this race in 6th.

Nick Cassidy showed his skill as he lines up 7th on his Macau debut for T-Sport, with Antonio Giovinazzi 8th for Carlin. Nicholas Latifi starts 9th whilst Renault World series 3.5 championship contender Roberto Merhi completes the top 10 for Double R racing. The other notable contender and GP2 race winner Stefano Coletti struggled in 12th for the single car Eurointernational team.

Of course from here anything can happen in Macau, with Rosenqvist already having crashed the car in free practice, and the fast but supremely narrow nature of the Macau circuit waiting to catch out any driver taking chances. It's only qualifying, although Rosenqvist, Auer and Blomqvist will all be starting their race weekend with plenty of confidence after their supreme qualifying efforts.

Awesome to see Rosenqvist taking pole. COME ON FELIX! Would be a nice completion of a minor successful season for him. He really struggled with the new direct injection engine and it's new weight bias.
I do believe Lucas Auer is still driving for Peter Mücke?
Where did they find this pace? Hope the team can carry this over to next season.
Really looking forward to the race!!!
Thank you so much for sharing @Jordan Wilkins

After a (at least for me) very interesting qualifying race with SC, lead changes and trouble, nearly nothing has changed. Rosenqvist still up front, Auer 2nd and Blomqvist with the pack hunting them down.
Only one down the order is Verstappen, who had to retire with a flat rear tire (puncture or broken rim, dunno) and broken front suspension. No idea what happened to him.

Yet again no idea. This time wondering why noone cares about this race and formula 3.
What a great race and a well deserved win for Felix Rosenqvist followed by Lucas Auer (Mücke Motorsport 1-2) and Nick Cassidy.

It was a good race, I watched it on Eurosport. Huge scary crash at the third corner where the car climbed over the top of the other two and landed on top of the tyre wall though.

The race was good, well done to Rosenqvist!

Yes indeed, I am glad they all walked away. In the end it looked worse then it was. And they need to learn about replays for next year. All the time I was just guessing what happened in the pack.

The Chinese director's coverage was terrible! Several times we were guessing what was going on at the front while he watched the rest of the pack come down a straight.
You must log in or register to reply here.