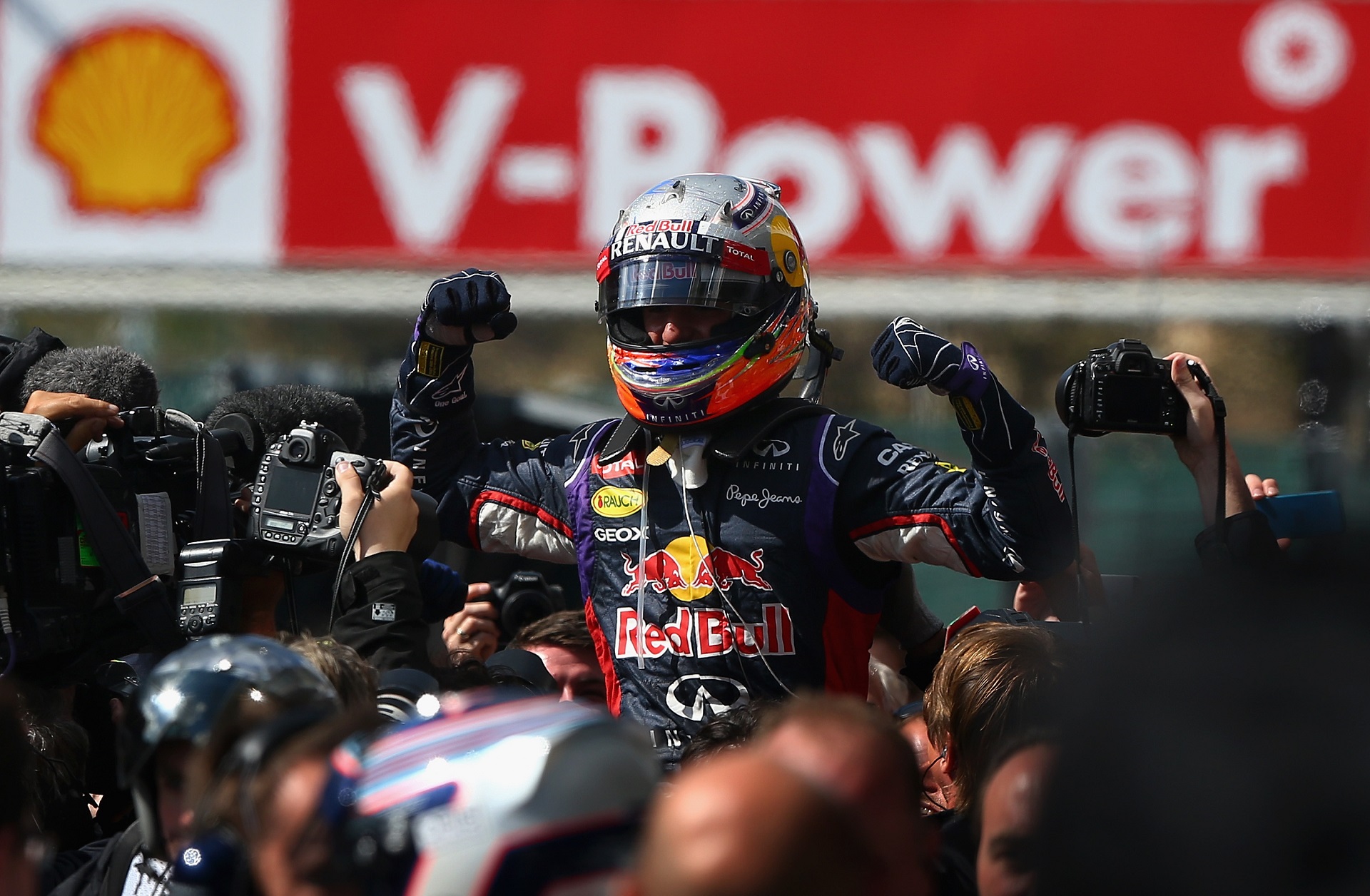 Daniel Ricciardo took victory in the forest, after a grueling race that saw inter-team clashes and action throughout the pack.

Saturday's wet qualifying perfectly set up today's Belgian Grand Prix, with the two battling AMG Mercedes drivers of Lewis Hamilton and Nico Rosberg alongside each other on the front row, with Sebastien Vettel and Fernando Alonso behind them and waiting to pounce on any mistake from the Mercedes drivers.

For Alonso, his race was derailed before the start as his engine failed to fire up for the warming up lap, forcing mechanics to rush over to his car to re-start it after the cut off time for mechanics to be on the track had passed. This obvious breach of the regulations guaranteed him at least a drive through penalty before the race had even begun, with his only comfort being the fact he kept his 4th on the grid.

At the lights it was Hamilton who made the better getaway as he swept into the lead, whilst Rosberg bogged down and found himself behind Vettel's Red Bull exiting La Source, with the rest squabbling behind them.

Before Rosberg had even thought of how to pass Vettel he was gifted 2nd when Vettel tried an overly optimistic move around the outside for the lead at Les Combes, forcing himself onto the run-off and down to 3rd. 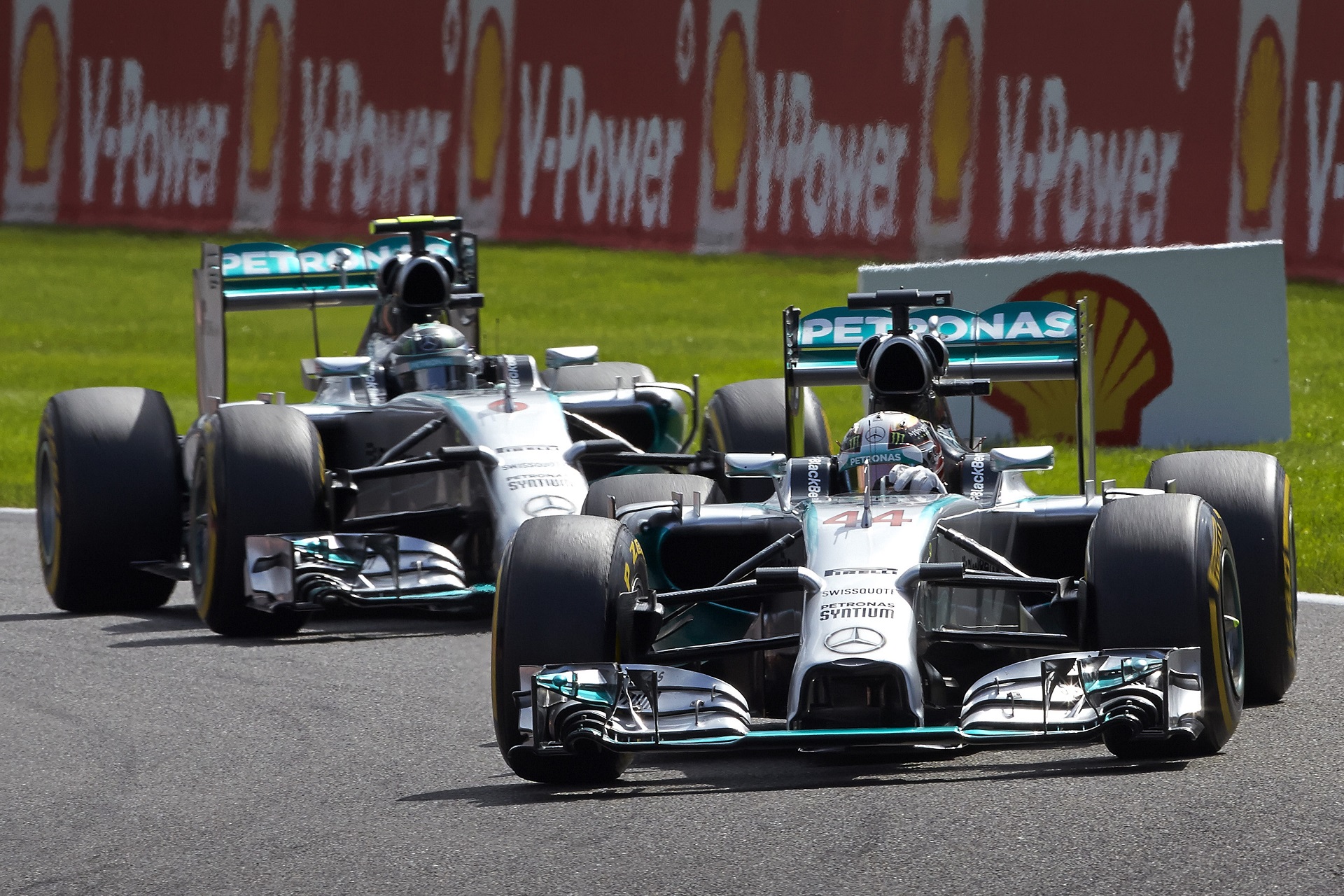 The key moment of the race occurred very early on as Rosberg tried the same move on Hamilton at Les Combes a lap later, the key difference was that Rosberg stayed on the track, so when Hamilton took the racing line for the second part of the turn Rosberg's front wing endplate clipped Hamilton's left rear tyre.

For Rosberg he lost his endplate and a chunk of downforce with it, although for Hamilton it was a lot worse as he suffered an instant puncture, with the subsequent damage returning to the pits destroying the floor of his car and doomed him to a frustrating afternoon in the midfield.

From all this the biggest benefactor was Vettel who immediately started challenging Rosberg for the lead. The man on the move however was his team mate Daniel Ricciardo, who used DRS to pass the Ferrari of Alonso for 3rd going into Les Combes on lap 4.

Two laps later and Ricciardo was into 2nd after capitalising on a rare mistake from reigning champion Vettel at Pouhon after running wide on the kerbs. The first round of pitstops began on lap 9 when Rosberg came in for new tyres and a new front wing, with the resultant long stop dropping him from the lead to 15th.

Things didn't get much better for Rosberg in the subsequent laps after a trail of discarded rubber from Adrian Sutil's Sauber flew off and caught itself on Rosberg's radio Ariel going into Les Combes, leaving it flailing in his eye-line for several laps before he finally removed it.

Sebastien Vettel pitted from 2nd on lap 11 and re-joined 8th, with Alonso also receiving news on lap 11 that he would receive a rather lenient 5 second stop/go penalty for Ferrari's pre-race antics, which he later served at his first pit stop a few laps later. 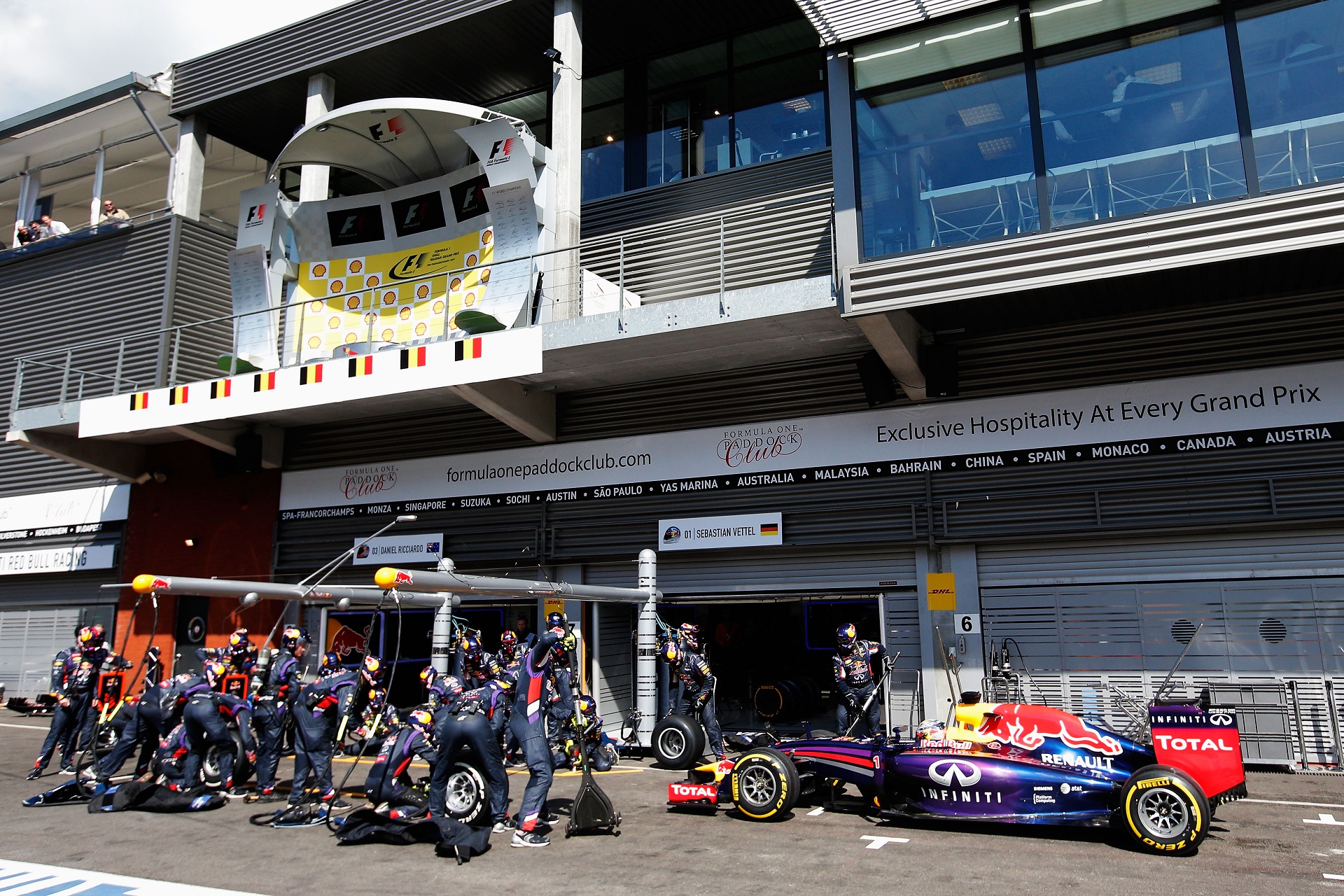 A lap later and it was Ricciardo's turn to pit from the lead, re-joining 4th. The attention at this portion of the race was focused on the battle for 3rd between Vettel, Rosberg and the lead Williams of Valtteri Bottas , who ran in close proximity before the order changed when Bottas made and easy DRS pass on Rosberg for 4th going into Les Combes on lap 17.

Rosberg again initiated the pit stop window as he pitted for the second time on lap 20 , re-joining 5th. Kimi Raikkonen in the other Ferrari was making brilliant progress from 8th at a track he loves and it a 4 time previous winner, making it up to a net 2nd with a highly impressive opening stint, which he then carried over to the beginning of his second stint on lap 22.

Vettel pitted from 2nd lap later, re-joining 8th, meanwhile Rosberg was making progress as he made an easy DRS pass on an underpowered Ferrari of Alonso on the Kemmel Straight going into Les Combes on lap 25 for 3rd. From here Bottas was clearly looking to Ricciardo as a threat as he pitted on lap 29 reacting to Ricciardo's strategy, re-joining 6th.

Lap 35 saw Rosberg make his third and final stop, as he now had 9 laps to claw back the deficit to Ricciardo with his fresh Soft tyres. Although Ricciardo had a lead of over 20 seconds, once Rosberg quickly dispensed with Bottas with a brilliant move on the inside of the very fast sweeping left hander Blachimont, he began closing on Ricciardo at a rate of roughly 1.6 seconds per lap.

The calculations had it that Rosberg would catch Ricciardo on the final lap, and behind them things were closing up also as Bottas marched onto the back of Raikkonen's Ferrari by lap 39. With only 4 laps to go Bottas made a DRS move stick for the final podium spot going into Les Combes.

The action continued in the final laps with the frantic battle for 5th between the two McLaren's of rookie Kevin Magnussen and Jenson Button, Vettel and Alonso. Despite having ruined tyres Magnussen used all the track and pushed the limits of fair racing to defend his 5th place, with the carnage this produced making for a great spectacle from these drivers, although Vettel eventually found a way by on the final lap, subsequently ending the fight between them all.

Despite Rosberg taking over 2 seconds a lap out of Ricciardo's lead in the final laps it wasn't enough as Ricciardo managed the gap, even setting his personal best lap on the final one to record a third victory of 2014, by a margin of 4.3 seconds over Rosberg, with Bottas completing the podium with 3rd. The podium is the fourth for Bottas in the last five races as he clearly shares the form man tag with Ricciardo at the moment. 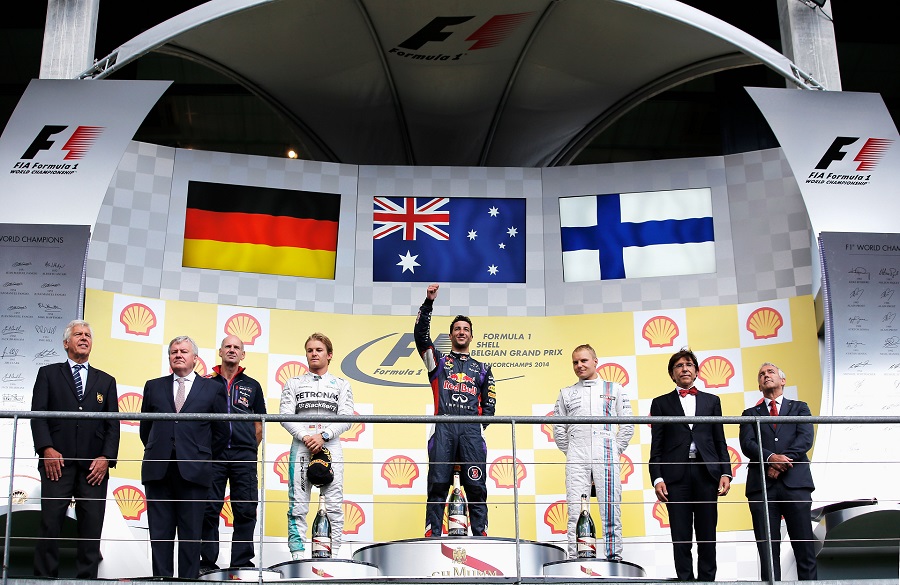 Kimi Raikkonen came home a lonely 4th in his best race of 2014, beating Alonso for the first time this year also. Vettel scampered home 5th from Magnussen who only just held of experienced team mate Button for 6th and 7th respectively. Eighth went to a hobbled Alonso who lost his front wing endplate at La Souce on the final lap, before the Sahara Force India of Sergio Perez and the Scuderia Toro Rosso of Daniil Kvyat completed the top 10.

The collision between the two Mercedes will dominate the post-race discussion with may pundits feeling Rosberg was at fault for a move many are calling a clumsy and rookie mistake. The de-brief from this for Mercedes could have a huge influence on the outcome for future races, and more importantly for the 2014 F1 drivers title.

Whilst the post race attention will be heavily focused on the collision between Hamilton and Rosberg, people should also give equal attention to the hugely impressive victory for Ricciardo, who took hold of the race and dominated it to claim a 3rd victory of 2014, putting him well clear in 3rd in the points and a staggering 54 points ahead of Vettel with 7 races left in the 2014 F1 season.

It promises to be a very exciting title showdown indeed over the final 7 races with 29 points now separating Rosberg and Hamilton, with this race only adding to the growing edge between these two friends and rivals. 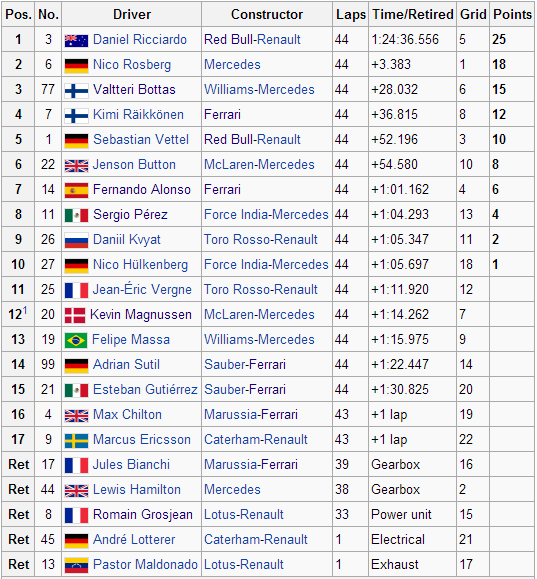 I knew Lotterer had a chance! Oh wait...

What happened to Maldonado? Having been spoiled by Sky and BBC coverage in the UK, I am stuck with a crappy NBC coverage here in the USA. I saw Maldonado was a DNF, but no mention was made as to why. I assume he didn't hit anyone this time, so did he have car problems again, or did he hit a wall, again?

Another great drive from Ricciardo and he made his best lap last when the pressure was on.
The bloke has what it takes to be WC.
D

Ken Hughes said:
What happened to Maldonado? Having been spoiled by Sky and BBC coverage in the UK, I am stuck with a crappy NBC coverage here in the USA. I saw Maldonado was a DNF, but no mention was made as to why. I assume he didn't hit anyone this time, so did he have car problems again, or did he hit a wall, again?
Click to expand...

You are so right.
The guys mentioned Andre Lotterer as the first retirement but nothing of Pastor.
NBC's coverage has just too many commercials between breaks.
In the beginning it was three...maybe four at most. Now sometimes it's upward of seven.
You must log in or register to reply here.