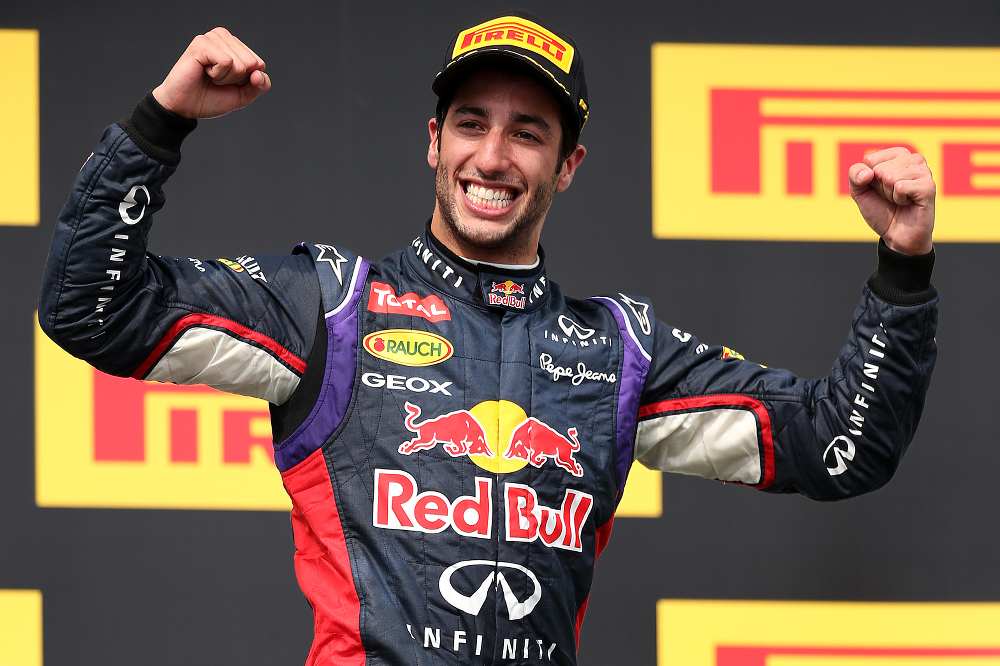 After a wet start, two safety cars and a host of lead changes, it was Daniel Ricciardo who emerged on top in Hungary.

In what has proven to be a season of sensational races, the 2014 Hungarian Grand Prix may have offered the best one yet.

Red Bull Racing's Daniel Ricciardo took the chequered flag 5.2 seconds ahead of Ferrari's Fernando Alonso in second, with the dueling Mercedes of Lewis Hamilton and Nico Rosberg following close behind in third and fourth respectively.

In a race that was almost non-stop action, the fates would conspire to ensure Saturday's qualifying performances had little impact on the outcome of the race.

Rain in the hour prior to the start forced all drivers onto intermediates, and the track proved to be extremely treacherous in the early going, as a turn 3 crash by Marcus Ericsson brought out the safety car on lap 9.

The timing of the incident left the front four of Rosberg, Valtteri Bottas, Sebastian Vettel and Alonso in the lurch as they were past the pit entry, forcing them to go around an extra time before diving into the pits. Romain Grosjean's crash just as the safety car was set to go in gave the track more time to dry, and all but the McLarens resumed racing on slicks, with Ricciardo in an unlikely early lead.

A second crash to a Force India for the afternoon would bring out another safety car on lap 23, as Sergio Perez went off along the pit straight. Upon resumption Vettel's Red Bull was fortunate not to meet a similar fate on lap 33, but with no more safety cars nor rain for the afternoon, the real action was only just getting started.

The early chaos had done wonders to shake up the field, both in terms of driver position and strategy. For the first time all season a Ferrari was legitimately leading a Grand Prix, via Fernando Alonso, while Hamilton managed to take not only second, but a pit-stop advantage over his teammate by lap 38. Ricciardo continued to lurk near the front, driving a very controlled race to ensure he would be in the thick of it at the end. 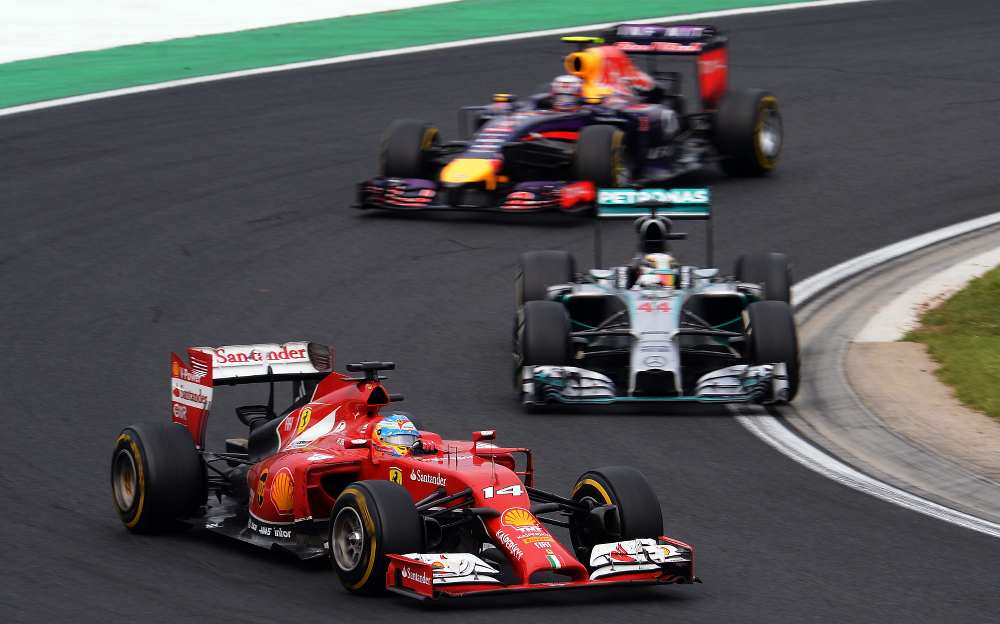 Pitting for the third time on lap 55, the Australian found himself behind Alonso, Hamilton and Rosberg with 15 laps remaining. After Rosberg pitted on lap 57, Alonso led what would turn into a scintillating three-way fight for the lead, with less than 3 seconds separating the top three by lap 60.

Despite having last pitted for softs on lap 39, Alonso managed to keep the fight for the lead at status quo heading into the final four laps, as neither Hamilton -- having last pitted for mediums a lap later -- or Ricciardo could take advantage of their DRS, nor get close enough through the corners. That changed on lap 67, when Ricciardo managed to make his second successive attempt at Hamilton around the outside of turn 2 stick, before making the most of his far fresher soft rubber to pass Alonso along the pit straight a lap later. Quickly building a healthy lead, there was still no certainty over who would occupy the final two steps of the podium.

Rosberg's more recent pit-stop for softs had him poised to put in qualifying laps all the way to the finish, and a significant gap to the front-runners would evaporate by race's end, as the German consistently lapped two seconds faster than the three drivers ahead of him. On the final lap Rosberg would get a single attempt on his teammate around turn 2, but that window of opportunity was quickly shut as Hamilton forced him wide.

Their last-lap squabble only served to highlight what was a race fraught with animosity between the Mercedes pair. Differing tyre strategies after Hamilton's aforementioned stop on lap 40 had Rosberg trailing his teammate by less than a second on older, soft tyres by lap 48, yet he was unable to make use of a team order to pass.

Despite having rapidly closed the gap to the other Mercedes, Rosberg was unable to get close enough to Hamilton through the DRS zone, while losing time throughout the rest of the circuit, eventually forcing him to pit while still behind.

Hamilton, meanwhile will leave Hungary having shaved three points off his championship deficit to Rosberg, having put on a remarkable drive that saw him start in the pit lane only to end up on the podium. After a first-lap spin left the Brit even further disadvantaged, two safety cars and a blistering march through the field allowed him to return to fight at the front, even if it was at the expense of Rosberg.

Further down the grid, Felipe Massa was able to steer his Williams to an under-the-radar fifth, followed by the Ferrari of Kimi Raikkonen, who pulled off some stellar passes to take sixth. Sebastian Vettel endured another disappointing afternoon, as he finished in seventh, while Valtteri Bottas, Jean-Eric Vergne and Jenson Button rounded out the top ten. 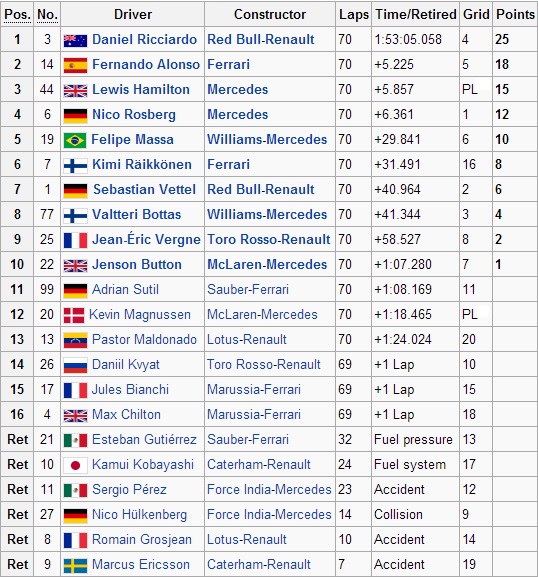 As great as it was to see Ricciardo win, I wanted Fernando to win a little bit more oh well still an amazing race, hmm next year looks like it could be an amazing year for the drivers championship, rules seem to be somewhat stable, there is very little room for aero improvements and the engines are getting closer
M

Great race! Happy for Ricciardo and once again, hats off to Lewis! Btw I liked Alonso's sry gesture at the chicane (if I'm right).

Despite it being great they both finished top ten, the safety car mixup on Bottas was very disappointing.

Impressive driving by Hamilton, very pleased he did not let Rosberg past.

This was a fun race to watch.

Premium
If only the race was 3 laps shorter. Lets hope the ferrari is good next year. Then we could have some fun with the mercs, red bull n ferrari.

Just watched it and I think I was one of 2 or 3 people thta predicted this on the poll!!

Premium
Suddenly F1 is getting more interesting again, that was a very enthralling race despite everyone saying the circuit doesn't allow passing.
Once again, the grin dominates the finger.
G

The picture of Ricciardo's face in the slider is pure win.
D

Georg Siebert said:
The picture of Ricciardo's face in the slider is pure win.
Click to expand...

Toto Wolf has aknowledged what I'm sure I was not alone in thinking.
The team were unreasonable to ask Hamilton to allow his main WDC rival past in the middle of a race that he (Hamilton) was in contention to win.
http://www.bbc.co.uk/sport/0/formula1/28517704
EDIT: Particularly in view of the fact that as far as the WCC is concerned they have an unnassailable lead. So its just now remains to sort out the drivers. Its best to let them duke it out as long as they dont hurt each other. Hamilton needed to keep Rosberg behind him for as long as possible to have a chance of racing him at the end. If he had allowed him past he was further from Alonso and in Rosbergs dirty air. The race with Alonso was over. He was also fighting Rosberg as it was following Rosbergs pit from behind. If Rosberg pitted from ahead that race was all over also.
I don't always back Hamilton and I really like Rosberg as a driver and total professional but this time Hamilton was right to ignore the order. Had he moved over he was off the podium and more points behind.
His stellar drive from pit lane after the team issued him a BBQ to drive in Quali deserved more respect.
Last edited: Jul 28, 2014
H

David O'Reilly said:
Toto Wolf has aknowledged what I'm sure I was not alone in thinking. The team were unreasonable to ask Hamilton to allow his main WDC rival past in the middle of a race that he (Hamilton) was in contention to win.
Click to expand...

It is a really difficult situation for the team, to be fair though. They would really like to win every race they can, so from this perspective, the call made sense. Also, if Rosberg was in a title fight with the guys in front, and Lewis was 80-100 points behind, Lewis would've been really selfish if he had done what he did. However, since they're title rivals, nobody could've expected him to give up that place.

So, for me, I can see both parties' point of view. Hamilton will probably admit sometime in the next 4 weeks that what he said after the race regarding that he was really shocked etc., was said in the heat of the moment, before he had a chance to analyse everything for himself. The call made sense purely from a team perspective, but equally it made sense for Hamilton to refuse the request.

To be fair, the media and the reporters are doing their usual best to yet again milk something out of a situation that really doesn't warrant it, trying to victimise Hamilton, through no fault of his own at all, for maximum exposure and tabloid sales.

I'm sure if any sane person puts themselves in Mercedes' shoes, and REALLY think about the situation, they would not single them out half as much as they are doing, for unfair treatment.

Hamilton was in contention only because of the first safety car. Rosberg had 9 seconds lead over second place and he was hugely disadvantaged by it's timing, while everyone behind Alonso had free pitstop for slicks. What also helped Ricciardo that Williams had another brain fart and put Massa on medium tire, which was much slower. He played a perfect mobile chicane, slowing everyone behind him. In these circumstances i'd put Alonso's drive as the most impressive one.
Last edited: Jul 28, 2014

I think Wolf has handled the aftermath well.
He seems a very clever and good humoured guy. (with an attractive and fast wife too).

There are many possible scenarios that we can talk about but in the scenario we have M/Benz are walking away with the Constructors and the only contest now they have to manage is the drivers. They have no WCC pressure at all and a couple of points here or there are inconsequential. In this light its hard to justify it on "a team basis".

Yet for the WDC its a tight as it can get and the only guy Lewis is racing is Nico and vice versa. To ask him to not race Nico when they did was a mistake.
It was a small miracle that Lewis got back into contention starting from the pits as he did.

and Yes Hamilton was helped by the SC but he started in the pits through no fault of his own.

I see so many parrallels with Prost and Senna. The qualifying god, who wants to win every session vs the professor.
Can one imagine Prost or Senna being asked to slow and move over?
Nico let Lewis through once or twice under Ross Brawn but they were not in a duel where one will win the WDC.

Anywat great stuff, it was a great race and I'm an Aussie so thrilled for Ricciardo. I think he has cemented himself as one of the very top drivers now. Able to battle with anyone at all.