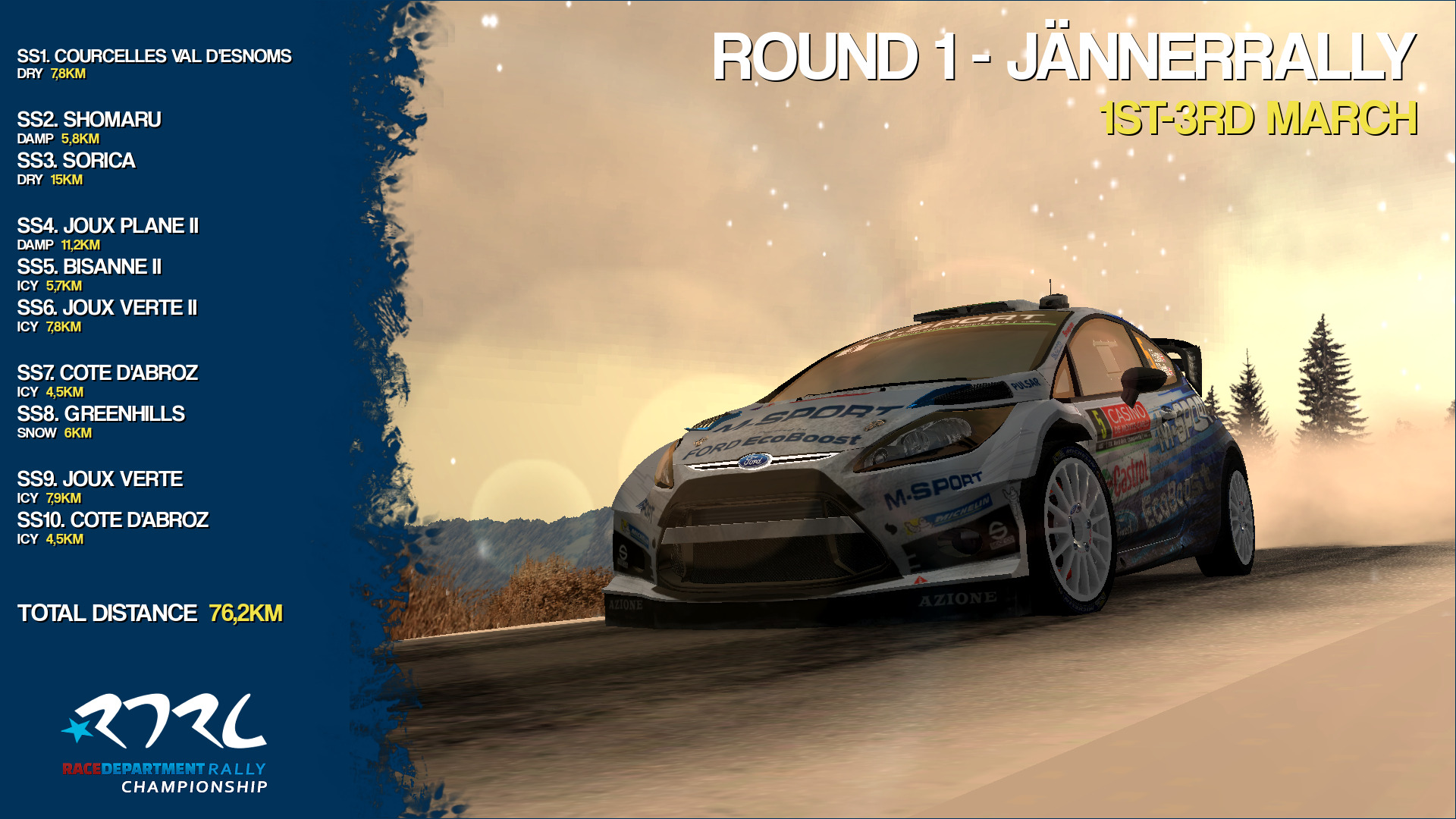 Sunday the 1st of March is the season opener for RaceDepartment Rally Championship season 7. And it takes place in cold, and sometimes snowy Austria, for the first ever RD Jänner Rallye.

Covering 10 stages, on tarmac, snow, and both at the same time. This rally is not only about speed, but about composure, and the ability to know when to push, and when to take it easy, not to mention choosing the correct tyres.

The big favourite in the first rally – and for the overall title this season, is the winner of the last two seasons, Manuel De Samaniego. The Mexican who have shown exceptional speed over all surfaces the last two years, is looking to be historic, being the first driver to win three championships.
There is very hard to find a driver who can challenge De Samaniego this season. The only two driver who have beaten him over the course of a full season is Magnar Haarstadsveen and the late Fernando Agapito. And with Magnar choosing to drive a Ford Fiesta R5, and not a WRC car this season, it seems unlikely that anyone will be able to come close to De Samaniego this season.

The drivers that seems likely to be fighting for the top postions behind De Samaniego is Magnar Haarstadsveen in the R5 Fiesta, together with the two Croatians Emil Pribanic and Dubravko Sparovec who fields a MINI RRC and MINI WRC. Both have shown stellar pace before and are absolutely drivers who can be in the top when the championship ends. The last challenger for the 2nd place overall seems to be Norbert Serban in a DS3 WRC. The other drivers that can end up high at the end of the season is John Cunningham in a DS3 WRC, Erik Tveit in a Polo WRC, Jack Hintz in a DS3 WRC, Attila Kiss in a DS3 WRC and Michael Nelson in a Fiesta WRC, but these drivers have often lacked either speed or stability.

In the second class of the Championship, 5 of the top 6 from last season have moved up to RDRC, and therefor last season’s 2nd placed man, Magnus Lindgren, have to accept that he is a big favourite for this season in his Peugeot 207 S2000. Lindgren have showed great progression over the last 3 seasons, and are expected to keep progressing. This class have by far the most drivers, and as this class welcomes all the new drivers to the championship. It is filled with unknown quantity, that are interested in making a statement at the Jänner Rallye.

In the Gr.A Cup (with old Gr.A cars) both number 1 and 2 from last season returns, in Jonatan Åcerclinth and Ole Marius Myrvold, both are expected to be able to put up a good fight also in this season. However, they are joined by 6 other drivers, where Tommi Ojala and Oscar Hardwick are expected to put up a solid fight for the title.

In the end, Season 7 looks to be an amazing championship yet again, with 14 professional graded drivers competing for the overall championship and 32 amateur drivers competing for the RDRC-2, and 8 of those are also competing in the Group A Cup. The drivers are evenly spread around the car classes and with 11 different manufacturers, with around 16 different cars represented, it all bodes well for a season with close fighting and lots of action!

You can read more about the championship, and sign up here.
Last edited: Mar 1, 2015
Reactions: Daniel Monteiro, John Cunningham, Nox and 10 others