Lovely. Getting Racenet error after SS10...

Same, the website still says I have time on the event but apparently it ended 15 minutes ago because I couldn't start the stage after stage 9. My fault for putting it off so late but really kills my motivation to continue the season.

chamyoko said:
Same, the website still says I have time on the event but apparently it ended 15 minutes ago because I couldn't start the stage after stage 9. My fault for putting it off so late but really kills my motivation to continue the season.
Click to expand...

Yeah, frustrating. And I was all happy I was just 4 seconds off the pace on the long SS10. Didn't even get to show it off now

Provisional Results are out! You can find them here!

As always, we have some unknown RaceNet-names, they will be listed in this post.
Drivers on list list, have until Wednesday 7th April 04:51 UTC+1 to notify us about names to be included in final results.

Had some more codemaster shenanigans this week, apparently a loss of power is a result of a broken gearbox and not the engine and lost about 5 minutes because of it.

Hopefully that will be the end of the shenanigans going forward and be able to pick up more points.

Yay! Points for me

Missed Apex Racing with its first double Top 10 finish of the season: @Michael Springer in P8 and myself in P9, great stuff!

P3 and PS points for me in RDRC-2 in the location, where I was hoping to just make it to the end... what a nice easter surprise!
Paul in P6 makes it great for the team and him!
Viva Espana!
S

Delighted to get my first class podium after my puncture in Poland cost me 3rd there!
L

Backmarker EB said:
imagine hitting the last timing line of the power stage and being given a DNF.
Click to expand...

Ooof! That hurts! Just looked at the timing, you had amazing pace in the stratos

P2 overall and P2 on the power stage in what I thought would be my worst rally
Maybe I'm actually not so bad on tarmac.

First time on the podium and it's time for champagne!

First J-RDRC podium here too. Can't believe my times hold 1st place for a while, before Lorenzo came to obliterate them all! First rally with almost no mistakes for me, only minor ones in the end. Turns out driving without damage really help after all

Congrats to all participants, cant wait to be back at the back in New Zealand.
Last edited: Apr 5, 2021

Roland said:
Actually.. it's becoming more and more obvious that the weakest link in our team is.. err.. well...ehm...

CYA next time (if I don't get sacked first, that is )
Click to expand...

Sacking a driver that's scoring points multiple times? Are your team run by me in manager-games?? 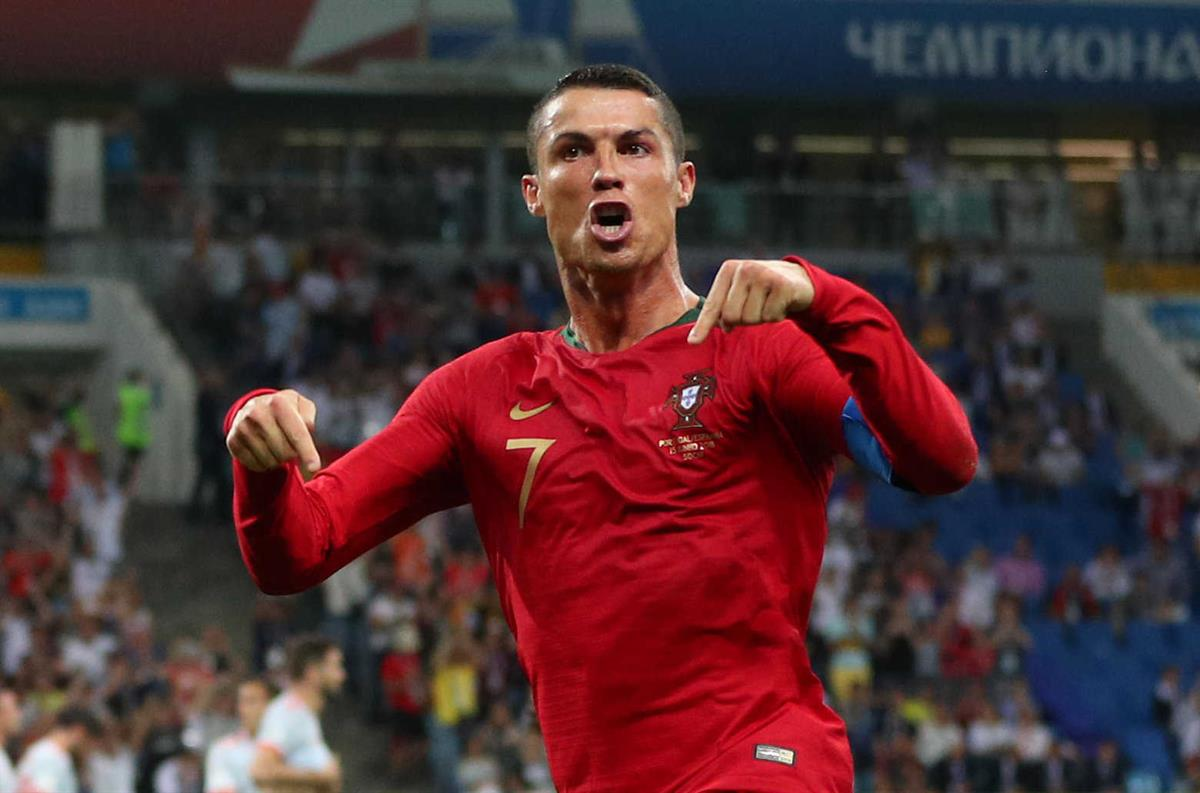 Joakim Skalstad said:
Yay! Points for me
Click to expand...

We had such a good battle in the middle stages but unfortunately on SS10 I almost totalled the car and lost a few minutes in the process!

A bittersweet rally for me, probably the best pace I have had all season, or at least since Monte Carlo but I wasn't cautious enough on the stage I hadn't practiced and the same corner caught me out on SS6 and SS10. Threw caution to the wind in a vain attempt to recover something and score Power Stage points but managed to use some armco as a ramp and become a stunt driver!

I think if I manage to score points in either of the last two rallies it will feel like a victory at this point - keep getting foiled by my ineptitude...

ltnordb said:
Ooof! That hurts! Just looked at the timing, you had amazing pace in the stratos
Click to expand...

Backmarker EB said:
thanks man.
it was gonna be close for the win, i was down on the top power stage splits by only 1-2 seconds before the incident, but oh well... ¯\_(ツ)_/¯
Click to expand...

tbh i found it more hilarious rather than disappointing. i’d be heartbroken if my dnf came from my crashes in stages 10 or 11 instead

Backmarker EB said:
tbh i found it more hilarious rather than disappointing. i’d be heartbroken if my dnf came from my crashes in stages 10 or 11 instead
Click to expand...

If nothing else, that's the way to look at it I guess!

Time for the picturesque review of the rally!

It started really well on SS1. I felt like I was being too careful having only done one single short practice stage before the rally, and it wasn't even SS1 I did as a warm-up. That would be too smart and logical to do... However, the stagetime in relation to my competitors were a lot better than expected.
The Easter-BMW was flying! 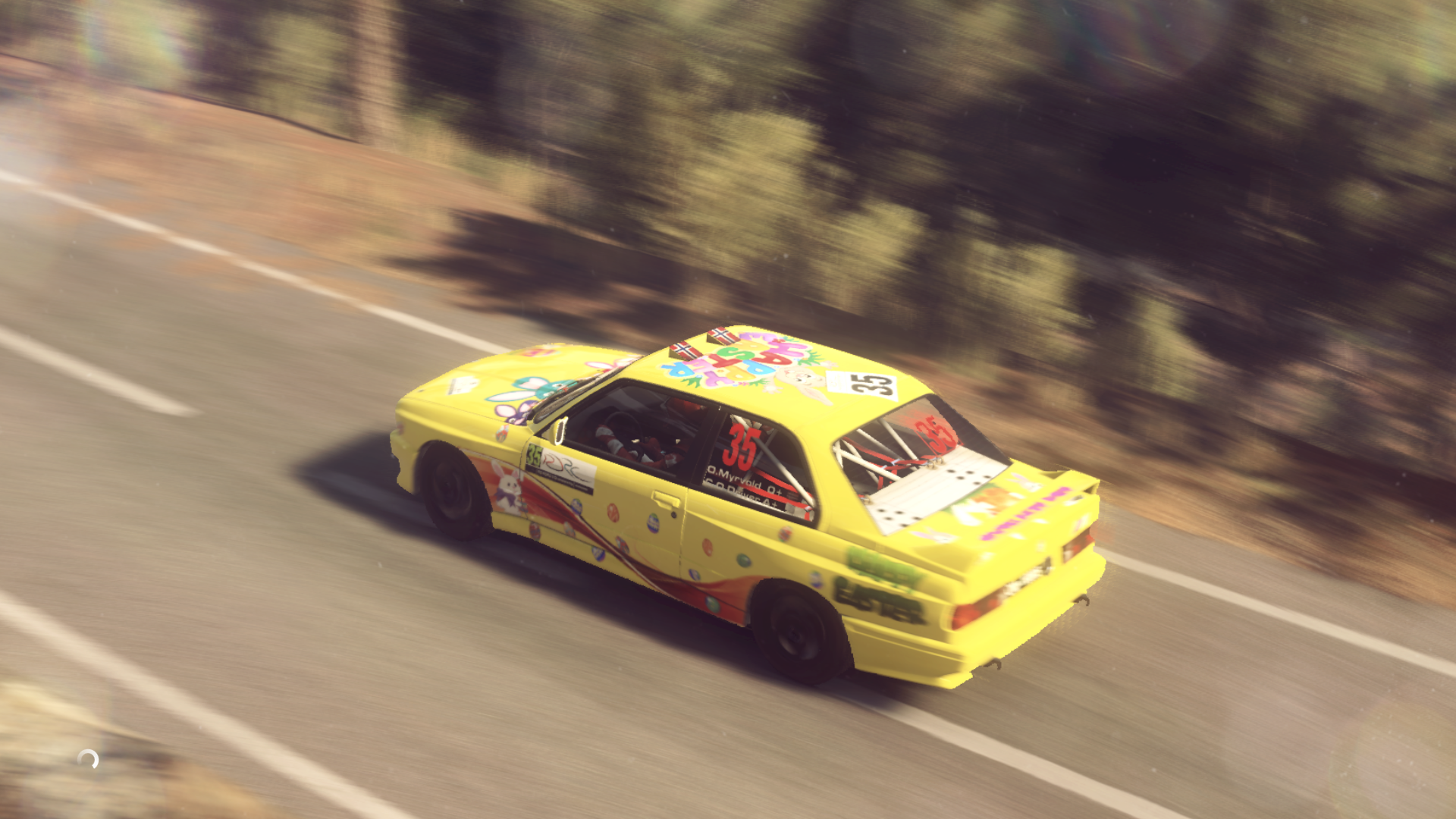 The problem was, as can be seen far in the distance, on SS2 it was literally flying... Doing my best to emulate Tony Hawk and sliding on the rail. Not very effective. 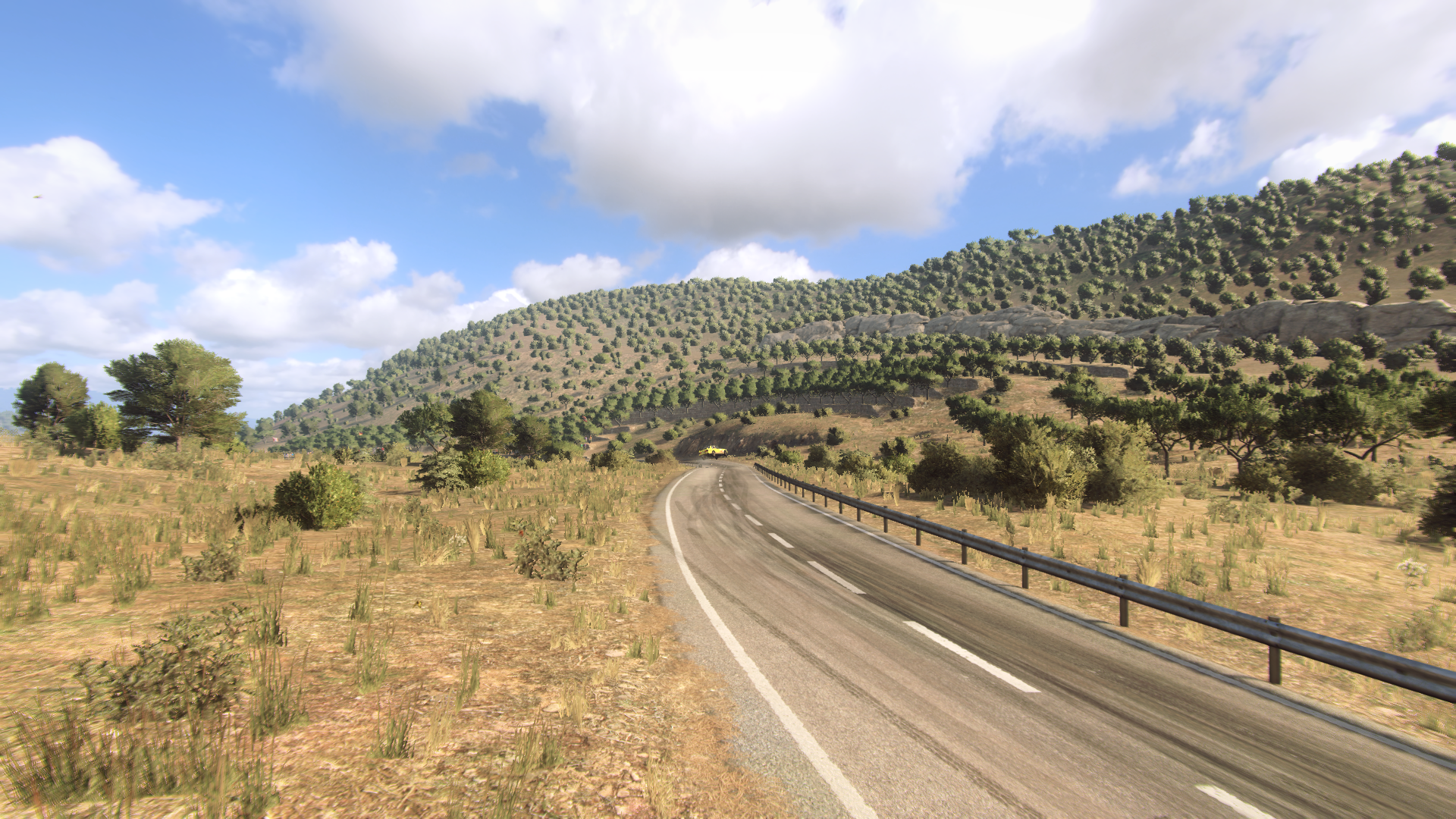 This caused a front right puncture, and with a very fast section of the stage remaining, this wasn't good. But taking a minute to change it would be even worse. The BMW did look a bit sad though.
Here captured just mere tenths of a second before going off, again! 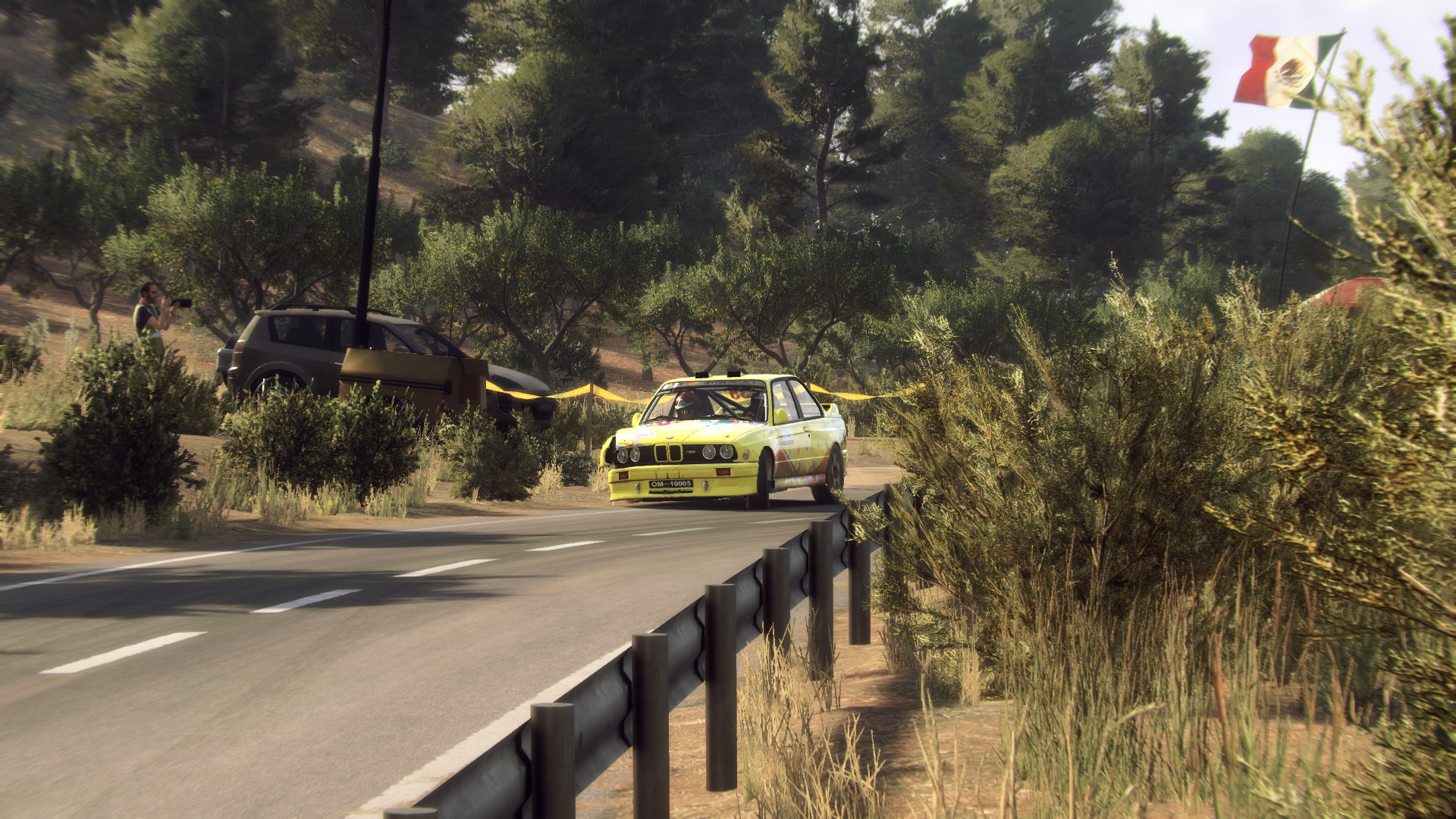 And then on it's side, luckily it fell down to it wheels, so I could continue with only standing still for 2-3 seconds. Shorter than calling for help. I guess trying to jump down from the banking on the right side wasn't the smartest call I've done. 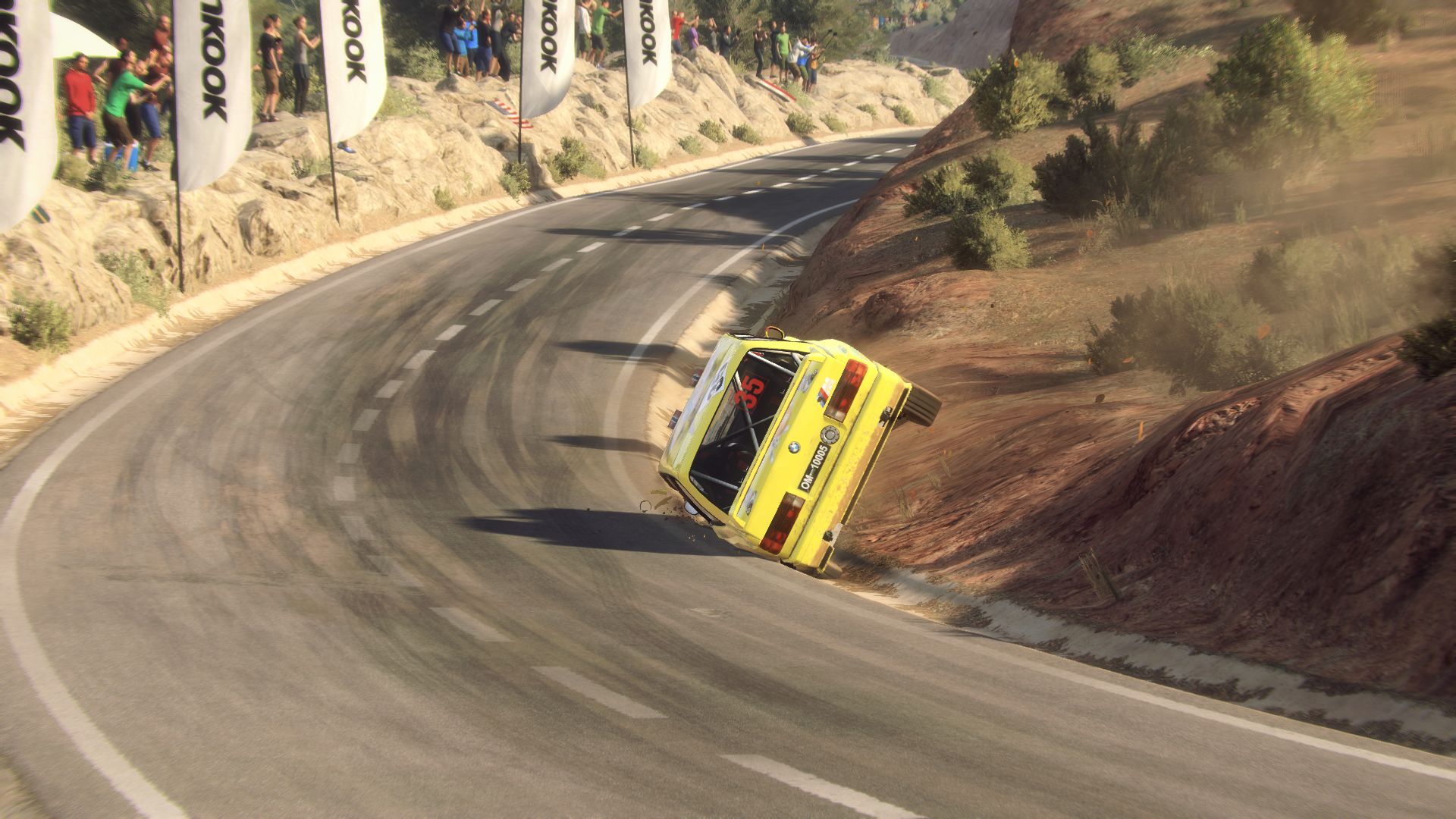 With the short service coming up, I was only able to fix the radiator, lights and the bodywork. Fixing the wheel geometry or exhaust would give me a huge penalty. So the BMW looked good, but didn't drive as good or have as much power as it should've had. 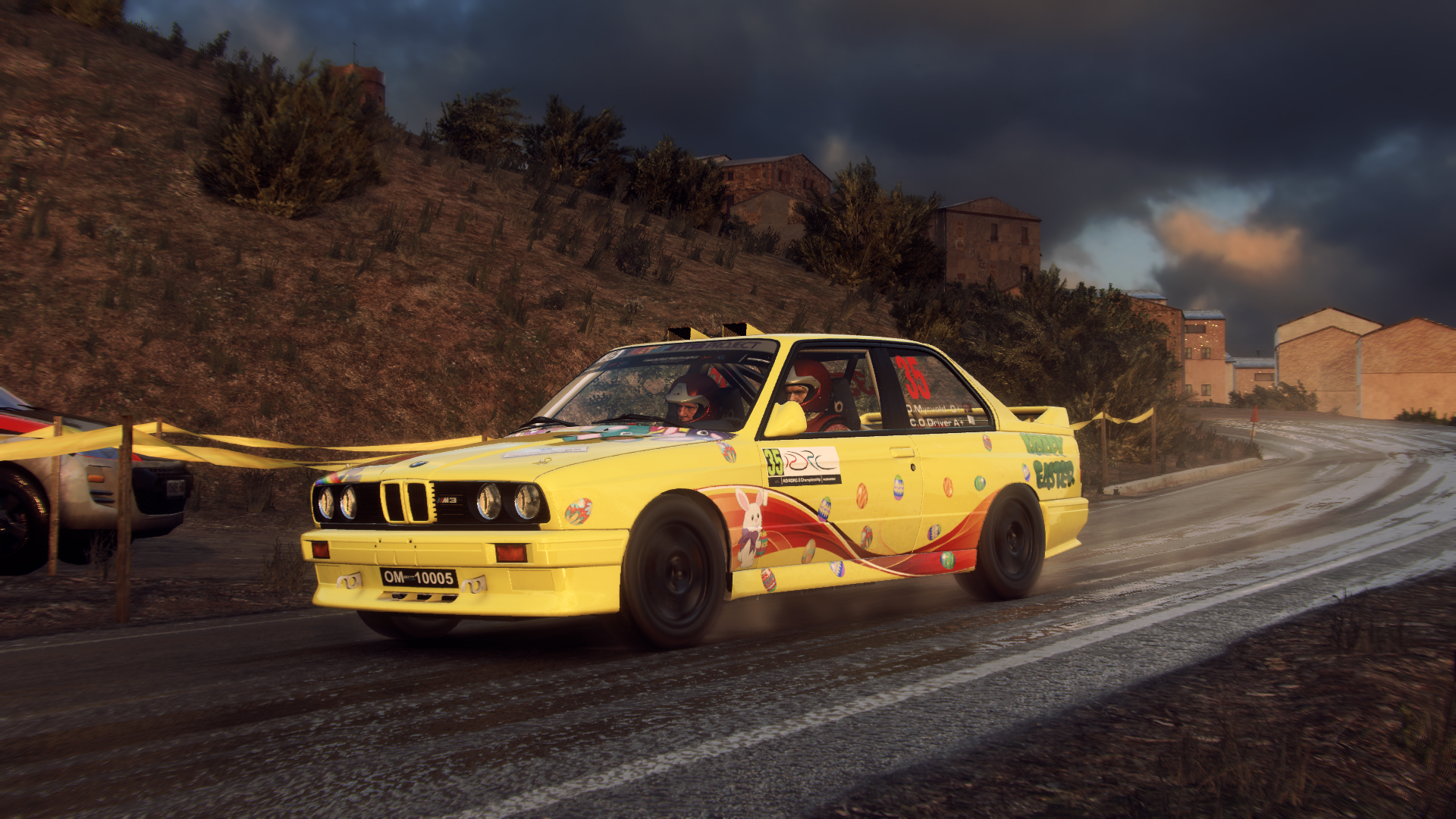 But as I said. It looked good! 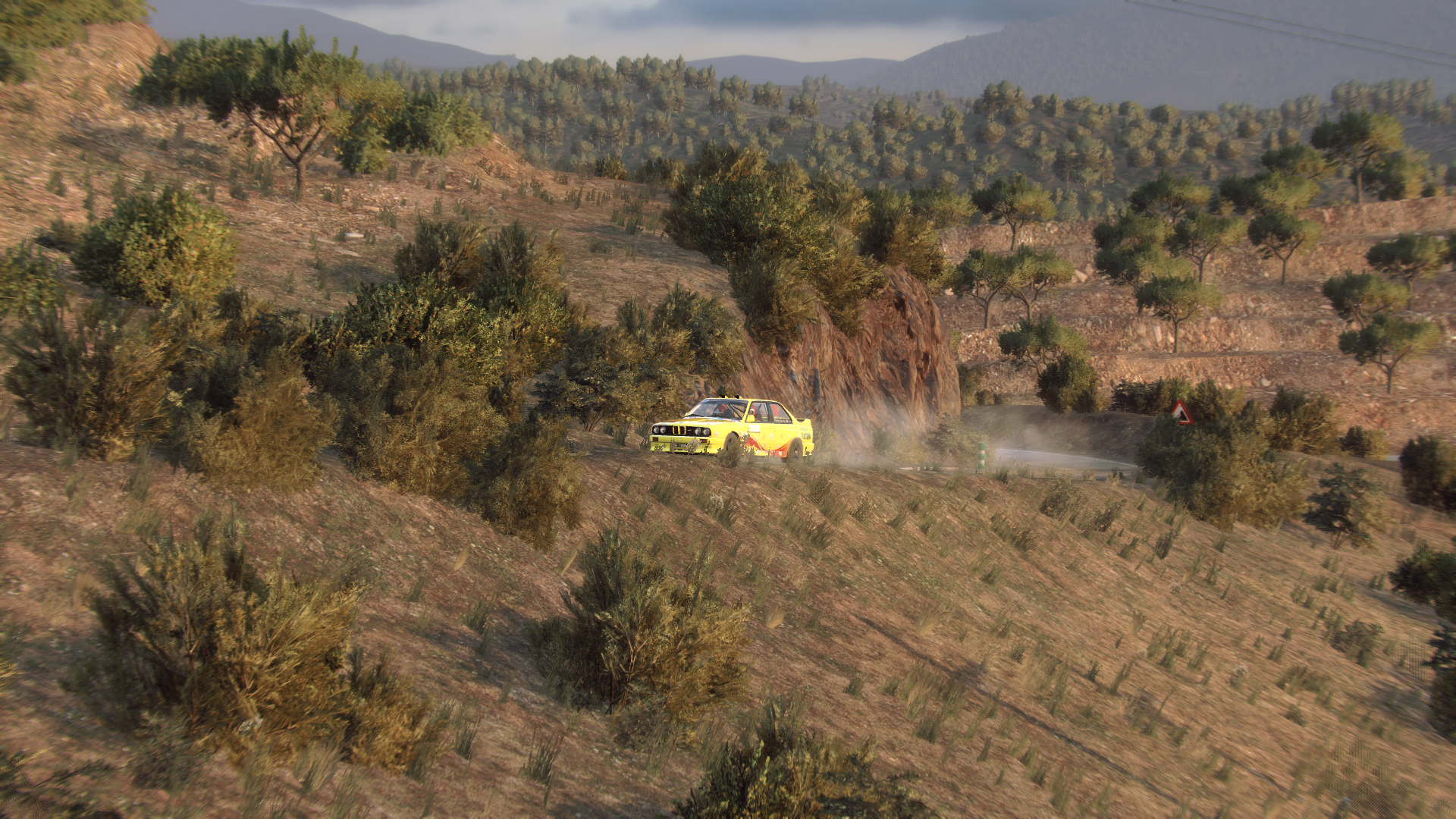 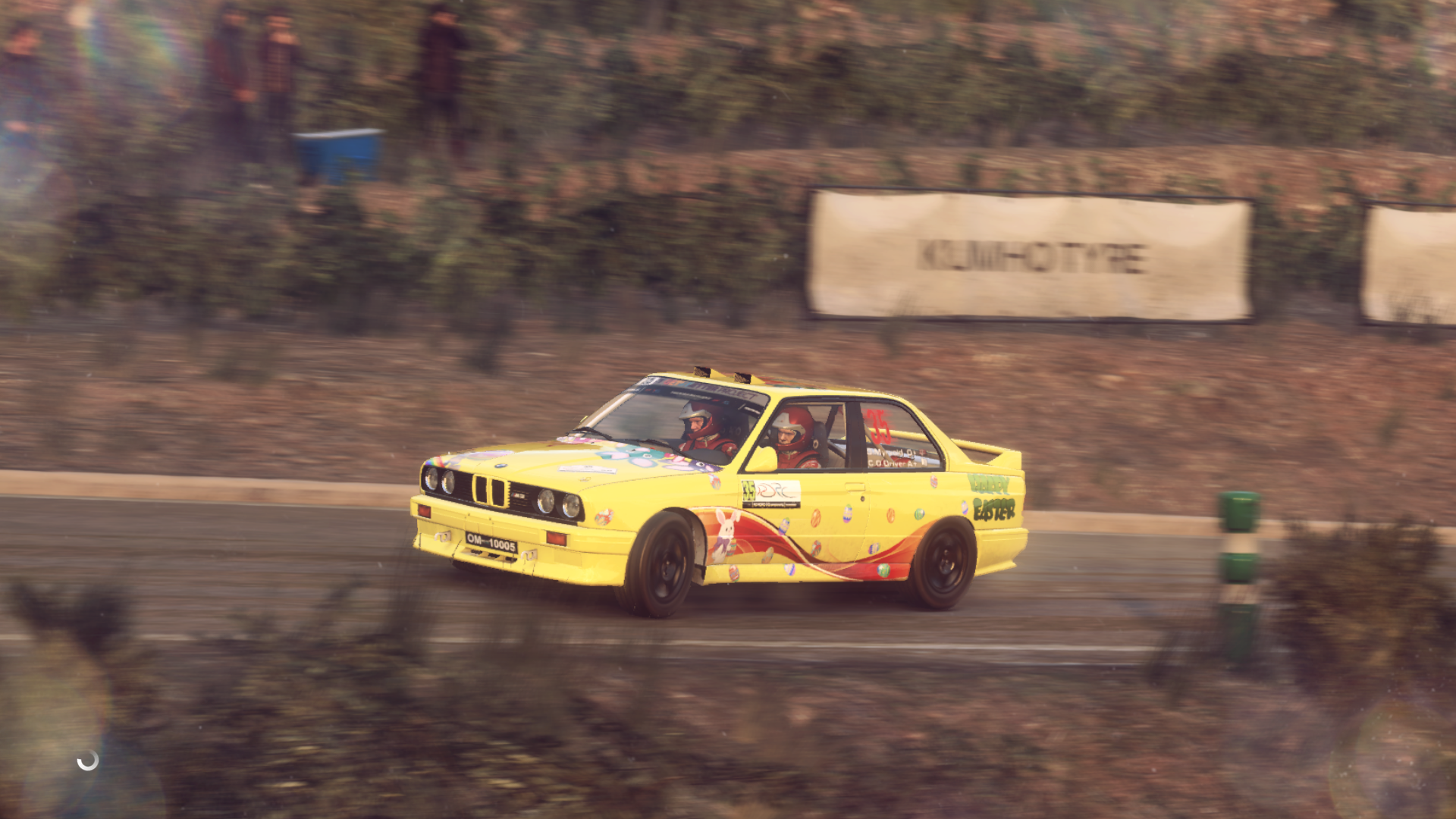 Then after the overnight service, the whole car got fixed. And the rest of the rally was pretty much uneventful. No real mistake, no amazing stages. Just getting through the rally on a surface I don't enjoy too much.
Nailing the hairpin though! 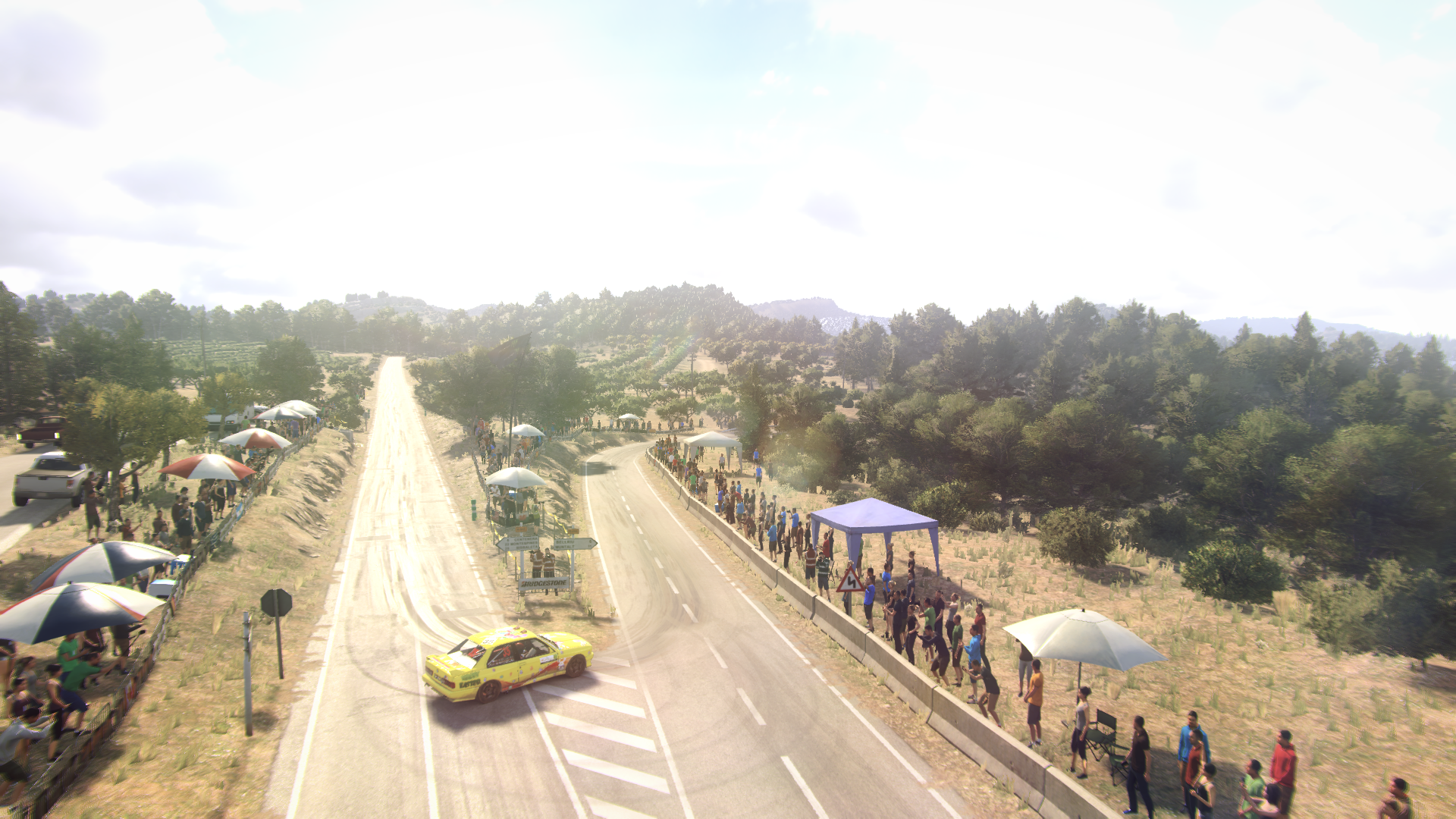 Then came the last stage. The power stage. It was the stage where I had pretended to be Tony Hawk and ruined my car at the start of the rally. I was more focused on not doing that than I was on pushing hard. The car behaved a lot differently at the end of the stage with 4 non-damaged tyres and no wheel geometry issues! Where I went off at the end of SS2 (notice the Mexican flag on the upper right side, same as my second picture), it now went sideways! Send it! 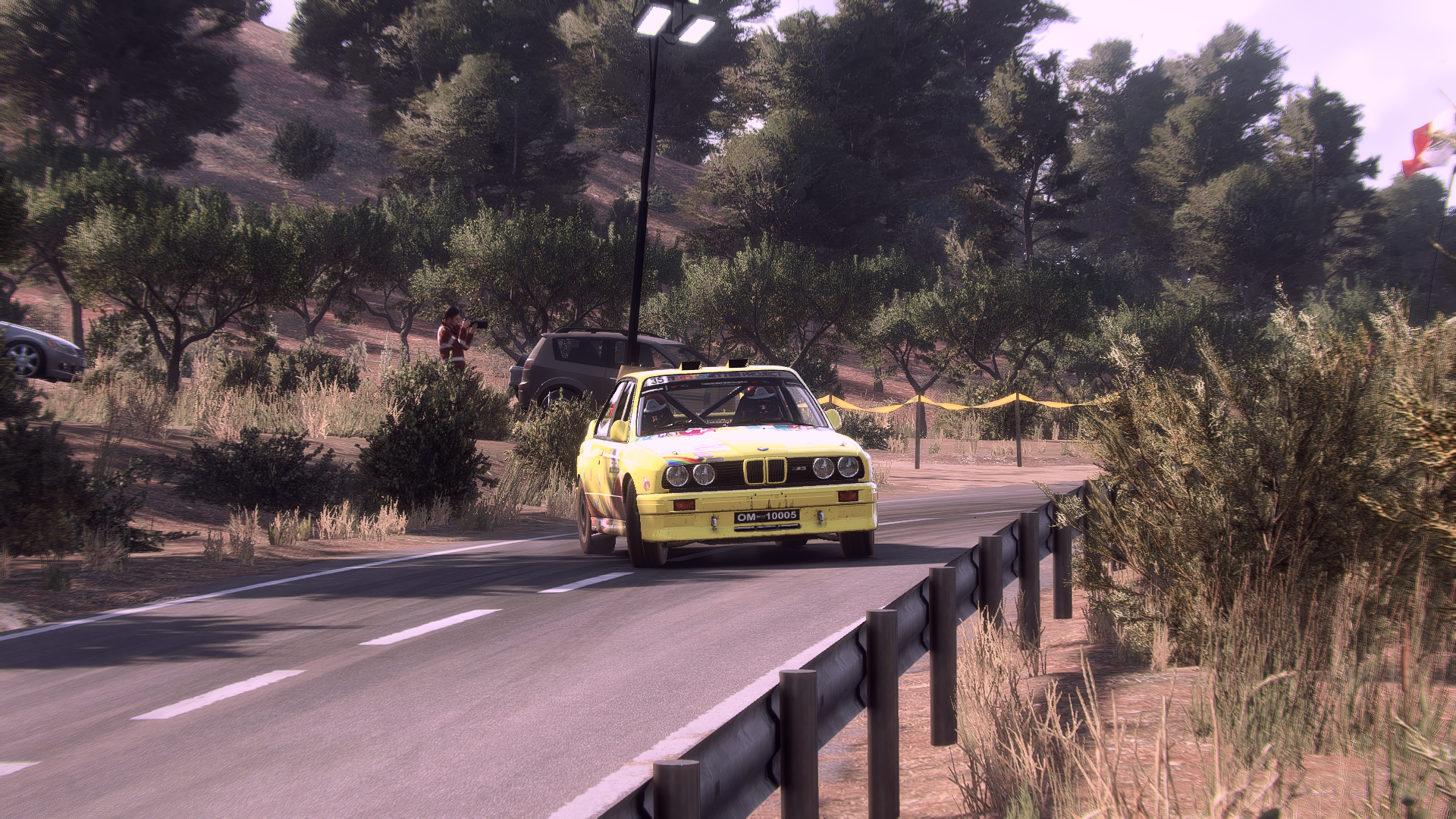 No issues though, full control and I even managed to score some bonus points! Woop Woop! 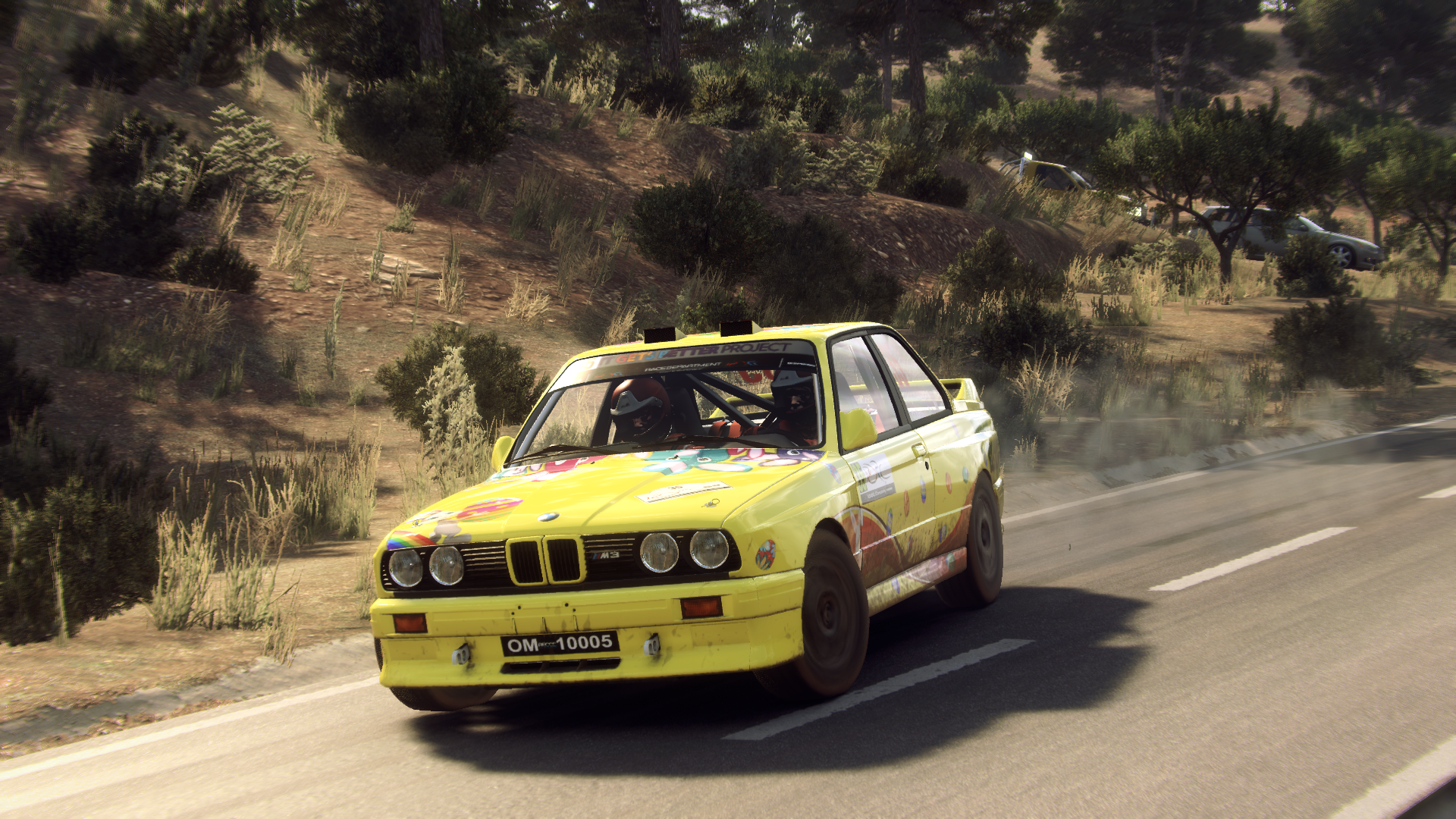 Now I should start figuring out sponsors for NZ!