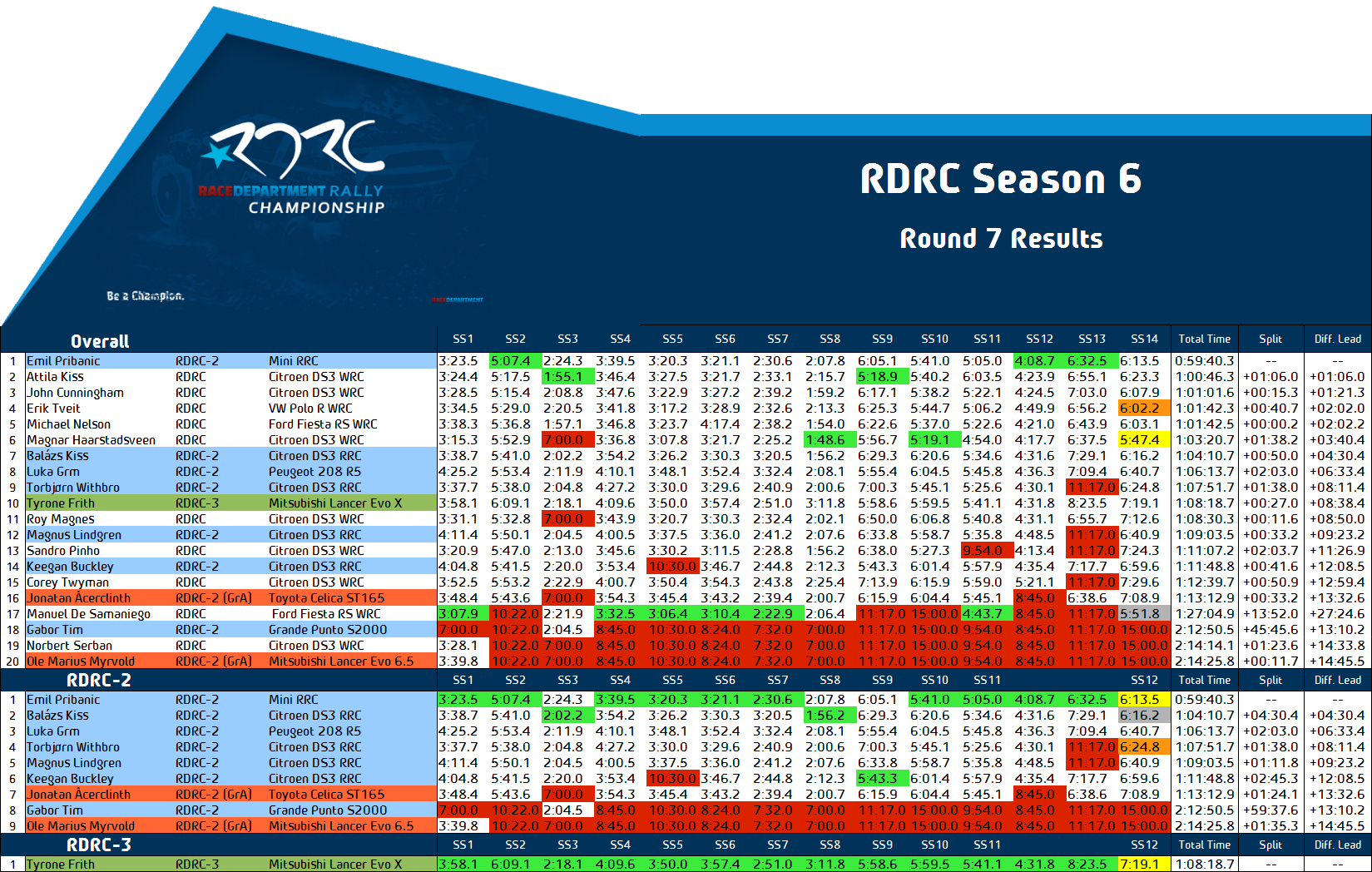 Premium
The man has landed in England! Yay!
Time to get practising for the winter series, then

Has he started working behind the bar yet? lol

Awesome, it's exciting to return to the championship, and what a better place to do so than New Zealand, we've worked hard in the summer and we have a new setup and a new engine for the Fiesta, looking forward to the roadbook.

Nice to see you're in England now Jack

Staff
Premium
Definitely a good start to the next series!
Sorry I haven't put the itinerary up yet, I am working on that now. Been so busy lately getting settled in hehe

Premium
Since I am being awesome, I did head out first on the road this rally.

SS01 - Cautious start to the event.
SS02 - Going slow, very slow.
SS03 - Missed this one because I used too mutch time on the previous one.

SS04 - Okay run, nothing more than that.
SS05 - When the cars slides sideways you can pretty mutch just let go of the wheel and wait for the car to stop before you do anything else.
SS06 - Still steady.

SS07 - A bit more attack than before, but still not the bigest push.
SS08 - Spun at the first real corner.
SS09 - Rolled the car heavily, but with minor damage.
SS10 - Dropped off the road noumerus times.

SS11 - More grip here on snow than this. Slid off the road 3 times.
SS12 - That felt like it could have gone faster with the Ecsort MkII!
SS13 - Finally a stage without any spins or crashes! Yay!

Again not the event I wanted, after playing around with other cars over the months since last rally, I just can't seem to find grip going sideways with this one.
Hopefully I'll grab enough points to keep RMI ahead in the teams championship.
Good luck to the rest of you, I guess you'll need it on this slippery surfaces

some wierd hapen to me at start EU1 sesion. Everything was chosen right, tyres and car (Mini RRC) but when RSRBR start first my gravel setup was not there but i got snow setup , then at start line my Mini become Toyota Corolla WRC....WTF.... I shot down RSRBR and try it offline and get same . When drivind at ALONE everything is ok. What now?!?!?!?!

After 20min.
Few time restarting Public Champ and now its OK but ill havw to wait for tomorow to start (if i got lucky)
Last edited: Aug 23, 2014

For some reason my practice notes had ss13 as Wet, did we change that? Note: I ain't complaining it clearly has it written in the game anyway, I am just wondering how I made that mistake.

Anywhoo, great rally, couple of crashing into solid objects flat out, with unusual for me, miraculous escapes!

No CFH, no Retirements.. no-one more amazed than me, though I did drive quite slow and was hammered by a poor tyre choice.

Thanks again to all, and good luck
jc
(as usual by 'good luck' I mean I hope all your wheels come off, cars in flames and a neighbour cuts a tree down that cuts your internet )

So, i cross finish line this time with right car with right setup. Sorry John but this time my internet worked great, my wheels were tighten well....nothing went wrong except two of my mistakes at Humalamaki but thats rally. Great rally afterall. Tnx to organizers who work hard to all this make it rolling. Unlike John i wish you great driving like i had and all luck to come to finish. See you all (at points table)

On a side note: having not driven for a while... bloody hell this game is still fookin awesome. First few stages in practise I got the sore eye thing from not blinking, nearly ripped the wheel of the table and could barely make it up the straights let a lone the corners.
Brilliant game. Will it ever be beaten???

John Cunningham said:
On a side note: having not driven for a while... bloody hell this game is still fookin awesome. First few stages in practise I got the sore eye thing from not blinking, nearly ripped the wheel of the table and could barely make it up the straights let a lone the corners.
Brilliant game. Will it ever be beaten???
Click to expand...

Other side note:
Graphics seams outdated BUT physics is outstanding in RB compared to other rally games.. New stages are awesome. Humalamaki is a great stage with breath taking jumps Long stages like BTB Ouninpohja on 30km+ nearly fried my aging Logitech G25. Had to pause game midway becouse of burned smell
looking forward to run this round tonight.

Withbro, if you dont mind ill join you tonight cose i drive last night alone and its suck driving alone

Great to return to the RDRC, with my home event. Got a good result in the final round of the winter series, now I've got to carry that momentum forward. I've inverted my pedals, and have a very nice feel with the car now, so I'm gonna take a relaxed approach to this rally, driving as clean as possible with as much pace as I can.

SS1-I always get nervous at the start of a rally for some reason, and I was quite tense here. Not the best run through, I had a spin in the final sector and had to turn my car around, lost quite a lot of time there.
SS2-Had a mistake in the beginning where I just clipped the lip of the roadside and rolled my car, I was praying I'd miss the marshals which I knew were incredibly close, and that I'd land on all four wheels, which I managed too. Asides from that, the stage was quite nice. I need to calm myself down a little for the next few stages.
SS3-OK. Much better feeling, more relaxed. Went a bit wide on one corner, but managed to avoid any troubles.

SS4-Really nice feeling there. Happy with that one.
SS5-Again, pretty good feeling. Had a very close call with some trees at the beginning, was almost waiting for a thud, but it never happened.
SS6-Argh, disastrous stage. Clipped a tree in the beginning and damaged my steering pretty heavily. Car was snaking all over the place. I managed to nip a marshal a bit later in the stage as well. I'm glad this was the last stage on the loop, because that steering damage was horrific. So's the stage time, but eh, better than retiring.

Not the best starting loop, gotta refocus for the next loop.

I really like legs where you must compromise on the tyres. I've decided to go with inters instead of full wets here, I think the time loss on Falstone won't be as bad as the possible time loss on East-West

SS11-OK. Got distracted by a phone call in the middle and went a bit wide at a hairpin. Didn't lose too much time.
SS12-That was always gonna be tricky. Lots of understeer. Lots of short shifting. Not too bad though.
SS13-Felt pretty good. The forested sections were good fun, felt a lot of grip in them, but out in the open I struggled a wee bit with understeer.

OK, well the second part of the rally has gone a lot better than the first for me. Only the power stage left to go, and in the wet the final sector of this stage is going to be a nightmare. I've gotta make sure to keep it on track.

SS14-Good. Had a lot of fun in the twisty section for some reason, even though I normally don't like it. No mistakes, pretty happy with my time.

Overall, an OK to good rally. The first 6 stages were rpetty so-so, didn't feel comfortable and made some mistakes. The second half the the rally I thought was really good, I had a great feeling in the car, and the times seemed pretty good too. Looking forward to seeing the results for this one.

Good luck all those yet to run. 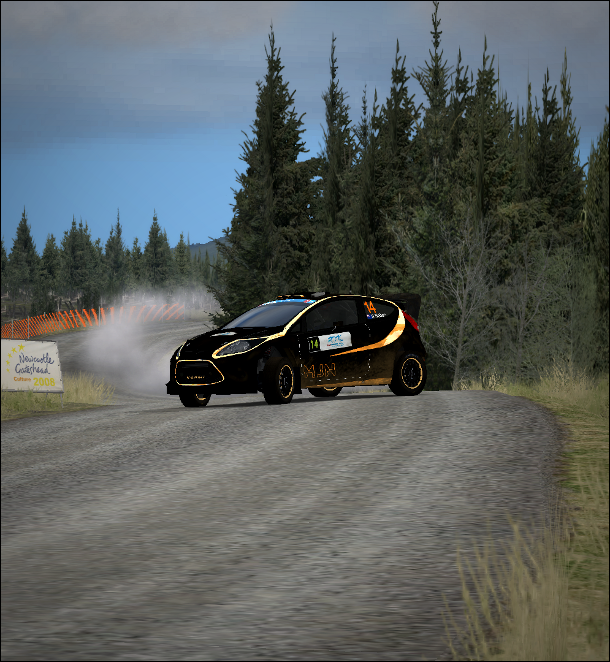 i having problem logging in the password not working

Did you use NEW pass?