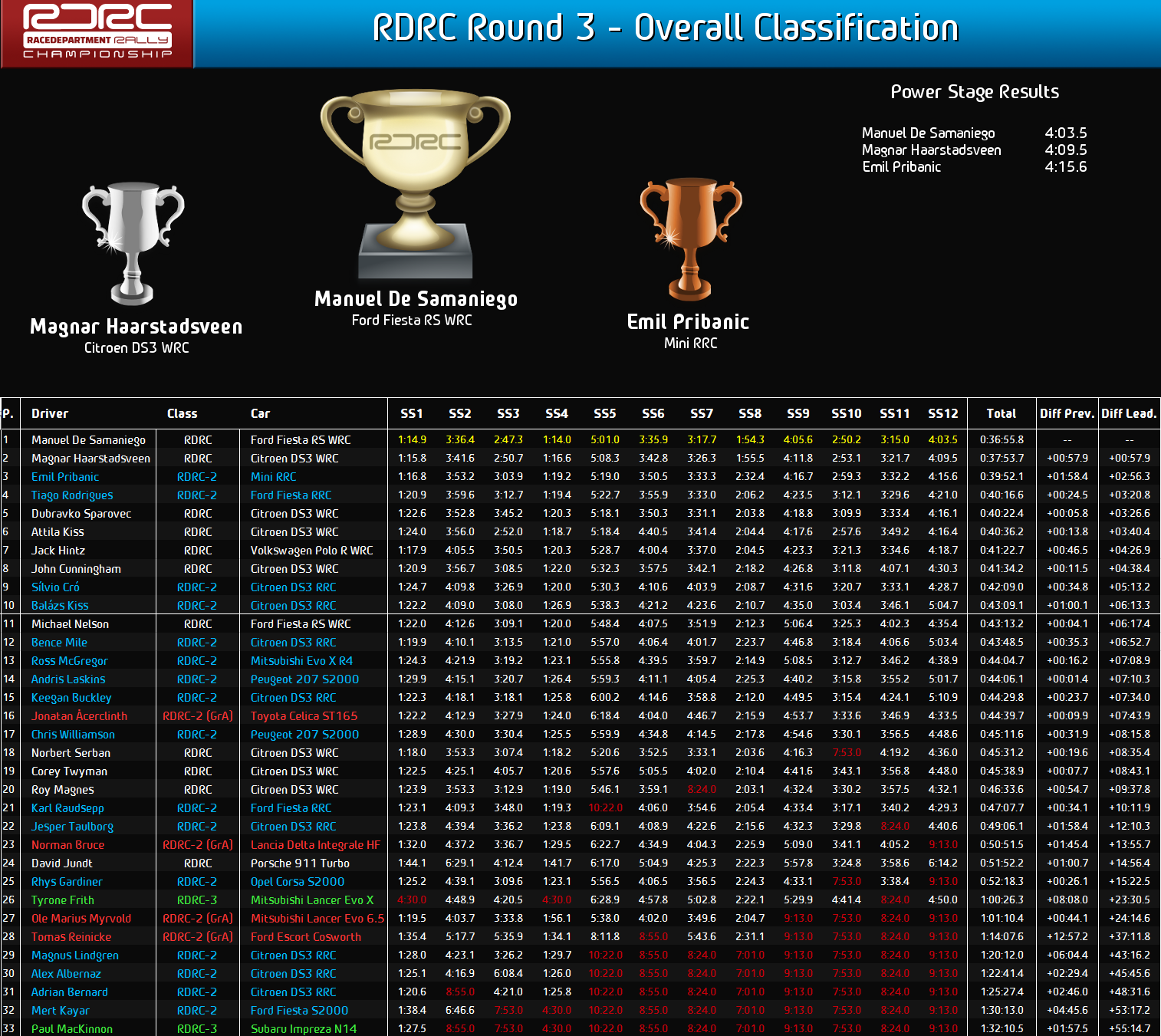 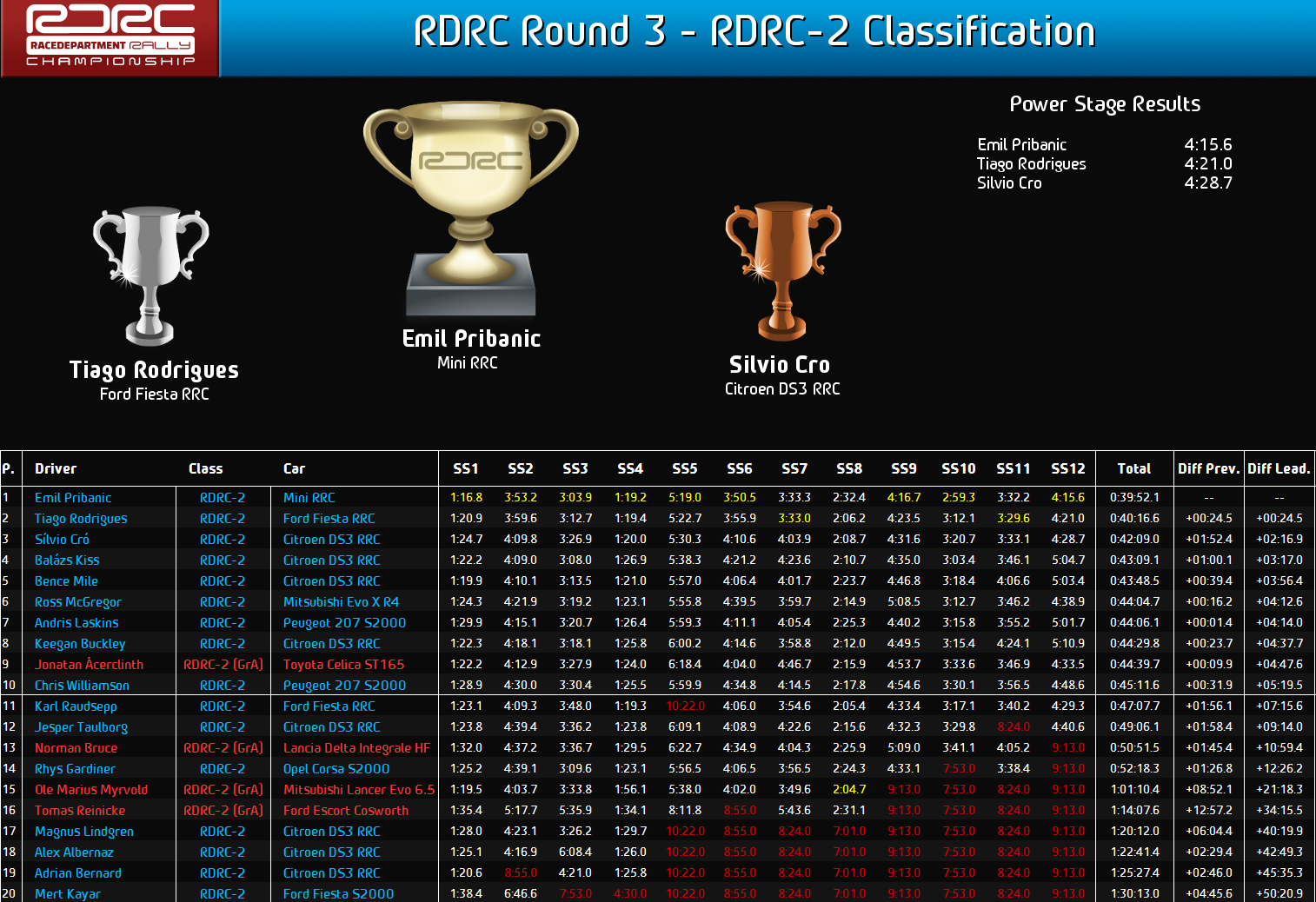 Awesome! can't wait to race in the snow again

This rally should be fun
Will get the Itinerary sorted tomorrow.

Itinerary is now up
Sorry for the delay guys, haven't been well and not been able to do much the past few days!

Hey, rally school is not possible on snow light cloud

Crisp clear for that one on both occations, then.
We'll have crisp clear on both runs on Greenhills asweel, as that is the only selectable weather that is when setting up sessions.

Finished. Had great race with Serban. Constant pressure on my neck till ss8 when stupid journalist decide to die and become flash news by running in front of my car. Great rally. Congrats Serban, i had great time. See you all.

Had a tough rally, everything was going well till ss10, where I hit a rock, and I was forced to retire...Congrats to Emil, great to see him with a RRC car to beat WRCs sometimes

So
- I like snow rallys I imagined I can practice a lot. ->
- I didn't have much time to check stages so sometimes I had a huge surprise
- I have a huge right shoulder pain so, yep, tough rally.
Congrats to everybody, especially to Emil

okay, Now this time I hate Hualapaiaiaiaiai Nation stage This stage screwed me up, and the other 4 stages.
My car is a madafaking Hulk so now I call him to Hulk. What it gets on this rally, It was lol.

Power stage: 2 Wheelie on the straight, and after the finish Hulk's transmission is given up. Until this I haven't got any engine, or other problem, only suspension.
On few stages Hulk was drunk so he went like this: \

i'm gonna miss this one unfortunately. I'm in Aberdeen and my computers in Prestwick

I was in Aberdeen on friday, could've delivered it!

Pre-Event I didn't do a lot of practice as I know the stages well enough to feel somewhat confident in my ability. Still did a bit of practice on the problematic ones where I know there is dangers to double check my notes for the stages, most of it worked, only one big misstake on my part when I was doing this

Had a calm and steady run through the stage.
No major misstakes, a resonable time with the Celica

Don't like this stage and the wheather didn't help either. No confidence, made an early misstake of taking a bit too much speed with me into one of the left-right combinations and the road dissapeared from us.
Got back going and took it easy for the rest of the stage, an allright time, not happy with the run but the time was allright.

Made a few misstakes here as well, very similar to the misstake at Hualapai and two major spins in the last few corners hitting the stones with the rear end....

Pushed a bit more this time 'round and went a second slower than the first run but I put that down to the lesser grip.

I like this stage but made an early misstake rolling the car. Pushed hard and gained some time back but 20 seconds lost in the first K was too much to gain back in the end....

A second run and after a few small fixes to the notes after the previous run to bring in a bit more confidence in my driving and the lack of grip suited me better, no misstakes, a bit more hard driving and a much better time

Don't like this stage at all and a lot of small misstakes combined with those suicide photographers in the last quick right hander saw me having to use a CFH without me wanting to.
A lot of anger but Johan managed to calm me down but a lot of time lost on this stage unfortuntately

Don't quite like this stage either. Never seem to nail the stage but this time I did actually, near enough, nail it. PB with the Celica and second ever best time on the stage for me so very happy with that run

Prospect Ridge, one of my personal favourites but the run went wrong everywhere and I cap-ed it off by misscalculating the speed through the - cambered right at the end of the stage and damaged the radiator hitting a tree almost head on......

Took it easy this time around and did my best to not loose time while taking it easy. No major misstakes, almost equalled Balasz' time on the stage so we were both happy with that one

Power stage and full attack was on the agenda.
Took no prisoners, had one incident after the bad road in the dipper early in the stage loosing us a couple of seconds or so but other than that, and a kangaroo-y rear end on the 6th gear run into the last set of turns of the stage, it was one hell of a quick run. PB with the Celica so happy with that one

Overall it could have gone better but considering the amount of stages in the rally which I don't like, I'm happy with the event

Hoping that I might get another podium in Retro country and maybe a top10 in RDRC-2 to get my championship going, finally


Good luck to those yet to run
A

Ross McGregor said:
I was in Aberdeen on friday, could've delivered it!
Click to expand...

Well thats depressing. Must plan ahead more, although i'm not sure how the Thistle Hotel's wi-fi would handle it.

As a side note, Aberdeen is the worst place in Scotland to drive, except Glasgow.