Chris Down said:
@Ricoow No rush, but just wanting to poke in advance about the practice server this time, since you said you're the person to bug
Click to expand...

Ah f*. I told myself I'd do it straight after the race. Got lost in a concert. I'll make sure it goes up tonight

rikirk said:
@sisco55 such a superb race of yours, looking at the stream the car was planted and didn't even look like the track was flooded compared to the black car behind trying to tame all that power oversteer.

After the race I didn't have the energy to get off the seat and I watched the whole thing which I found very entertaining.

Again great job to the whole team at RD and congrats to the Podium!
Click to expand...

hahahahaha, thank you. I had an error with the fuel and had to stop before finishing, but nothing happens, I had a great time. My team has good setups for Aston, it is a car that we use a lot to run resistance.

@Ernie @Chris Down Server is up chaps

Ricoow said:
Ah f*. I told myself I'd do it straight after the race. Got lost in a concert. I'll make sure it goes up tonight
Click to expand...

Thank you very much!

A question for this week, the original post says 2 pitstops, but it seems like SGP has only one configured:

Chris Down said:
A question for this week, the original post says 2 pitstops, but it seems like SGP has only one configured:

Sorry to bother again, but as someone with a stake in this I'd really like to double check whether the rules in the first post or on SGP are the correct ones ;-)

Chris Down said:
Sorry to bother again, but as someone with a stake in this I'd really like to double check whether the rules in the first post or on SGP are the correct ones ;-)

What difference is there?

Ricoow said:
What difference is there?
Click to expand... 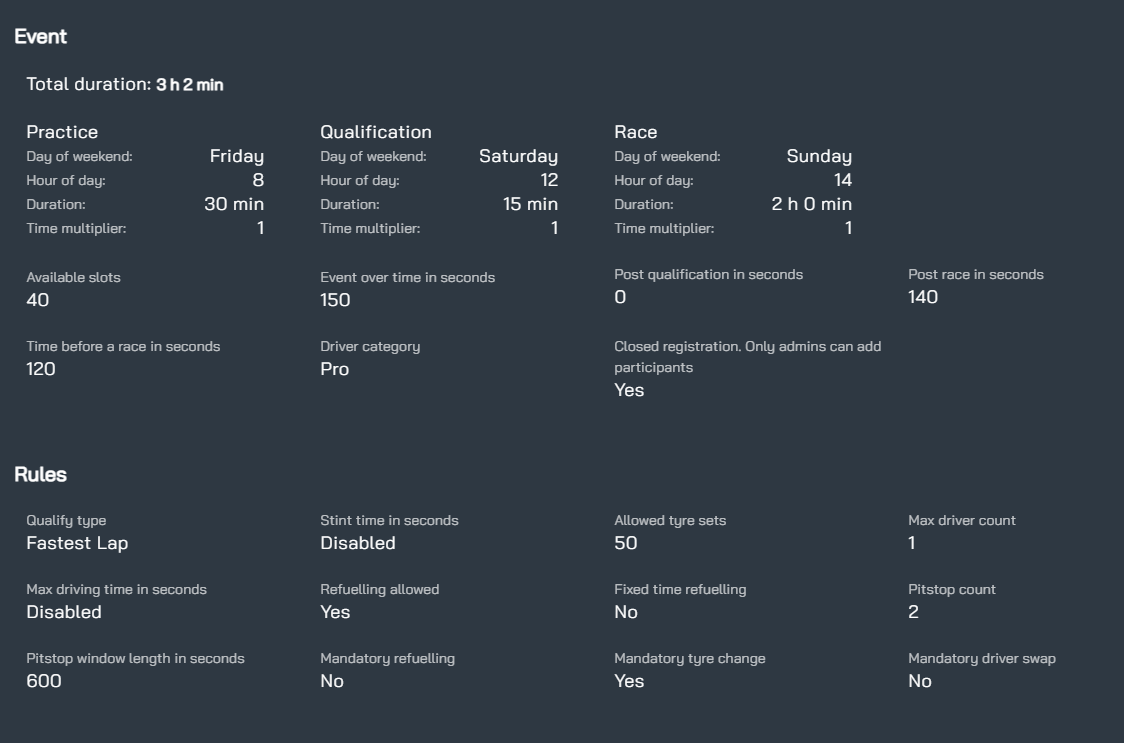 It is showing 2 for me. You sure you looking at the Spa event?
Click to expand...

Still got an old tab with Spa open showing 1, but refreshing indeed now shows 2. Thanks!

Just to check, with the 600 second pit window length, I assume that means that there are two mandatory pit windows between 35-45 minutes and 75-85 minutes, right? And both of them have mandatory tyre change, not just one of them?
Last edited: Mar 27, 2021

Chris Down said:
Still got an old tab with Spa open showing 1, but refreshing indeed now shows 2. Thanks!

Just to check, with the 600 second pit window length, I assume that means that there are two mandatory pit windows between 35-45 minutes and 75-85 minutes, right? And both of them have mandatory tyre change, not just one of them?
Click to expand...

Yeah I did correct it today, unfortunately sgp asks you to set the stops for the entire championship so I had to wait until after event 3 to edit the championship

Both are mandatory and the windows are correct.

Shouldn't the season finale stream be starting now? Got quite a few mates in this race and don't want to miss it.

Cheers and good luck to all the drivers

As some of you have unfortunately noticed by now we have made a "little" mistake in the config of the event with a BIG negative impact.

We orignally planned two mandatory pitstops for this two hour race at Spa and we assumed that two pitstops would be treated the same way as a one stop window in the game. Unfortunately we have found out the hard way that this is the case.

@Ricoow from race control has notified the drivers via chat in game but a lot of drivers missed out on the messages that you needed to pit twice in 10 minutes (which is of course too short).

We are unsure how this will affect the championship overall standings so will analyze the results tomorrow and make a decision how to respond to this misconfiguration.

That said, the drivers that failed to finish the race will of course still be eligible to win the prize of the driver that finished every race of the series. Nobody will be affected by this.

Sorry for this bad news, it leaves a bad taste in our mouths, just like it will do to you and we can only apologiize for it. Won't happen again as we will figure out what caused this and what the follow up will be.

@Bram Hengeveld @Ricoow It can happen sadly, either way massive thanks for the organization and @Paul Jeffrey and @Davy Vandevenne for the broadcast and cameras.
Whatever the conclusion will be for the results, people will be unhappy, so I ask everyone to just appreciate the effort that was put into the league.

Haha, I saw the time passing, 40 minutes had gone and I was questioning my ability with math I came in for the first pit stop and.. after that I figured out that something would happen at 1h race time. It's sad you couldn't alter the pit window during the race, it was really funny doing two other pit stops in those 10 mins. Anyways, 2-hour race done. In the wet. I'm happy I saw the chequered flag.

I don't envy the stewards... in any case thanks for organizing this series, it was my first time in an ACC league and it was fun.
Last edited: Mar 27, 2021

Has any decision been made yet?

Thank you for organizing this Championship. Thanks to all involved in this.

My race in the finale was quite disappoining, but overall it was fun to participate.

Jimlaad43 said:
Has any decision been made yet?
Click to expand...

Honestly, it looks rather straightforward to me. There were going to be two pit windows, one at 35-45 mins, the other one at 75-85 mins, so people prepared for that. I guess just a few people thought there was going to be one mandatory stop only and started the race with fuel for 1 hour. They were lucky. Most people pitted at 40 minutes.

When race direction announced we would have to make 2 stops during the 1h 10-minute pit window, well that was race direction issuing a command. Now, they could have repeated the instructions a few times, I read them only once in the chat. Nevertheless, that was mandatory. Some people did not see/understand it or decided to ignore it and do 1 stop only. All the same, you have that little number "2" on screen telling you you still have to make 2 stops, and also you have the "pit window open" message with the countdown very clear on top of the screen, so there is really no way of not seeing what is going on. I understand one could wonder whether there will be another pit window later, but in that case one asks.

So one can complain about the mishap, but race direction is race direction. All those who did the 2 mandatory stops during the pit window (and in many cases also the first one at 40 mins) did the correct thing. Those who decided they were in the right and just ignored the thing, or did not understand what was going on, gained an unfair advantage and need to be sanctioned.

Now, I think the sanction should be made by adding to their race finish time the time it takes to do the whole pit stop thing or 2 pit stops if they didn't do any during the pit window: is that what showed automatically at race end? Plus, a penalty (5-15 seconds?) for disregarding race direction commands. To me this is the only fair thing to do. Or otherwise just do another race and settle things on track.
Last edited: Mar 29, 2021
You must log in or register to reply here.