Ahead of this weekend's Long Beach ePrix, we take a look back at Formula E’s five previous destinations in its first ever season.

Formula E’s sixth race of its eleven-race season is happening in Long Beach on Saturday, the California street circuit for hosting both Formula One and nowadays Indycar, and is the first time the electrified series has crossed paths with more conventionally-powered categories. Regardless of its all-new status, to be an international championship and have this happen is quite remarkable. The strictly street-circuit ethos has meant a lot of new tracks in different locations, and these unknown quantities have been one of Formula E’s most fascinating aspects in its inaugural season. With street circuits come natural limits in terms of adventurous track design, but this has been more apparent in some of the five circuits more than others. Click on the links to watch onboard laps of each circuit.

Perhaps it’s for the best that Formula E got what was easily the worst of the circuits out of the way in its very first race. And the series was, in a way, lucky that Nick Heidfeld was sent airborne into the barriers by Nicolas Prost at the last corner, a high dramatic moment in an otherwise tame race. Beijing’s had street circuits before, A1GP’s being the most infamous example, but that notoriety was at least more interesting than Formula E’s one. Like F1’s Sochi circuit, it navigates through former Olympic facilities, but Sochi can claim to have a few decent corners. Beijing is essentially all 90-degree turns and enough chicanes to make it mostly single-file running and prevent any sort of momentum.

It’s mostly the generic layout which keeps this one further down, another right-angled affair which at least lacks Beijing’s chicanes and shares portions of the former Museum Park circuit from the 1980s-90s. It definitely produced an exciting race, especially in watching the drivers having to deal with the combination of bumpy braking zones and a tight final section circling the AmericanAirlines Arena. But was it a bit too tight? The fact that race control declared the pit exit area a permanent yellow flag zone was almost a tacit admission of this.

No, Putrajaya’s race wasn’t Formula E’s best, but the Malaysian circuit is more unique than Beijing or Miami. The straight leading into the first chicane and then the run through turns 3 and 4 are the prime overtaking spots, but most appealing is the relatively fast section followed by an extreme hairpin on the Seri Wasawan bridge; Karun Chandhok called it “probably the tightest hairpin I’ve ever driven in my life”, with drivers forced to turn the steering wheel one-handed just to make it round. The race avoided any roadblocks at this section, but a hobbled Bruno Senna was caught out in spectacular fashion by turn 9 at the end, proving Putrajaya’s challenge.

The Uruguayan seaside track is the only circuit Formula E’s visited so far that isn’t new: Punta del Este has been raced on before by TC2000 touring cars, but I wasn’t expecting much from a layout which has many chicanes like Beijing. But instead we have a circuit which the drivers can attack like nowhere else on the calendar, the whole back stretch from turns 10-16 the big highlight. It also hosted the best race so far with sustained battles for the lead between Sebastien Buemi, Nelson Piquet Jr and Jean-Eric Vergne.

Commentators Jack Hawkins and Dario Franchitti knew it as soon as they saw it; in the fast and narrow left-right-left of turns 10-12, Formula E may have its first classic corners. If you need more proof, follow the YouTube link and watch how committed Daniel Abt has to be through that section, how close he gets to the inside wall. But while no-one crashed at this point, Buenos Aires’ ePrix had drama at every other point on track. Turn 1’s hairpin saw a small road dip on exit for those who ran wide, the fast sweeping turn 3, the key overtaking points of turns 5 and 7, plus the tight concrete-surfaced chicane responsible for several big retirements during the race. It was more chaotic than Punta del Este’s ePrix, but in its flow of very challenging fast and slow corners Puerto Madero has my vote as the best track Formula E’s visited yet.

The future?
After Long Beach, Formula E will go to even greater prestige by visiting a shortened version of the Monaco street circuit in May. After that it’s a run on retired airport tarmac in Berlin, the very late-announced Moscow race next to the Kremlin and the double-header season finale round Battersea Park in London at the end of June. Early thoughts? London looks most promising even after the changes to the proposed layout, but it’s a shame the Formula E cars won’t tackle the original clockwise, mostly chicane-free version which Lucas di Grassi dubbed a “mini-Macau” and would have been an incredible way to end a so-far exciting Formula E season, sure to have a few more big twists before it’s done.

What have you made of the circuits Formula E’s visited so far? Got a favourite? Looking forward to any of the remaining tracks in particular? Comment below, and vote in our poll!
Last edited: Mar 31, 2015
Reactions: Howard, airutonpurosuto8912, Philip Heck and 3 others

Couldn't agree with you more there. 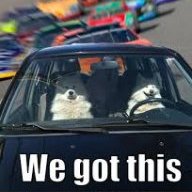 Here's a serious question guys, is Formula E all it's cracked up to be? I only watched the first race last last season and it was very sub standard. Tracks look like something from Project Gotham Racing. Fan boost sounds a bit gimmicky and pits stops to change cars do they still do this. It's obviously taking off it's getting more coverage than MotoGP on Racedertment @Bram
Do we not have a MotoGP columnist?

@Gavin Hendley FanBoost is definitely the biggest drawback, and it's a shame that the technological limits mean they need to change cars - the long pitstops can really upset the order. Still, have a look at some of the highlights of the races after Beijing - as I said in the article, they got the worst one out of the way first; all the circuits since then have been more exciting and provided better racing. The low downforce, no turbulent air and narrow grooved tyres make it easy for the cars to run close together; if you can get past the issues, it's been mostly very entertaining.

Gavin Hendley said:
Here's a serious question guys, is Formula E all it's cracked up to be? I only watched the first race last last season and it was very sub standard. Tracks look like something from Project Gotham Racing. Fan boost sounds a bit gimmicky and pits stops to change cars do they still do this. It's obviously taking off it's getting more coverage than MotoGP on Racedertment @Bram
Do we not have a MotoGP columnist?
Click to expand...