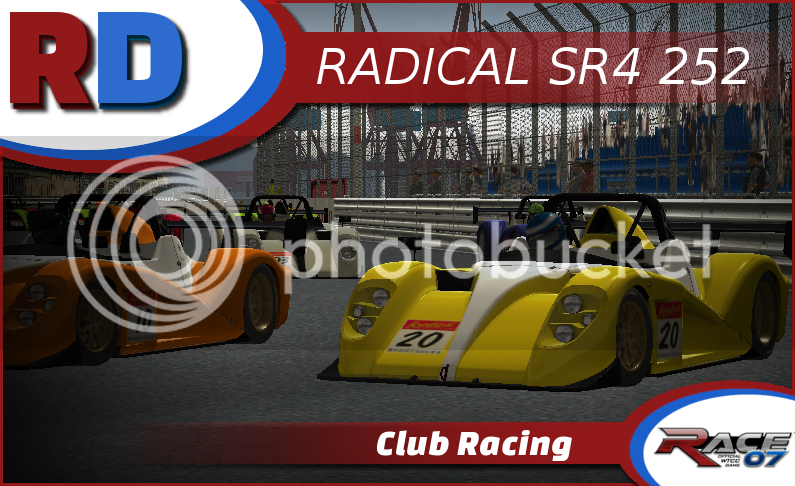 Ready for a high speed trick, and technical... O sure!
sign me up!

Going crazy trying to set up a car for this event? Look here for a couple of quick ones.

Unfortunately, I'm not sure whether I'll be back in time - have to 'maybe' for this one


If you want to see how other RD members have designed their cars, feel free to download & install the RaceDepartment Race07 skinpack:​

​
For more information on the pack and how to get your car added, see this topic.​

Sing me up please !

haven't raced for a while, very rusty - but count me in please

How does Time Attack qualifying work?

@Dennis Phelan we voted it through to p1, want to rejoin?

Dohhh.... made some mistakes and damaged my car,so it was impossible to drive ,must pull out ,sorry Nelson for crash I didn't see You when returned to the track

Gundars Brigis said:
Dohhh.... made some mistakes and damaged my car,so it was impossible to drive ,must pull out ,sorry Nelson for crash I didn't see You when returned to the track
Click to expand...

It is all okay Gundars, it was not like I was in contention to win or anything

There was a good car in the garage, I tried to put it to good use. The only problem were those drivers from the Dillon family, just a bit quicker than me! In Quali I tried hard to the point where I hit a railing but was planning on coming home with a slow time at the end, I did that.

During the Warmup my backup battery for the internet modem decided to go out buzzing away as I tried to and eventually did reset it. I was very relieved to see that everyone had waited for me. Rats! Now for their effort I was forced to drive fast and fight hard to be worthy of their wait and reshuffling of the grid, just so I could race.

A good start and we're off but some thought the race was the 4 laps presented in the forum flyer and some thought it was a 30 minute race because I has screwed up and not set the server for 4 laps. This meant it would be a 5 lap race . Fuel was discussed at the start and there was a 15-20 liter variation in what was being carried.

On we go, Paul is off and back on in front of me and I'm off waiting for a car or two to go by. Making up time like a madman, after all everyone had waited for me, I pressed and closed pulling back a place. At 10 minutes to go Nelson and I are TS chatting about whether the Dillon's have enough fuel, are planning on stopping or if the race should be called at 4 laps.

We waited until 1st and 2nd [the Dillon's] had pulled off after 4 laps before I left the course, followed soon by Nelson. After the race it was apparent that Michel had won as he was on top of the leaderboard. Nelson had won because he had seen himself on the Results Monitor as leader and April had won because she finished four laps about 50 seconds ahead of Paul.

Clearly someone deserved the win. I did not as all I can do is create one mistake after another. April had the grip and speed on the course so sorry Nelson, you're going to have to hold off on adding another victory to your tag line. Michel, you're a good sport and I have to ask, why did you wait where I was at the side of the track, you were not involved.

Finishers or not, thanks for your participation in today's event everyone!

forgot to fuel the car. had only for 4 laps fuel

This was fun! It's been too long since I last raced the Radical. And despite the confusion about 4 vs 5 laps, this was a fantastic evening.

I just need to get my wheel fixed. I spent tonight doing gear changes on buttons instead of paddles, so my thumbs are kinda sore. Though this comes weirdly more naturally than you'd think, it works quite well.

Thanks again to all for moving forward to P1 again after I dropped out. You must all know that it's not what I would do and you had no idea that I would even try to get back. I guess it was just Nord's calling for more laps

Dennis Phelan said:
Thanks again to all for moving forward to P1 again after I dropped out. You must all know that it's not what I would do and you had no idea that I would even try to get back. I guess it was just Nord's calling for more laps

It was my suggestion because I had noticed you dropped out of the race and TS at the same time, so I was guessing it was your internet. David Kingshott had done a similar thing for me at Sturup last week, so it was easy for me to put myself in your perspective.

Yes, Dennis i'm a gentleman!
I agree to disclame April winner of the Race,cause she was (and she is) the quicker for the track! 6,50 is not so bad for me, but 6,20 I can't go!
For the waiting, i don't know if u saw the replay, cause i push u in the down causing a 360, and i would have a nice versus, as i can't go searchin' the firsts!
I has calculated 55l for tha race, but is it enought, not sure!?
Sorry for that, i would say that the head should go in pit to refreash their fueltank, but....!
Thanks to everyone , and next!

April and I were both thought it was a 4 lap race and were running 45 litres, which would never have got us 5 laps. What I don't understand is how she managed to be 5 seconds a lap quicker in the race than she was in qualifying .. I tried to exert some paternal authority but to no avail - she has no explanation.
You must log in or register to reply here.