Hi
I am thinking of purchasing the next level seat mover in the next few months.
I am also in need of a new sim rig since I have a playseat foldable option at the moment.
I would like to stay under 4-500 dollars for the seat including the seat.
Also I am not interested in complicated assembly. I dont enjoy it and have little time.
Somebody suggested this 8020 option: https://rigmetal.com/products/racing-rig
that seems really nice and inexpensive but instructions are not included so I will pass.
At the moment, I was looking at the following:

The ART racing simulator cockpit is one of the most adjustable cockpits on the market. Fully compatible with Logitech, Thrustmaster and Fanatec Equipment.

any other suggestions are welcome.
Last edited: Aug 15, 2021
Sort by date Sort by votes

Don't be worried about building an 8020 rig, they look complex but they're incredibly easy to put together once you know the basics of how the t slots work. And it gives a huge amount of flexibility for future upgrades and switching things around.
Upvote 1 Downvote
L

I went 8020 as well. It's really a great way of future proofing as u can attach stuff where ever You want and move the frame bits around to make it fit your size etc.

Tricky bit is getting the right size seat. I ordered this but the bolsters where to tight on my legs so ordered a cushion to lift me up so my legs aren't pressing on the seat 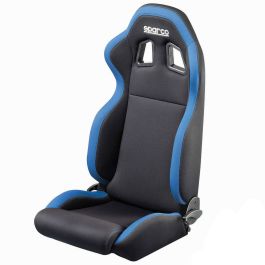 The Sparco R100 sport seat is lightweight, compact and is suitable for most cars. It has been built for comfort and support but it's lower side bolsters and slightly narrower steel frame allow it to fit into vehicles where fitting seats with larger side bolsters may be difficult.The seat...

Take this opinion for what it's worth, but a solid profile foundation is something that everything builds on.

From a priority standpoint I would get a solid chassis first and a very comfortable seat that can handle 5 or 6 point seat belts. Make sure you have a good wheelbase, solid load cell pedals and if you have those boxes checked than get a G-Belt.

I have an NLRv3 in my SimLab P1 chassis and I got both together, but after getting a G-Belt recently, my NLRv3 fades into the background quite a bit. Tactile makes a difference next then motion. ( That assumes a good wheelbase and pedals as part of the foundation )

That is unless you want motion for flying or expect to spend a lot of time in rally going airborne. If you are mostly on a track motion should probably be the last thing on your list.
Last edited: Aug 16, 2021
Upvote 0 Downvote

Agree with the sentiment here and I could slightly arrogantly also point out that I was probably the first person to actively move AWAY from motion after first owning the V3 and then building my own SFX-100 system. I much prefer the static nature of the chassis now, echoing the thoughts of RCHeliguy that there is a pecking order you should be attempting to flesh out first and foremost. I absolutely agree that if you're even the slightest bit interested in sim racing hardware (and you seem to be eying the V3 so I'd suggest you are) that the 8020 chassis is the absolute first thing you'll need to acquire that isn't a wheel and pedals. From here, you basically have a cockpit for life and the resale value always remains high as there's basically no wear and tear on these things. People have different priorities and mine would first and foremost be tactile when considering the add-ons to the chassis. I consider add-ons to be things like motion, tactile, harness tensioner, wind sim modules, etc. things you can drive without but after owning them you probably wouldn't want to.

For a matter of interest, and maybe everyone else could put their own list together, out of the systems I've owned/used, my order is:

The tactile and tensioner are very close together in that I'd want them both together, and the motion is a much distant third to each of them. The great thing is, for the price of the V3 seat mover, you're going to be able to invest in both a G-Belt from SimXperience (if you lack the knowledge or the will to do a DIY system) AND a very adequate tactile build for around the same money ($3K AUD from my calculations, cheaper than the V3 seat mover which comes in at $4K).

I really, really liked the V3 when I had it. It was a very clean and compact piece of kit, a great solution to adding motion to your rig. I actually ran both it and the SFX-100 at the same time, but decided it was no longer necessary to include a seat mover when the 4 actuator 3DOF system was a step above in terms of capability. In the end, I probably regret even building the SFX-100 because it meant that I moved my V3 on, when otherwise I'd probably still have it to this day, along with the other items I've talked about.

I'm happy with my decision to return to static racing, however. It's better for lap times, no matter what anyone says to me there is no way you can drive faster in a competitive environment with the chassis or seat moving. Whether it's unrealistic or whatever, others more than likely are not dealing with the same movement and therefore you're at a disadvantage every time you get in the seat.
Upvote 0 Downvote
You must log in or register to reply here.

Will this work for adding a transducer to my system?