Somebody answer this question and just tell me how to solve it.
In a race on any difficulty using no mods in the game at all, why does the race leader race off into the distance after first few laps as if hes got nos power and leaves everyone else behind?
Hope they have sacked the dude who programed the AI for this game and employed someone who knows about F1 to program the AI for the next game. 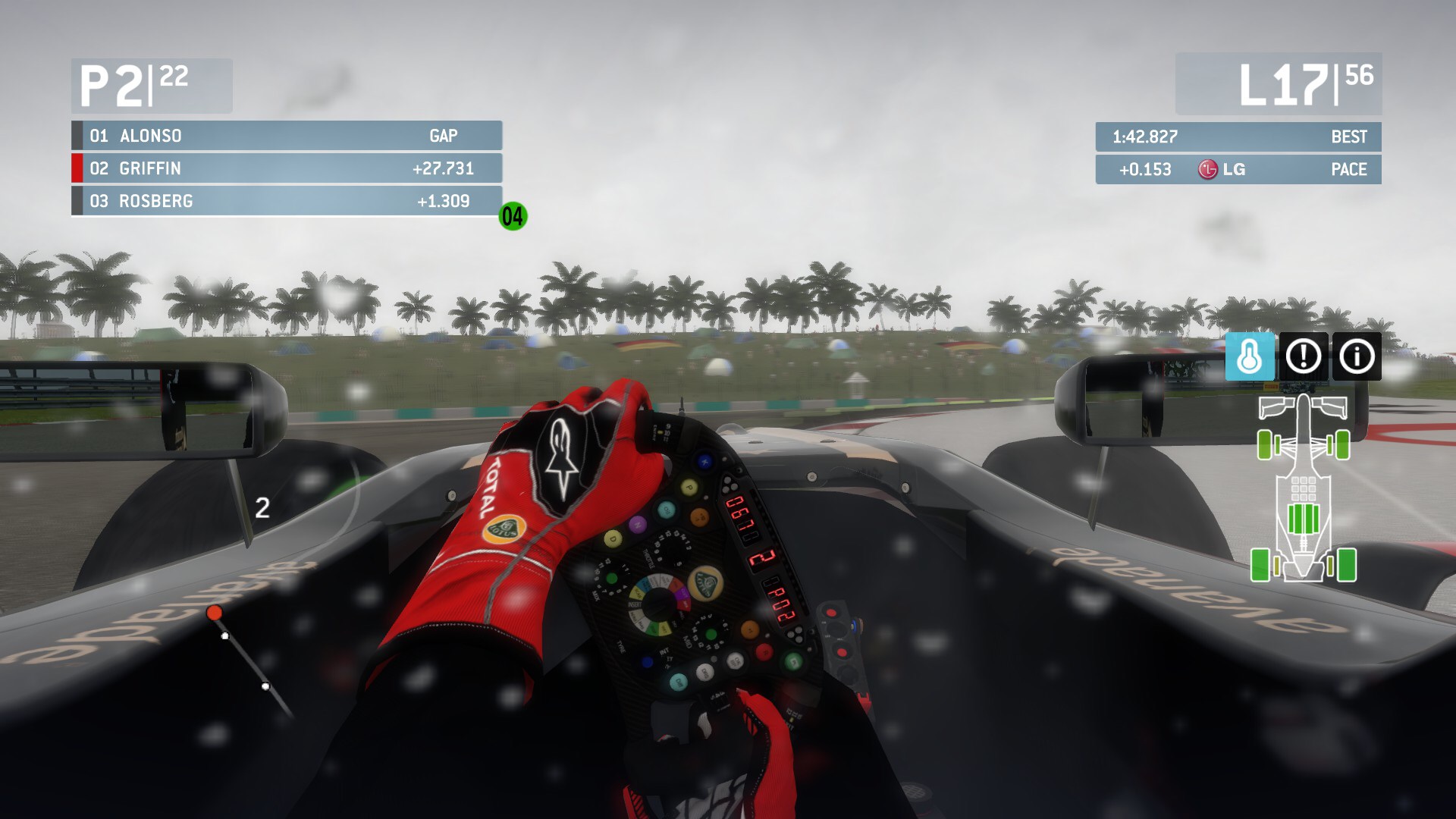 Just isn't right is it

you are holding the guy up behind u.. alonso is faster, u too slow. Deal with it

"Deal with it" was just some tough love, mate, keep racing, and you'll get better. Peace out brother.
Last edited: Sep 9, 2014

Could have done with the slightly less aggressively sounding 'deal with it', but Jacob is right.

So many drivers run at an AI level higher than they should. I know the AI isn't perfect by any means, but I tended to feel the same way you do. In my head I am a better driver than I really am.

If you look at your races, I found that often I had a 'Trulli Train' behind me, I am not fast enough, and the rest of the field are trailing just behind me. It's because the AI don't take enough risks when it comes to overtaking. If you stick to the racing line, without making mistakes, the AI will not get past you.

Of course if it happens to you at lower levels, then there is the option of installing an AI mod that might balance the field out a bit, to suit the level you are really at.

Personally I do think that the AI have too much grip coming out of slow corners, they can always apply power before I can, and handle that power better. This puts you at a disadvantage for the next corner, because you are not close enough to attack in the braking zone. It's the braking zone where the AI is at their weakest.

I am normally at the same level as the other drivers but it is just the leader of the race that seems like hes got nos or infanite kers or something.
Alonso finished 1min 20 secs infront of the guy in 2nd place in that race.
I play at expert difficulty becase thats the best level when using all assissts.

I wasn't being aggressive, sorry. It was with all due respect Didn't mean any by it.
@john griffin
@Graham Laing

Even though Im a noob( I started sim racing like a week ago), I can tell you, F1 2013 difficulty is not that hard at all.Apart from playing with the formula cars in Gran Turismo 3, I had no experience with racing formula cars at all and even though Im still getting used to driving with a wheel and pedals, I 've had no problem getting better and better each race.Mind you I like a challenge, so from the start I went straight to Legend AI and no assists and racing only the circuits I know best.

Before each race I do a free practice of at least 5 laps, then before each GP (25% of the race for now) I do the full qualifying, which adds a lot to the immersion by the way and gets you pumped up and ready to race.If you do good on the qualifying and are starting at least 6th on the grid, if you are aggressive enough you can overtake 2 or 3 cars on the first corner, maybe more, add KERS and Rich mixture for the opening laps and you can snatch the lead and try to keep it from there.

The first races I started I did poor on qualifying, starting 15th+ on the grid and because I was still getting used to the game/wheel setup, I usually ended up losing quite a few positions in the first corners(AI doesnt help with the stupid rear ending) but still I tried to do my best to finish the race even if it was at last place.With more practice I make less errors and stay competitive for the majority of the race and have been finishing closer and closer to that podium, yesterday was my best, at SPA , I did lead the race until pit stops but , becauase of the stops I ended up 5th on the next lap, but I snatched the 4th place by the final lap, which felt great.

Conclusion: if you practice enough you'll find that gap getting shorter and shorter and if you get within that 1 second gap, DRS will do the rest to get you ahead.
H

If it was only Vettel all the time, I'd say it's realistic. But I see it's Alonso. LOL

Certainly seems that you're just holding up the second guy. Maybe you have 3rd party AI mods installed as well, which could be causing this.

"Alonso is faster than you"
You must log in or register to reply here.

Leader car AI is a cheater!

Looking for a game to simulate a season with AI only