Aidan Keranen said:
(can I request that my three starts be translated to a start/pit/finish please RDFIA xD)
Click to expand...

I mean it’s not as if you’ll gain any more points by doing it. And as it’s the last race of the season I’ll allow it.

Premium
brilliant, unlike the amount of times i did this race, i can't begin to express my gratitude

Aidan Keranen said:
brilliant, unlike the amount of times i did this race, i can't begin to express my gratitude
Click to expand...

Feels like your motivation is off the charts here 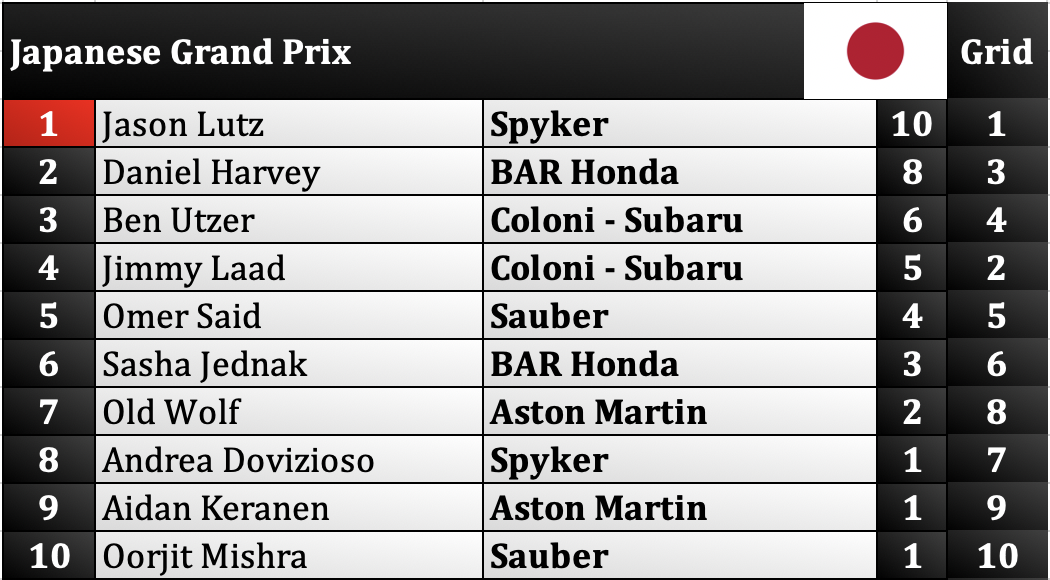 It was Jason Lutz who finished off the season in the best way possible. The American, seemingly not put off by losing the championship, had the perfect weekend starting from pole and leading the field all day to his fourth win of the season. Champ Utzer also finished on the podium in his ever so consistent season. They got split by Harvey who also finishes off his season on a high. Meanwhile, Said beat his teammate as Mishra seemed to struggle today, nevertheless still ending up 3rd in the overall championship. Jednak finished a solid 6th with Wolf closely behind. The Greek really had an up-and-down season finishing on the podium twice and also picking up the top step at the A1-Ring, however besides that he really didn't have anything to celebrate. Dovizioso too had a lackluster race. The spotlights today however were set on the Aussie, Keranen, who seemingly had to perform three starts today as he trumbled over the line in his Aston Martin making quite the spectacle for the fans.

And with that Season 34 of the illustrious Forum Racing Championship is over. Congratulations to Ben Utzer and the Coloni - Subaru team for winning the season and thanks to everyone for participating in yet an enthralling season of close racing. I hope you all enjoyed it. Please stay tuned as I'll be posting some in-depth statistics tomorrow! ​

Firstly let’s start off with the teammate comparisons: 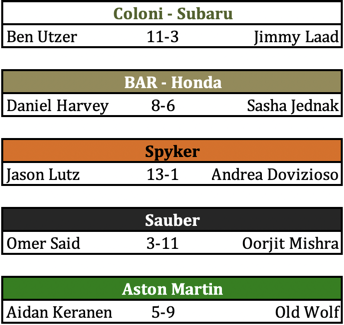 Even though Lutz outperformed his teammate the most, the driver who got the most amount of points for his team was Oorjit Mishra who scored almost 71% of the total points for Sauber. Next is Lutz with 64% for Spyker and third is Utzer with 61% of the points for Coloni - Subaru.

Next, let’s provide you with a couple of regular statistics like wins, poles and podiums: 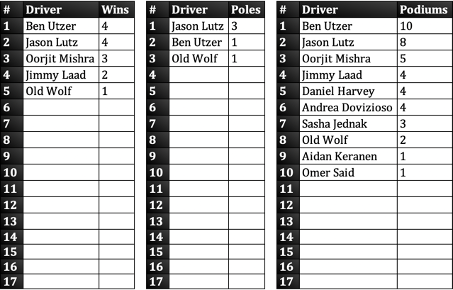 There’s not really much to analyse about this. One thing that does stand out is the amount of poles Lutz managed to get. Will this make him the best qualifier on the grid? Scroll down to find out!

Like we’ve seen in the second graph of this post, Lutz performed better during the races where qualifying was a part of the race weekend making him top this section. The table above also shows that Harvey wasn’t far off from the championship contenders during the feature races as he collected 75% of his podiums during those races. Also Wolf moves up a couple of places in the standings because of his dominant display in Austria. The Greek collected 35,3% of his total points tally during that race weekend. He also collected nearly 60%! of his total points tally during two races (Austrian- and Greek GP).

Let’s go back to the aforementioned qualifying stats. Lutz managed to perform the best of the bunch during the feature races but was he really the best qualifier? The table down below will tell: 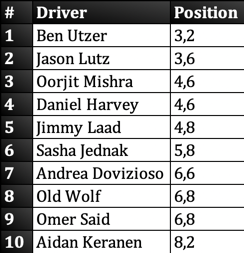 You can see that very little seperates the two championship contenders with Utzer again just about outperforming his American rival. Apart from that not much really stands out.

Okay, what about positions gained/lost during the feature races. That is shown in the table down below: 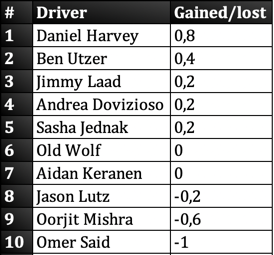 You can see that Harvey is the best improver of the grid making up an average amount of 0,8 spots during the 5 feature races he was involved in. Lutz will regret his -0,2 average which he suffered during the British Grand Prix where he wasn’t able to convert his pole into a win. Said rounds out the table with a -1 average which he mostly conceded during the first two feature races where he lost a total of 6 places from his qualifying spot.

Right, now let’s distinguish the races into a European- and a non-European part:
European races

You can see that the European part really hurt Lutz in terms of his position in the final standings, even finishing below Mishra who seemed to flourish the further he was away from home. Did Lutz crack under the pressure from the European fans, did he suffer from the jetlag or was it all just a big coincidence? On the contrary, he really seemed in the groove away from Europe where in the end he easily led the champ Utzer by 11 points.

Everything concluded we can say that Lutz began and finished the season the strongest, but Utzer managed to be the most consistent during the middle part of the season.

And that concludes the stats of the 34th season of Forum Racing. I hope you enjoyed it as much as I did hosting it and I hope to see you again next season!

Is someone willing to take over for next season? I’m really looking forward to be driving again next season.
Last edited: Oct 30, 2020

Loved the stats
Thanks @Tim.E , great moderating and stat collection

Premium
Great work @Tim.E and nice stats. Thanks for running this season.

Tim.E said:
Is someone willing to take over for next season? I’m really looking forward to be driving again next season.
Click to expand...

I could do it if nobody else wants to..

Premium
Huge thanks for that detailed stats review and perfect moderation @Tim.E

Milos said:
I could do it if nobody else wants to..

Need to see if i still have my app for posting night races
Click to expand...

Which means i can open a thread?

Welcome to the 35th season of Race Department Forum Racing! Joining Joining is quick and simple. Just make a post stating your interest to join. The Races The most important part of the game. A race consists of the moderator making a post containing the words GOGOGO. After this, you must make...

www.racedepartment.com
You must log in or register to reply here.