David Wright said:
This is like the tail wagging the dog.

First, AMS2 is not on console. Most Project Cars sales are on console. The existence of AMS2 should not influence the direction of PC3.

Second, even on PC, AMS2 was always going to be a niche product. There were 10 people playing PC2 for every person playing AMS1 on steam. Even if Reiza doubled or trebled their market share (and it hasn't) they were not going to be a "thrreat" to PC3. Indeed PC2 has always sold better on the steam sales charts than AMS2, even though its 3 years old and still full price.

Third, SMS do not own Reiza. They will get a small % of the sales revenue of AMS2. SMS would not destroy their prime IP to help out Reiza. ISI did not stop making sims just because they licensed out their game engine.

Fourth, Paul Rustchynsky who was game director on PC3, joined SMS in August 2018 which was before Reiza had even asked to try the Madness Engine. I'm pretty sure SMS had decided to go for the Shift type game before AMS2 was even a factor. Paul Rustchynsky worked on Drive Club and Onrush prior to joining SMS. He is not the guy you hire for a hardcore sim.
Click to expand...

Thanks for the info, I'm even more baffled by the decision to go sim lite then!

Damage Inc said:
Thanks for the info, I'm even more baffled by the decision to go sim lite then!
Click to expand...

To be fair I'm just as puzzled and confused.

My only suggestion is Ian had a desire to revisit his NFS Shift days and make a new Shift exactly as he wanted without any EA influence. NFS Shift did sell very well - 5 million copies. It had EA marketing behind it and the NFS brand, but Ian seems have unlimited confidence in his own ability to succeed, and presumably he felt he could duplicate the original Shift's commercial success.

Often he is right - he took a mod team called Simbin to be the most successful racing sim developer of its time. He took a crowd-funded racing sim to being the fastest selling racing sim of its time and very profitable. But equally he sometimes gets it wrong as evidenced by the disaster of Fast & Furious Crossroads and now Project Cars 3.

ACC is an absolute junk vs Pcars 3 on consoles .
-The consistency between gamepad/wheel
-Framerate & the consistency of the frametime
-car & track variety
-Difference in input lag

Any normal human being not having spending thousands on DD wheel & a gaming computer must roll their eye watching all the narcissist panicking.

Obviously if it run at 60fps on console, the PC spec requirement I suppose is lower.

I'm a bit biased, cause I learned to bomb dive with the brake in AC to produce pro laptime. 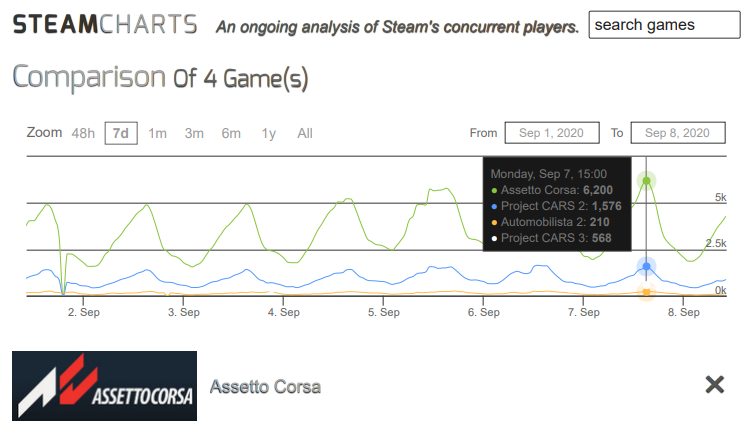 Doing so well, Ian must be so happy. Well there is always the consoles as a consolation.
You must log in or register to reply here.