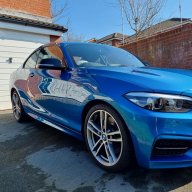 I am after some help setting up my triples for Project Cars 2. I have no issues setting up the correct FOV in any other sim but I've got so stressed trying to get it right in PCARS2 that I have uninstalled it..... twice! Previously used VR and again no issues (I have replaced the headset with triples now).

I have Nvidia Surround enabled and bezel corrected using a resolution of 7800 x 1440 which works flawlessly in every other sim.

Using the triple screen set up in game if I enter all the correct monitor values (height, width, bezel and angles) then the image looks awful. This is with the FOV amended in game to 106 degrees. When you load into the cockpit it's like your sat in the back seat with tunnel vision, worse still the side monitors bend the image outwards if that makes sense (I'm in work at the moment so can't get a picture). I've tried adjusting the angle on the setup screen to make it look right - I settled on 10 degrees but the FOV is still miles out.

Using the A and D keys (slowly as you have to press every time) I moved the seat position forward to where the FOV would place me in other sims - i.e. so I can just see the top of the dashboard at the bottom of the centre monitor.

This does not work! The images on the side monitors are way out - overtaking cars are like deformed stretched versions of themselves until they reach the main monitor. It's un-driveable as it completely ruins any immersion and removes your ability to gauge speed / distance as it's almost as if your side monitors are moving at a different pace to the centre.

Can anyone out there point me in the direction of what I am doing wrong or share their own settings? I enjoyed what I played of the game via VR and wish I could get it to work across the triples. No other game has any issues at all.

Thanks in advance to anyone that can help.

I may have figured this out after far too many hours of trawling through online search results... Looks like their FOV should be worked out on the middle monitor ONLY even when using triples so rather than 106 degrees then I should try 35.3 degrees Can anyone confirm the FOV you are using in game?

I have figured it out and it's as above. When setting up the triples you must set the FOV of the centre monitor only and the game workers out the rest. Also needed to add bezel size even with Nvidia surround bezel adjusted resplolution. Hopefully someone finds this useful in the future.
Reactions: Majuh
You must log in or register to reply here.
Share:
Facebook Twitter Reddit Pinterest Tumblr WhatsApp telegram Email Link
1 comments
IndyCar Releases Updated 2020 Schedule
5 comments
DiRT Rally 2.0 encourages UK gamers to STAY HOME SAVE LIVES
24 comments
iRacing Update Released
107 comments
AMS 2 | Hotfix 0.8.0.1 Now Available
204 comments
Isolation! What Have You Been Playing?
Top Bottom