I almost pulled the trigger yesterday.

My only real complaint with the Fanatec CS 1.5 shifter is that I can't tighten the self center spring. I get over exuberant and go from 2nd to 5th sometimes.

However I understand the Pro-sim feels a lot better in most ways in addition to having fully adjustable center spring tension and engagement tension.

Does anyone have first hand experience comparing them?

I've seen Barry's review in Sim Racing Garage on YouTube. He seems pretty enthusiastic about it.
Sort by date Sort by votes

I agree it's a steep price, but the quality looks amazing!

I think I have a stop gap that will reduce my itch level a bit. Moving the shifter may have taken care of my key complaint. With the whole shift moved right by a 40x40 piece and canted clockwise a bit past that I think 3rd gear falls to hand much more naturally which I think was my problem.

I still want the Pro-sim shifter, but I don't feel as compelled to buy it right now. I'm trying to be "good", but I know one day I may be weak...

I added a piece of 40x40 cut to size and using the slotted corner pieces I canted it out just a bit over 2.0" at the top. 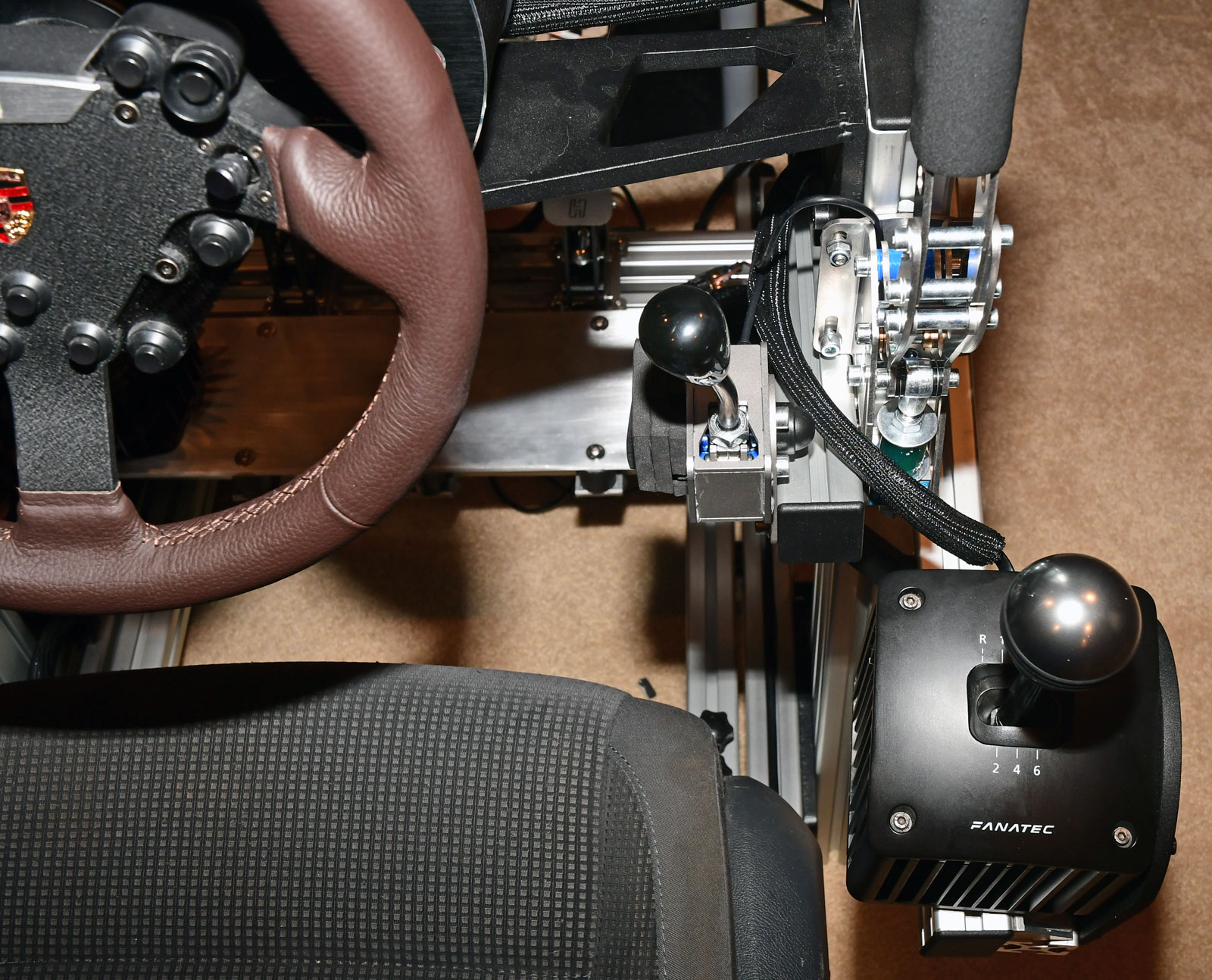 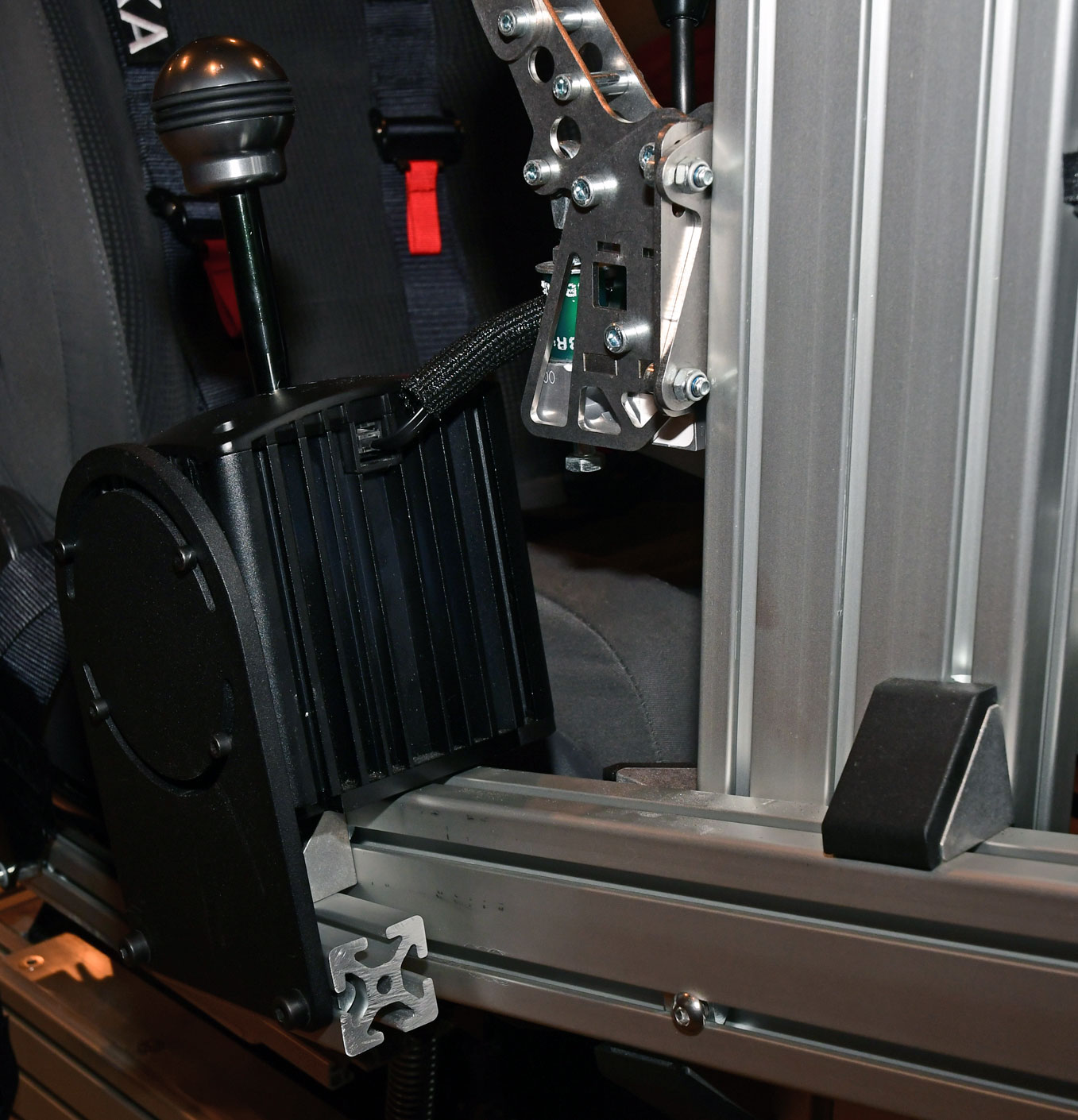 Would a direct drive wheel not be a better upgrade?
Upvote 0 Downvote

I'm actually pretty happy with my CSW 2.5 right now and I don't think this is the right time to buy a DD wheel. Maybe in 6 months after the dust has settled I'll reconsider it, but only maybe.

For now I have my H pattern shifter repositioned better and I 'm almost happy with it. That will be good enough for now.
Upvote 0 Downvote
A

I upgraded from the Fanatec shifter to the Pro-Sim about a week ago. They had it in stock, and it shipped from the UK to US in only two days, amazingly fast.

I would have kept my Fanatec - I thought it felt great, and liked having the sequential mode (I don't have a dedicated sequential yet). However, I had recurring issues with the sensors going out of alignment, with no apparent cause, causing mis-shifts for a couple weeks at a time until it decided to fix itself (and then work fine for a couple months). It wasn't fixable through re-calibration, I wasn't able to find any problems when disassembling it, and grounding it to prevent EMI didn't seem to help.

The Pro-Sim feels pretty wonderful, and more pleasingly mechanical. That said, the Fanatec certainly didn't feel bad by any stretch, and is clearly a much better return in terms of money spent.

Setup and mounting were trivial. It detects as a standard USB joystick. Tuning the left/right and front/back tension was very easy, and was necessary because left/right was very stiff out of the box.

I haven't tried adjusting the throw length or shaft length yet - I've been happy enough enjoying it as is. They do include a shaft extender. There's a couple YouTube videos from Pro-Sim which walk you through how to do all this. The only tool I didn't have on hand already was something to remove the ring locks, which is only needed for the adjustment of throw length.

Out of the box, there was some user adjustment - 3rd/4th gear felt ever so slightly off-center to the right compared to the Fanatec, so I'd bang into the gate occasionally. I've either adjusted to this or it's worn in, it doesn't happen anymore. The push-down spring to get into reverse is quite stiff, I'm still getting used to this, but it's not a complaint.

It has a pleasing sound, but I will say that the sound travels through my house (through a closed door and up some open stairs) more than anything else in my cockpit (including my surround speakers), when you are shifting with "enthusiasm" No one has complained, though - it's not that bad and it doesn't seem any louder than the Fanatec when you're in the room with it, so it must just be the pitch of the sound travels a bit more.

I'm looking forward to trying out the additional "shift lock" mechanism they're working on, but even without it, I'm very pleased.
Upvote 0 Downvote

I still want a stronger center spring. However after my last adjustment, it is working better for me.

Still I have lust for this piece of equipment when I'm still very meh about a DD wheel base.

I think when the hydraulic release is made available, I may snap.
Last edited: Jun 8, 2019
Upvote 0 Downvote 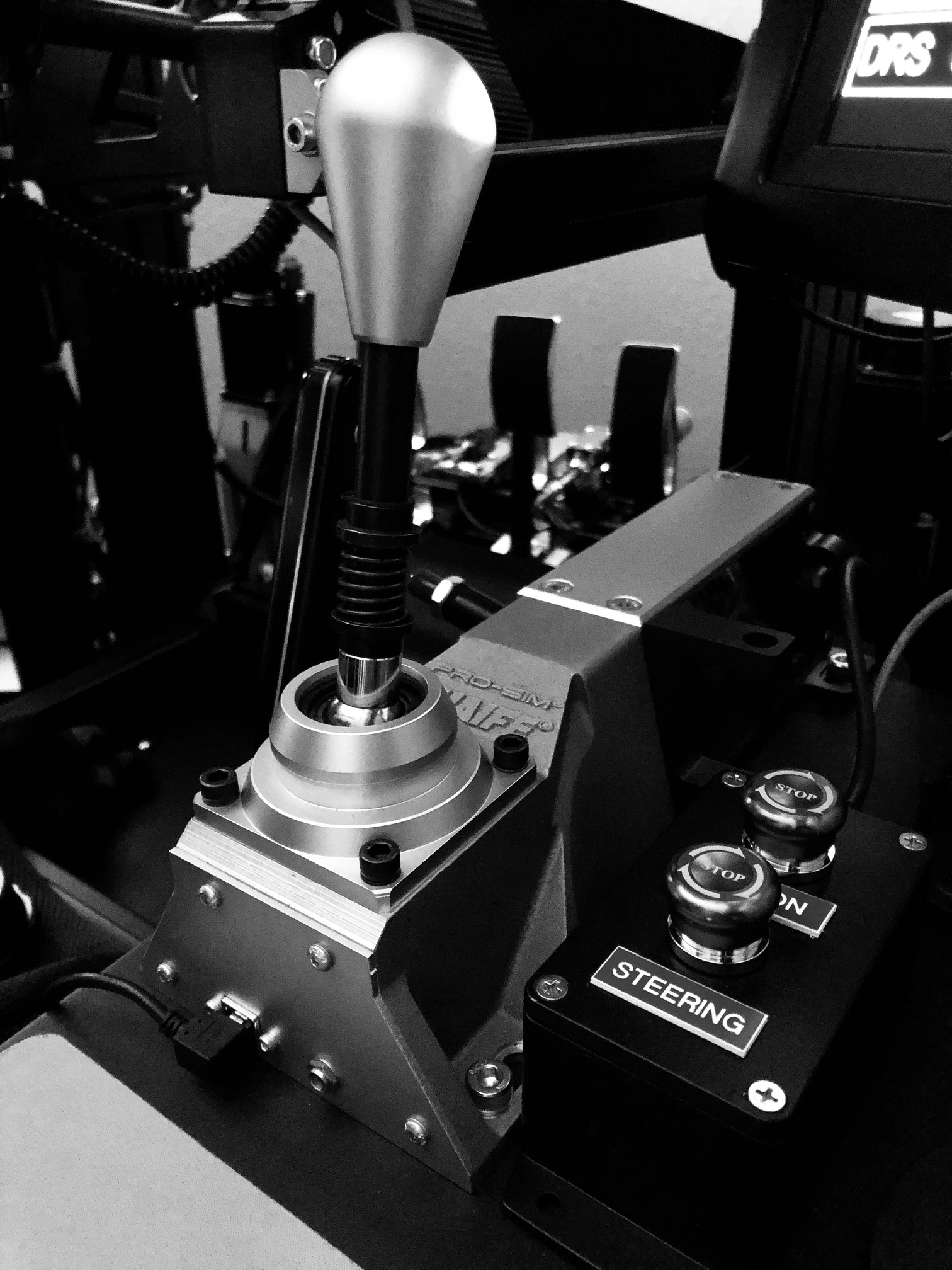 I can assure you that you need to let that one moment happen. I've had the Fanatec shifter and for the money it can't be beat but at the end of the day the only similarities between the two is that they allow you to shift gears.
The Quaife unit is amazing, not just a little amazing, but hold on to your seat amazing. It's as close as you'll get to the real thing without having to park it in the garage. Heck, even my wife made a comment on it when she was using the sim one day in a moment of delusion.
But if it were me I'd do the OSW wheel first (been down that route too).
Upvote 0 Downvote
S

Since I love rowing gears in a sim, I'm sure I'll end up with one. Maybe soon.

Not sold yet on which DD to get yet. Too many pros and cons for both right now. I'm not price sensitive, but I care about convenience.

So far I don't trust wireless BT on the SimCube 2, and I don't want a cable. So it's left me waiting for more information. Over time I'm sure there will be an obvious winner.

I absolutely do not want to debate this topic on this thread, please. I'm not in a rush at all. Not even remotely itchy.
Upvote 0 Downvote
S

Snajrog do you have a full colour photo of your Pro Sim shifter you could share?

I am very close to ordering one myself

sam75 said:
Snajrog do you have a full colour photo of your Pro Sim shifter you could share?

I am very close to ordering one myself

There are plenty of pictures on their website.
https://www.pro-sim.co.uk/shop/h-pattern-shifter/#tab-description

Then there is a review here that shows everything in detail.

I think some of the red has gone nowadays...certainly the bit under the gear knob...not sure about the red on rest of chassis
Upvote 0 Downvote

That's the first I've heard about that. The picture Snajrog posted is obviously B/W.
I would prefer a dark gray over the red, so I am curious about that. I'll inquire.

I actually attempted to order a few minutes ago, but I just got back from a trip outside the US and my CC company apparently thought it was fraud and rejected the charge.

Edit: A quick chat and it's ordered

I still got a text message asking me to verify it was a real charge after chatting with the representative who pre-authorized it for me. I'm not complaining. I'm actually grateful for their diligence about fraud. They've caught issues before and have re-issued my card twice.
Last edited: Jun 12, 2019
Upvote 0 Downvote

Snajrog said:
I can assure you that you need to let that one moment happen.
Click to expand...

That one moment happened. I knew I would eventually buy one, so why not do it now? And yeah, your praise of it helped push me over the edge.
Upvote 0 Downvote

RCHeliguy said:
That one moment happened. I knew I would eventually buy one, so why not do it now? And yeah, your praise of it helped push me over the edge.
Click to expand...

I'm good at spending other's money!
Requested color photo(s): Fresh out of the box at my office. 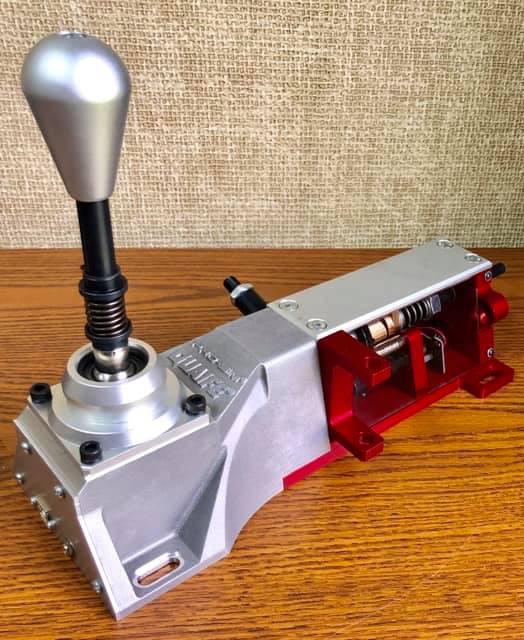 I'm really happy for you guys who have bought one, but I honestly can not believe that you would spend £1200 on a gear shifter!!!

I am toying with the idea of upgrading my perfectly serviceable T500RS for a £600 DD wheel base, but can't really justify the money. But £1200 on a shifter...?
Upvote 0 Downvote

Fat-Alfie said:
I'm really happy for you guys who have bought one, but I honestly can not believe that you would spend £1200 on a gear shifter!!!
Click to expand...

What you've got to remember is that EVERYTHING is relative. To some people with a game controller your T550RS would seem like a huge amount of money, never mind a direct drive steering wheel. That would seem completely obscene to them. The only reason you are considering this is because it is a priority for YOU.

What offends a person's sensibilities is directly related to whether they see something as a priority or a just toy and what they consider a "big purchase".

Money is not really the issue, priorities are. I have a serious issue with people who spend money on a hobby that takes away from their family, or other things that should be priorities for them. In that case a purchase can be obscene because a "toy" is taking away from something important. If someone buys a "toy" on a credit card that will take a long time to pay off, that bothers me. In my eyes that person is making a bad decision. It's their prerogative to do that, but it bothers me.

So people can make purchases that I consider obscene, but it has absolutely nothing to do with the cost and more to do with that person's circumstances.

I have a friend who built an 8 foot long turbine RC Jet that cost him $16,000. He built another that he crashed rather spectacularly and has a whole fleet of very nice scale WW II planes. He occasionally completely destroys one. I don't consider any of that obscene. He founded a company, has no debt, his kids are all out of college, he takes vacations all over the world with his family. His hobby isn't taking away from anything that matters and it's something he enjoys.

Does that makes sense?
Upvote 0 Downvote

Fat-Alfie said:
I'm really happy for you guys who have bought one, but I honestly can not believe that you would spend £1200 on a gear shifter!!!

I am toying with the idea of upgrading my perfectly serviceable T500RS for a £600 DD wheel base, but can't really justify the money. But £1200 on a shifter...?
Click to expand...

Then definitely don't look at any of the custom steering wheel threads.
Upvote 0 Downvote

Please don't get me wrong, I wasn't criticising you for spending that much on a shifter... I just can't believe that anyone makes a shifter that costs that much (and that people are prepared to pay it)

To be fair, I spend 90% of my 'sim time' making tracks and only 10% of my time actually driving. If I spent more time behind the wheel then I might be more inclined to spend more on my gear
Upvote 0 Downvote
You must log in or register to reply here.

Quick question about Clutches and H-Shifters?