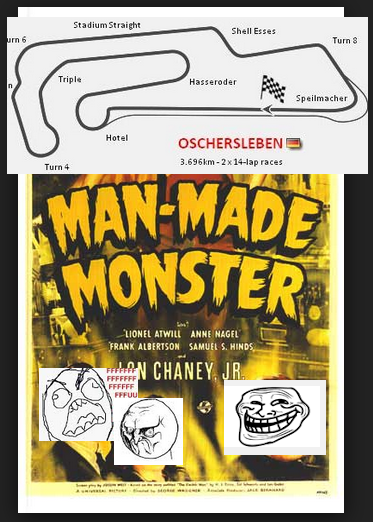 I raced online last night on ADAC 2014 kept finding myself missing corners after corners,
I started to dislike this track that somehow in GTR2 was one of my favorite. Maybe its the car... i am not sure but something happened.

So of course after a couple of round online and seeing @James Nance pulling some 1:26 during quali and probably in race vs me who could barely pull a 1:27 ( rarely ) , i decided to go race with Ai on that track to chill out, or maybe i just needed to win at something

I then realized that this track is the first one in the championship, So what the heck? let just do a championship instead.


So here if my question ( Yes this post has a point, i ain't just ranting.. Although i do tend to do that a lot )
Is there a difference in the game between Championship vs the leaderBoard with the car?
Or was i having a brain freeze and simply couldn't pull it together in the championship (probably).
Last edited: Dec 21, 2014

I advise you to delete the AI file first and start over. Maybe it's bugged because of all the updates with AI fixes.
R

I suspect that thetrs more rubber down on the track for qualy than practice, although you may well have taken that into account already.

Peter Koch said:
I advise you to delete the AI file first and start over. Maybe it's bugged because of all the updates with AI fixes.
Click to expand...

Peter, how I do that? What AI files?

See your doing just fine, speed is there. Now just be more consistent

Great track. Love it with DTM!
You must log in or register to reply here.

Creating a Championship in Single Player