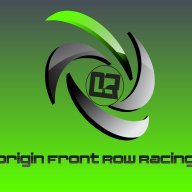 6 Months ago if someone would have said to you that the 1st race of the 2015 Formula SimRacing Season that the 1st 2 places in the World Championship would have been a Madcape and an Origin Front Row Racing Car you may have been sectioned for it.

But, as fate would have it, that's exactly what happened....

For us here at Origin, after bad luck had overshadowed our efforts in ACE and PRO, the World Championship made for a fairy tale ending to the weekend, far exceeding any expectations going in.

Despite a couple of test races it was still unclear to us exactly where we were in comparison with everyone else, and once Q1 got underway, it became clear that a chance of a podium in our debut race was a real possibility.

Kuba set the pace in Q1, and despite being only 0.8 off the fastest time, stand-in World Championship Driver Michi Hoyer could only manage 18th fastest. In Q2 Kuba couldn't quite make his starting position his team's name sake as his time was only good enough for 6th fastest. He would eventually start from 5th as Twister's Muhammed Patel incured a penalty.

Once the lights went out for the race, Kuba quickly dispatched Jonny Simon to move up to 4th, a crash by Joroen Kweekel moved him up to 3rd, and there he would remain until lap 15, when a disconnection by race leader Jim Parisis bumped him up to 2nd place.

Michi Hoyer had begun the race progressing nicely through the field and eventually saw himself running as high as 9th, but a spin into the wall on lap 6 put an end to a points finish. After his stop for a new nose, Michi had some clear air, and was able to lap the same time as the race leaders, what might have been if it hadn't have been for the crash. He would however finish the race of attrition 1 lap down in 12th.

Kuba meanwhile was wearing his tyres faster than Daniel Kiss, a late switch in strategy during the final round of pit stops did, initially, give Kuba the race lead and track position ahead of Kiss, however, it only took the Madcape driver 2 laps on the faster tyre to find his way past, and once he was through Kuba could only watch as the Black and Red Madcape disappeared into the distance.

The threat then came from Twister's Peter Brlyak, who with 1 lap to go was right behind Kuba, however, Kuba was able to hold on, to make it a dream start for Origin Front Row Racing, claiming a podium on their very first outing in the FSR World Championship.

Kuba, after the race was beside himself, and had this to say:
I was worried about extending during Q2 lap, I'm just so relieved, I was sure Peter would get me at the end, we benefited from the misfortune of others, but P2, I am so relieved and happy.

Michi had the following thoughts after the race:
'I don't know what caused the spin on the exit of turn 12, I must have underestimated the consequences of hitting the curb in that direction, in testing nothing like that happened there, it cost me 20 seconds and then I had an incident with Gennaro Celiento which was a bit of bad luck. He came out of the pits and I wanted to take advantage of my speed, I attempted a pass into turn 3, whcih meant me being on the outside of turn 2, but i didn't leave enough room, we made contact and we both spun, unfortunately for him it was race over I was able to continue.'

In ACE, Before the event even got underway, a registration error caused Abdoulaye Diop to incur a Back of the Grid penalty and Dawid Mroczek, despite being 0.7 off the fastest qualifying time, it would only be good enough for P20.

As the race got underway, Diop lost his front wing at the 1st corner, and Dawid was caught up in the huge crash at Turn 12, Abdoulaye eventually retired from the race, Dawid, however, was able to recover to an extent and brought home his Origin in a respectable P11.

After the race both drivers were disappointed, and are already looking ahead to Malaysia, and quickly forget about Australia.

In PRO, Renan Lopes and last minute replacement Andrea Ventura with the departure of Rando Tamm were the 2 drivers this weekend. The bad luck in the lower series continued for Origin Front Row Racing, Renan was nursing a damaged steering wheel and lag throughout the event, however he just missed out on the top 10 shootout, and started from P11. Andrea, who only drove on the mod for the 1st time on Wednesday, managed P13 on the grid.

At the 1st corner, both drivers were caught up in a crash and dropped to 15th and 16th, from here they would run in tandem for a while, and moved steadily up the field, at 1 point both were as high as 9th and 10th. However, Renan's steering issues and lag eventually forced him into retirement on lap 21, running wide on the exit of turn 12 he crashed into the wall, losing both wings, and collected Michele D'Alessandro when trying to move his car.

Ventura on the other hand, drove smoothly and brought the car home in P8 on his FSR debut, a very respectable effort from him, and we at Origin are very happy with his performance this weekend despite how little he knows the mod.

However for Origin, who just 6 months ago would never have dreamt of being in the World Championship right now are on cloud 9. Ryan Winsper, Origin Front Row Racing Team Manager, spoke afterwards and had this to say:
'Its a proud day, I hope it continues throughout the season and we pick up as many podiums as possible, this is just fantastic. I never expected this last season. Kuba is the man of the hour.'

Off to Malaysia this weekend for Round 2, will Kuba's rise to stardom continue? Will Michi's fortunes change? Will the luck be with the ACE and PRO guys?

We will of course, find out next time.
Reactions: Javier Alvarez, Nick Rowland, James Early and 2 others