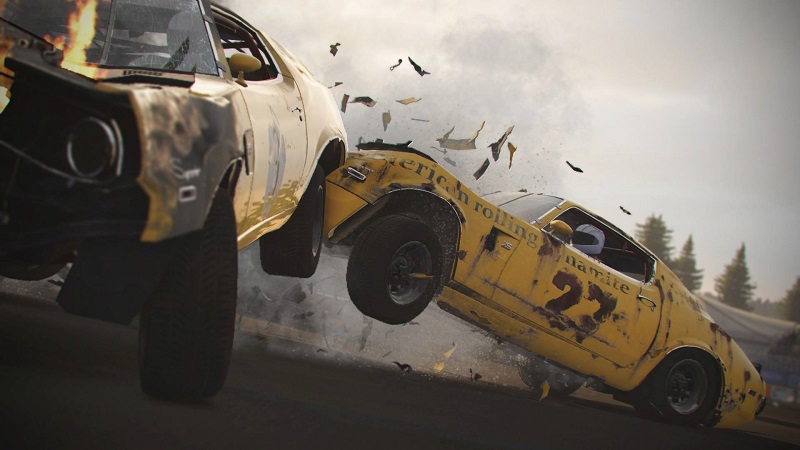 Bugbear Entertainment has been working on a new demolition racing game, playfully dubbed Next Car Game. With the help from the very active community the game now has an official new game: Wreckfest.

The following press release issued by the Finnish development studios, previously responsible for the FlatOut series and Ridge Racer Unbounded, emphasizes more on the new name for their game:


The term wreck fest refers to a chain collision of cars in high speed racing. As our game is all about the madness of colliding cars at breakneck speeds, a term describing the glory of tearing metal is nothing if not apt.

Wreckfest has also evolved to include 18 player multiplayer! The players can now challenge their friends to share the most visceral demolition racing mayhem in existence! With four different game modes, Racing, Derby, and the new Deathmatch and Team Deathmatch, Wreckfest’s conjunction of purity of driving and the innate beauty of twisted metal creates massive amounts of emergent glee when punishing your friends and foes alike.

The newest release also introduces a new European coupe car, a beast difficult to master but a real contender on both racing and derby matches. We have also added a new two-for-one track, Speedway, to the game, letting the players enjoy both the oval circuit and the figure 8 track inside it. This adds up to ten different racing tracks, and five cars to select as their weapon of choice. As players aim straight for the tender spots, our in-house engine ROMU provides impressive physics and detailed damage modeling to ensure that the crashes both look and feel glorious.

As always, remember that Wreckfest is a work in progress. Although the prevalent bugs are a part of all Early Access games, rest assured that we’re making it better, every day. Players can submit their ideas on our own community forums, and help us make Wreckfest, already an amazing demolition racing, be all it can be.
​
For more on Wreckfest visit the dedicated forum.

I thought it was going to be FlatOut 4

I originally thought Next Car Game was an awful name and it actually grew on me over time. I think they should have kept the old title.
Last edited: Oct 9, 2014

I am addicted, keep giggling like a 12 year old girl every time I smash someone into the wall.

well i`m sure it could be worst but it is kind of terrible name ... If i see "Next Car Game" in some list of games with cars when I`ll be looking for something new to play I would probably take I look at it, seeing "Wreckfest" I`m automatically passing to next one ...

Even though it did not make much sense, I kind of liked the name Next Car Game.
Not so sure about Wreckfest

Looks like Gran Turismo Quick Match has to come up with a new nickname.

Premium
I don't mind the new name. I don't think it does justice to the sophistication of this game but I can think of a lot of names that would have been worse. Maybe you should carry the "Next cvar game" monicker as a tagline. "Wreckfest - the next car game"
D

I don't think the name is just so terrible.

Anyway, what really matters is if the game will be good (and this is what I hope).

Perfectly good name for such game imo. I was pleasantly surprised how good this game is already.