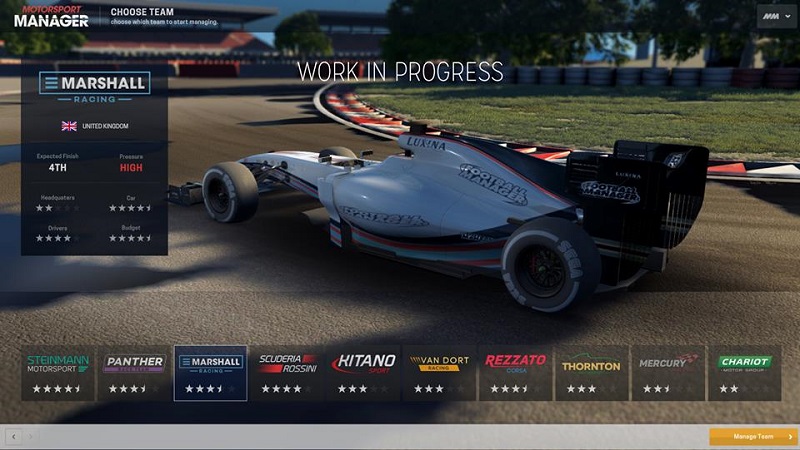 Playsport Games and SEGA Publishing Europe have released several new images and videos recently of the soon to be released Motorsport Manager for Windows PC, Linux and Mac.

Motorsport Manager is being published by the same people behind the hugely successful Football Manager series of games, and moves over to PC following the successful iOS version of the racing management title. Just as one would expect from a management game themed around a virtual Formula One style environment, players will have to engage with the many aspects of developing and maintaining a successful open wheel racing team in the pinnacle motorsport racing series. From car design and development, acquiring sponsors, developing your factory and signing drivers to your new car, Motorsport Manger aims to recreate the high pressure experience of running a top flight racing team.

Fleshing the title out considerably from their mobile device game, Playsport Games seem to be building up a thorough simulation experience. As can be seen by the many preview videos and still images, the game looks to have a clean and stylish feel whilst attempting to display the many areas of information the player is required to engage with in order to progress the car and teams development. Attractive 3D scenes representing the circuit and car detail go a long way to visually breaking up the masses of data on screen, and seem to have a natural ambiance that on early inspection looks very well suited to the title.

Time will tell as we see if Motorsport Manager can reach the heights of popularity achieved by Football Manager and its predecessor Championship Manager back in the early 2000’s.

Motorsport Manager will be available to purchase this September.

To give you a taste of what is to come, have a look at the below preview videos as the studio explain in more detail what players can expect to find once the game is released in September.

Check out the RaceDepartment Motorsport Manager sub forum for the latest news and discussions regarding Playsport Games management simulation title.

Are you looking forward to MM? Do you think the game can be a hit on PC? Will you be making the purchase on release day? Let us know in the comments section below!
Last edited: Aug 8, 2016
Sort by date Sort by votes

It does look promising. Just less inclined to buy in when it releases next month if it's exclusively Formula racing, I don't know if that'd be enough content to keep me playing. Looking forward to the reviews.
Upvote 0 Downvote

Obviously it will appeal to some, but not me.
Upvote 0 Downvote

I'm too lazy to race in the sims and there is no decent manager games... this will be very welcome!
Upvote 0 Downvote

I'd prefer to use the term, understandable
Upvote 0 Downvote

Great, have been playing it on may Android phone for a while
A great game
Upvote 0 Downvote

My future brother in law works for Sega and I got a polo shirt and cap...
Sorry but that's all I know about this title so far... lol
Upvote 0 Downvote

Bit misleading to say it's from the same people as Football Manager, the only thing they share is having Sega as a publisher.

Hopefully this is fair bit more advanced than the mobile version. I enjoyed it on mobile but lost interest very quickly due to the lack of major options for development and strategy. So if the PC version is just a prettier version of the mobile game I'll be very disappointed.
Upvote 0 Downvote

That isn't the main issue for me, as these games tend to be easily moddable when it comes to teams and drivers (even the piss poor Racing Manager was moddable).

My main issue is that they use fantasy tracks.
Upvote 0 Downvote

I played the mobile version - very well done and a blast for 3-4 seasons, but then it got extremely repetitive. From what I've read of the PC version, there will be some additional game mechanics that will help alleviate the repetitiveness present in the mobile version.

Just my opinion, but the lack of licensed teams/tracks/etc doesn't really bother me in this sort of game. It would probably jack the price up and I really don't feel it adds much to the experience (plus, I'm always nervous that the developers could be influenced by outsiders rather than striving to make a well balanced game).
Upvote 0 Downvote

You want to join in, but all you can do is watch and hope for the best.
Upvote 0 Downvote

I may consider getting this game if they add GT3s and/or Touring cars...
Upvote 0 Downvote

Well it's Sega.. they know how to make a manager right?
I am excited and i want it to be good!!
Just to prove that im better than the ferrari strategy group
Upvote 0 Downvote

Ole Marius Myrvold said:
My main issue is that they use fantasy tracks.
Click to expand...

In a management type title I really don't mind at all. Starting without the prior knowledge colouring your decision making is a plus point for me. tbh I kind of hope there is the ability to randomise everything, the starting drivers found in the world, team names (or at least who the good teams are and their level of development at hq etc) and the like. It's good for longevity to start these types of games in an unknown fresh world imo.
Upvote 0 Downvote

Not able to add multiple sets of tyres?