Ive heard this rumor going around that the games that ive played in my early childhood constantly is cut. Discuss?

Staff
Premium
good, glad to see the back of it personally. the old ones where good but the lastest few incarnations have not been so good. get old too quickly and very little new has been brought to the table. after the latest one i can't say that im too suprised. not exactly gone down the storm they were expecting.

Not more than a month after the release of Need For Speed: Undercover, the Electric Playground is reporting that Electronic Arts may be cutting the franchise entirely. The videogame web show claims that future titles in the series have been canceled.
S

from joystiq, they said it will have the same engine as burnout because it will go to Criterion Games. ???

NFS has killed its self. Its gotten worser and worser every step of the way. The orginial Need For Speed had to be the best. Just about Fast Cars, races in the country side and streets and dodging the police as you went on.

Brad Johnson said:
NFS has killed its self. Its gotten worser and worser every step of the way. The orginial Need For Speed had to be the best. Just about Fast Cars, races in the country side and streets and dodging the police as you went on.
Click to expand...

Totally agree.
As good as I can remember it was hell of fun (although I must of been younger than 5 and can't REALLY remember)
N

i remember playing the original nfs on the ps1 when i were a wee nipper...

cant say i was drawn to the latest shiney-modify-the-heck-out-of-everything-for-the-sake-of-it-go-faster-and-get-all-the-girls editions...

I liked NFS 4 the best. The first 3 were also good, I played a lot with NFS 2. NFS PU was still good, and maybe Hot Pursuit 2, but after that they've gone totally wrong way...

Premium
For me NFS 2, 4 and Porsche Unleashed were the bests...I hope they return to old style..

Staff
Premium
I get the feeling they will sit on the name and probably release somethign widly different from what we've seen over the last few years in the future, probably after the next round of console releases. A return to a more thoroughbred type of racing would be good and probabkly would be needed to get decent sales.

On a plus point for the software industry in general it does open up the opportunity for some smaller studios to develop and release games in a similar mold to the current generation NFS unopposed, there might be a real gem hiding away out there now preparing to be exposed to the light of day.

THE need for speed franchise died off after all the Neon lights/Drifting/sport compact tuner phase died off with the Fast and the furious movie series.

Paul walker should die for that movie. "I live my life a quarter mile at a time" The 1/4 miles which are supposed to be "10 seconds" the scenese last 5 minutes. Stupid movie


Remember Blimey Games that passed away a couple of weeks ago and became Slightly mad studios?
http://forum.racedepartment.com/pc-...y-slightly-mad-studios-formed.html#post211354


Well guess what their first game is.....
A simulation version (yes thank you for hearing my cry EA for it back to its roots) for Need for Speed.
http://www.gamesindustry.biz/articles/ea-reboots-need-for-speed-with-three-new-titles-in-2009

Electronic Arts is to move its Need for Speed racing franchise into three distinct genres, as it breathes more life into a series that has sold almost one hundred million units.
This autumn will see the release of simulation game Need for Speed Shift and arcade racer Need for Speed Nitro, while later in the year, EA will release the free-to-play action MMOG Need for Speed World Online.
"Our fans have been sharing with us their varied takes on the racing genre and it is clear that despite the huge mass appeal of Need for Speed’s action-driving games, there are large groups of consumers who appreciate different takes on racing games," commented Keith Munro, VP of marketing at EA, to our sister site Eurogamer.net.
"A few years ago we decided to respond to this reality, so we are taking the franchise down some new paths by delivering three distinct experiences: simulation, action and arcade.
"This isn’t about quantity, this is about crafting different games for different audiences and their unique tastes in the driving category," he added.
Slightly Mad Studios – made up of former GT Legends and GTR2 developers – will work on Need for Speed Shift alongside Black Box producer Michael Mann, and senior VP of EA Games Europe, Patrick Soderland. The title will be released for PC, PS3, PSP and Xbox 360.
For the Wii and DS, Need for Speed Nitro is in development at EA Montreal, while Need for Speed World Online will be co-developed by Black Box and EA Singapore.
Exclusively for the PC and to be released first in Asia, the game will be part of the Play 4 Free range, which currently includes FIFA Online.
"Once Need for Speed World Online has been successfully deployed in Asia, we will expand the game's reach by offering the service to PC gamers around the world," said Munro.
He also revealed that as well as Nitro, EA Black Box is also working on a "future action title in the franchise".
Despite four titles in the works, Munro insisted that the company is not milking its franchises, rather tailoring them to different needs and consumer demands.
"I would say that our strategy is the inverse of milking; it is an intentionally non-traditional approach," he said. "We are creating different racing games in different sub-genres, and this will become clear as we reveal the titles over the course of 2009."
Click to expand...


Share your thoughts here (about the past ND4SPD and the ND4SPD: Shift) and some screenshots :wink:

Amazing!!! This autumn! Wow! Can't wait to see it, I hope they'll make a demo! 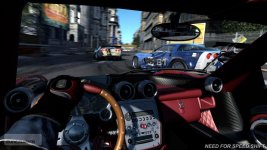 Premium
wHAT? NFS will be cool after all.... good news.
R

@ Péter: I had exactly the same worry. I'm afraid this will be a no go for my 7600Nvidea... (or with all to minimum).
But still I'm very curious on what EA is cookin' for us (us = simracers).
At least there will be a Zonda and some Corvette's in the game.

Yeah the Zonda F interior is cool
You must log in or register to reply here.