My thoughts on the Rosberg/Hamilton Spa incident.

I am English, so as you can imagine, I am a Lewis Hamilton fan, however, I have been a fan of Nico's for such a long time. I have never seen Rosberg be the kind of driver who would purposely damage another car (or use yellow flags to slow down a team mate during qualifying) to gain an advantage. Rosberg has always come across as a nice guy, and a true professional.

What I see here is something that could easily be a racing incident, or easily be an attack on Hamilton by Rosberg. It's really hard to say for sure, and I always try my best not to be biased in these situations.


The reasoning behind it being a racing incident:-

1) The stewards gave no penalty and claimed it was a racing incident.

2) Rosberg took damage too, and it cost him a possible victory.

3) In the heat of battle, even the greatest drivers can clip each other, and that's all this was, a clip from Rosberg's wing.

The reasoning behind it being an attack on Hamilton:-

1) After the frustration of Hungary, Rosberg had a motive.

2) Purposely aiming for a wheel with a front wing is bound to destroy the other car, while you can replace the nose.

3) Being in the lead of the championship meant it didn't matter if both Lewis and Nico retired, it would mean one less race for Lewis to catch up.

4) Course direction. Rosberg, behind and alongside Lewis, had to correct the car as he was on the dirty side of the track and not on the racing line. Instead of driving straight, braking, or steering left and over the run off (like Vettel did), Rosberg snapped it back to the right at the exact moment he could "aim" for the wheel with his wing.

5) The straight leading up to the corner is an overtaking place, during the corner, and leaving the corner, is NOT a place to overtake (unless the other car is breaking down) and should be treat like Monaco. I know this because I have raced online in F1 games, and I have never overtaken somebody in that corner, so Rosberg had no right to be where he was at that moment. If it was me, I would have braked, got back onto the racing line, and continued the fight down the road.

6) Drivers do know where their nose is, Drivers like Rosberg and Hamilton have spent years driving cars like these. They know the limits, even if they can't see the limits. Rosberg knew his nose was too close to the wheel of Lewis, but decided to keep going anyway.

7) Rosberg never took responsibility after the race. Instead of apologizing, he refused to comment, and instead waited almost a week later to apologize and take the blame for the crash. If Rosberg did do this on purpose, the steps he took after the race shielded him from possible penalties, meaning he would keep the 18 points.

At the end of the day, if I was to aim for someone's wheel, that is exactly where and how I would do it. On the other hand, if I was a driver fighting for a World Championship, I would rather beat my rival fair and square. Only Nico really knows if this was on purpose or not, but it's clearly Rosbergs fault, due to the reactions of Paddy, Wolff, and the admission from Rosberg today.

I won't call Rosberg a cheat, because it can't be proven, but it is quite suspicious, and some people love to jump to conclusions so they have more reasons to boo the driver. It wasn't just Lewis Hamilton fans (or British fans) who boo'd Rosberg on the podium.

It didn't help that Lewis misinterpreted Rosberg after the race and told the media that Rosberg claimed to have done it on purpose. That added more fuel to the fire. Why would any driver purposely admit to something like this if they did actually do it? To gloat? To prove a point? What's the point to be made? There isn't one. If anything, someone who did this on purpose would never admit to it, they would only admit to it when they are 70+ years old and approaching death.

This incident comes at the worst time for Lewis, and the best time for Rosberg. If this incident had occurred in Australia, it wouldn't have been as much of a big deal. The good thing to come out of this is the publicity and it heats the rivalry further. This is what F1 needs sometimes, a bit of controversy. I feel sorry for all of Lewis's bad luck. I applaud Rosberg for his consistent driving, and that one incident in Spa is the only time he has done wrong so far this season.

So the final verdict... innocent until proven guilty. It was an incident caused by Rosberg, which the stewards deemed a racing incident. Was it malicious? Probably not, but there is still that 1% chance that it could have been, so instead of focusing on that slim percentage, don't let it consume you. Not unless you have other evidence to bring forward? 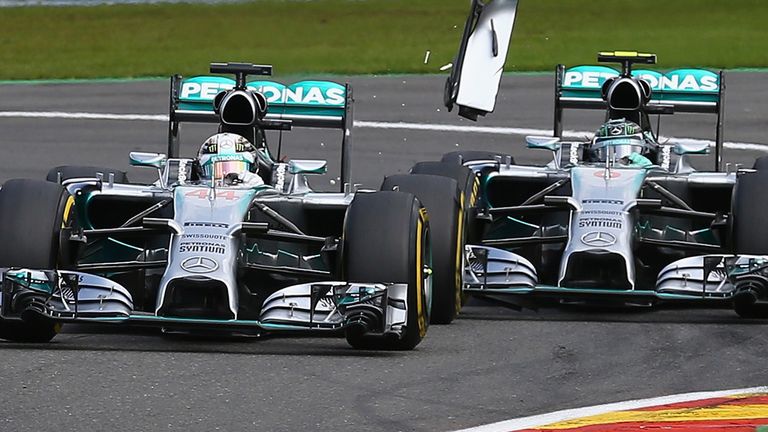 Thanks for reading. Have a nice day.​

A very level - headed examination, something quite rare among most fans (at least the ones that reach our ear).

Premium
From my point of view there's a much easier explaination (or let's call it possible scenario).

Rosberg tryes to hold the outside line as long as possible. When he notices Hamilton won't give him the room, he backs out. Hamilton comes closer to Rosberg when he crosses the road to claim the next apex. That's when Rosberg turns away to the left. When Rosberg thinks he has backed out enough and could still keep it on track he turns right again. Unfortunately the gap should have been a few inches bigger so the front wing touches the rear tyre. End of story.

We've seen this kind of accidents so often but now it shall be on purpose?

I bet it's very hard to judge the exact position of the front wing considering they are nearly lying in there cars. Now add the short time to act/react and the risk to have a DNF yourself if tyres collide or the broken wing gets under your car. And Rosberg was in a better championship position. So I do more believe an a close call and an unfortunate collision in the heat.

But good it happend to them, so the media can create some nice stories.

Premium
I am not a fan of any particular driver, I just like seeing good racing. From my perspective the sad thing about it all was how it was handled more than anything. First by the media just blowing it up way out of proportion but more so Mercedes themselves. Lauda telling the media it was all Rosberg's fault immediately after the race, Wolff almost having a seizure from being so angry, Rosberg's post-race interview, Hamilton adding fuel to the flames after the team meeting. Everyone is talking about them and the incident rather than the actual race and the Ricciardo win. I have to imagine it might have been dealt with better if Brawn was in charge.

But F1 + controversy go together like Bernie and revolving doors. All I can say is Monza will be interesting.

Premium
Yes, it's all like a big soap opera with its stories. They seem to be a bigger selling factor than the sport itself. Considering this and the fact that sex sells very well too, I wonder why we only have grid girls. How about some grid men? This could attract some more female viewers (and gays of course).
M

Premium
To be honest I think it is a bit of both. With the battle in Bahrain in mind I think Rosberg wanted to make a point that he won't back down. But on the other hand I don't think his intentions where to knock Hamilton out of the race. So in short to much testosterone and not enough common sense.