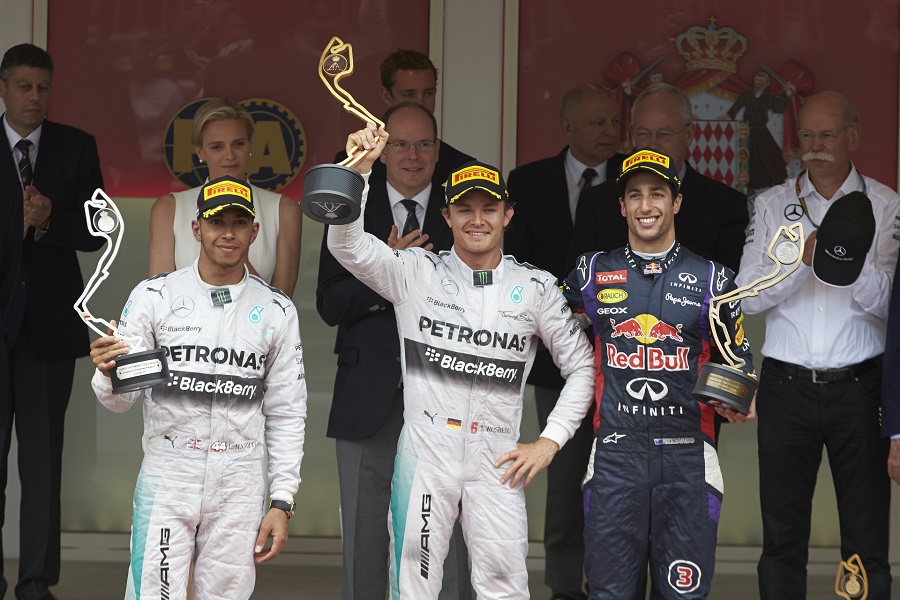 The small principality situated in the south of France hosted one of the most anticipated races of the season. Partnered with glamour, celebrities and an historic race track, the 2014 Monaco Grand Prix provided a spectacular race for spectators.

Marcus Ericsson started from the pit lane after receiving a penalty for an incident with Felipe Massa in qualifying yesterday, and it wasn't long before the tricky streets of Monaco took its first victim. Sergio Perez crashed out on lap 1 heading out of Mirabeau after pulling out of an attempted over take of team mate Nico Hulkenberg and hitting Jenson Button, causing the Mexican to crash out and caused damage to multiple cars, thus resulting in a short safety car period.

A tricky race for Renault powered cars started with Maldonado not being able to start the warm up lap, and unfortunately meant that he was unable to start the race. The race continued to be a poor one for cars holding the Renault power unit; Sebastian Vettel was the next victim. Vettel was heard over team radio complaining about "no power" on lap 4, and subsequently retired on lap 8 after pitting only a few laps before. It also wasn't long until young Russian, Daniil Kvyat, was the next to retire in his Toro Rosso on lap 13, showing there was an obvious problem with the Renault power units.

The race wasn't all just engine failure, we saw some spectacular passes made my numerous drivers. Adrian Sutil made an early pass on Romain Grosjean through the hairpin, and made a similar move to pass Marcus Ericsson only a few laps later, a move Sutil was also noted for last year. Sutil also passed Max Chilton into Nouvelle Chicane before losing his rear laps later into the same chicane and hitting the barriers, forcing the German to retire. 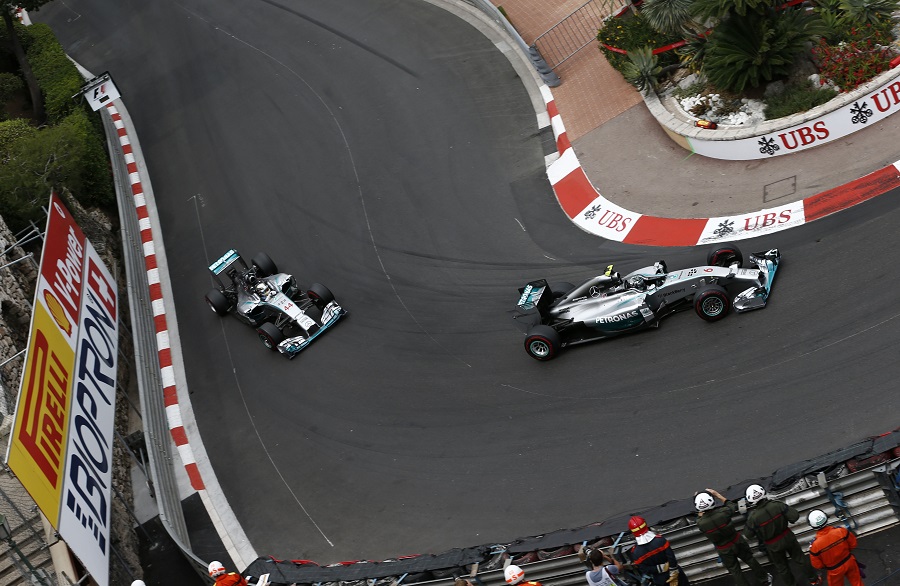 Image: Mercedes AMG Petronas​
Sutil's retirement caused the safety car to come out a second time. The safety car caused some conflict, as the two Mercedes cars chose to pit as the safety car was called, not before despite the fact Lewis saw Adrian's crash. Hamilton was heard over the team radio complaining about Mercedes choice of when to pit, "We should have pitted on that lap (before) - but I knew you wouldn't call me in guys".

Frenchman Jean-Eric Vergne had a tough race, after receiving a drive-through penalty after an un-safe release and nearly colliding with the McLaren of Kevin Magnussen, his race was ended on lap 52 as images showed smoke pouring out of his engine during his pursuit over fellow country man Jules Bianchi. Leaving only 1 out of the 4 cars in the Red Bull family left.

Only a few laps after Vergne's retirement Bottas was the next driver to experience engine troubles, stopping his Williams on the track. The next driver to be taken by the harsh streets of Monaco was Mexican Esteban Gutierrez, who hit his right rear tire on the barrier at Rascasse and caused him to spin out, therefore retiring from the race. Both Sauber's and Toro Rosso's out of the Grand Prix.

As the race drew to an end the excitement grew, a radio message from a frantic Hamilton saying "I can't see out of my left eye - I've got some dirt or something in my eye." began the exciting last laps. With 7 laps to go Daniel Ricciardo was just 5 seconds behind Hamilton, gradually closing in and threatening the Brit's 2nd place. Jenson Button was also another driver who performed well in the closing staged of the race, passing team mate Kevin Magnussen before catching Hulkenberg and putting pressure on the Brit. 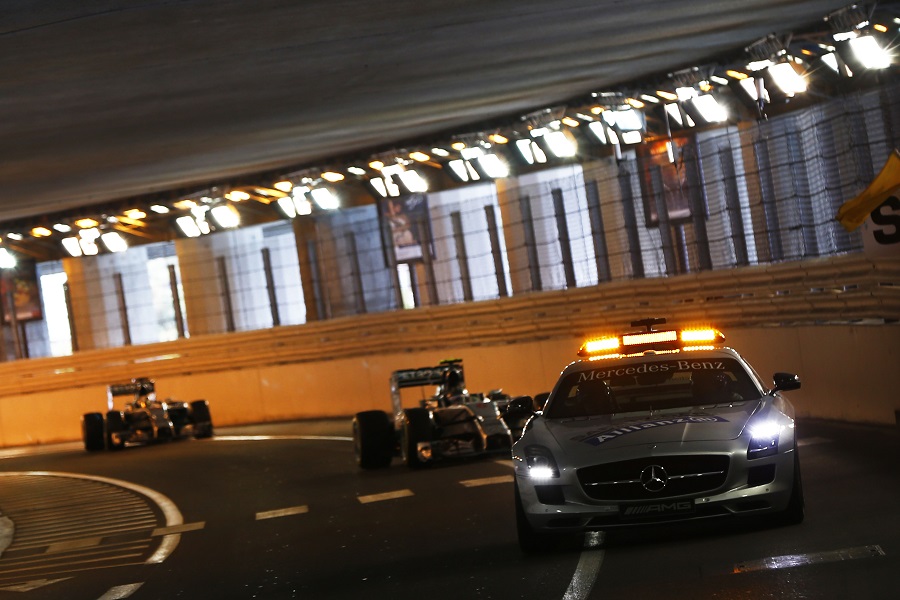 Image: Pirelli​
Kimi Raikkonen ruined his race as he attempted to pass Magnussen into the hairpin, however over pushed it and caused the Finn and the Dane to lighting hit the barrier, before continuing to race. This move by Raikkonen helped Frenchman Jules Bianchi push his Marussia up to 8th place.

Bianchi had a race of two halves, originally having a 5 second stop-go penalty, along with Gutierrez and team mate Max Chilton, for starting in the wrong grid spot caused by confusion over Maldonado not starting. Unfortunately Bianchi took his penalty during the safety car, resulting in him gaining the penalty again, however since he did not pit again the 5 seconds got added to his time at the end of the race. Bianchi finished 9th, after starting 21st, claiming his first points in F1 and Marussia's first points since their start in 2010.

Nico Rosberg raced a fault free race and won his consecutive Monaco GP 9.2 seconds in front of team mate Lewis Hamilton. The Red Bull of Daniel Ricciardo who was only 0.4 tenths off Lewis' Mercedes, the Aussie claiming his second official podium of 2014. 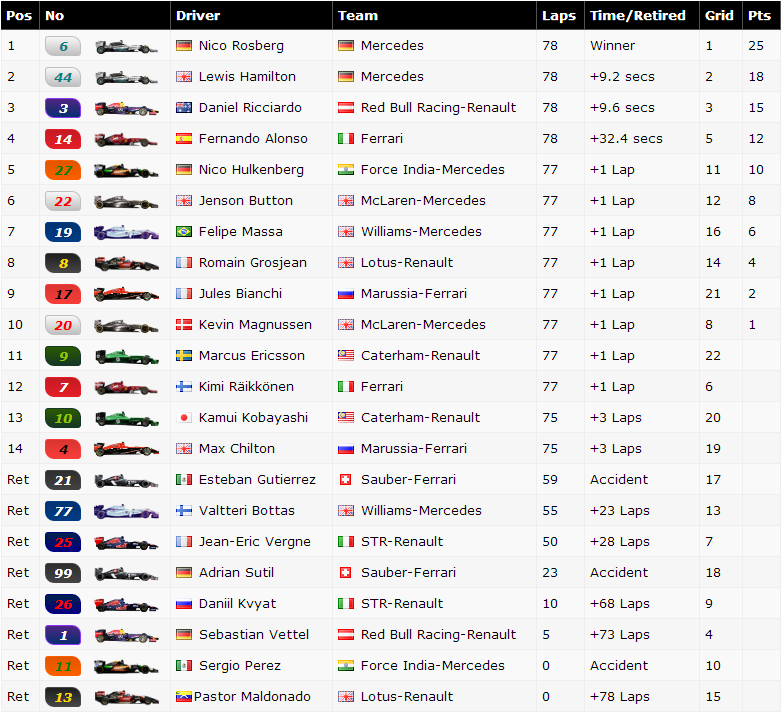 Where did you get that results table?

Still think that Rosberg will claim the WDC this year. He is so cool headed, reliable and ultra consistent. Surrounded by an aura of a champion.

And now Hamilton and Rosberg relationship turn from bad to worse. Too bad

Premium
"Leaving only 3 out of the 4 cars in the Red Bull family left."

Still think that Rosberg will claim the WDC this year. He is so cool headed, reliable and ultra consistent. Surrounded by an aura of a champion.
Click to expand...

I really hope he does, he has been with the team for so long and been a huge factor behind them getting to where they are now. Lewis just joined at the right time and it wasn't hard considering where McLaren were heading I guess.

I've never been a fan of Lewis, his talent is undeniable but the way he conducts himself in the media, particularly this season, is not that of a world champion.
Last edited: May 26, 2014
M

Premium
What about Ricciardo? Great job from him. He definitely has the upper hand at RBR for the moment. I think when Vettel has sorted out his car troubles he has to fight Ricciardo and he doesn't roll over that easily.

Great to see Marussia get their first F1 points. A pity tail-end Chilton couldn't move up a few places - but at least he kept his 100% finish record.

Ken Hughes said:
but at least he kept his 100% finish record.
Click to expand...

That is becoming rather impressive now

Bram Hengeveld said:
That is becoming rather impressive now
Click to expand...

But pointless Stay at the back of the pack, don't put any stress on the car's moving parts and a trained monkey could finish every race - even if it is three laps behind the winner.
J

Well, for a pay driver he's doing a better job than Maldonado.