Hello everyone, I've started this thread to introduce my project, show the techniques and methods I will be using and hopefully maybe inspire a few of you to try something similar.

I've been messing around modding simwheels for over 10 years now, going all the way back to the OG Logitech Driving Force Pro. I've always wanted to create an 'ultimate' wheel, no expense or detail spared to create a real work of art.

My project is a faithful interpretation of a modern F1 wheel, using the LCD display as opposed to the old 8 bit style. I will be using an out of autoclave pre-preg carbon fibre to make the wheel, this will give it the finest quality finish possible. I will be drawing it up on CAD, and then 3d printing that model to create a blank for the mould. Once I have the moulds I can create the final piece in carbon fibre.

This is intended to be a personal project but if there is sufficient interest but/and most importantly IF i am happy with the standard of the project I would consider doing a small production run for any interested parties.


First step is drawing out the cad models, the trickiest part is defining the actual dimensions, It's very hard trying to decide the dimensions of something so tactile on a virtual drawing. I've been using as much reference material as i can get my hands on, short of measuring up an Amlgam replica or even the real thing I think it's as good as i can get. My second issue is that I have zero experience of CAD software. After Faffing about with FreeCAD and getting lost in the UI I gave Autocad a try and found it much more intuitive. A few youtube tutorials later and I've got some models that i'm happy with. I am just scratching the surface of what Autocad is capable of, but after comparing the space allotted for the screen on my CAD model and the actual dimensions of the Sim Display LCD that ill be using they are near as bang on. Not bad for a 'freehand' approach.

The Pictures below outline my method to break down the structure. The front plate will have the display and the majority of the switches/electronics mounted up to it. The Carbon Fibre will give it great strength but it wont be load bearing in the same way that the rear assembly will be. the front will bolt on neatly to the rear assembly, the handles are also split and the front half are separate pieces again that will simply bolt to the rear pairs. The little dimples all over the structure are there to locate the holes for the switches. A hole in the mould blank will leave a little bump in the actual mould, then when I come to lay up the carbon over those bumps it will give me a repeatable and accurate dimple to drill the switches

The rear structure will have to take the full torque, vibration and general abuse that a servo motor can spit out. The advantage of using carbon fibre like this is that I can lay up additional layers around the key load bearing areas such as where the quick release will bolt on, where the handles attach etc. Building up strength in this way should give a bulletproof design but also save material and space for the internals where more than the cosmetic weave + reinforcement isn't needed. Ill take a view after the first one is produced, from what I've seen the two layers should be just fine but i want to make sure this thing is bulletproof so I expect I will 'overbuild' on the first one.

A quick note on the rear, there is a distinct join where the handle mates to the main body, the 'lower' of the two if it was the correct way up. As this is a key area for strength I would have liked to widen it out so it blends more seamlessly and gives more space to lay up reinforcement in there. Unfortunately my Autocad skills were not up to that, If I think it's still an issue when I've got them 3d printed i'll bulk it out with a modelling clay or a filler to make the final mould blank thicker in that area.

Finally, the indented squares on the rear are perfectly sized to accept Ascher Racing shifters just to the limit of their throw. the tight corner does give me concern about lay up of the material around the join to the outer perimeter. I will decide what the best placement is and i can always fill it in to a new depth or even completely if i decide the ergonomics need it. This can only be done once I've got the 3D prints in my hand but printing is now the next step.

Hope to give you updates soon! 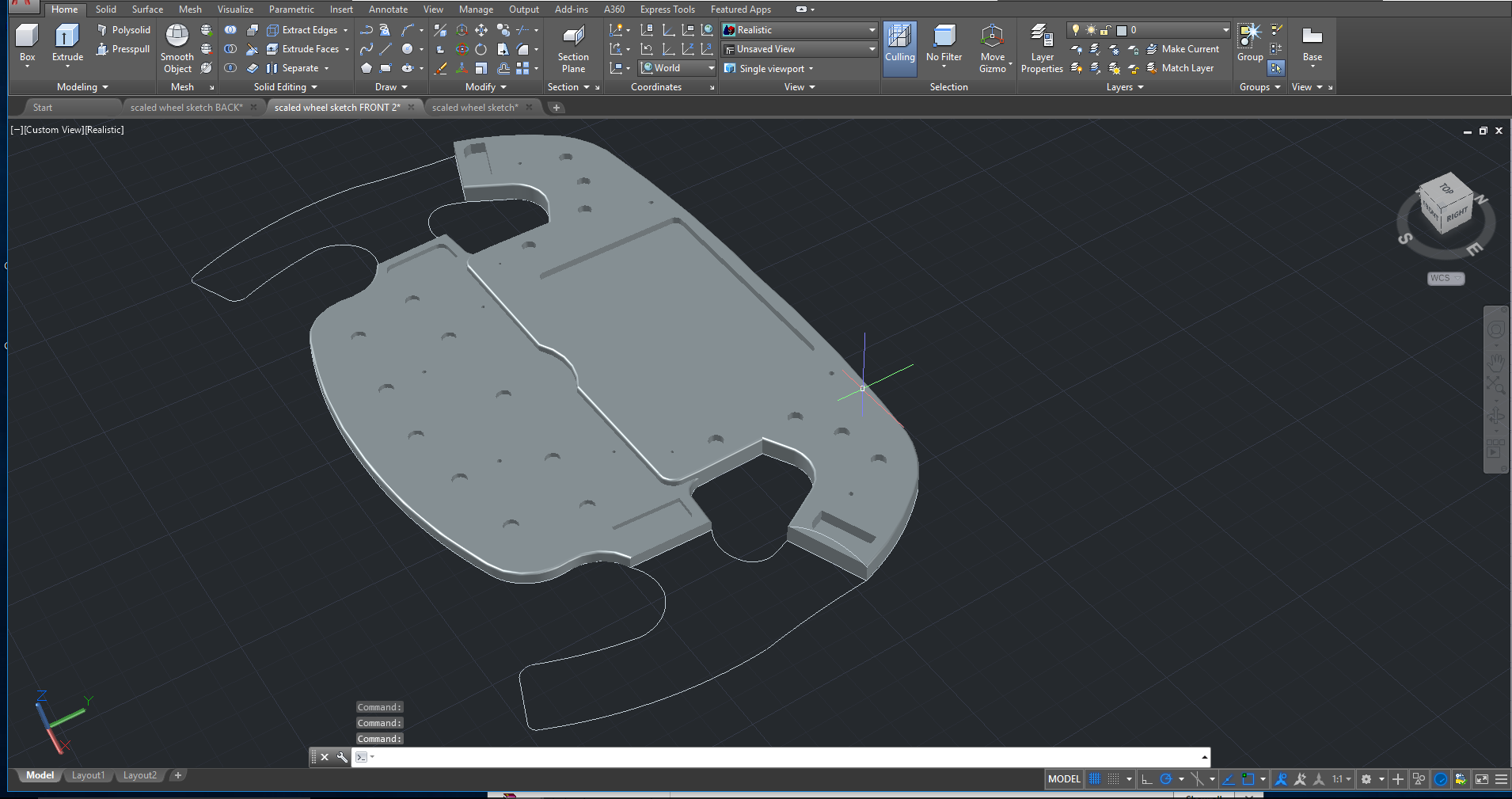 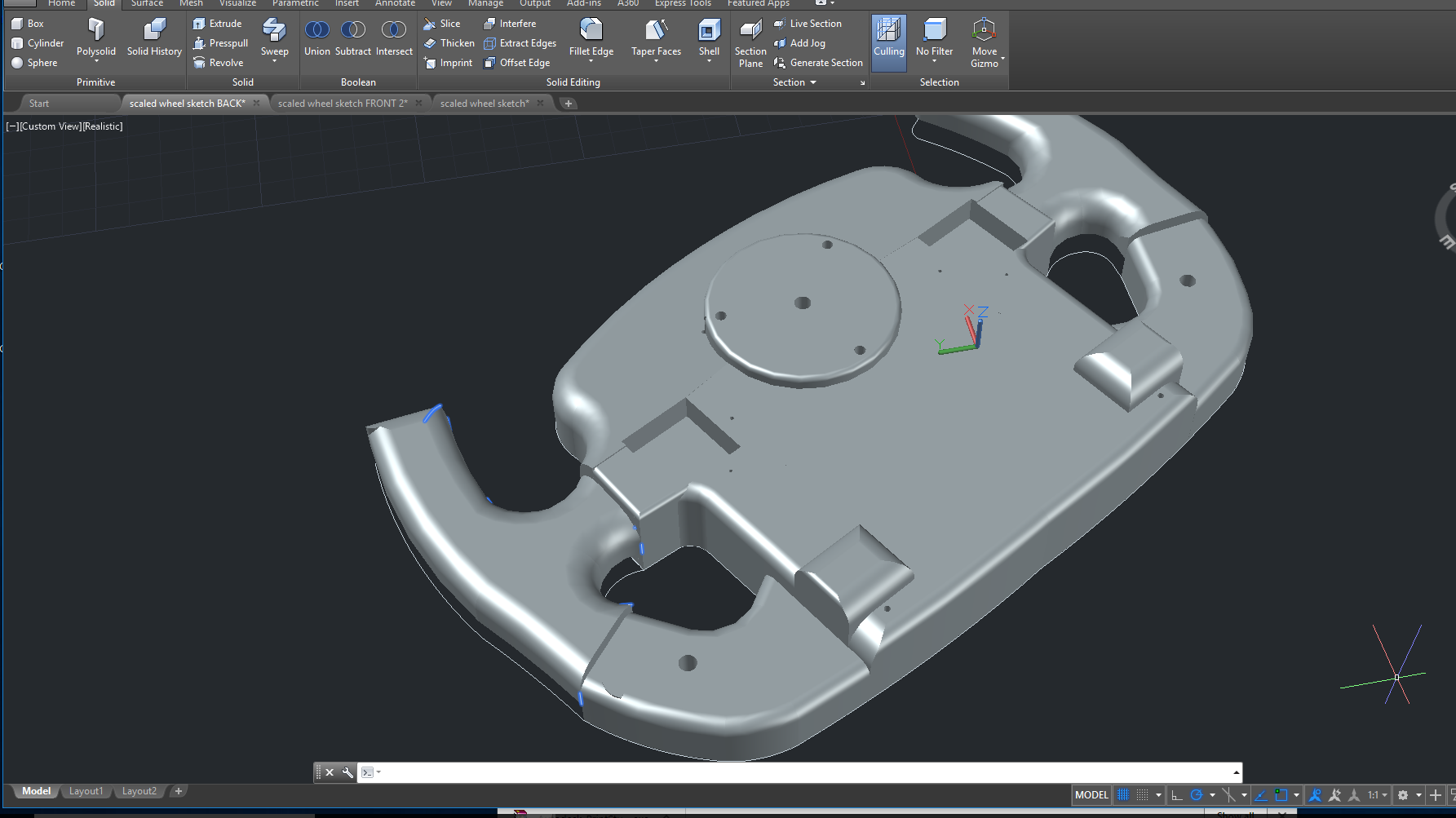