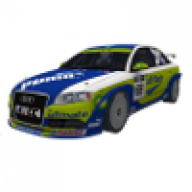 It's bad enough that I'm up til 4Am on Friday Night/Saturday Morning. Now Mini's in the middle of the week!!!!

I was disappointed to see only 7 on the server at what is arguably one of my favourite tracks (other than the crazy cutting rules that turn races into who can have the fewest S'n'G's.)

Race 1 - Nicely off the start taking Yves (which I knew wouldn't last long). Mad a couple of mistakes that let Jesse by, like i could have stopped him anyway. The rest of the race was spent tussling with Denis swapping 4th and then 3rd. Finally with a good entry to the last chicane my better top speed let me drive past Denis, holding it round Parabolica and on to finish clear in third. A first time RD podium.

Race 2 - Another good start picking up a couple of places to run 2nd behind Yves. Only for as long as the other two took to catch up. Running 4th clear of Denis this time, passing Eric and his fateful S'N'G then Jesse for the same reason a couple of laps later. Ran consistently with no off track excursions and was far enough ahead of Eric and Jesse to take 2nd and Joint second overall in the event.

The secret of Monza is care through the danger cut zones and no stop'n'go's. I managed to have only 1 cut warning in each race and no s'n'g.