I am in for Mini Friday - Sorry I can't make any other races, as my Wife is away and I am on Child duty. Being Spring in Australia that means she wakes up during the race start.

Count me in for this one!

National holiday over here, so there should be plenty of time I'm in!

#EDIT#
Did some laps, back to my default shaky Mini setup Attached in case anyone's interested - and not frightened by this (how am I going to explain that to the mechanics, anyway? "Wanted to try synchronized diving. Yep, in a car."?)

If you want to see how other RD members have designed their cars, feel free to download & install the RaceDepartment Race07 skinpack (v201439):


For more information on the pack and how to get your car added, see this topic.​

I'll be in there to somewhere?

Wasn't really sure if I was going to make the event today but things worked out and was able to get in at the start of qualify. With little to no practice didn't really have time to mess with the car setup which resulted in back of the pack start. Started off ok but realized quickly I had no top end speed. Received a stop and go 5 mins in and with trying to get comfortable with the car was running 11th at the start of pit stops. Once all was organized found my self running in 7th place all on my own for pretty much the rest of the race. Not really an enjoyable day as I usually like to try and atleast set up my gearing for the track but as always a fun time. Hopefully can get in practice, setup and be ready for next friday. Congrats to everyone for a well run race and the race winners. Till next friday

Ah, good to be in the Minis again

Got a few laps in early and was quite happy with the pace - went off and came back later to find more and more people getting faster than me! Anyways, I found a few more tenths myself and qualified 6th.

Started okay into the race, but lost a position as well as the immediate connection to the first 6 drivers. 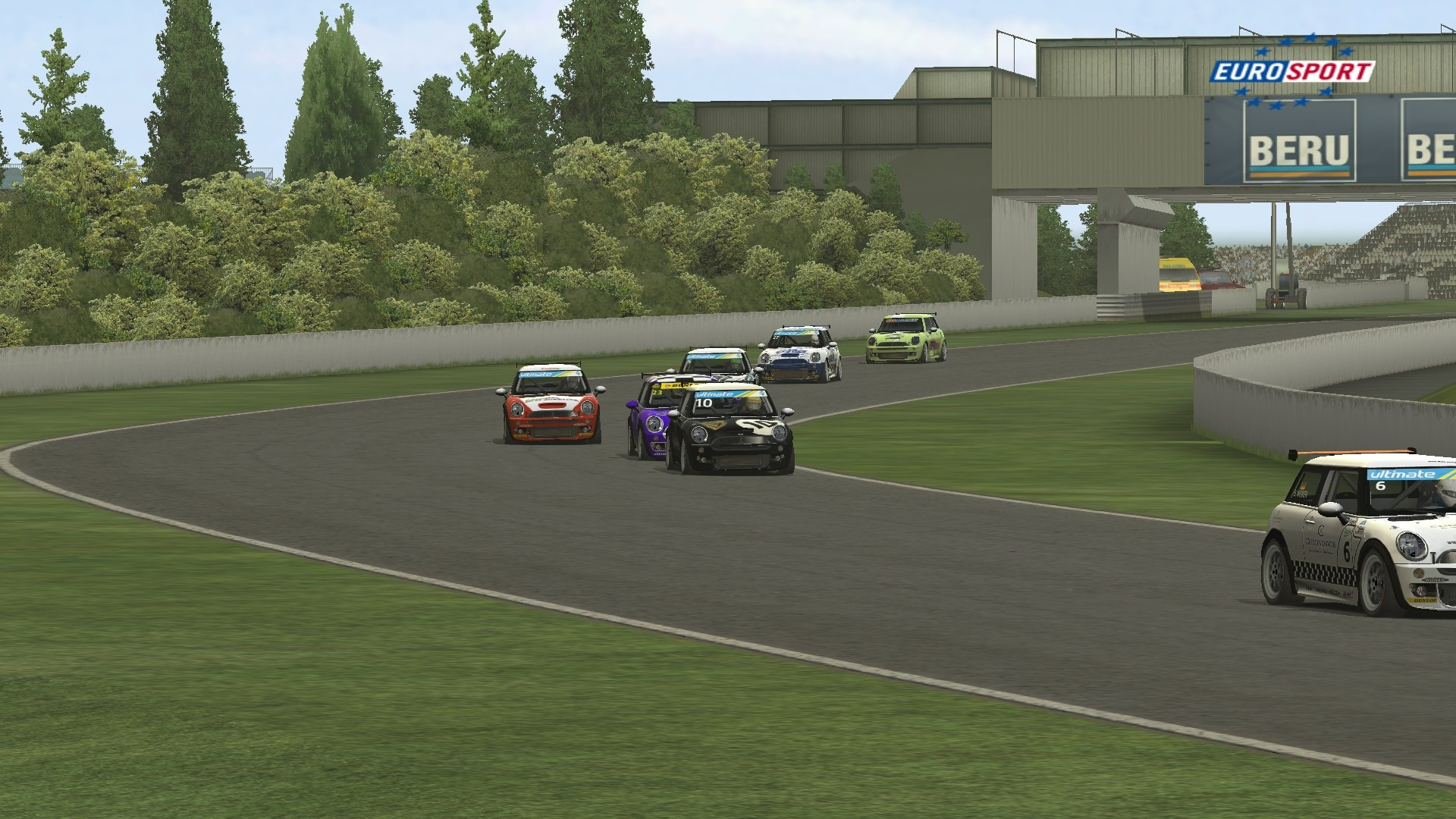 Managed to get back to Nuno's bumper in P6 and we had quite a nice fight for the next few laps - got by at some point, but couldn't quite gain any time Almost ended badly when Nuno counterpassed going into T1 two laps later, but it worked out alright. 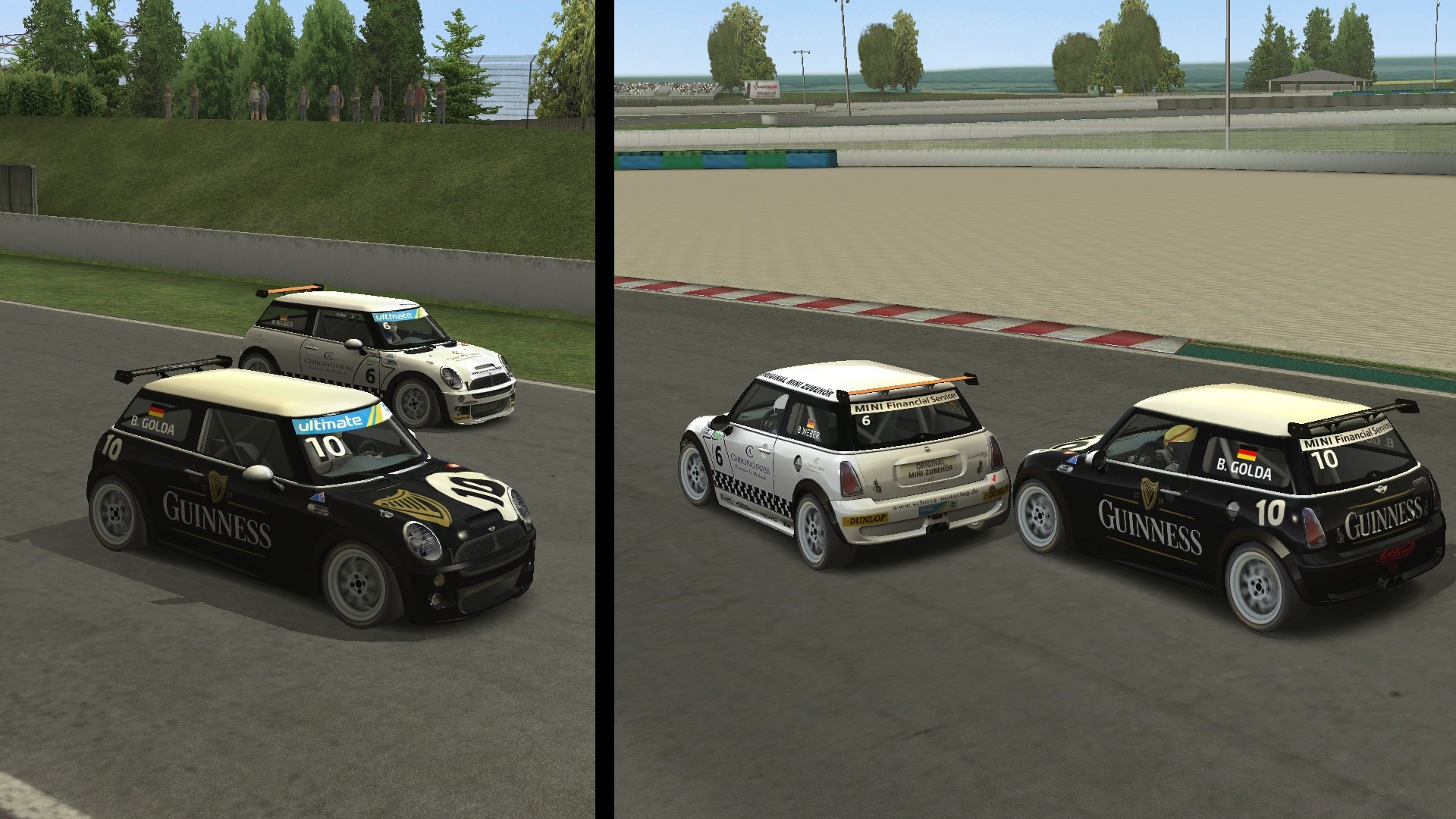 About a lap later, I lost it myself, though, when I got spinning going through the chicane. 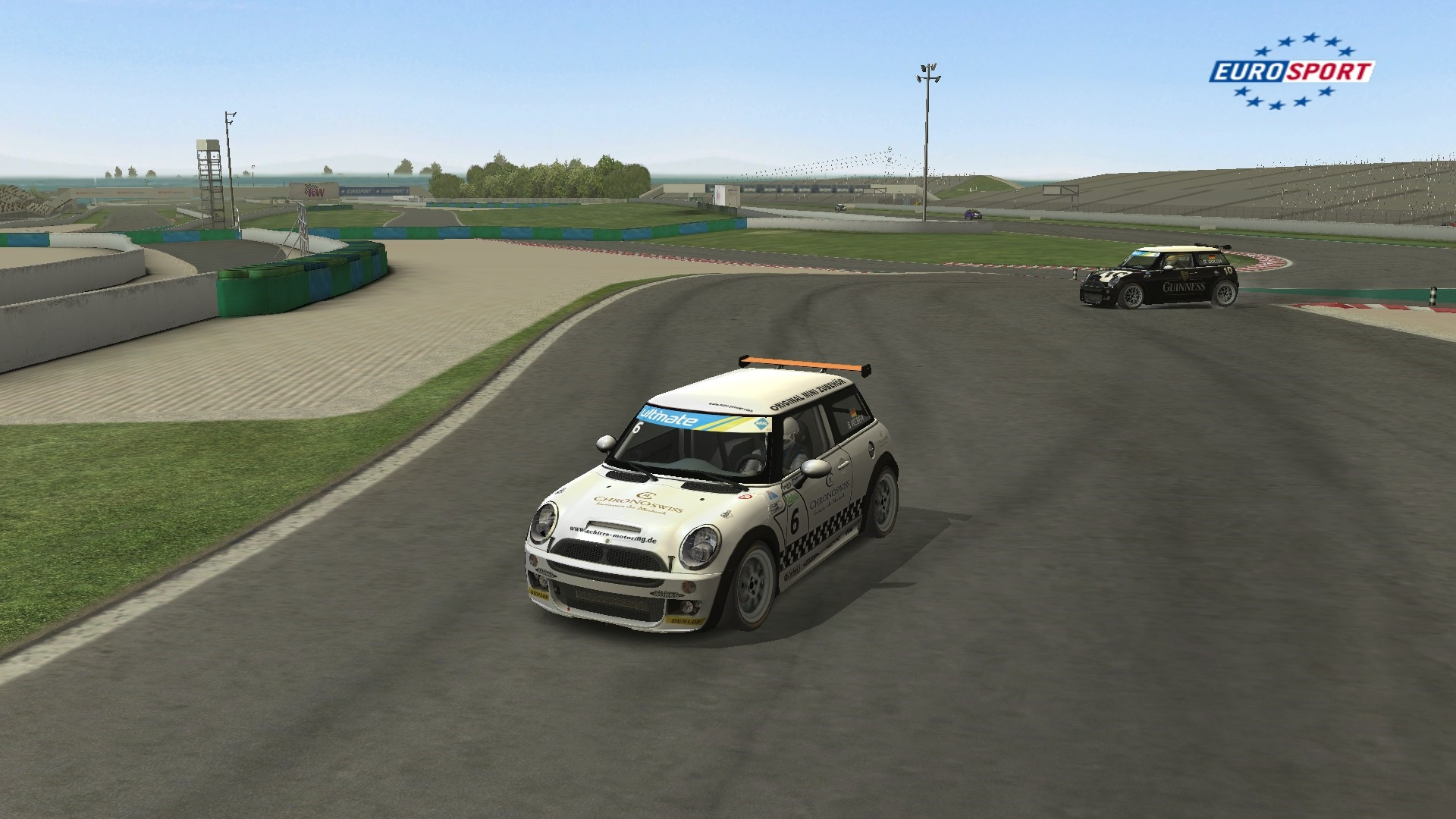 Lost a position to Henrico for a moment but counterpassed almost immediately - for a while, anyway, as I lost it at the chicane while avoiding Alex 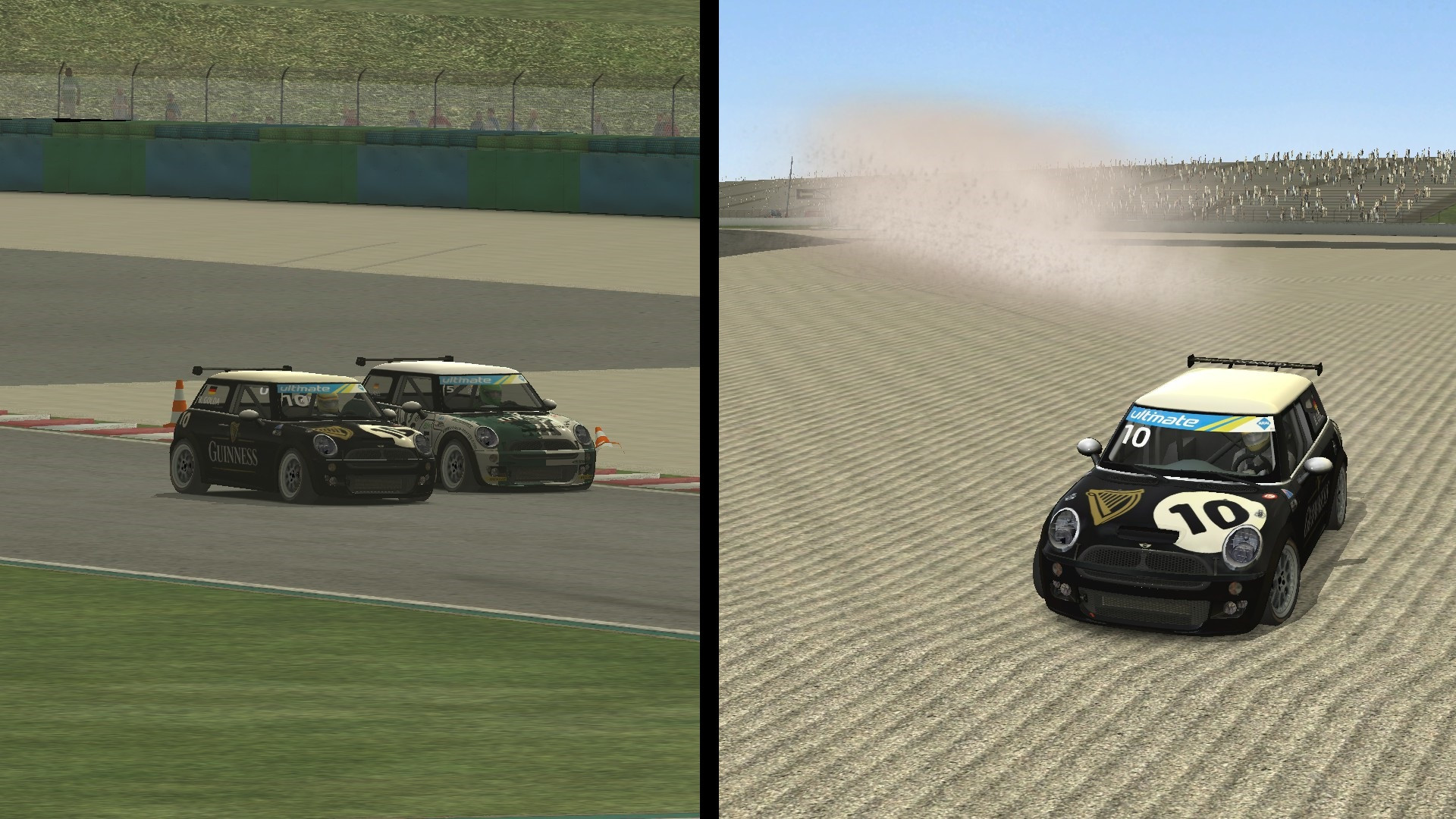 Through the pitting phase, I got that position back, though - once again, it was time to gain time on Nuno who apparently hadn't pitted perfectly and lost time in the process.
Passed him after another nice battle with him suddenly slowing down on start/finish (?) 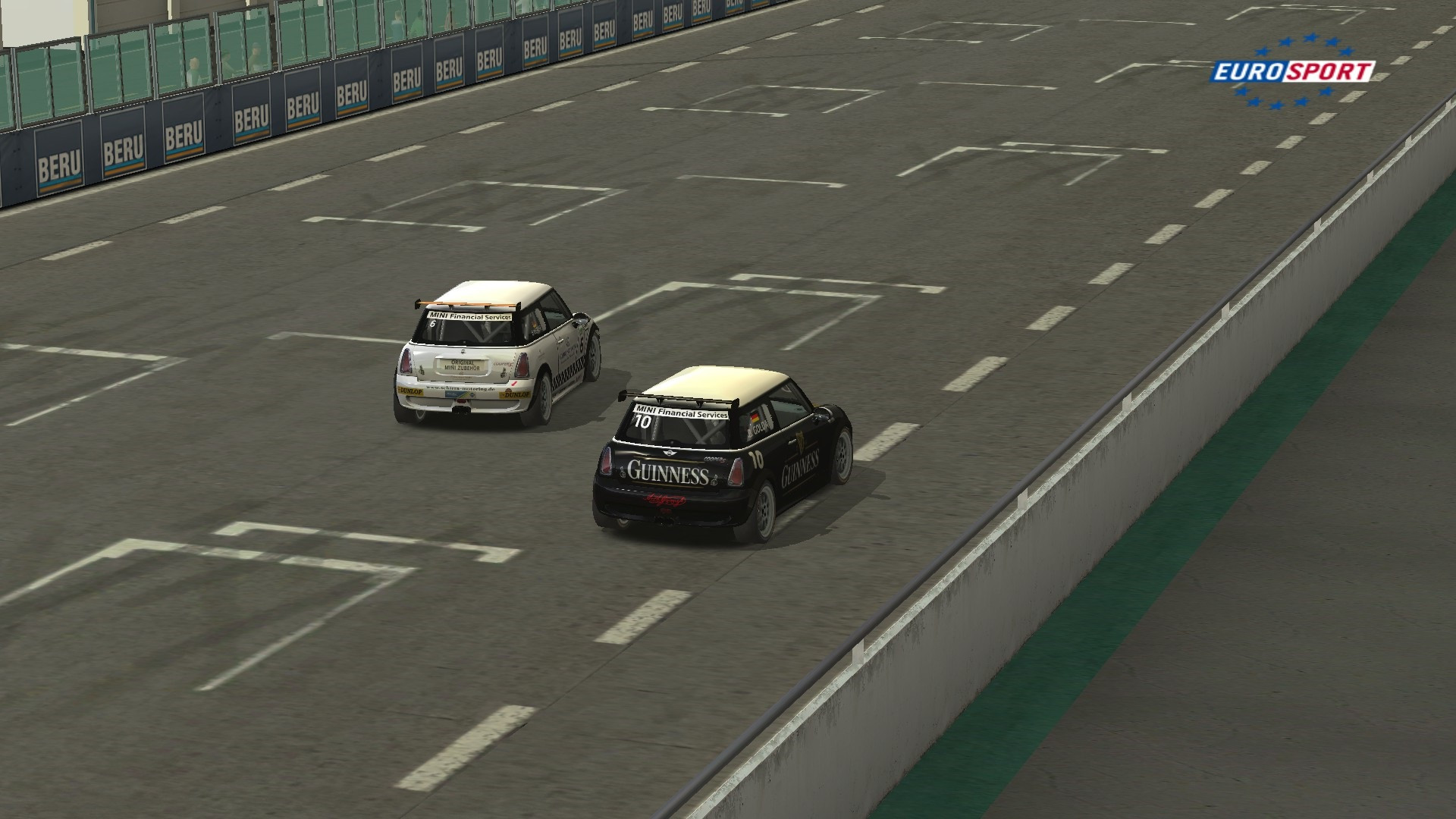 With a few DNF's earlier, that actually made for P4 after a great race

Thanks for racing, everyone, see you next week!

My garage had a car in it but covered in dust it needed a bit of care to get up and running well.

One lap with race fuel for quali and it was better than I hoped for so I sat back.

A good launch had me in a crowd and on the back straight I decided to get a bit of separation so held to the right and let all go by. In practice I had prepared two ways to attack the track and went right to the pump out laps by the numbers. That got me positioned behind David and ahead of Rob where I stayed separate from them for a while. Nelson approached and I shifted to press a bit harder in a few places to try to hold off the inevitable. A pitstop went very well and Nelson remained behind but Bjorn just went zipping into the distance ahead. A lap down I finished, only one wide T1 to my credit the entire race, I'll take that.

Nice to have a few late arrivals it made for a fun grid! Thanks all for attending and to Matthias for his victory!

My race? Well where do i begin?

I had a decent getaway from the line but T1 and T2 was the highlight of my start when i made up 2 positions on the out and inside of the turns.
I was breathing down the neck of @Arunas Linkevicius and when i passed him, a lap later i had made a mistake in the 2nd to last corner and managed to pin Arunas in the pits so i decided to enter with him and make my mandatory stop. I changed both front tyres. Somehow i managed to get a 2 second gap on Arunas and somehow jumped @Aaron Channer. After a great fight with him he unfortunately crashed at the "chicane of death" and ended what could have been an awesome fight with him. This put me in the clear. But not for long. Arunas was soon breathing down my neck and provided me with the best fight i have ever had in sim racing. Touring cars at its finest, bumping and banging. Unfortunately he received a stop and go a few laps from the end after making a desperate move at the second to last corner. I was very happy when i crossed the line with 2nd place and even somehow the fastest lap. Thanks for the awesome racing guys hope it repeats itself next week

Well, was a fun race because of Golda. Nice batle and made me sad seeing u went off. My move on T1 was not correct (bad judjment from low experience driver) and when i reallise that, i just was concerned to let space outside the track for u to pass. Sorry about that.
At the end, saw u gaining time to me and at the finish it seems fair to let u pass, as u diserve it!
You must log in or register to reply here.