Ooh. I'm in. Love this circuit. Took a win in the STCC2010 cars here earlier in the year.

There's no better way to ease my way in than with some Mini action.

I don't wanna say goodbye to this track just yet. However, I'm not sure whether I'll make it... "maybe"?

I want to try this track and take this last chance to race with RD members here, so I'll try hard to return in time for this event ..

Last chance to race with RD members? Where are you going @Arunas Linkevicius, or is it the rest of us who are going somewhere?

Yes, I was talking about this final race on this track only. I'm not very good at English so sorry
J

Signing up! My first race with you guys
J

Yes please. I like this track (and tend to go well, which helps).

Some good fun and a pretty packed grid (for this track, at least) today!

Went onto the server about 30 minutes earlier since I hadn't tried the Minis yet - with some adjustments to the Brno setup (lowered fast bump/rebound, increased steering lock) the Mini was rendered driveable and pretty fast soon after - managed to snatch pole in qualifying as Arunas re-connected while on P1.

Started fairly well and could maintain P1, though Nuno was pushing hard - couldn't gain too much on him until lap 9 (IIRC), when he went into a wall post-chicane, unfortunately. While James had a great debut, he was already a fair bit behind and, for now, no immediate danger, so I could relax a bit.
With the pitting phase approaching, Arunas was gaining quite some time and despite having started last, he easily went past when I pitted. Went out of pits with Alex in P3 in front of me, though he hadn't switched the now worn out tyres yet, so I could pass him a few kilometres down the road. James and Arunas pitted, as well, and I was back in P1.
However, Arunas was approaching with every lap and I had to concentrate on not making any big mistakes that would mean him passing me - with the clocking hitting zero mere metres before crossing the line and thus preventing another lap, it was done

Thanks for racing, everyone, see you next time!

Twas indeed entertaining. I had a pretty tough time in the race though,

In the practice i was trying to get the car to oversteer as much as i could and i got it feeling quite nice, grabbing third in quali.

Then the race came and in turn two on lap one i got 2 or 3 pretty hefty shunts that screwed my rear suspension and gave me even more off throttle oversteer. I was pretty happy with that at first but after a couple of laps i could tell it had completely unbalanced the car and i was losing a good half a second a lap as a result.
Arunas managed to catch me up and i ran deep at turn one at the wrong time, giving him the place. I tried to get him on the pitstops by only changing my front tires but i just missed out. After 5 laps or so i instantly regretted doing that as the back of my car felt like it was on ice. I was so happy that i had pulled about 35 seconds on Alex as i was a good 2-3 seconds a lap down on the laps where i wasn't slamming into the barriers.

It was very distant, passive racing that i experienced in this one but good racing regardless.

Cheers for having me

Thanks to all that showed up for today's race, most enjoyable.

My game plan was to not get torn apart by the steel barriers, both the ones on the side of the track and the mobile ones

Practice centered around driving consistency and not absolute performance. In every session I was in to day I ran very close to my fastest lap time and was very comfortable as well. I opted to Qualify with just a lap or two knowing I would be near or at the back, which was OK.

As one might imagine, that kind of strategy would make for a fairly blah race. In fact it was! I did very little slamming of the walls and never collected anyone, I don't think I ran into anyone very hard either. So, I ran as hard as I could, let those challenging me go right by and finished where my speed brought me. At this track, I'm happy with that

@Alex Odell , I looked for the tga info. Downloadable bits from the post had already been removed, I found nothing on my PC, nothing in any skinning guides except for how to make your own and nothing online. Good luck with that then, sorry.

Well, for what it's worth, here's what they/everything should be saved as. I've also added that info to the skinpack topic:

* according to bierbuden-wiki - however, the exact pixel sizes don't seem to be that rigid as we got skins in the pack(s) using 59x45 and a mod at nogrip's (whose data could actually be used a source for your skins, I guess? ) is using 59x46 as menuformat.
Last edited: Aug 1, 2014

Thanks guys. Over the weekend I'm going to put all my liveries into one easy to manage group and upload them so they can be added to the super mega skin pack, and I'll make sure my in-game flag is in there.

As for the race, it was a quiet one for me, too slow to catch those ahead, faster than those behind. Things got interesting at the pit window as I carried on whilst those ahead pitted, and was in front on the road of the leaders before I pitted. Immediately after I pitted, those same leaders were lapping me, which is a challenge on this track. Congrats to Bjorn on the win, Arunas for 2nd, and James for a 3rd on his debut with a wonky set of springs. 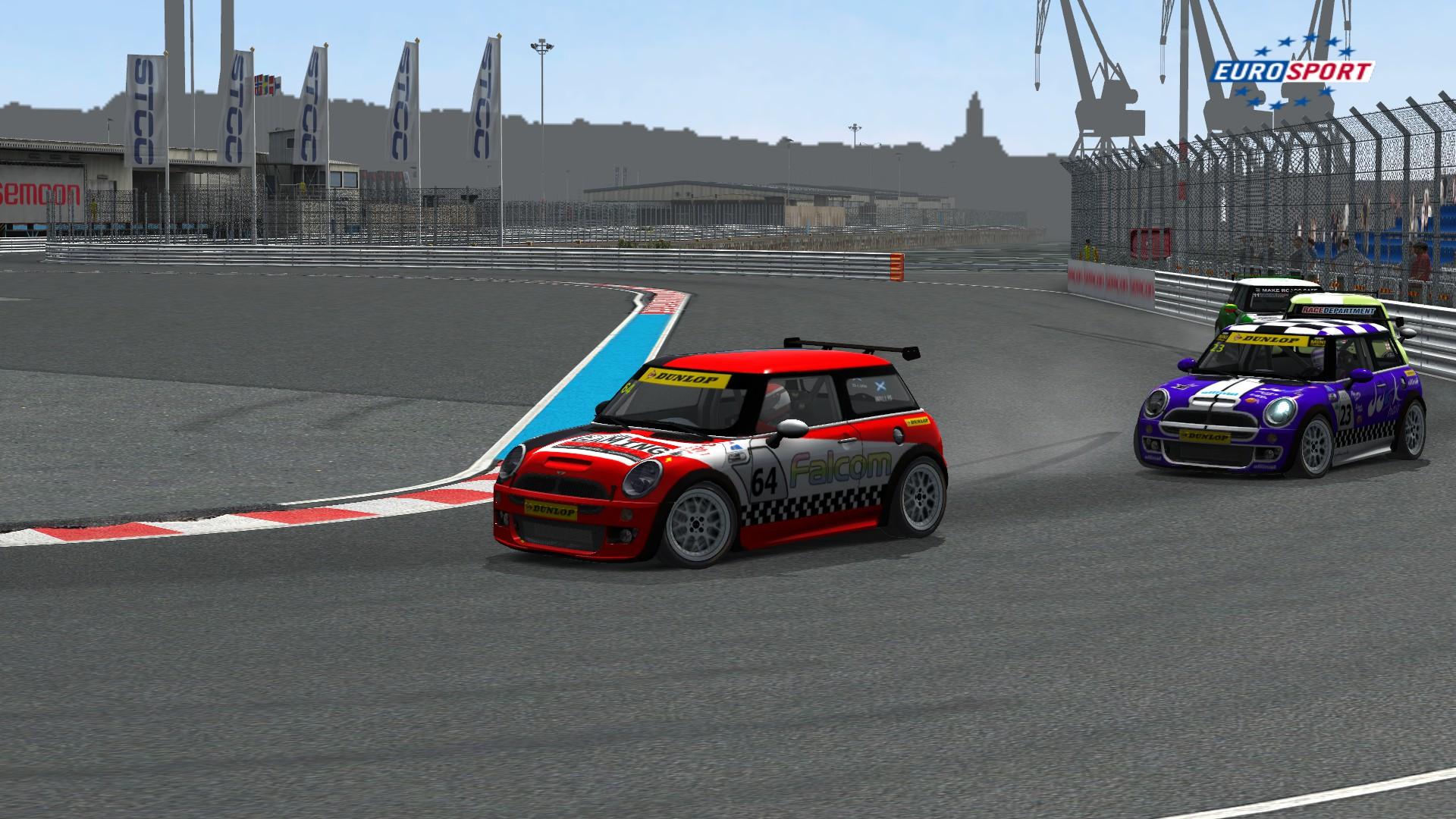 I'll get my liveries in order too. I sent my Mini livery for the skin pack but I haven't checked if it's there, but I have others for the STCC and WTCC which I'll sort out.

That was... interesting. I never really got into any kind of rhythm with the car, so I was quite surprised to wind up 5th on the grid.

In the race, I got lucky at turn 3 when @Alex Odell and @James Price-Harper connected, and I was able to jump into 4th with a string of faster cars on my tail (above). I kept faster cars behind me in the RRR race at this track, but I had a silly spin on lap 3 which dropped me back. A couple of other mistakes dropped me behind @David Kingshott and into last by about 12 seconds when I pitted. My plan was to change all 4 tyres, but I made a schoolboy error and got done for speeding in the pits, so I was a lap off the rest of the field when I finally emerged.

However, David hit trouble at the end, and I passed him when he was in the pits with a few laps to go. Having changed all 4 tyres I had enough to hold on to a somewhat undeserved 6th.
You must log in or register to reply here.