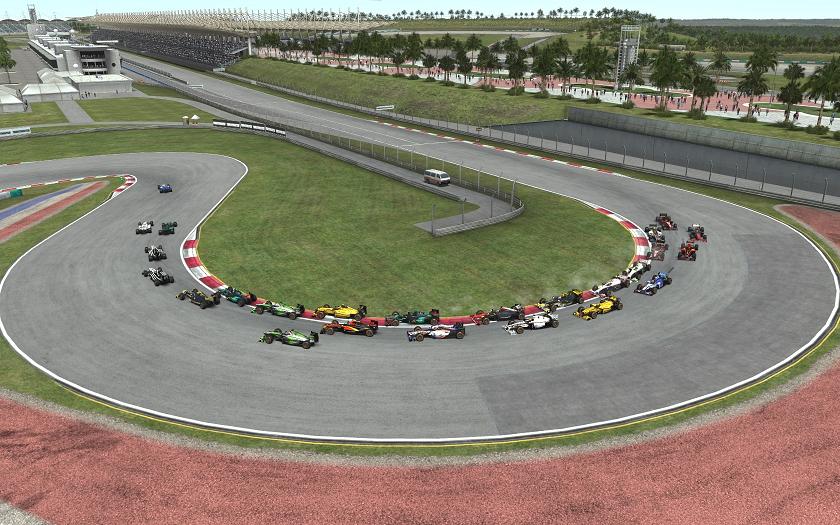 The Malaysian round of FSR Ace looked like it was going to be interesting. The new race distance meant 45 laps and that in turn meant that there were strategic options to be considered.
A three stop would be the most common but a two stop looked ok on paper if you had the discipline to manage tyres especially in the opening stint.

There was extra motivation for several drivers to look for a strategic edge as “back of grid penalties” had been applied for infractions in Melbourne to no fewer than seven drivers.
Pashalis Gergis, Martin Hodas,Teemu Valkeejarvi, Georg Winter, Chris de Jong, Giuseppe Ragusa and George Chatzipantelis had all earned the wrath of the stewards and would start from the back. Chatzipantelis if he raced would have the dubious priveledge of also serving a drive through.

The race itself got more exciting as the laps counted down.
As the various pit stop strategies unfolded four drivers had a taste of leading the race. These included eventual winner Twister Racings Daniel Kiss plus BBR Life4Racing's Fabrizio Gobbi. Another Twister Racing driver, Rens Klop, and Lovell-Eventa Simracing's Mike Partington.

Partington had the crowd on their feet in appreciation with a determined 2 stop drive that twice saw him in the lead. Sadly only a couple of laps from the end the tyres had gone, will alone was not enough and Partington's race position dropped after multiple “offs”. However this driver who had moved to Ace in 2015 after a season in Pro in 2014 had made a mark.

In First Place was Daniel Kiss the Ace and WC winner in round one, who in his second season in Ace is looking increasingly hard to beat. He was pushed by Klop early in the race but appeared to get stronger as the race developed.

Second and splitting the two Twister drivers was Fabrizio Gobbi who made a brilliant overtake with a “fakie” into turn 4 that put Klop under enough pressure to tighten a little and make a rare error.

Third was Rens Klop the reigning Pro Champion who drove a very strong race. Klop dominated Pro in 2014 and is in the hunt in Ace for 2015.

In fourth was Ruud Heesterbeek (GS Engineering) who impressed with a measured two stop drive. This guy seems to be able to manage tyres.

Fifth place was earned by Pashalis Gergis of Avid Chronic Racing - Blue Team. More impressive was that Gergis gained an incredible 13 places from P18 on the grid after a “back of grid penalty”. He ran a very disciplined 2 stop (rumours are that Martin O'Brundle may have influenced the strategy) to be .400 sec from P4.

Sixth and showing superb raw pace with the fastest lap time of the race (1m34.390 ) was Giuseppe Ragusa of BBR Life4Racing. It seems that this team has a nice set up dialed in as his team mate scored P2.

In Eigth was Guillermo Prieto-Faster Than Speed. Guillermo was impressive in the Winter series so we will possibly see more from him.

Ninth was Martin Hodás -Lovell-Eventa Simracing who impressively also came through to score from a “back of grid penalty”.


Congratulations to all finishers.