Back in the late 90s and early 2000s I spent time modifying the GP2-4 series... Mainly textures and track mods... Little did I know it would be the foundation of my career in CGI.

With COVID-19 locking us down, I eventually found myself in October with some much needed time off and, for various reasons, little to do and plenty of 'personal projects' to attack should I prefer to that over lying in bed all day...

I decided to have a play with AMS/rFactor with the intention of rebuilding the Long Beach 80s track from the 1979 mod by GPC - it's a favourite, I thought it would be cool to update the track - it also seemed like a good idea to revisit certain 'realtime' development given developments seen recently by Unreal and Unity...

The initial development was good, Patrick Depailler's onboard lap was rinsed within an inch of it's life... I got a track running quickly with improved visuals, but I quickly found myself realising AMS & rFactor, are tech no longer fully supported! Cameras and AIW's were no longer easily fixed!

A quick move to rf2 beckoned!! Additionally, as with any personal project, the requirements change radically in a very short space of time!!

A simple import/convert and some tidying of textures became a full remodelling job and so on and so forth...

The AI was a nightmare! But a fun project to 'improve' - it ain't totally finished - I can safely day that's 3 days there!!

I've borrowed elements to get things in position...

My hope is to spend some time to tweak and rebuild these placeholder elements to a unique standard.

This is a personal project - I'm hoping to share with the community in good time.

Screenshots are provided - I hope these are well received!

There's no timeframe for a release - business/work starts again soon so time becomes limited! Plus, I've foolishly started looking at race footage again - improvements must be made!!!

There are elements from GPC and ISI/S397 that need addressing/replacing - should anyone from GPC/ISI/S397 see this, please drop us a line!

All the best,
Jim K

Sort by date Sort by votes
B

sorry for the radio silence - work has taken over so little progress has been made. My March plan for chipping away fell through too!

The main issue at the moment is upgrading some of the placeholder assets and fixing a number of the walls on the track, all a bit time consuming.

I had rebuilt the Villa Riviera building from scratch, but now need to texture it!!

If I can tick off those issues, I can probably release a 'first pass'!

Bear with me!
Upvote 0 Downvote 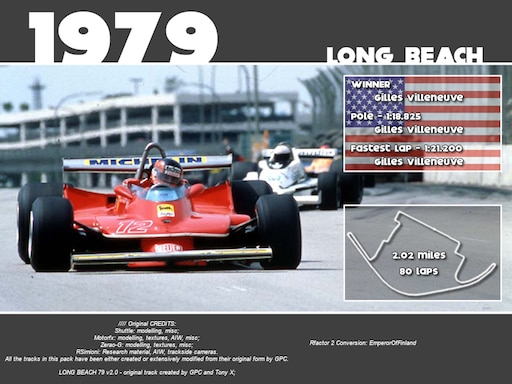 Nice I'll give a try. I hope some day some moder or S397 will make the modern version.. Love the layout and flow on this track, IMO one of the best street circuits.
Upvote 0 Downvote
E

sorry for the radio silence - work has taken over so little progress has been made. My March plan for chipping away fell through too!

The main issue at the moment is upgrading some of the placeholder assets and fixing a number of the walls on the track, all a bit time consuming.

I had rebuilt the Villa Riviera building from scratch, but now need to texture it!!

If I can tick off those issues, I can probably release a 'first pass'!

I've been following your project with interest as the original Long Beach layout has always been one of my favourites.

I created an updated version of the GPC track a couple of years ago for my own use. I wanted to have a 1976/77 version of the track, with the start/finish on Ocean Boulevard, so I re-positioned the timing objects and re-did the AIW, complete with blocking paths and it seems to work well with the March, McLaren and Brabham cars from that era.

I watched some videos of the 76 and 77 races and tried to capture the look and feel of those years by adding some buildings and grandstands and, although not historically accurate for the time, I added an amusement park to the pike area since that it what was originally in that area. It also adds a touch of animation, with a ferris wheel that I took from the NOLA track.

I did some work on the road surface in 3ds Max and set up the real road, which seems to work OK. I also added the animated flagmen and a few other bits and pieces, like freeway signs and a blimp. I also found a free model of the Villa Riviera building somewhere on the internet (don't remember where) and added that to the scene near the first hairpin.

I've done a lot of conversions of tracks into rfactor 2 and assetto corsa for my own use. I'm not very skilled so most of them are very basic, but functional enough for my purposes. This Long Beach track is the one that I've put the most work into so perhaps it is a bit better than my usual standard and others may be interested in it.

If you are interested in it, I'd be pleased to make it available to you for you to do whatever you want with it. Perhaps it will help you with your project in some way. If you have the necessary permissions, then feel free to release it to the community as is or as a modified version as part of your project, whatever you see fit. I won't be doing any further work on it, so I'm happy for others to take over and share if they think it's a worthwhile base.

Regards,
Steve
Upvote 0 Downvote
You must log in or register to reply here.