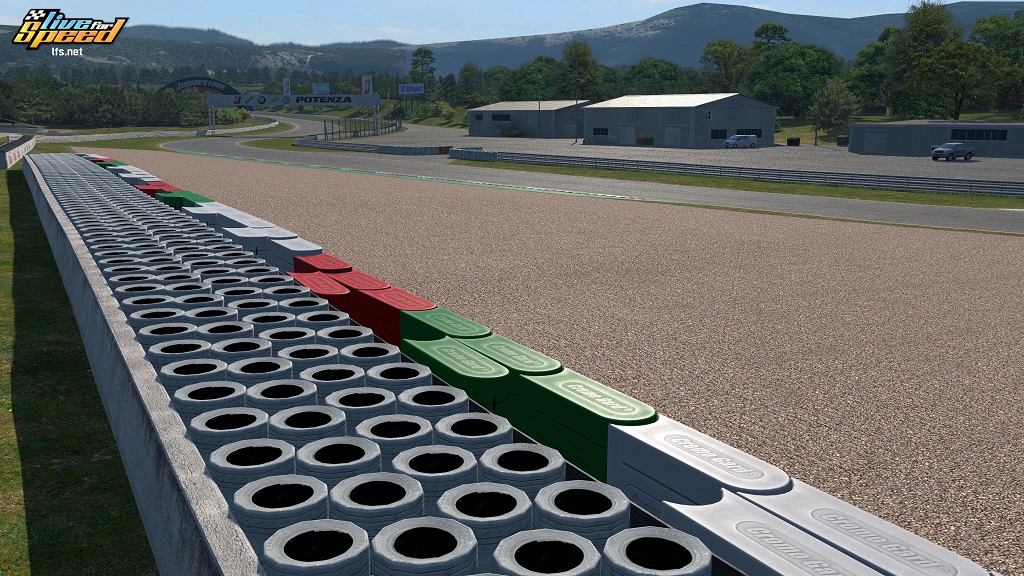 As many of you are aware, Live for Speed is going through something of a refresh at the moment with new lighting and improved graphics - the latest of which can be seen below.

Having been in the wild now for longer than any other active racing simulation, Live for Speed continues to receive plenty of care and attention from the development team. With a wave of new visual updates having been teased over the past few months, this classic racing title continues to make strides towards maintaining a modern vibe in light of a raft of new and impressive racing simulations having hit the genre since build one released all the way back in 2003.

The title might be getting a bit long in the tooth now, but that hasn't deterred the development team from continuing to pour time and energy into the software, and I'm sure you will agree the recent progress made with the game certainly looks impressive...

The Kyoto track is not yet finished. There is still more detail to be completed and holes to fill, but we thought you would like to see how it is coming along. 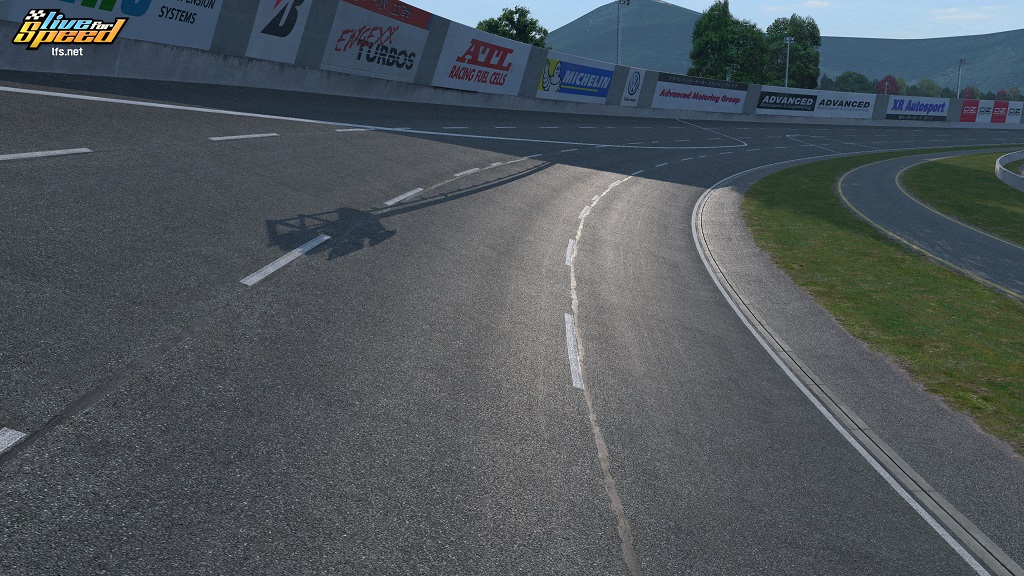 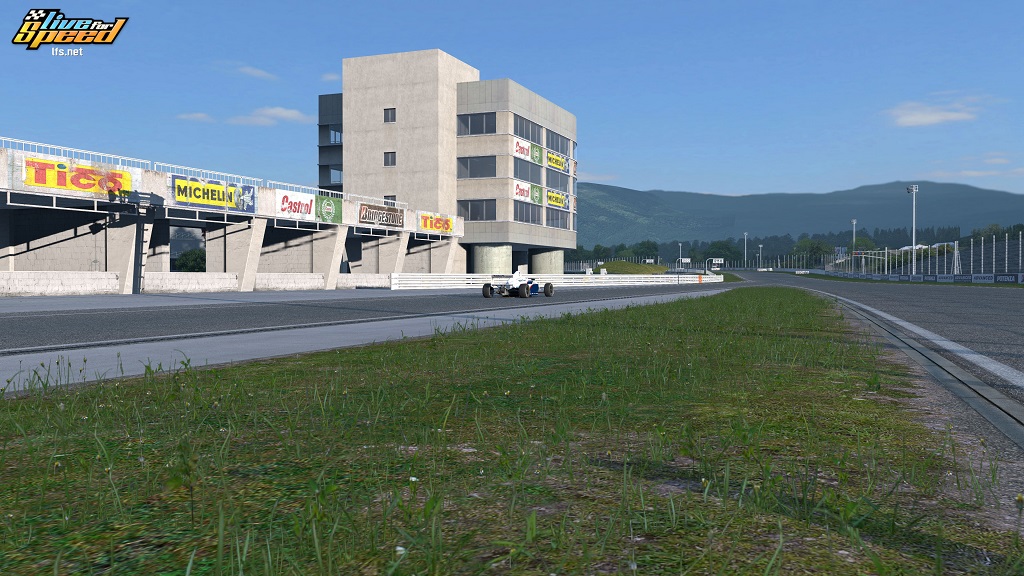 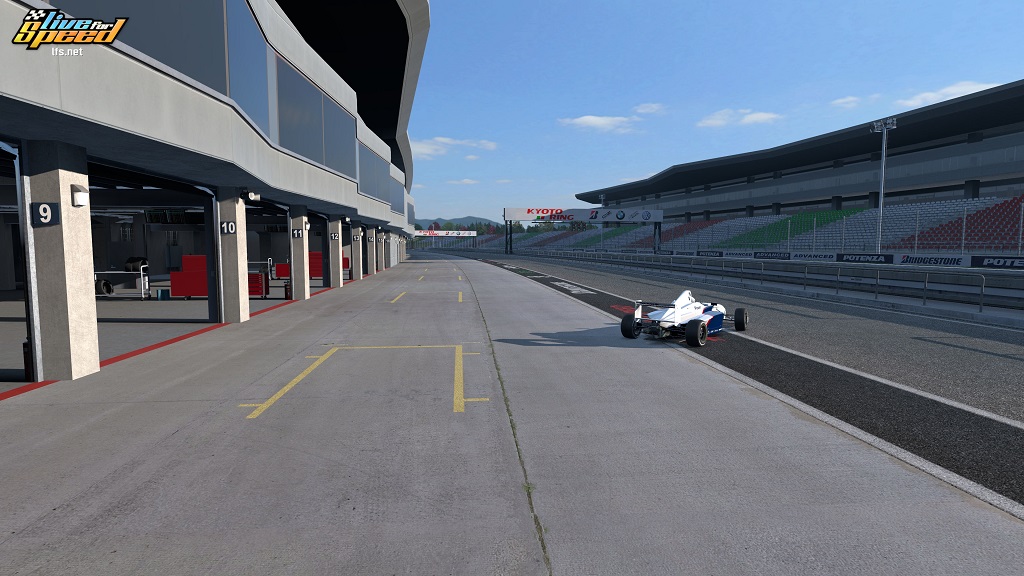 Because of the way the new shadow system works, there is no longer a need for a limited number of lighting setups per track. I tried an experiment to allow the user to set the time of day for the lighting. The sun direction is calculated from that and the geographical location of the track. It became very tempting to try to allow all times of day and night. If that was to happen we would need working headlights, so I had a go at that as you can see in these screenshots. 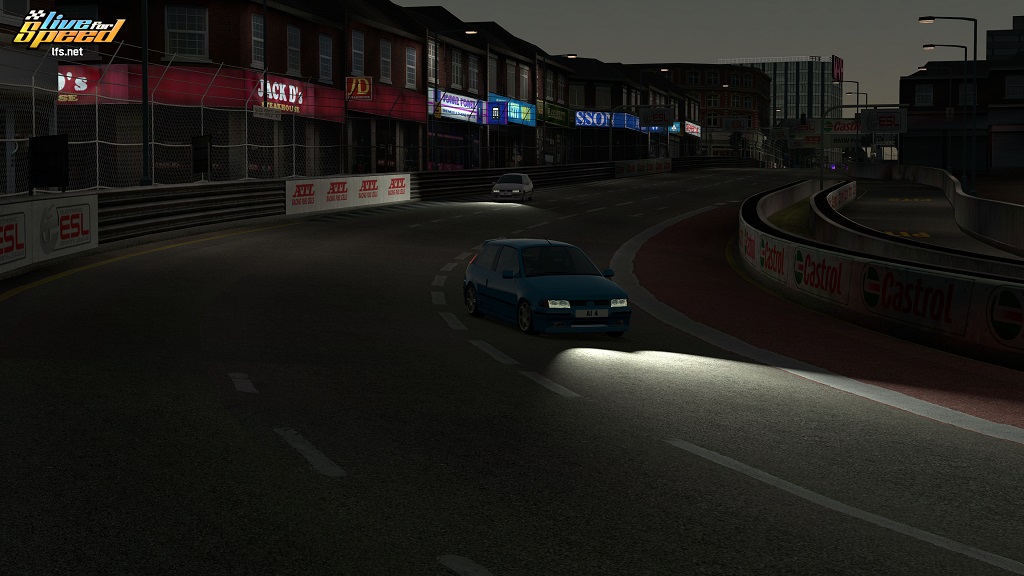 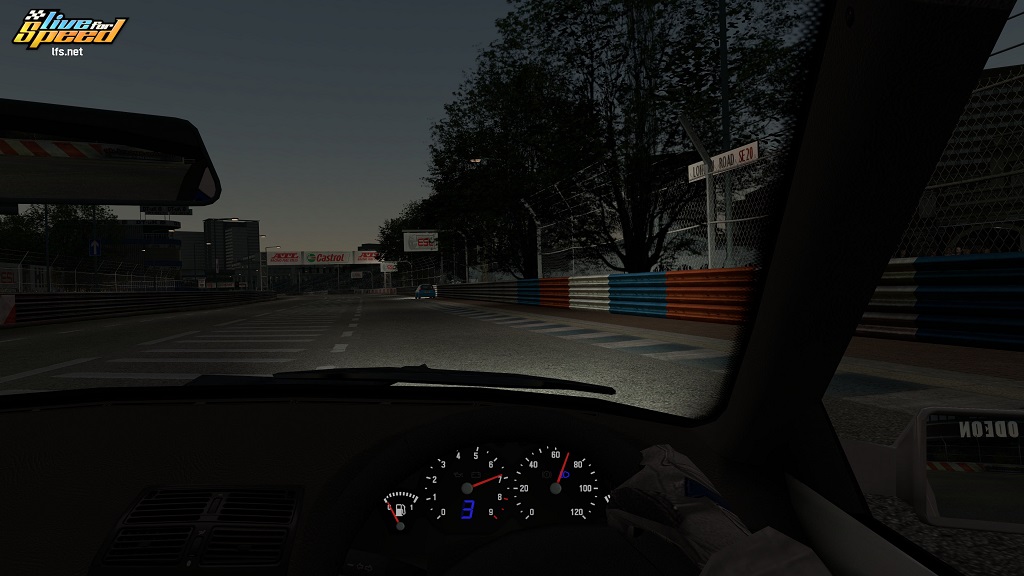 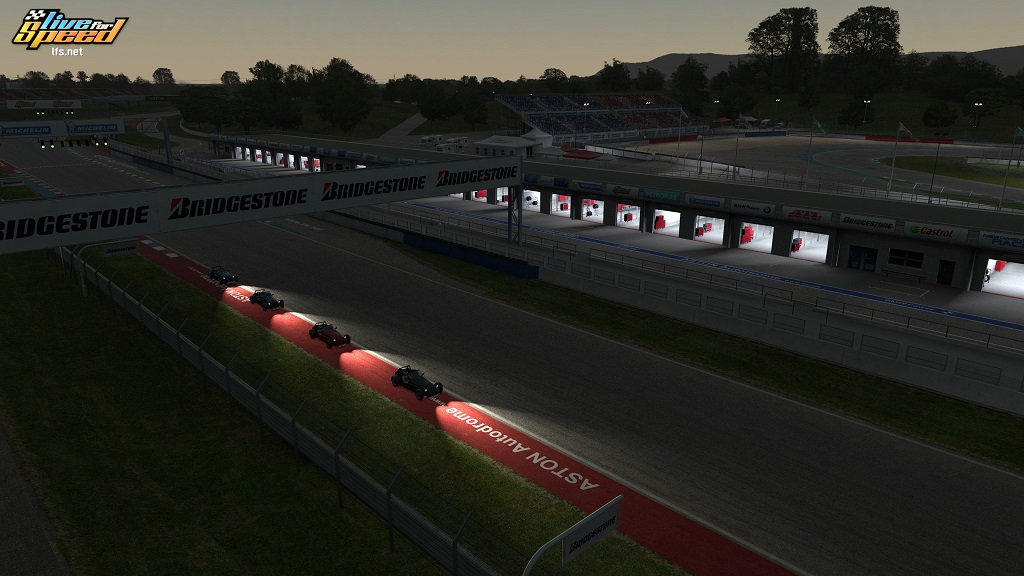 We now have a simple interface to control time. You can select live time, so the tracks are lit according to their geographical position at the current time. Another option allows the time in game to be offset relative to real time by a number of hours (and days). For example you can start your race in the daytime even if it is really evening. Finally there is still an option for fixed time, which is useful at least for development purposes.

Here is a video of a sunset at the Autocross area :

I've recently been experimenting with real time generated skies to provide a lot of variation for the different sun positions. It's an interesting subject but it brings up the issue of exposure that is encountered with cameras (and eyes) in real life. An iris control can adjust the exposure.

All very interesting stuff, and it just goes to show, just because a sim has been around for a while, doesn't mean it still can't be a player in the modern sim racing landscape.


Live for Speed is available for PC now.

Check out the Live for Speed sub forum here at RaceDepartment for the latest news and discussion regarding the old but still very much gold racing simulation.

Such a waste all this effort is going to be, due to many people already owning this sim decades ago, they should repackage it, and release a brand new title with all these added features and visual updates, rather than bolting new features all onto the the old, seems like they are doing the exact same studio 397 are doing with rFactor 2, yet no returns in new players and no new funds coming in.

Re- release it on steam as a new racing sim title, open it up to modding, add the new features get maximum returns funds and new players.
Last edited: May 1, 2019
Upvote 0 Downvote

Question to those who know about software development. Could this title realistically ever get on par with the like of rf2?
Upvote 0 Downvote

The pace of LFS dev was always glacially slow. Scavier always liked doing things in their own way at their own pace, and when we had very little sim-racing around, LFS was just bloody perfect for physics and multiplayer racing.

What always let it down were the graphics and sound, which were absolutely terrible.

Other sims popped up and matured. Sequels to those sims turned up. Whole generations of PC hardware came and went, and yet still LFS did it's own thing in it's own time. The whole time, we all suggested "get some new guys in the team" "accept some quality community content" "release it on steam", etc, but to no avail.

I did run multiplayer servers way back in the day of LFS and got a huge amount of enjoyment out of it, but everything else appeared, improved, advanced up to the point we're at now, and I moved on a long time ago. No amount of (finally) adding dynamic lighting, track rebuilds, whatever is going to make me go back to a now ancient sim. It's just all far too little, far too late. LFS will still be basically where it is now in 10 years time, when we're onto the 4th gen of AC/rF, etc.

I'd still love to see Scawen and the boys get somewhere in current times, but I just think they vastly missed the boat, and never even attempted to board it when it was in port.
Upvote 0 Downvote

LFS has better physics than plenty of modern-day sims so I'm thankful that development has continued.
Upvote 0 Downvote

I've got to try this one out. Totally willing to fork over a little, too, as reward for their admirable commitment.

Can't say I disagree with those who think they should reboot under a new name and attract more attention to themselves.

That said, maybe they're happy doing it this way? Maybe it's a passion project and they just want to do their own thing. There's a place for that, too, and I can totally respect that.

To thine own self be true, as has been said.
Upvote 0 Downvote

Thank you for this news, looking forward to try the new features and eventually drive on the Kyoto track.
They still have the best “real” mirrors all the all industry in VR.
Upvote 0 Downvote
G

They keep adding sporadically some new features to their baby probably for fun, since it is not monetized anymore...
Upvote 0 Downvote
M

I'd like to see a serious review of the physics vs. rF2/AMS, ACC/AC, or others. It was advanced in 2003, but how does it compare today? If it holds up, then I agree with the posts above about repackaging it. If not, then "ignore" and let the devs do whatever they want with their passion project. I don't mean literally ignore, but no point in getting exorcised about anything because the devs have always sung to their own tune.
Upvote 0 Downvote

melanieuk said:
Such a waste all this effort is going to be, due to many people already owning this sim decades ago, they should repackage it, and release a brand new title with all these added features and visual updates, rather than bolting new features all onto the the old, seems like they are doing the exact same studio 397 are doing with rFactor 2, yet no returns in new players and no new funds coming in.

Re- release it on steam as a new racing sim title, open it up to modding, add the new features get maximum returns funds and new players.
Click to expand...

And I can fire up live for speed at any point and race real players...something that I have yet to do with rfactor2 after all these years of owning.

Live for speed has been up and running this whole time with constant stream of players....something rf2 will never have.
Upvote 0 Downvote

Imo still the best intuitive sim for pickup racing, the interface is clear and simple, and the netcode is simply the best compared to other simracing.

Without forgetting the Insim interface.

I think after this update and with the current free demo formula, with little more visibility (steam or epic store availability), it can cater more people than RF2 and automobilista combined.
Upvote 0 Downvote

I always think this is an arcade type game with the title for some reason
Like others have stated, needs a re brand & put on steam
Upvote 0 Downvote

early access on steam, money they get could be put into updating all the content to the new quality, and maybe using some of the money onto car licenses, so taht they can introduce some real manufacturers

or get someone to redesign the cars, so that they look bit better / more realistic
Upvote 0 Downvote
D

melanieuk said:
Such a waste all this effort is going to be, due to many people already owning this sim decades ago, they should repackage it, and release a brand new title with all these added features and visual updates, rather than bolting new features all onto the the old, seems like they are doing the exact same studio 397 are doing with rFactor 2, yet no returns in new players and no new funds coming in.

Re- release it on steam as a new racing sim title, open it up to modding, add the new features get maximum returns funds and new players.
Click to expand...

i disagree with everything you said except making it get to steam. If R3's purchase model and i racing made it to steam with no issues LFS could too, as the main game being a demo and the "passes licenses" being DLC.

But i dont think its a bad thing that they work on the game even to this day.
Upvote 0 Downvote
P

It amaze me how much they can get out of DX9! LFS has many nice things going for it. Netcode rocks! However, the sound was also the thing that put be off LFS. While technically correct, cars sounds like bee mobiles...
Upvote 0 Downvote

I remember this game from my childhood.