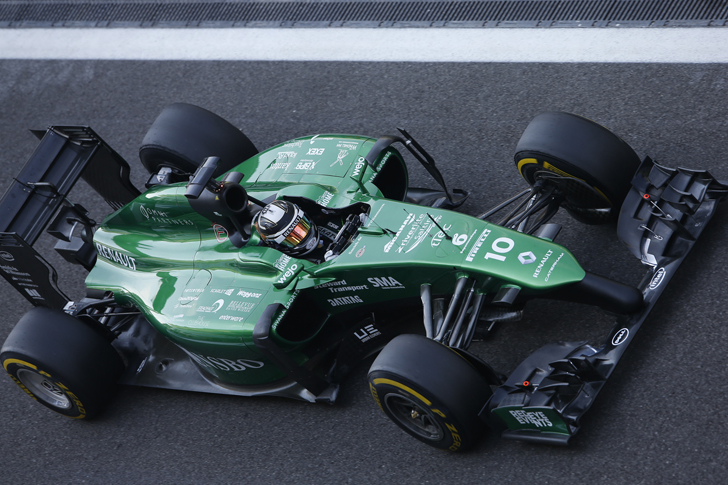 Last week, there was a buzz around Japan's top-level single-seater series that hadn't been seen in a long time if ever, and the former Toyota, Sauber, and Caterham driver (seen above, driving for Caterham F1 Team in the Abu Dhabi Grand Prix) made good on the hype by setting the fastest times in both days of testing at Okayama.

Driving for Toyota Team LeMans, carrying the familiar blue and gold colors of title sponsor Sunoco, Kobayashi topped the timesheets in Wednesday's test session with a fastest lap time of 1:11.769s around the 3.7 kilometer circuit, and former home of Formula One's Pacific Grand Prix in 1994 and 1995. As a point of reference, Kobayashi's fastest time in day one was over two seconds faster than the fastest race lap set in a Formula One car back in 1994 by Michael Schumacher, and only 1.5s slower than Ayrton Senna's pole lap in the same Pacific GP meeting. Kobayashi also managed to set the fastest time on a drying track on Thursday, setting a time of 1:15.151s to conclude a session that was marred by wet conditions and five red flag stoppages earlier in the morning.

Kobayashi's high-risk gamble to leave a competitive ride at AF Corse in the GTE Pro class of the World Endurance Championship, where he raced in 2013 after three seasons at Sauber, to return to Formula One with perennial backmarkers Caterham this past season ultimately came up snake eyes. The Japanese driver ended the 2014 season without scoring a point in 16 races, missing the United States and Brazilian Grands Prix as Caterham were placed in administration, and being asked to stand down for the Belgian Grand Prix as Caterham brought in three-time Le Mans winner and 2011 Super Formula champion Andre Lotterer. He was 22nd in the 2014 championship standings, with a best finish of 13th at Malaysia and Monaco.

A veteran of 76 F1 Grands Prix with one career podium finish at the 2012 Japanese Grand Prix (3rd), Kobayashi was a Toyota-aligned driver throughout his pre-Formula One career in Formula Renault 2.0, Formula 3 Euro Series, and GP2 Series competition, but he has not driven for Toyota since they withdrew from the sport in 2009, and he has not competed in a Japanese series since his first year of car racing in 2003 (Formula Toyota). Although the 28-year-old Japanese has not committed to any series or team for 2015, the potential of a move to Super Formula should, in theory, bring many of Kobayashi's fans to Super Formula, especially if his brief foray in sports cars and the subsequent popularity boost that came with it serves as a precedent.

Kobayashi's strong showing in testing was not too much of a surprise, but the surprise appearance and strong showing by 2011 Nissan GT Academy winner and current GP3 Series and Le Mans driver Jann Mardenborough certainly was. 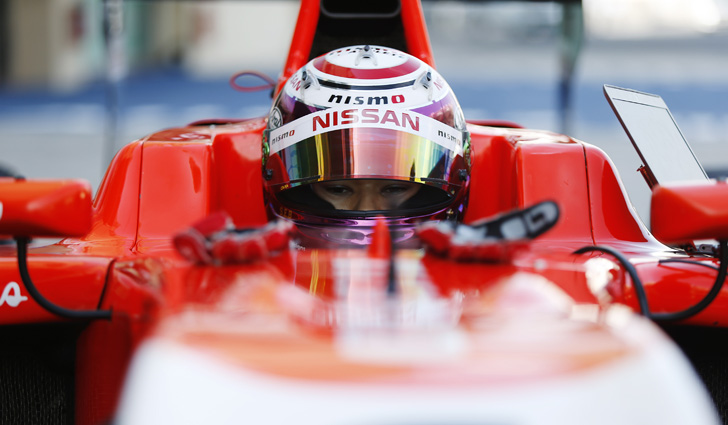 Mardenborough (above, driving for Arden International in GP3 Series compeition) turned up at the Okayama tests as a virtually unannounced wild card for Lenovo Team Impul, and finished second behind only Kobayashi on Wednesday, and third overall in the rain-soaked Thursday session. On both days, he beat a field of drivers that included accomplished stars such IndyCar Series star and former F1 driver Takuma Sato, former Formula Renault 3.5 Series and WEC LMP2 champion Bertrand Baguette, reigning Super GT co-champion Tsugio Matsuda, and on Wednesday he was even faster than two-time and defending Super Formula champion Kazuki Nakajima.

The Brit's impressive first test run in the Dallara SF14 comes off the back of a November test for Tech 1 Racing in Formula Renault 3.5 at Jerez, and follows a much-improved second season competing in single seaters. He was vice-champion in New Zealand's Toyota Racing Series, and in his rookie year in GP3 he finished 9th in the championship, ahead of both Arden International teammates Patric Niederhauser and Robert Visoiu - winning the sprint race at the Hockenheimring from reverse grid pole position, adding another podium finish at the Hungaroring sprint race, and ending the season with 77 points and 9 points finishes.

Team Impul uses Toyota engines in Super Formula, but team principal Kazuyoshi Hoshino, who was reportedly very impressed with Mardenborough's driving during the tests, and his Impul team have had a successful and storied association with Nissan - along with their long-serving sponsors Calsonic, whose livery continues to adorn their Nissan GT-R in the Autobacs Super GT Series. Mardenborough, who has had very strong showings in his two Le Mans 24 Hour entries in the LMP2 class, has long been speculated as a candidate to race for Nissan's LMP1 team beginning in the 2015 World Endurance Championship season.

Super Formula has only one clash with the WEC calendar in 2015 - the season-opening races of both series are held on April 12th - and now that the 23-year-old native of Darlington has established that he has the pace to compete with many of the best drivers in the series, a step up from GP3 into Super Formula may prove to be the a necessary and well-earned promotion up the single seater ladder, while also allowing him to potentially represent Nissan for most of the WEC season including Le Mans in addition.

Mardenborough was not the only European standout to test in Okayama last week. 2013 GP2 Series champion Fabio Leimer participated in the test, after it was announced on November 27th that the 25-year-old Swiss driver would be running for Honda-powered Team Mugen. He was an impressive 4th overall in the Wednesday test, but was relegated to 9th overall in a difficult Thursday session for the team. After becoming the third GP2 Series champion in six seasons to be refused promotion to Formula One upon winning the title, Leimer joined LMP1 privateers Rebellion Racing for the full 2014 World Endurance Championship season, co-driving the Oreca-constructed R-One prototype to overall top 10 finishes in the last four consecutive races.

The 2015 Super Formula championship begins on April 12th with the opening round held at the legendary Suzuka Circuit.

Very informative on a field of racing I'm not that much in touch with. Thanks alot and keep up your good work!
*I like*
T

Which RD Member wrote about Mardenborough this season
http://www.racedepartment.com/threads/gamer-becomes-racer.90540/#post-1776113

His career is taking a nice flight now. Good luck to him

Especially when you consider that Mardenborough never had much experience in karting and was trained for touring & sports cars in GT Academy, and it is just year two of his single-seater experience in an era where quick progression through the ladder and age (or lack thereof) are so heavily valued.

As a follow-up: The Super Formula calendar has been altered this week. The Suzuka season opener was pushed back one week to April 19th, avoiding a clash with the WEC 6 Hours of Silverstone, and the race at Sportsland SUGO has been moved to October to avoid a clash with the Japanese Grand Prix.
You must log in or register to reply here.