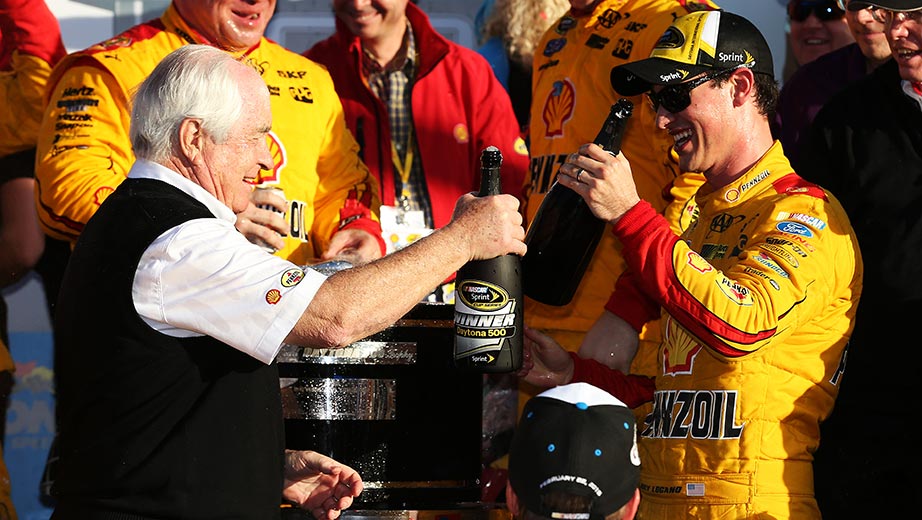 The stage was set with high drama for the race winner, as within the last fifty laps of the race, Logano's Penske Racing teammate Brad Keselowski, and the Penske-engined Wood Brothers Racing Ford of rookie Ryan Blaney both suffered terminal engine failures, and with twenty laps to go his team became concerned over the potential of his own Penske Ford engine letting go, along with a potential battery voltage problem. In the closing laps, Logano was thrown between being caught in a three-wide battle for the lead, or having to drive out of his rear-view mirror to halt the momentum of the surging pack behind him. With three laps to go, Justin Allgaier blew a tyre on the frontstretch and spun, triggering a seven-minute red flag that would set up a green-white-chequered finish - a common trend at Daytona, that has now been necessitated in seven of the last eleven Daytona 500s since it was first implemented in 2005.

A multi-car accident on the final lap of the race was triggered on the backstretch behind the leaders, and NASCAR's decision to throw a caution flag and freeze the field as they headed to the chequered flag allowed Logano to hold off defending Sprint Cup Series champion Kevin Harvick, with whom Logano had a tense altercation following last Saturday's Sprint Unlimited exhibition race, and defending Daytona 500 winner Dale Earnhardt Jr. (39 laps led) for his first Daytona 500 victory. Logano led 31 laps today en route to the victory; in six previous starts at the Daytona 500, Logano had led only seven laps, and had not finished better than ninth place. He becomes the second youngest-winner of the Daytona 500, beaten only by Trevor Bayne, the underdog 2011 winner who finished 30th in this year's race.

It's the second victory at the Great American Race for team owner Roger Penske, who first saw one of his cars win in 2008 with Ryan Newman.

Rounding out the top five were last year's runner-up Denny Hamlin, and two-time winner Jimmie Johnson, who rebounded from a pit-lane infraction for having his crew over the wall too soon and led 39 laps before ultimately finishing 5th. Casey Mears of the single-car Germain Racing team completed a strong run to 6th overall. Clint Bowyer, Martin Truex, Jr., Kasey Kahne, and Greg Biffle completed the top ten.

In his twenty-third and final start in the Daytona 500, Jeff Gordon was ultimately a casualty of the last-lap shunt, after taking pole position and leading 87 of 200 laps, he will ultimately be classified 33rd. Gordon's unrewarded efforts continue two historical trends that may have doomed the four-time NASCAR champion: the leader at halfway hadn't won the last twenty-two Daytona 500s, and the polesitter of the Daytona 500 had gone winless in the last fifteen consecutive outings.

Gordon was not alone in disappointment at Daytona, as Tony Stewart's own hopes of finally hoisting the Harley J. Earl Trophy in his seventeenth Daytona 500 effectively ended on Lap 41 as the three-time Cup Series champion suffered terminal suspension damage in a crash that also involved Blaney, and Sprint Unlimited winner Matt Kenseth who ultimately placed 35th. Stewart retired from the race on Lap 140 after spending several laps in the garage for repairs, and will be classified 42nd.

Less than seventy-two hours ago, lower-rung standouts Regan Smith and Matt Crafton weren't even meant to start the 57th Annual Daytona 500, but extenuating circumstances led to both drivers recording Top 10 finishes. Xfinity Series front-runner Smith, replacing the suspended Kurt Busch, finished 16th in the #41 HAAS Chevrolet, while Crafton, replacing Kyle Busch who suffered a fractured right leg and left foot in a savage head-on crash during Saturday's NASCAR Xfinity Series race - and may miss the entire 2015 season as a result , finished 19th in his very first Sprint Cup Series start after fifteen years competing primarily in the third-tier Truck Series, of which Crafton is the two-time and defending champion.

With Logano's victory, he guarantees a berth in the 16-driver field in the Chase for the Sprint Cup. Logano made it all the way to the final four at Homestead-Miami Speedway last year, before ultimately losing the championship to Harvick on an error on his last pit stop.

The 36-race season continues at Atlanta Motor Speedway next week, followed by a three-race swing out west at Las Vegas, Phoenix, and Fontana. The next crown jewel event on the calendar will be the GEICO 500 at Talladega Superspeedway, to be held 3 May.
Last edited by a moderator: Feb 23, 2015
Reactions: Queequeg, Norbert Leitner, Dennis Phelan and 1 other person

I just like how when an F1 race is over, the winners get a $15,000 giant bottle of Dom Perignon, in NASCAR they get a generic bottle of champagne in a NASCAR bottle coozie.

Only in America...
Reactions: jackrothermel