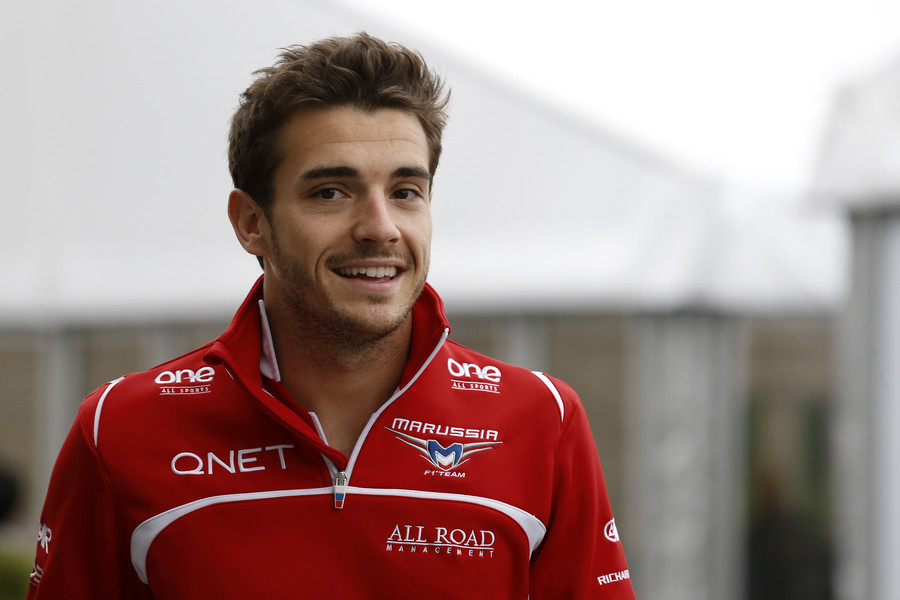 On a wet Sunday at Suzuka, Formula 1 fans were exposed to both the very best and worst of the sport.

“There are only three sports: bullfighting, motor racing, and mountaineering; all the rest are merely games.” - Ernest Hemingway

In the days prior to the 2014 Japanese Grand Prix, there was much discussion about the effect rapidly-approaching Typhoon Phanfone would have on the race. Looming off the coast of Japan, predictions of an undrivable deluge precipitated calls to move the race forward, either to earlier Sunday or immediately after Saturday's qualifying. Beside fears the typhoon would pose logistical problems for the teams heading to Sochi immediately afterwards, the main concern rested in the knowledge that if the typhoon made landfall before or during the scheduled time, there would be no race at all.

It's a sign of how far the sport has come that safety concerns due to the rain weren't about whether it would be safe to race -- it was a given that would be taken into account -- but if the conditions would allow for the use of the medical helicopter, or give fans anything more than a parade behind the safety car. Since the deaths of Ayrton Senna and Roland Ratzenberger 20 years ago, F1 has very much succeeded in removing the spectre of disaster from race weekends, and yet, there are still incidents like Jules Bianchi's crash on Sunday, where we get one more unpleasant reminder of the sad reality of motorsport: it will never be completely safe.

The act of driving an automobile fast is, at its core, a losing battle with perfection. It is always possible to set a better lap time, to design a better car, to be fitter both physically and mentally, but this notion applies just as much to safety too. We seek to protect the vulnerabilities of the human body by striving for invulnerability in the machine itself, and yet that is something we can never truly achieve. As long as there is racing, that risk will be present. It is a morbid undercurrent that runs throughout the sport -- an incident of this magnitude will almost certainly happen again.

Hopefully, the FIA uses Bianchi's experience to continue to improve driver safety, so that the risk they face to their well-being continues to get smaller, but we should never lose sight of the fact that these drivers put their lives on the line every time they hop into the car. Right now there is too much we don't know to start pointing fingers. However, what we can do is continue to offer our support to Jules, Marussia and the Bianchi family at this incredibly difficult time. Jules, we look forward to seeing you back in the paddock in the near future.

If you'd like to show your support for Jules and drivers everywhere, please consider making a donation to the Henry Surtees Foundation for assistance to people with brain and physical injuries. Any contribution would be greatly appreciated.

A quick look at some of the other stories to come from Suzuka: 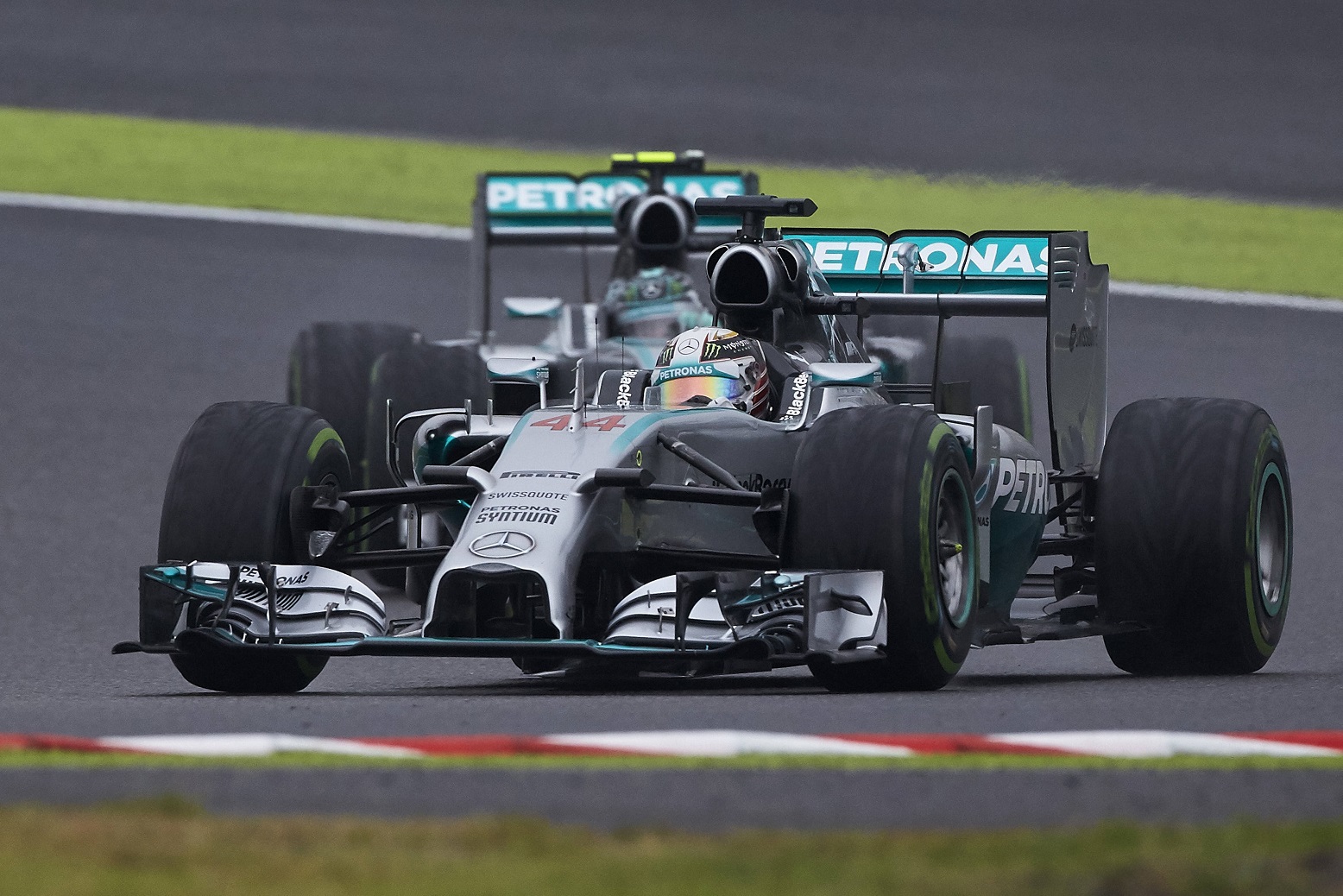 Hamilton Does His Talking on Track to Extend Championship Advantage

A month ago he was looking at an almighty struggle to take the championship lead back, now Lewis Hamilton has to really fancy his chances.

Despite trailing Nico Rosberg by nearly two tenths of a second in Saturday's qualifying, Hamilton was comfortably the faster of the Mercedes pair when it came time to race on Sunday, besting his German teammate by over nine seconds. It was a classic Hamilton drive, as he managed to use the tricky conditions to his advantage in hunting down Rosberg after the first round of pit-stops, taking the lead for good on lap 29.

The race seemed to illustrate the stark difference in form between the two drivers that had started in Monza. After a fairly regular start for both, Hamilton quickly settled into his groove, while Rosberg started really struggling with his car. Whether it was a difference in set-up or just driver comfort-level, Rosberg was clearly agitated in the cockpit, complaining of oversteer on team radio as Hamilton hunted him down with all the inevitability of a Jaws movie. It was the sort of race where Rosberg must be asking himself what more he can do, for it really is starting to feel like Hamilton's year.

As a neutral I hope the German can right the ship and at least send us to Abu Dhabi with the 14-point gap needed for a winner-take-all race, but that needs to happen very soon. The good news for Rosberg is that Sochi is this week, and he'll have a chance to get some quick revenge. The bad news is Sochi is this week, and if he misses that chance he will be in major trouble. It's not exactly a controversial opinion that Hamilton is the faster driver, but Rosberg has been able to make up the defecit with his racecraft. Having been comprehensively outraced in Japan and Italy won't do his confidence any favours.

"Other Man" in Driver Market Stakes His Claim for 2015 Drive

While the hubbub surrounding the 2015 driver market certainly deserves an article of its own, Japan provided us a great opportunity to take stock of the one man who stands to lose the most - Jenson Button.

Looking at the prospect of no drive in 2015, Button put in a classic drive to take fifth behind the two Red Bulls. Button's gamble to pit for intermediates as the safety car came in on lap 10 paid off in a big way, as the 2009 world champion found himself sitting in third after the first round of stops. Driving a McLaren that was clearly still down for pace on the top of the field, Button gave the heavy hitters at Mercedes and Red Bull a serious run for their money, matching fastest laps with the Mercs and proving incredibly difficult to pass for the Bulls -- his duel with Daniel Ricciardo was possibly the highlight of the race. If it wasn't for a mishap during his second stop, Button could have even been looking at a fourth, and yet at just 34-years-old, he may have scant opportunity to race for much longer.

Barring some dramatic turnaround on the part of Fernando Alonso, McLaren seems set to start the Spaniard and Kevin Magnussen next year. Ferrari has Sebastian Vettel to accompany the incumbent Kimi Raikkonen, Red Bull has already moved to replace Vettel with Daniil Kvyat, while Williams will be retaining the services of Valtierri Bottas and Felipe Massa. Perhaps his only hope is at Lotus, if they get sick of spending Pastor Maldonado's cash on repairing Pastor Maldonado's car, but there's no guaranteeing they'd be competitive, which is the same reason he wouldn't consider any other team. Of course, if Caterham, Sauber and Marussia/Lotus end up leaving the sport, three car teams could provide a lifeline, but that still might force a move from McLaren if they wish to blood another youngster in Stoffel Vandoorne.

Performances like the one on Sunday show that Button is more than capable of delivering results given a competitive car, but in a market that seems to be based exclusively around teenagers and multiple-world champions, the Brit might simply be out of luck. Fingers crossed that's not the case.

Any thoughts on Jules Bianchi, the title fight or Button's plight? Sound off below.