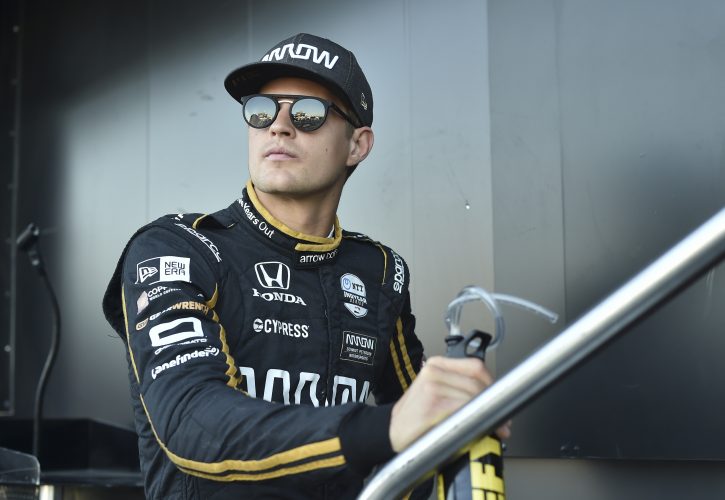 Ericsson, 29, has enjoyed a solid debut season in the NTT IndyCar series for his current team Arrow Schmidt Peterson Motorsports, scoring a fortuitous podium position early in the year as he generally matched his highly rated teammate James Hinchliffe in the black and gold liveried Dallara machine.

Despite a very solid debut year in the American series, it will come as something of a surprise to hear that the former Sauber F1 man has secured a third seat at the illustrious Chip Ganassi Racing team, partnering up with multiple series champion Scott Dixon, and fellow Swede and rookie sensation Felix Rosenqvist for the 2020 racing season.


"First of all I’m extremely happy and proud to get the opportunity to join Chip Ganassi Racing" said Ericsson of the announcement today.​
"It’s a team of winners and their history speaks for itself. I’m very thankful that they believe in me and I will do everything I can to make 2020 another successful year for the team. I’m also very excited to work with two of the best drivers in the series in Scott and Felix. I’m looking forward to putting what I’ve learned this year to use in my second year in the NTT IndyCar Series.”
​
Ganassi are coming off the back of a slightly disappointing season in 2019, with five-time champion Dixon trailing home fourth in the overall points at season end, securing two race victories as he finished 63 points adrift of 2019 Champion Josef Newgarden.

For the record, new team mate and fellow 2019 rookie Rosenqvist finished sixth in the final standings, 135 points and 11 places ahead of Ericsson at the conclusion of the 17 race season.

Me think that Romain Grosjean is veeery satisfied with that

I knew the rumors that Ganassi was probably going to use some of their former Ford GT crew to re-expand their IndyCar team, but I really didn't expect that seat to go to Marcus.

No offense to Marcus. In my opinion he has done better this year than most give him credit for. But I really thought they might get Hinchcliffe, Ferrucci, or possibly another rookie

boomn said:
No offense to Marcus. In my opinion he has done better this year than most give him credit for. But I really thought they might get Hinchcliffe, Ferrucci, or possibly another rookie
Click to expand...

Yeah I'm surprised by the choice too tbh. I suppose he has age on his side (only 29), but with enough experience to produce decent performances without having to take years to mature.

If I'm cynical about things, I suspect he maybe comes with some $ backing too that maybe swung the pendulum his way..

On a separate note, I'm surprised Bourdais hasn't ever found a faster seat in recent years. He might be cracking on age wise, but for the last few years he's been absolutely epic, and in a top team must be good bet for title challenger... ?

Who cares about IndyCar with that aeroscreen now

Aeroscreen worse than Halo? I don't think so.

Paul Jeffrey said:
If I'm cynical about things, I suspect he maybe comes with some $ backing too that maybe swung the pendulum his way..
Click to expand...

Your guess is correct. Ericsson has significant backing, rumored to be about 3 million per year

JTRaceFan17 said:
Aeroscreen worse than Halo? I don't think so.
Click to expand...

Ericsson didn't exactly lit the track on fire, he was for the lack of a better description "very Marcus Ericsson".

I don't get Ganassi, seems he learned nothing with Chilton.
N

Paul Jeffrey said:
On a separate note, I'm surprised Bourdais hasn't ever found a faster seat in recent years. He might be cracking on age wise, but for the last few years he's been absolutely epic, and in a top team must be good bet for title challenger... ?
Click to expand...

Hmmmm i don't know. Sure Bourdais still has his moments where he
shines but on the other hand one must also say that he often didn't look
very good against his (rookie) teammate Santino Ferrucci.
Sebastien finished a few points ahead of him in the championship at the
end but nevertheless i had the feeling Santino was the better driver this
season.
He's not the same anymore who he was 15 years ago + when he was
the dominant driver and won 4 championships in a row the field was not
nearly as deep and good as it is today. Champcar was dying.
Despite that i really like him and hope he'll stay in Indycar for a few
more years.

Lolz I think it's just better off closing the cockpit like the prototypes. Both aero screen and halo looks absurd on open wheelers. Why not just make them look like jet fighters already. Those things always looked so good anyways.

As to Marcus, I wonder if he is still "on call" at Sauber, or Alpha, like last time at Spa when he was there to replace Kimi at any moment.
M

From whatever Indycar I was able to watch this year, I thought he did quite well for his rookie season. Granted, he'll probably never be champion, but he was competitive and I think he can win the occasional race, a bit like Sato, for example.

And yes, he probably brings some money which allows Ganassi to run a 3rd car. But that's always been the case in motor racing and if he's able to get financial support, good for him.

I guess Chip has forgotten he once hired Nicolas Minassian......
M

Another car from a good team is always welcome and Marcus had a respectable rookie season with a team that is kind of like Red Bull in Indy Car - good enough to challenge for a couple of wins but maybe not a championship. Year two with a top team could be a great opportunity for him to run at the front - BUT it's also another adjustment to a new team, and even the best teams don't always challenge for wins with every car (unless it's Penske). So, we'll see.