Take a video tour of one of the biggest (and best) tracks in sim racing.

LA Canyons for Assetto Corsa is an incredible creation by community member @Phoenix77. Spanning a ridiculous 42km in length for the standard version (with a further 73km available by way of donation), the mod is by far and away one of the largest and most impressive pieces of road anywhere within the sim racing genre. 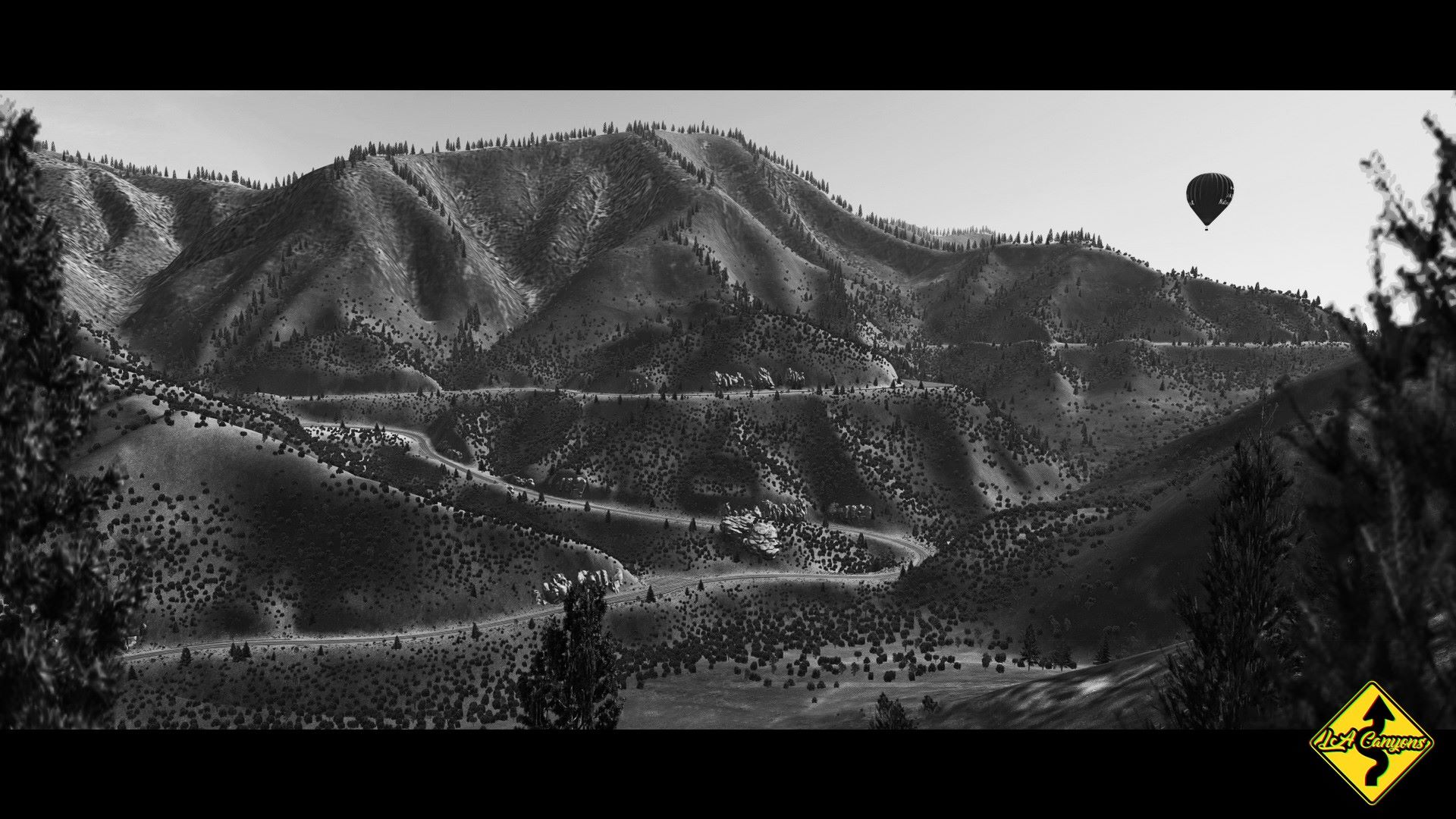 Developed as a labour of love, the mod has grown beyond measure in the months since it initially surfaced here at RaceDepartment back in April 2017. What started out as an ambitions dream to build a large scale recreation of some incredible Californian road has turned into something of a masterpiece by Phoenix 77 and friends. Featuring tight and twisty sections joined together by super fast curves through the scenic backdrop of California, LA Canyons is a visual as well as a driving treat for simulation racers.

Covering an incredible 900km² of California mountains and canyons, this is a seriously massive mod for AC that easily ramps up the scale initially thought possible in AC. Main roads, side roads, service stations... it's all in this track! If ever you fancied something a little different to the traditional Grand Prix style circuit, then LA Canyons is for you!

@Phoenix77 said of the development of LA Canyons:


Well the inspiration for the canyons came from seeing a video on 'The Smoking Tire' YouTube channel... Specifically this 488GTB video was the trigger...

There were many, many hurdles to overcome with this build, mostly due to knowing what a certain command or feature in Max was called... and what menu to find it hiding in! Also there has been a lot of work organising the scenery and roads into small enough pieces to get it into the Kunos editor, naming road meshes to get different surfaces.

Another hurdle was using 110 million polys (at one stage) when getting the high resolution road meshes (optimised back to a more reasonable 1.8 million polys).... My PC only really liked working up to 10 million polys at a time... so there was plenty of dividing and organising.

I'm pretty proud of spending approximately a month or so getting the roads lined up to the stupidly high res satellite photo... And to hear the people local to the area say it's very accurate... I was extremely pleased to hear that...

I've lost track now (no pun intended)... but I think 6 or 7 people local to the area have said the roads are very accurate to the real roads. Maybe not perfectly accurate... but using a starting satellite image with 5.6 billion pixels certainly helped!

Version 0.5's total rework was started around January 2018, so approximately 9 - 10 months work for the rebuild... until where it's at now. Hundreds of hours.

That's not including the hundreds of hours Ben O' Bro (Caterham author) has put into the foliage and lots and lots of the detailing. Not to mention all the help he's provided me for 3DS Max. He's been an absolute star!

I can't state enough just how helpful Ben has been to this project... One of the coolest dudes on Race Department... and has supported this crazy project almost since day one... By recommending plugins and scripts that would prove useful.

Also the guy who recorded the AI lines... went to the trouble of learning Blender just so he could help out with the track edge boundaries... And is a really awesome, consistent driver to record a 42km AI line... It takes an hour just waiting for an AI line to save around the canyons!​ 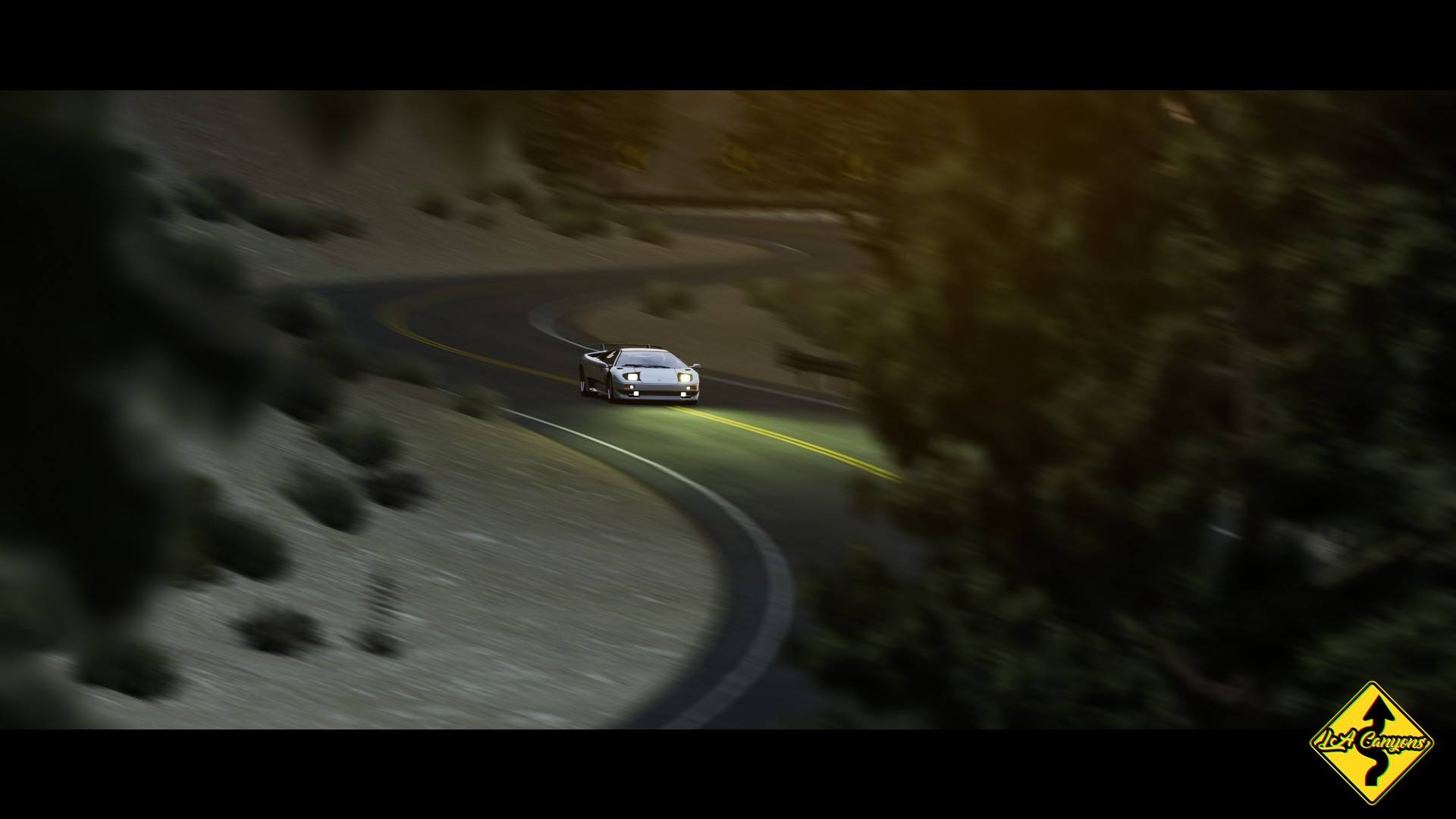 Available to download HERE, LA Canyons is not only the largest track mod currently available for Assetto Corsa, but arguably one of the best. Out of the very top drawer in terms of quality and performance, nothing you see within this mod has been done quickly or without the due care and attention a project of this scale deserves.

The level of foliage density, the track road mesh, the seemingly endless number of offshoots and viewing points to enjoy are all designed to take the breath away and give the player yet more reason to sit back and marvel at what has been achieved here with this track.

If you like to go fast, sideways, slowly or in pursuit of others or on your own, LA Canyons feels like it can cater for just about any taste you might have.

Let's put it this way, the track is as awesome as it is large.. and it's one large track. 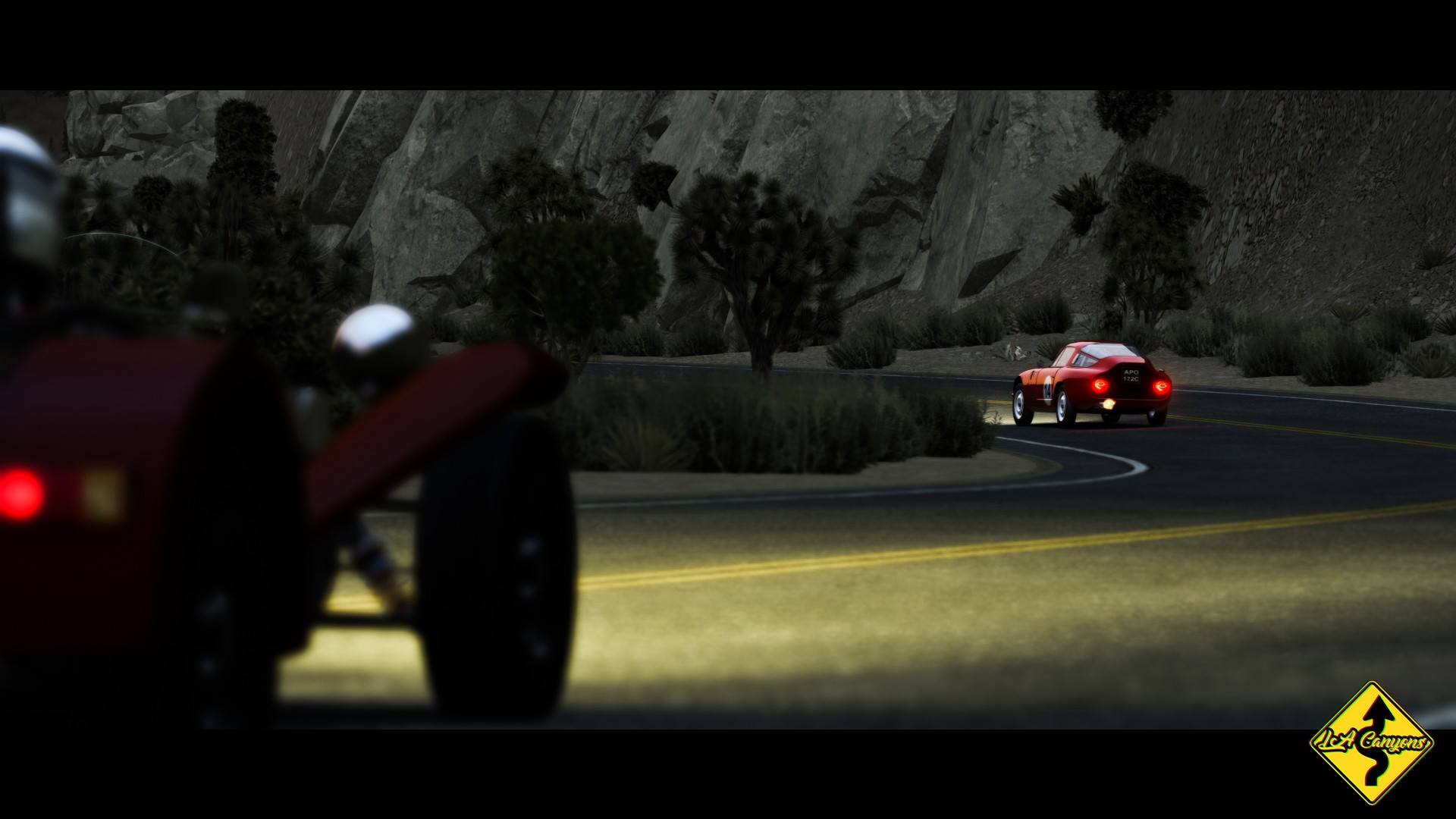 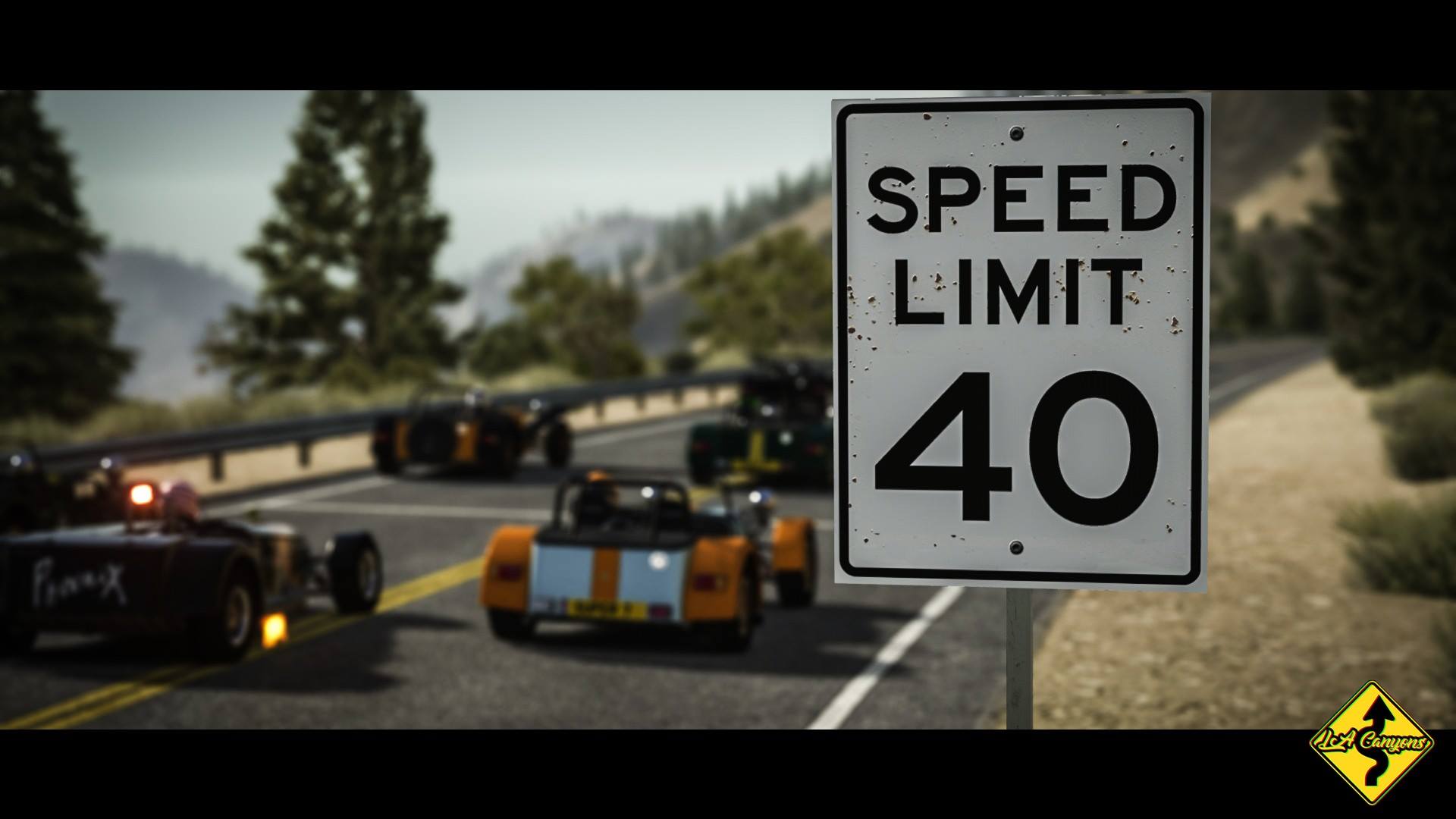 Finishing of a with a few final words from the author, if people thought LA Canyons was near completion, think again!


What is left to do...The same detail on the extra roads... around the same amount of work again, maybe even a little more. I have some template elements made up, road signs, barrier sections... so some of the work is already done. Oh, and a large chunk of the terrain is already done.

Some more road edge smoothing, checking on google street view where barriers / road signs are placed. I've adjusted the road signs a little as cars will be obviously driving a lot faster than in real life... and also moved some a little earlier to server as braking markers more effectively.

Terrain textures have plenty of room for further improvement... mainly work on the mask... and diffuse (colourmap), then blending all the textures better when it's setup 100%. I will also be making some Helicopter cameras for it...

​
So all in all, a pretty exceptional mod looks like it will be getting better still in the months to come. I can't wait..

Please, if you download a mod here at RaceDepartment, spare a thought for the modders who put in such incredible work for us to enjoy. Leave a comment and rating for the mod, and let those responsible for continuing to bring us such entertainment know how you feel about their work.

Alex72 said:
So JSGME is better for these mods? Was about to install CM but i had those thoughts about this light mod. Wondered if the light mod works like proper lights and only show itself and possible performance impact when the headlights are on or maybe its always on and its better to uninstall the mod when driving day time.
Click to expand...

I just use that so I can keep my Assetto as stock as possible while making the track... I still have to venture into using CM... I'm pretty sure CM can more than likely switch mods on and off... I also use JSGME as it's pretty simple. I haven't looked into CM as I've had enough to learn with 3DS Max, Kunos Editor, Photoshop, Plugins, scripts etc... etc....
I didn't really fancy learning something else on top of all that.
Upvote 0 Downvote

If anyone want's a preview of what a night time canyon run's like....

Tberg said:
It's not hard at all now, with all the foilage, signs and barriers added.
Of cause, if you pass a turn sign with 200+km/h, it's gonna get hairy
Click to expand...

Ahhh so THAT'S my problem!

I've been into PC2 for a while, mostly. One thing I noticed going back to AC for this mod is that I get a much better sense of speed in that game. No idea why. Probably a lot of smaller things that add up? It's a shame because the FFB I get in AC is still light years ahead of PC2 which always feels vaguely disconnected. And of course, having no mod tracks or cars in PC2.... sucks so bad.

This really is a fantastic mod.
Upvote 0 Downvote

Tberg said:
It's not hard at all now, with all the foilage, signs and barriers added.
Click to expand...

Makes a huge difference in drivablility. As soon as I venture out into the naked, unfinished areas, I crash within 5 turns.
Upvote 0 Downvote

gamer19 said:
Great.
Just... If someone can convert it [one day] for Competizione.
It's kinda hard these days to fire up that "old" engine now. Sorry.
Click to expand...

Tried it in VR yet? If not, you haven't tried it at all.
Upvote 0 Downvote
You must log in or register to reply here.

Tutorial: How to make a physical mesh for your track

M
Why are there so few road car races online?

Mods can´t be installed on server