I'm in love with Lando Norris 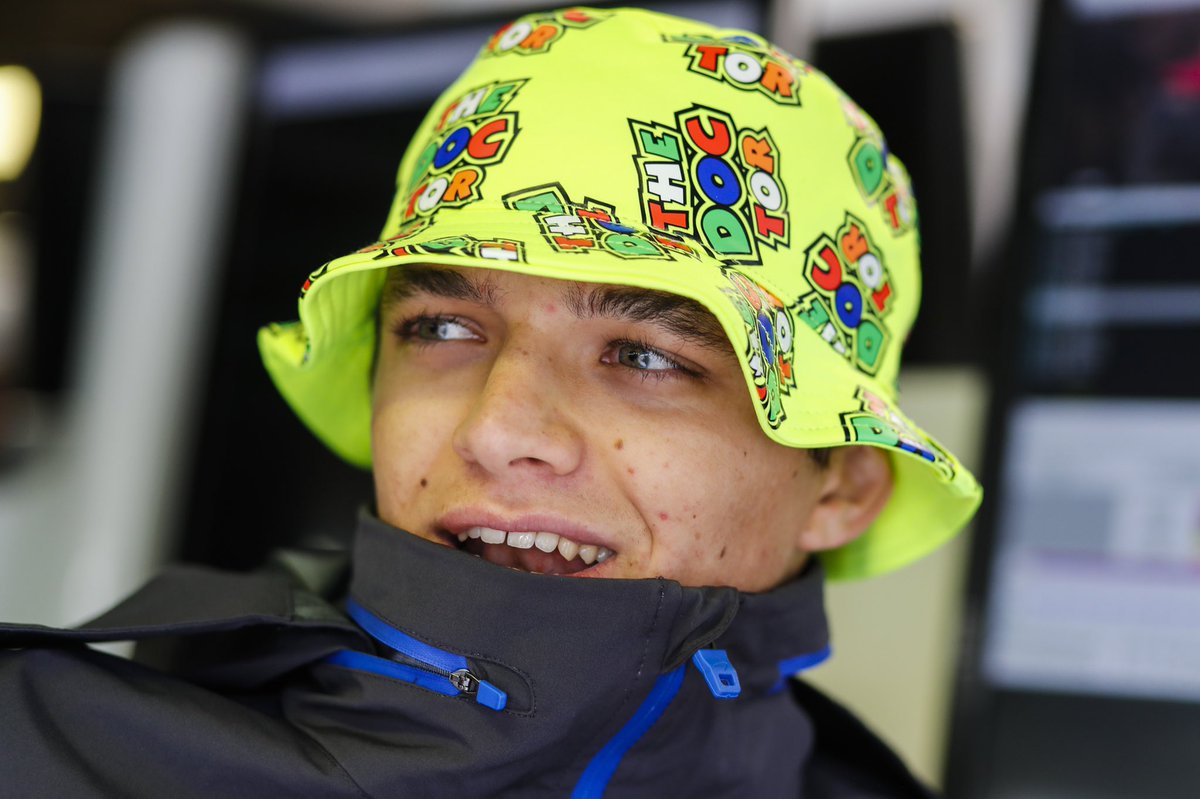 Watching Ted's Notebook on Sky Sports on Sunday after the race at Monza, I found myself laughing out loud as Carlos Sainz hit Lando Norris in the crown jewels and realised that I'm in love with Lando Norris.

I'll be honest, I had heard his name before Mclaren announced that he would be driving for them in the 2019 F1 season. But other than that I didn't really know much about the British driver, had not watched much F2, but this season I have watched more races!

This next paragraph will make many of our readers feel old.... (including myself)

Born 13th November 1999 which means the young man is 19 years of age, he is part of the next generation of F1 drivers who are making waves as the older drivers such as Hamilton start to have thoughts about what comes after F1.

If you follow Norris on any social media platforms, he is a lover of humour and will often post memes. After the strange Q3 qualifying session at Monza, he proceeded to post the following:


He also has a vlog on Youtube, to which he hadn't posted on for a while, that is until recently. His latest video is an entertaining one, he went to watch the MotoGP at Silverstone and got to meet his hero Valentino Rossi and after the race went to buy some Rossi merchandise which was hilarious. Since then Rossi sent Lando some gear, which he has been seen wearing around the F1 paddock.

Many of you will know that Lando has his own Twitch channel, on that he streams his on-line races and will often be joined by Max Verstappen. I watched a highlights reel that a fan had put together, which contained a clip of him playing this song to Max.

Lando comes across well on the streams or when he is being interviewed, he has an infectious laugh and a real passion for motor sport. I think everyone felt his emotions when his car gave up on the last lap of the race at Spa, after a great start he had an uneventful race until that moment and was on course for his best finish.

Think it's fair to say that Lando has a distinctive laugh, you'll remember he recently lost the plot during a recent press conference which involved a certain Daniel Riccidardo which you can view below.

I've been really impressed with the young Brit, who alongside Carlos Sainz is building something special at Mclaren. Not only are they helping the team move forward this season, I see a bromance has developed between them. They tend to get up to shenanigans when being interviewed together and are constantly ribbing each other on social media.

He has impressed me on track, showing he has some race craft and McLaren have awarded his performances with another year at the team. After the qualifying at Monza he talked about meeting objectives that were set, he seemed really chuffed with himself and that made me happy seeing how pleased he was.

Seems to be someone that is enjoying himself, a little Riccidaro like. Lando often talks about Sim Racing which means he is introducing it to a mainstream audience, which can only be good for the hobby that we know and love.

It's hard to put into words how I feel about the young man, it's so refreshing to see someone so passionate and isn't afraid to put himself out there like he does. It's clear that he and Carlos have the utmost respect for each other and I hope that continues, part of me wonders if they were challenging Mercedes would the relationship be the same? I like to think it would be.

McLaren have their own Youtube channel where they upload videos of Carlos and Lando playing old school games against each other, entertaining stuff and again demonstrates their great qualities as team mates.

Lando Norris is a respectful young man who is doing something that he loves, I for one hope he is round for years to come. Thank you Lando for being you, you are one of the reasons I look forward to watching an F1 race.

Click below to see the incident I refer too where Lando is hit in the crown jewels.

Yeah, me too. He is so genuine, what you see is what he is, no fake. I only hope mclaren dont screw this up, when lewis or Sebastian decides to retire. This is better than Mika-David era.
D

I agree I feel completely the same about him. What an awesome driver and human being. Lando is besides his professionalism an emotional guy which make him so Real. Because Real Mans can cry I have the biggest respect for this Guy and I wish him in his career all the Best.
T

Tottaly agree with you! its great to have people like this in the F1
NIce article as well fun to read!

The current crop of rookie drivers seem like really level headed nice guys. At ease with themselves and in front of camera, Fast too, a credit to themselves and the sport.

Paul Glover said:
Click below to see the incident I refer too where Lando is hit in the crown jewels.
Click to expand...

Not available in my country

Ole Marius Myrvold said:
Not available in my country
Click to expand...

Ole Marius Myrvold said:
Not available in my country
Click to expand...

Same here mate. We are left out of the banter

Ricoow said:
Same here mate. We are left out of the banter

Lando is the only reason I'm following Formula 1. He seems to enjoy himself and not take anything too seriously, but at the same time he has the skills and competence to become one of the best. Great lad!

I'm pretty sure team progress will grind to a halt if you team him up with Danny Ric. Maybe starting a comedy bar is better than an F1 team. Anyways, this guy is entertaining. I don;'t know how he can separate hilarious streaming and getting his head down during races.

I've had the rare opportunity of racing with him twice before I quit iRacing 2 years ago. He's quick of course, but he talks to everyone who greets him. That was way back. Right now, I can't say I am cheering for him. Maybe because I know it's a lost cause with his car and team. But I wish he will have the chance in the future to have a winning car and actually prove himself. And his race at SPA genuinely broke my heart.

Im a fan for sure , he the first British driver ive liked in a long time, maybe since Jenson Button.
Hes not cocky , hes super talented and hes a simracer who streams

Bastian93 said:
Lando is the only reason I'm following Formula 1. He seems to enjoy himself and not take anything too seriously, but at the same time he has the skills and competence to become one of the best. Great lad!
Click to expand...

He is really growing on me as well. I must admit I wasn't a big fan before as there was quite a budget behind him from the early karting days. But he doesn't seem to have grown up to be the person I feared he would be
And compared to a certain other simracer - turned F1 driver, Norris seems genuinely like a fun guy to hang out with. And a bit awkward!
B

You can't help but like the kid. Both he and Carlos come off as very natural, likeable chaps, which is odd to see in these days of "shock celebrity".

Glad you are out of the closet, Paul!

Good to see some personality on the grid - F1 can get serious to the point it's tiresome. Drivers with fun personalities are a good antidote!

Dr. Death said:
Glad you are out of the closet, Paul!
Click to expand...

No closet mate, just an appreciation of another man.

Bunkiester said:
But... I can't get that Super Max song out of my head now... gee, thanks for that!
Click to expand...