Bjarne Hansen said:
Would say a diy Edtracker is less than 30 US$
And no light requirement and no camera.
Click to expand...

Premium
From what I've heard EDTracker is dead. But seems like you can still source DIY kit.

Thanks everyone for pitching in with the suggestions, it was a tough elimination round, honestly I wasn't planning to get TrackIR to begin with, but after painful considerations and long research ended up with one.
From my previous experience with FaceTrackNoIR and Aruco it actually works, and much, much better than I expected.
One more happy NaturalPoint customer.

BrightCandle said:
There is also SmoothTrack that uses your phones camera and pumps the data to OpenTrack over USB which is seeingly quite popular. A friend of mine has been using it and been pretty happy with it.
Click to expand...

This is exactly * what I'm using and technically it works great, however I decided I don't want head tracking for sim racing - I find it too distracting. I love it for more relaxed sims like ATS and MSFS - definitely worth the £9.99 spend on the SmoothTrack app!

I'm running SmoothTrack iOS app on an iPhone XR which has a depth sensing front camera. Your mileage may vary with other devices!

I used to have a Tobii eye tracker but sold it after upgrading to a 49" ultrawide, since it wasn't compatible with a monitor that large.

* I connect SmoothTrack to OpenTrack over wifi instead of USB
Last edited: Mar 5, 2021
A

I wanted to update here for those that are looking to do a 'wireless' mod to their Track IR pro.

First point, I can confirm that some of the power-bank batteries DO shut off automatically when connected to the Track IR. I purchased a very cheap single cell rechargeable battery similar to the one that @Andrew_WOT posted earlier (link) and although it was not exactly the same one, I did find that it had some sort of control to turn the power supply off after about 5-10 seconds. So, inserting the TrackIR was not enough power to convince the battery to keep sending power.

Then, I got annoyed. So, I found a way around it.

I disassembled the case around the device I bought and it was simply a battery and a usb board. I kept the USB board simply to be able to charge it.

I direct wired the +/- connections from the battery to the TrackIR leads with a simple on/off toggle switch so that the power would not be running through the usb board. This ensures that the power does not get stopped for whatever reason is encoded into the small circuit. At the same time, I kept the USB board so I could easily charge the battery with the connections.

It's not pretty, but it works perfect. It's wrapped in some vinyl that's been heat-shrunk but I will clean it up with a sort of light-weight cover soon. It is a lot lighter than the previous version I made with the larger battery. Haven't tested yet how long it will last but I'm confident it will be well enough for even my longest racing sessions. Will post again if I find out anything differnent.

I modified the connection to my headset, and used an old hard-drive magnet which holds it tightly in place. Much better than before. 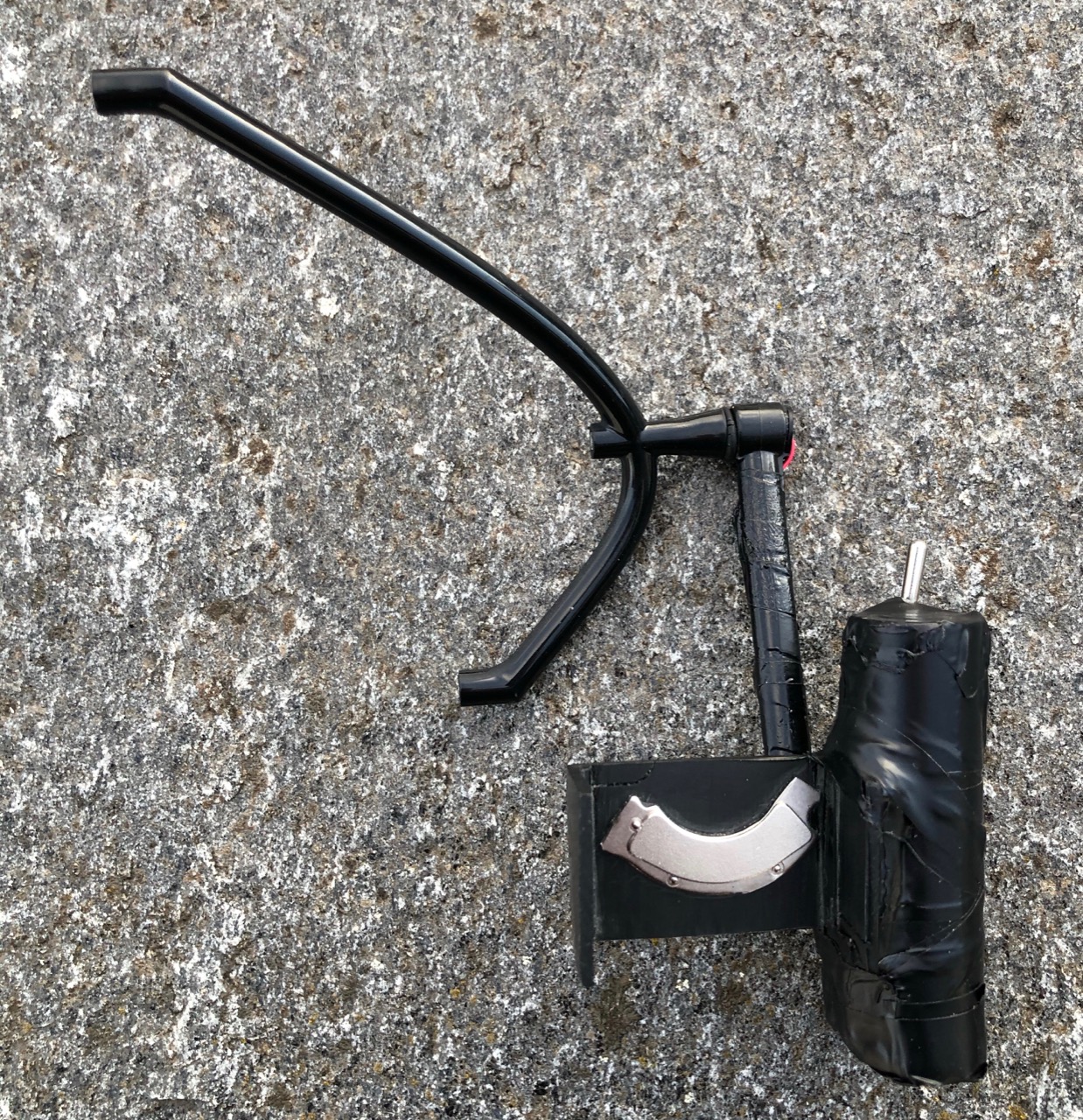 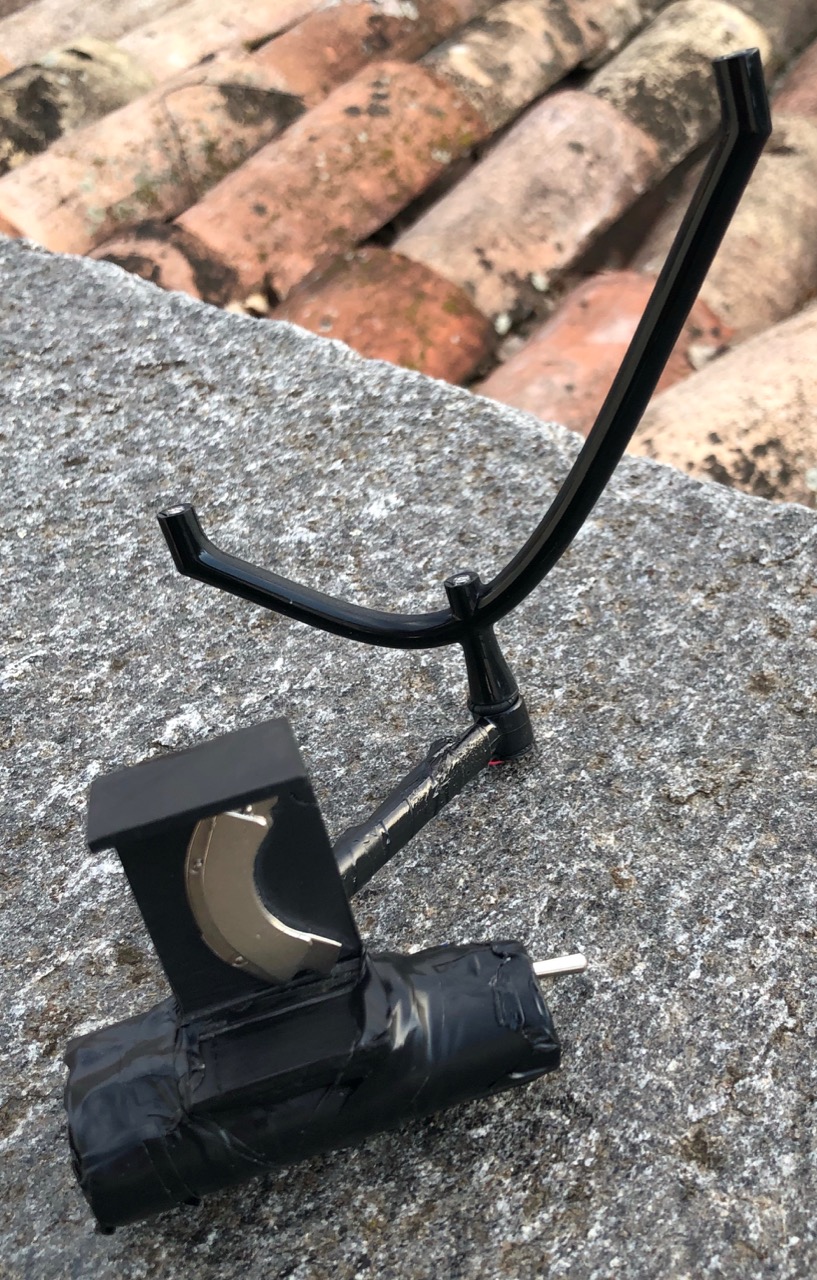 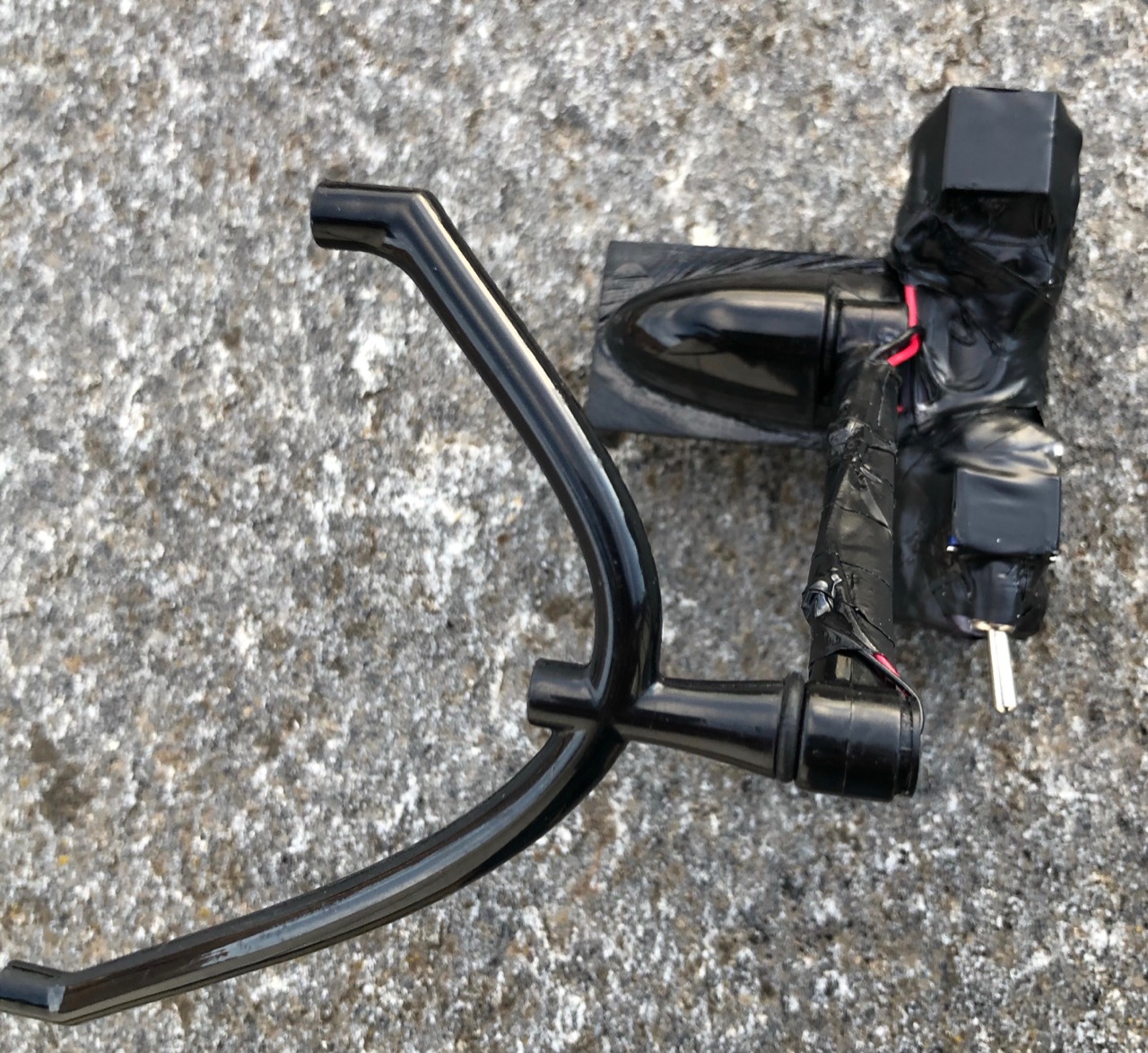 Premium
Nice, very creative, thanks for heads up on power cell shutting off.
Do you have any concerns with that big rare earth magnet so close to the head?
BTW, this also works as "wireless". 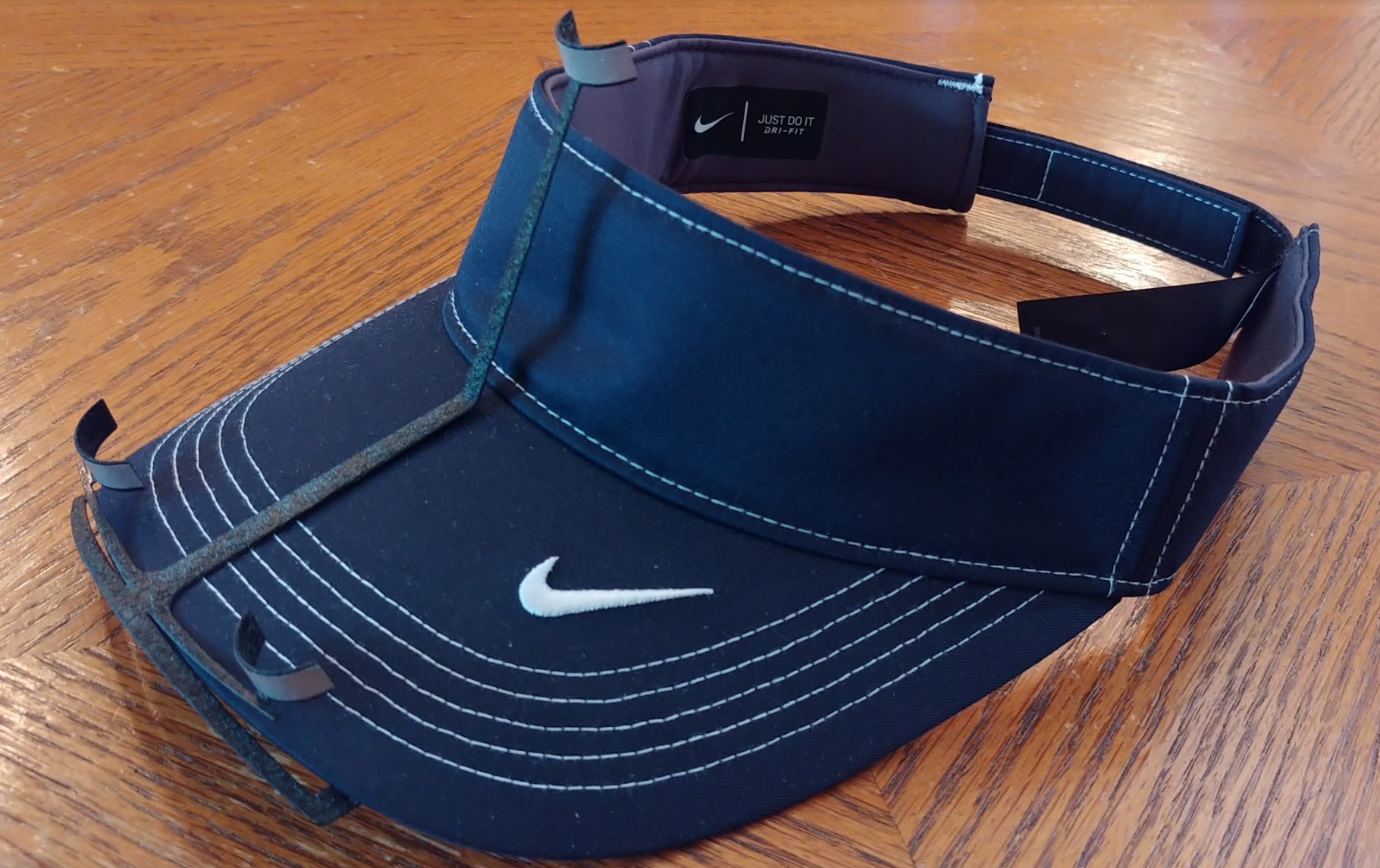 With over ears headphones I just run ClipPro wire along the headphone cable joined by 1/4" cable sleeve.
A

Andrew_WOT said:
Do you have any concerns with that big rare earth magnet so close to the head?
Click to expand...

Well. No but maybe I should? Maybe I need to do some research on that???

Premium
Another thing is headphones speakers, this magnetic field will definitely create some sort of interference with voice coil movement.
C

Don't worry. I wouldn't personally use magnet for this, because why when good velcro works just as effectively, but it won't do anything to you or to your headphones.

Effect of Other Magnets Nearby
Recall science class when iron filings are dropped onto a piece of white paper over a magnet. The filings trace lines of magnetic force. If another magnet is pushed nearby, it changes the lines of force. Hence, a powerful magnet near your speaker is going to distort the lines of force and distort the sound. Keep your magnet away and the speaker should be fine, unless you are keeping very powerful magnets around the house.
Click to expand...

And some reading on having one near brain.

What happens when there is a strong magnet near brains? - Quora
Last edited: Mar 22, 2021
C

While I guess in theory both of these things would be possible to achieve under very specific circumstances, it would take a lot (A LOT) of effort to actually achieve them, and would certainly involve much stronger magnets that the relatively puny one we're talking about here. Especially in case of affecting the brain (I mean MRI is a thing, and the magnetic field of an MRI would be hundreds of times stronger than a magnet such as this, if not thousands...), but even with the headphones it would be pretty hard and you would have to do very specific things.

For anything else...have fun! (And don't forget to shield yourself from the 5G networks.)

Premium
Rare earth magnet from HDD is extremely strong. Dynamic speakers are working on principals of magnetism and electromagnetism that move voice coil around, add strong magnetic field that introduces additional pull in different direction and you'll have an issue. Not sure about severity, depends on headphones impedance, sensitivity, and strength of the magnet, but they will perform outside intended operating range.
Last edited: Mar 22, 2021
C

You vastly overestimate the strength of the magnetic field of the magnet in question, and you also vastly overestimate the effect of an external magnet to a speaker/headphone (both due how the voice coil and the magnet assembly work and are designed, and due to how close you would have to get and how strong the magnet would have to be). I really don't know what else I can tell you. But I almost feel sorry I don't currently have a magnet handy to see it not affect my headphones in the slightest.

(There are even actual magnetic holders (with rare earth magnets, yes) made for use with headphones, for example for headset-like microphones, BTW.)
Last edited: Mar 22, 2021

Premium
You really don't want to see a comparison between these little magnets and the electrical radiation of things like a DD wheel or VR headset.

When I plug in my guitar, the position of my Fanatec PSU (just the little black brick for the CSW) matters a lot. Also if my monitor is on or off makes a difference to the noise.
If I put my guitar next to my pc and run a stress test for CPU and GPU.. Oh dear

However I can move around with some Neodym Magnets or my phone without issues.
Only if I get a call it starts to become an issue, we all know phone call effects on active speakers when the power stage picks up the signal.

Premium
Sounds like you have some serious ground loop issues?

No no, it's just the pickups and electrical fields/radiation interfering.
It's not there with clean tones, just with heavy distortion, completely normal.

It's just a fun way to find out what is radiating how strongly. The fanatec psu for example only really radiates in 2 directions. If I slightly rotate it, the noise goes away.

It's also not 50 Hz.. If you wanna have an example noise:
2:25min into the video he opens the volume pot on his guitar in front of the PC

Premium
So it's not just picking it up from powerline? Crazy. I had my share of ground loop issues with power amps, it was picking up all PC internal noises, HDD, mouse moving, etc, but it's all gone after I either switched to different outlets or used ground loop isolators.
Guess you can use guitar to track surveillance bugs.
Last edited: Mar 23, 2021

Andrew_WOT said:
Guess you can use guitar to track surveillance bugs.
Click to expand...

Just need enough gain on a distortion amp to detect anything
I remember when I had my PCI audio interface to hear the cursor movement on my headphones. Shouldn't have been a ground loop though since there was no power cable connected apart from the PC PSU one...

At first I found the noises from the guitar really weird so I decided to grab a laptop, connect my USB Audiointerface to that and plug my guitar in. Same noises when I held the guitar towards the Monitor, PC, even my Corsair RGB LED keyboard is giving some noise.
(if someone knows a tenkeyless, full layout keyboard (Pos1/end above the arrow keys) with flat keys please tell me )
Last edited: Mar 23, 2021

Case_ said:
Don't worry. I wouldn't personally use magnet for this, because why when good velcro works just as effectively, but it won't do anything to you or to your headphones.
Click to expand...

I use "3M Dual-Lock" better grab/tight fit not as loose as velco. Works well for me ... yes, you need to tweak User profile to your own custom liking as far look to right or left movement/acceleration required.

I've been using a DELANCLiP for about a year now and I've really enjoyed using it, in particular in these hot summer months when I don't want to strap on the VR headset.

I ordered the "DELANCLiP Gamer - Complete Kit (Wired)", although when I purchased mine you had to source your own mounting bracket. I used a wired headset when gaming so I bind the two wires together and so far I've not felt the need to go wireless. I use velcro strips (not the dots provided in the kit...I have an aversion to putting stickers on my possesions) to mount the clip to my headset.

The setup wasn't actually as bad as you would think, their website has tutorial videos you can follow, and once you've got it dialed in it's just a case of starting the application when you want to use it.

Sure I would have preferred a sleek looking camera on the top of my ultrawide monitor instead of a ghetto'd PlayStation Camera, but for a fraction of the cost...I'll live with it.

A ddw noob's perspective on the SC2 Sport