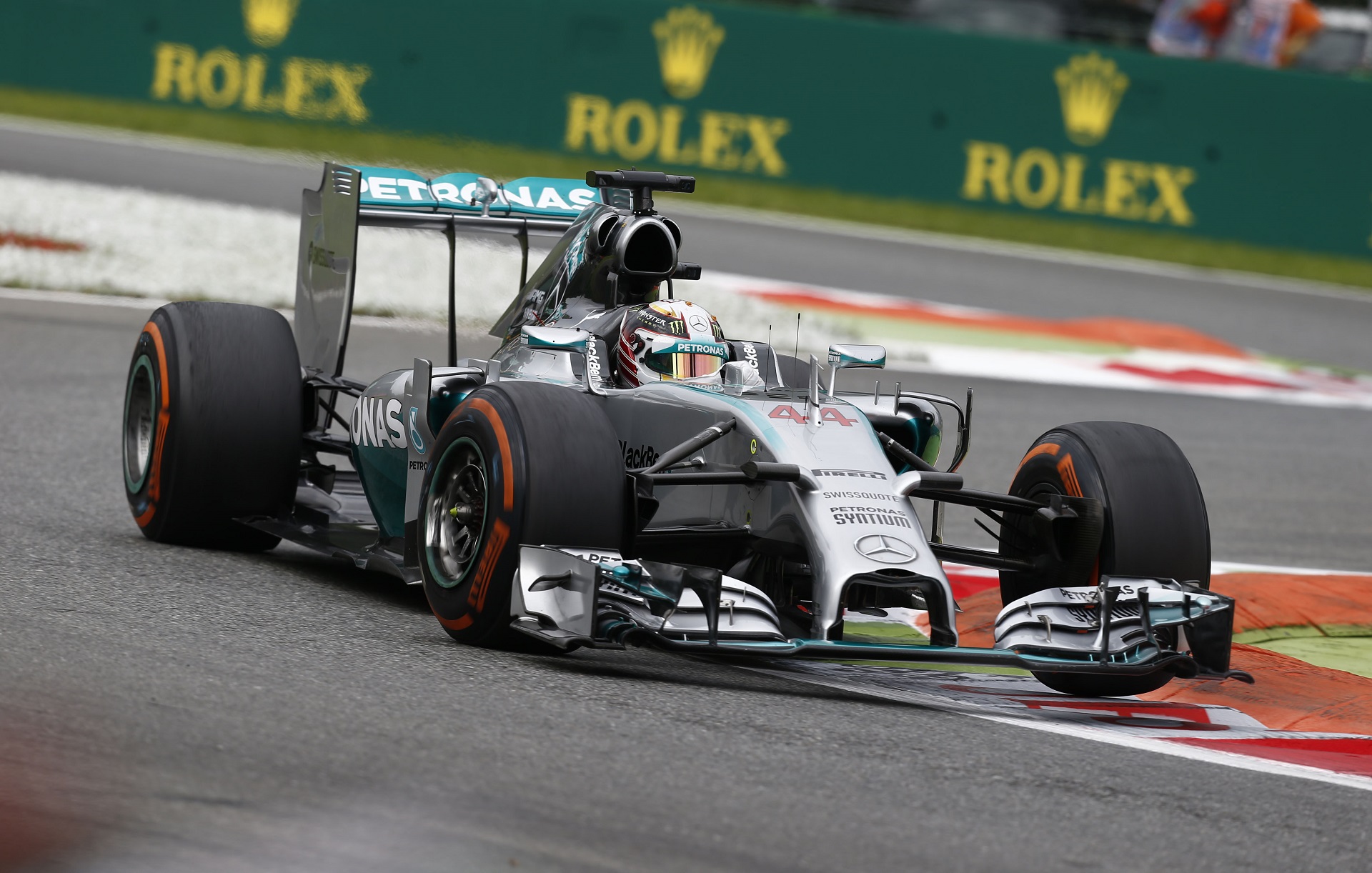 Mercedes' Lewis Hamilton will start from pole position in Monza, after finishing two-tenths ahead of teammate & rival Nico Rosberg.

After the dramatic events of the Belgian Grand Prix two weeks ago, the AMG Mercedes F1 team came to Monza with a feeling of slight trepidation, despite publicly stating everything was sorted between their two star drivers Lewis Hamilton and Nico Rosberg. The AMG Mercedes stance of still letting their drivers race is admirable, although it could cost them points again this season.

At this weekend's Italian Grand Prix it has seemed from Free Practice 1 yesterday morning that this weekend would simply be a straight fight between the two AMG Mercedes drivers, with the power advantage from their Mercedes engine giving their runners a huge advantage this weekend.

Whilst some faintly hoped the Ferrari and Renault powered cars would provide more of a challenge once the serious business of qualifying got underway, it didn't appear that way early on in Q1. From the off the Ferrari and Renault powered teams were using their two cars to assist in giving drivers a tow, showing they were willing to try anything to increase their top speed.

The first timed laps in Q1 were initially in the low 1m28 second bracket, before the AMG Mercedes and Williams drivers soon notched the bar significantly higher, with laps in the low 1m26's. With 10 minutes to go in the session Lewis Hamilton was fastest by almost 3 tenths of a second over team mate Rosberg, although the times were soon tumbling as the Williams of Felipe Massa and then Rosberg improved on subsequent laps.

With just under 6 minutes left in the session Hamilton finally responded as he swept to the top again with a 1m25.363, 0.130 of a second quicker than Rosberg. With the final minutes approaching those outside the top 10 were all switching to the softer medium compound tyres for their final runs, hoping their laps would be enough to progress to Q2.

The fight to survive was intense and once the chequered flag flew, and all the times had been completed, it was the two Lotus-Renault's, Caterham's and Marussia's that had been eliminated. This high speed and heaving braking track was always going to be tough for the Lotus-Renault team and their struggles from Free Practice continued as both Pastor Maldonado and Romain Grosjean were eliminated for the first time since the opening Australian Grand Prix in 17th and 18th respectively.

Next up was the returning Kamui Kobayashi for Caterham, who performed brilliantly in the circumstances as he fights to remain in F1 with a team that seem to be wanting to replace him with the likes of Andre Lotterer in Belgium and now Roberto Merhi for the rest of the season. 20th and 21st for the two Marussia drivers Jules Bianchi and Max Chilton is an average result for them with the hapless Marcus Ericsson again holding up the rear in 22nd. 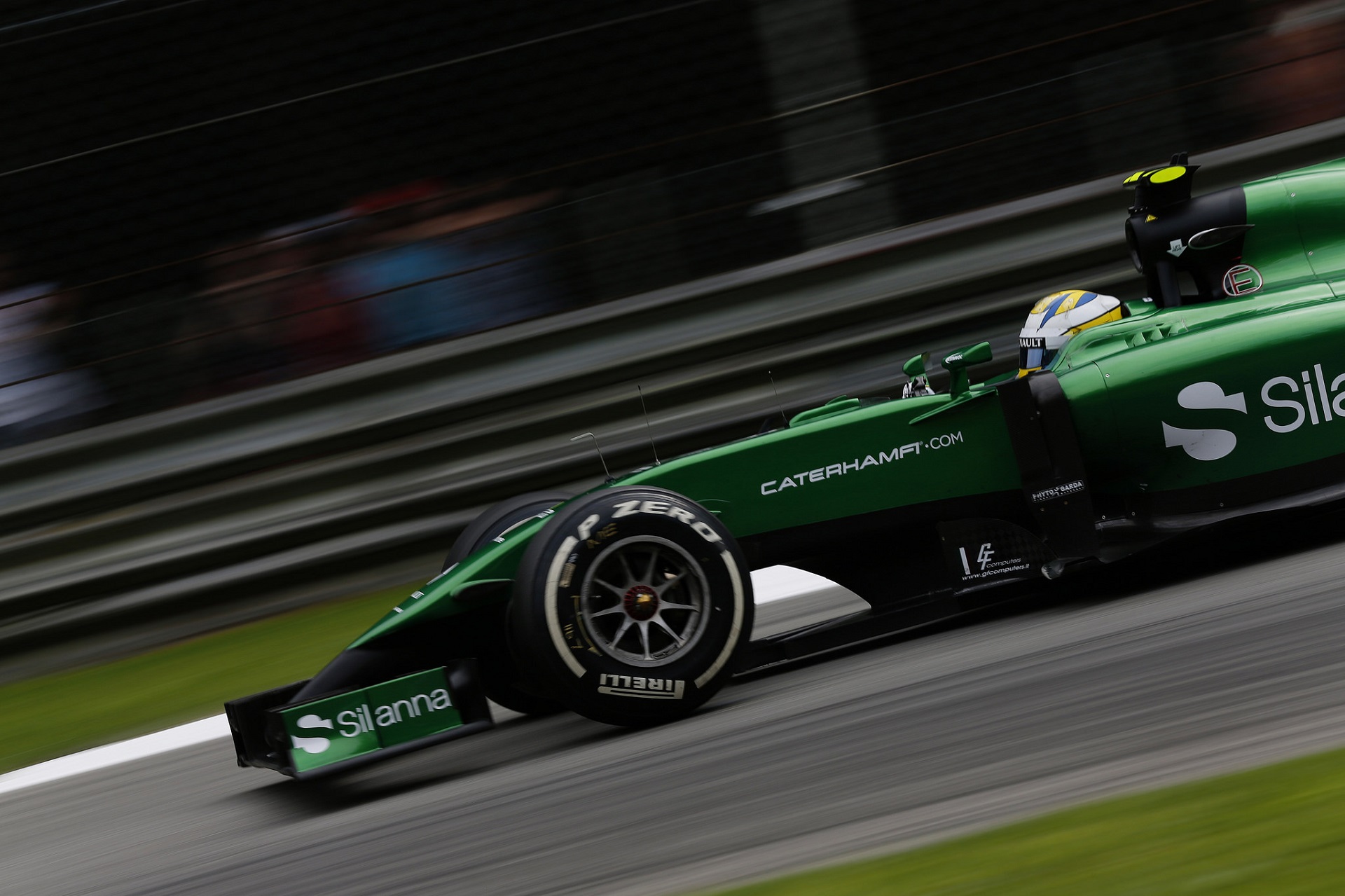 Q2 started with some initial fast laps from the likes of Nico Hulkenberg in his Sahara-Force India the gauntlet was soon set by Rosberg, who was making longer qualifying runs than his rivals, probably to gain track knowledge after missing a huge portion of the morning's final practice session. He set an impressive 1m24.682 lap, with the Williams of Valtteri Bottas only 0.2 seconds back.

Hamilton soon set his marker as he grabbed the top spot on his first Q2 lap with a 1m24.560, 0.1 seconds quicker than Rosberg, with the dominance of Mercedes being perfectly highlighted as the first non Mercedes powered car in Q2 was the Ferrari of Fernando Alonso, very close to a second back on this ultimate power circuit.

The final minutes produced their usually flurry of fast laps, although in this session very few were able to improved, with the only significant improvement coming from the McLaren rookie Kevin Magnussen who hauled himself into Q3 with his final lap. Those eliminated in Q2 were Scuderia Toro Rosso rookie Daniil Kvyat in 11th , but after falling foul of the engine change rulings for 2014 he will drop to 21st for tomorrow's race. Kimi Raikkonen will be hugely disappointed with 12th for Ferrari. 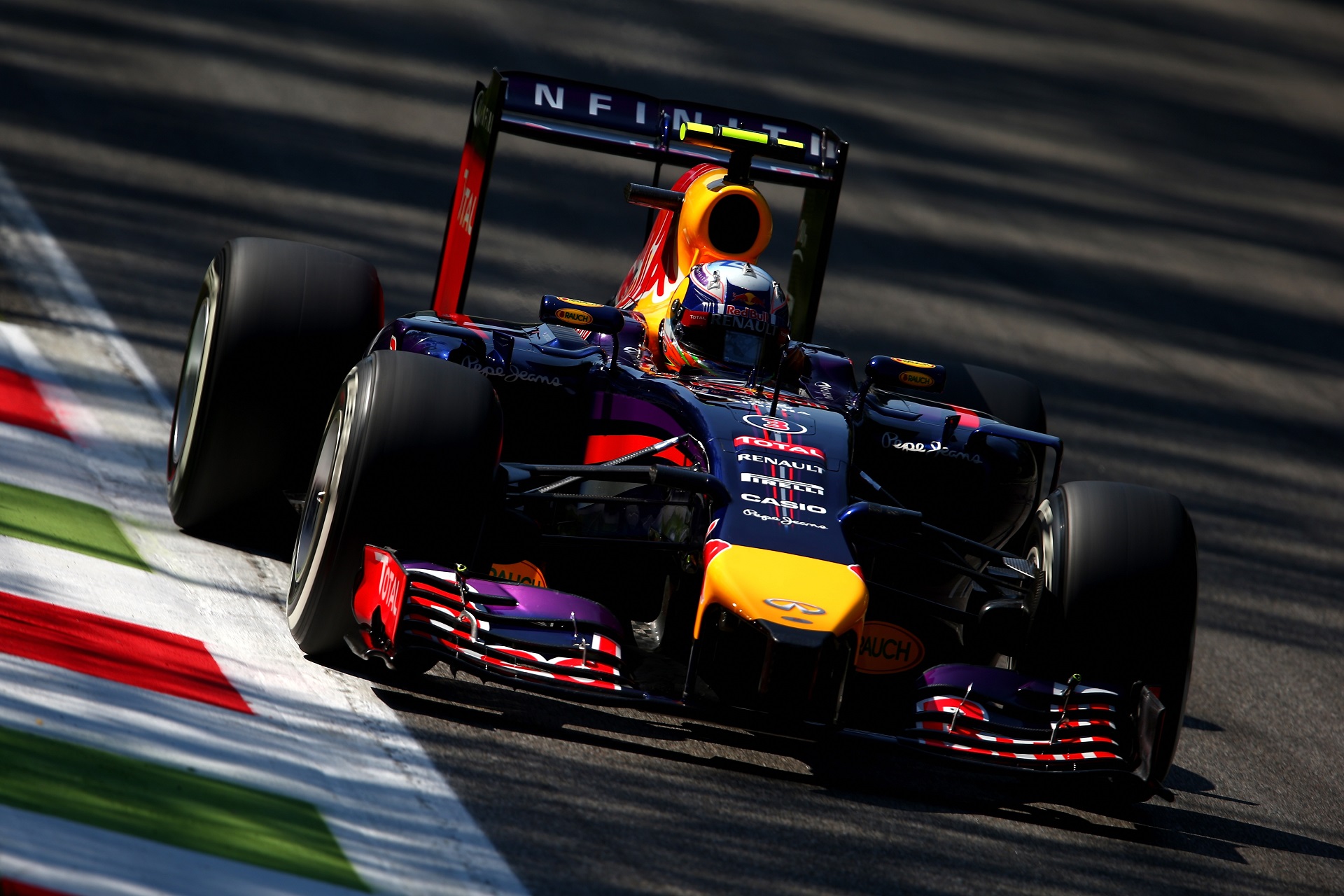 Q3 began slowly with the only car circulating being the second Sahara Force-India of Sergio Perez, with the rest only trundling out with around 9 minutes left of the session. Perez set a slow first timed lap in the low 1m26 bracket, before Rosberg set a more representative pace with a scorching 1m24.552 laps to assert him on provisional pole.

Whilst the two Williams drivers got close to Rosberg's time, it was Hamilton who soon set his own huge marker down for the weekend with a scintillating 1m24.109 lap, a full 0.443 seconds quicker than Rosberg, with some commentators even considering that Hamilton's best qualifying effort from the year so far. The quiet period in between the two runs in Q3 left plenty wondering how they were going to improve on their final runs.

This task would prove almost impossible as the long awaited final Q3 shoot-out for pole rather fired blanks this time as none of the top 4 were able to improve their times, leaving a delighted Hamilton on pole from AMG Mercedes team mate Nico Rosberg. The second row will be shared by the two Williams of Valtteri Bottas and Felipe Massa. The symmetry continued with the two McLaren occupying row 3 with Magnussen besting experienced team mate Jenson Button.

The first non Mercedes powered car on the grid is the warrior Fernando Alonso in 7th for Ferrari, with reigning champion Sebastien Vettel wringing the neck of his Red Bull to claim 8th. The final row consists of2014 F1 breakout star Daniel Ricciardo in 9th from Sergio Perez in 19th for Sahara Force-India.

This qualifying session has perfectly set up what should be a thrilling Italian Grand Prix tomorrow, although the fight into the first corner for the two AMG Mercedes cars will be somewhat less intense tomorrow, expect this race to be decided on track in the latter stages as the one stop norm at Monza leaves little room for strategy manoeuvre, the fans will be expected the late dice for the victory here they were promised before the dramatic early events of the Belgian Grand Prix. 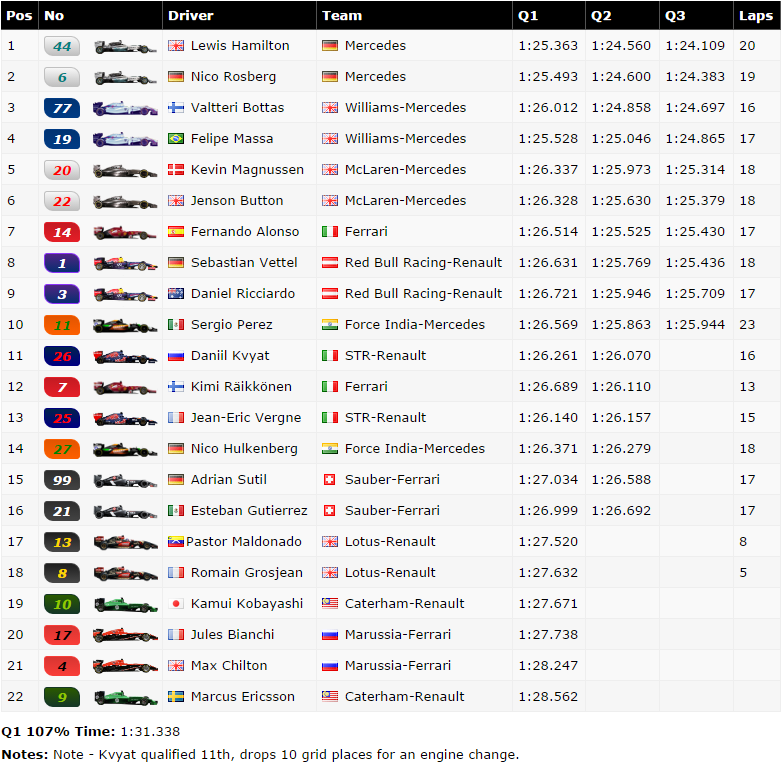