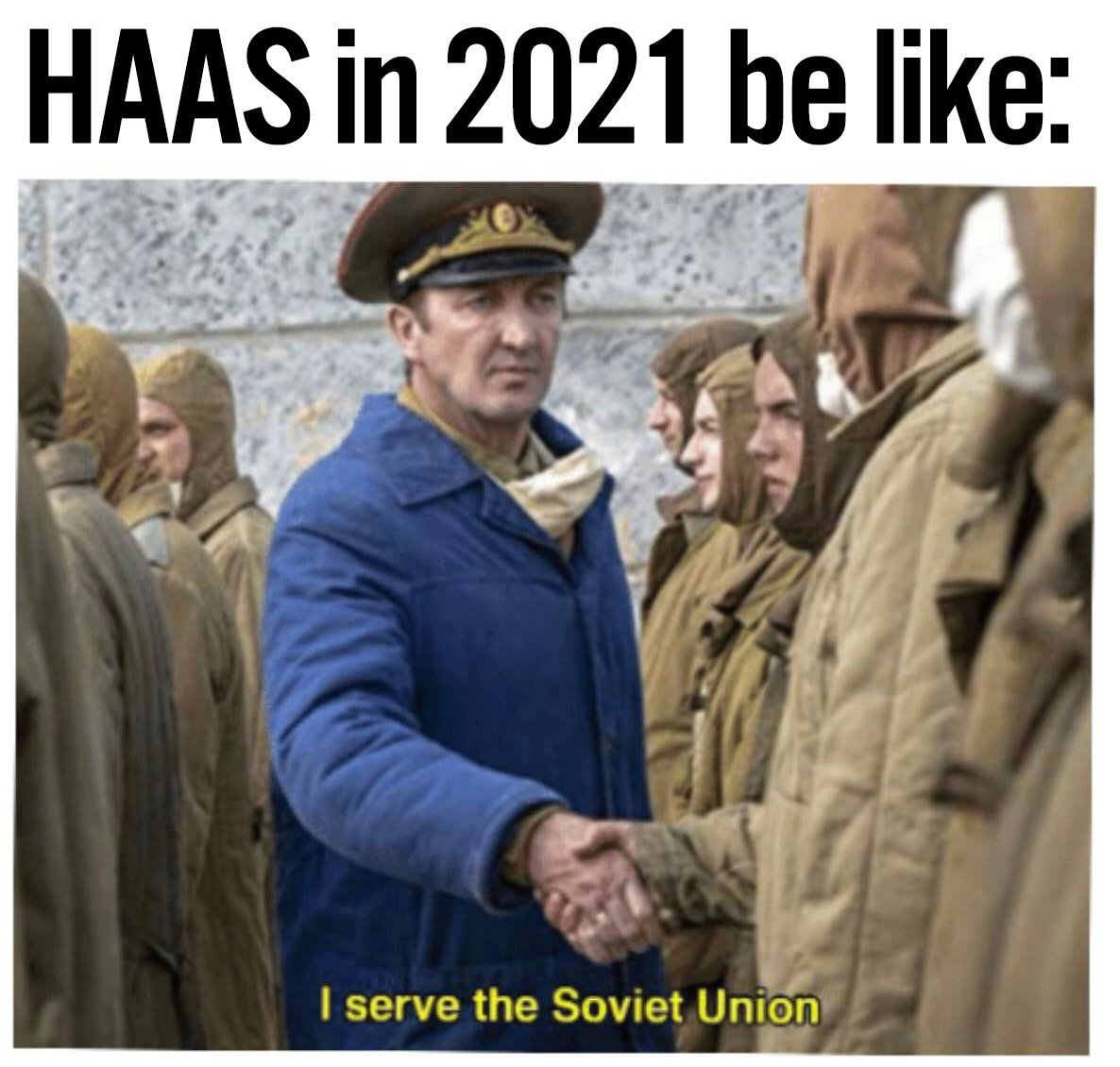 sergheo said:
American team in the colors of the Russian flag)))
Click to expand...

I hadn't thought about that.
It is ironic as you've already stated.
I do actually like the look in a weird and strange way.
Kind of a 'minimalist' approach.

Pappa_G_27 said:
If you ignore the Russian flag issues this is actually a fantastic livery. Some old school vibes with the diagonal block colours and that number placement... Mint!!!

This and the Alpine I think are the standouts. I don't mind the Aaron Martin livery either.
Click to expand...

I didn't think of Russia.. Clever livery I guess...
For me it looks very similar to a Williams Martini livery to be honest. And I like it!

Davide Nativo said:
Something I don't get: if the doping investigation came about in 2014, and the ban for Russia to have national athletes compete under their country flag would last 2 years from then, why is it still being enforced?
Click to expand...

This is the ultimate irony, US F1 car in Russian livery and colors.
I’d say instead of a bad thing, it should be seen as something positive.

There was a short window when we were able to set aside differences and work together in space, curb the nuclear arms race and even work together for global stability. Now we are back to polarization, demonizing and primitive tribalism. Sad, but true.

...not that I care for billionaires like Mazepin, regardless where their passport was issued.

Sorry mods, I’ll go back to chores in the garden - much better for my mood.

I think it's funny that they bothered to come up with a completely new livery for a car that they aren't bothering to upgrade all year. Something about putting lipstick on a pig? Have to please the Russian overlords, I suppose.
K

All they would have to do would be to switch the order of the colours: put the red on top of the blue. It would look great and there would be no reference to the Russian flag.

Yesterday, on Twitter, Gunther Steiner wrote that it was "just a f**king livery!"

Haven't considered them a truly American team at any time. Zero American drivers ever, Italian mechanicals, and now flying the Russian flag with pride. Not sure why they insist on keeping the "American" tag... not like there's the slightest shred of respect for Americans in F1, why not just be proud of who and what you are, which is clearly NOT American other than in the home address of the owner. To myself and the Americans I know, we don't have any national loyalty to this bunch whatsoever. Sincerely wish Haas had never raised my hopes, wish they'd just go away now. Let the Haas clown show of inevitable ineptitude fly the Russian flag with pride.

the best haas design since their start
H 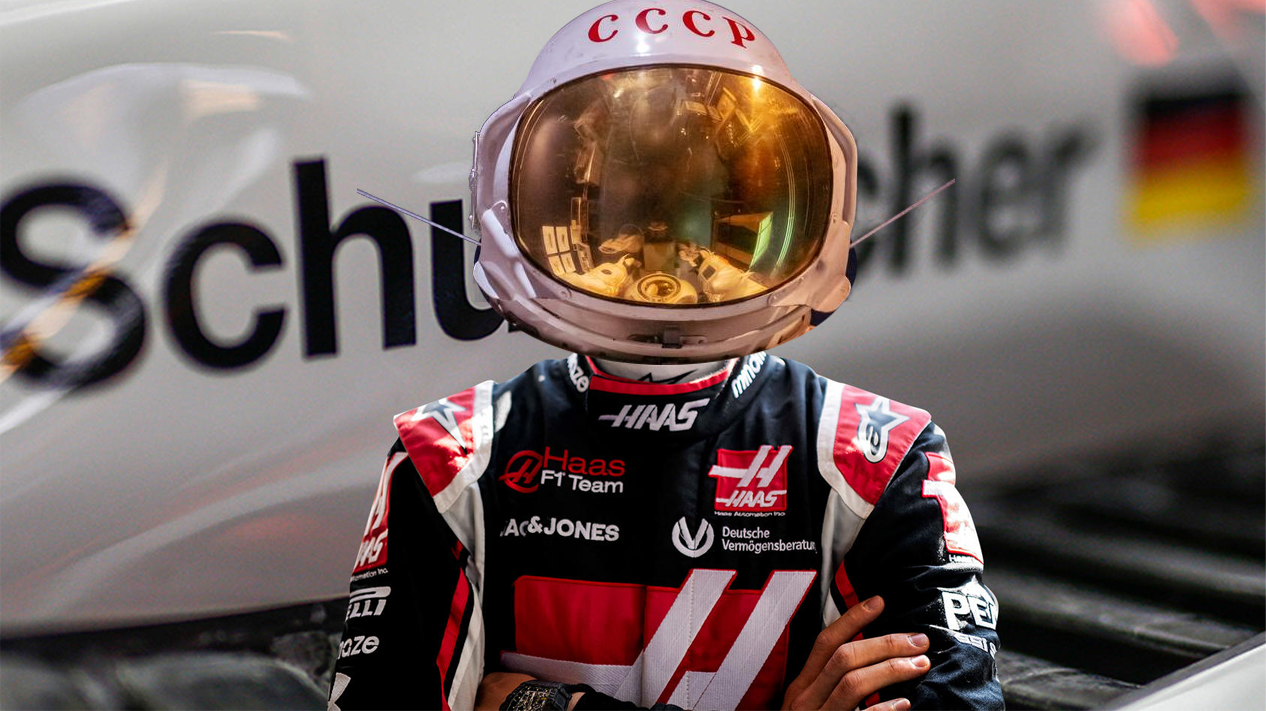 sergheo said:
American team in the colors of the Russian flag)))
Click to expand...

except this is not a russian flag

Not a bad... however the big Haas tag ruins it!!

EZWriter said:
To myself and the Americans I know, we don't have any national loyalty to this bunch whatsoever.
Click to expand...

As a fellow American, I'm inclined to agree. No idea how many at their shop are actually Americans, but I can guess it's roughly half, not counting boss Gene. Quite frankly, I could care less about this team. Their NASCAR team does so much better there than the F1 team does last I checked (I stopped watching NASCAR last year for the record). I feel no national connection with these people whatsoever, only disappointment in how they seem to treat the F1 team as a side hobby. Imagine the morale of the people that actually work there.

As for the livery, remember when I said in the topic about the new unfinished oceanic Williams livery that that one wasn't lazy? Trust me: this one is. The Russian tri-color on three different spots on each side of the car and on the nose, and nothing else but a blank skin? Seriously? Granted their logo doesn't inspire much for ideas, but the team has done better with their liveries in the past, so not much for excuses here.

Lastly, just read that the FIA says the ban doesn't apply here, but doesn't say much else. Can't blame boss Gene for this; his hands are tied as far as what sponsors want for colors. And since Uralkali is sponsoring Nikita, Haas didn't have much for options. It's not like there's a line of representatives for other companies at Haas F1 headquarters, right? Gunther's not in charge, nor is he concerned with politics. Same with Mick, though his comments on the whole thing strike me as if he knows he won't be there more than a season or two. Maybe he'll take Gunther with him to the land of red horses? One can dream.

If anyone is to blame for the arrangement, its Uralkali themselves. Papa Maezpin must have known about the loophole in the ban that doesn't extend to sponsorship/livery colors, so there is no way he can claim ignorance. They could have chosen any color arrangement, but they went with this. They knew this would p!ss people off, and it has, generating attention of many kinds in a car that has little to no hope of winning even if each Mercedes (both black and teal) and all four bulls wreck or go up in smoke, to say nothing about Ferrari(sadly), McLaren, or Alpine. Ultimately, this has got to be putting Uralkali in a positive light...but only in Russia; which may be all they care about.

Eric Bischoff seems to be right: controversy does create cash.

Must be comforting for those stuck in Cold War v1.0 to go straight into Cold War v2.0...

...will keep the geopolitical comments out of RD, but I’ll be honest and blunt, I fear the US and its five eyes + extra partners more than I do Russia or China. Tribalism is an stupid trait.

Last from me in this thread.

Would have liked to see them keep there colours. Many of the other teams stay with there own colours just changing the design every so often. Makes it easier to distinguish who is who.

Not only just that, It's an American team which is based in the UK, has Russian livery and driver, also has a German driver and has an Italian power unit. The irony levels are HUGE.
D

fotpap said:
Not only just that, It's an American team which is based in the UK, has Russian livery and driver, also has a German driver and has an Italian power unit. The irony levels are HUGE.
Click to expand...

Haas has done squat to build an American support base. Most of their brand-awareness comes from Americans watching Drive to Survive and saying "that profane German Italian is hilarious." "America's F1 team" will be the one that invests in developing American drivers. When a promising American junior like Logan Sargent has to give it up, there's a problem.

Where is this thread going?
Weren't lots of folks saying to "keep politics out of sport" when LH started talking about Breonna Taylor?
The reaction to this Russian-themed livery and the team's American beginnings really seem to have struck a nerve for some.
Relax folks!...this is just motorsport and a car livery.
While it is okay to see the irony...don't go making a bigger deal about it than it needs to be.
Mercedes is a German team based in the UK and with a British and Finnish driver.
Nobody is mad about that.