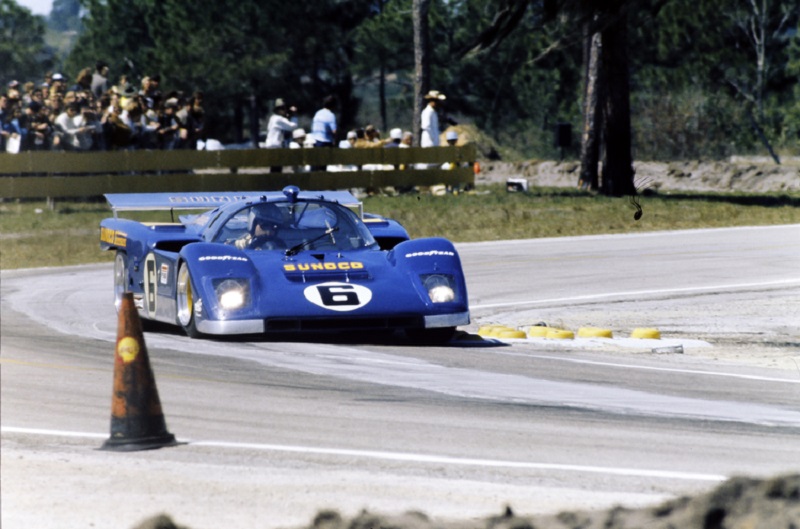 The motorsport history is full of iconic cars. Legendary vehicles that stood out against the competition, due to their technology or the ability of their drivers to drive them insanely fast. Sometimes, both. One of these icons is certainly the metallic blue Penske/Sunoco Ferrari 512M, driven by Mark Donohue and David Hobbs.

This extremely beautiful car was Roger Penske’s weapon for a win the 1971 ‘International Championship for Makes’. Penske was renowned for his peculiar strategy when it came to prepare for a specific challenge. He would buy the fastest model available for sale in that series, bring it home, strip it, examine it, and then improve it. Everything, and I mean literally everything, would undergo serious modifications. Chassis, suspensions, transmission, drivetrain, gearbox, electric wirings and electronics, bodywork, brakes, etcetera. Sometimes adapting past knowledge gained through racing everywhere there was a starting grid, sometimes replicating opponents’ solutions onto their car.

Of course, the engine was also one of the first part to be looked after. For that, Roger Penske would rely on TRACO (from the founders’ names Jim Travers & Frank Coon). TRACO was known for being able to work magic on any engine, squeezing out every drop of power available in them. Former office manager Kirby Guyer described Travers and Coon as being complete opposites, but when together at work they could perform miracles[1].

They put their expertise at work even on the 5 litres Ferrari engine that Penske received together with the car, and according to Mark Donohue they were able to take it up to 630 horsepower[2], which is astounding considering that the factory engines were capable, on average, of delivering 590-600hp @ 8000-8200 rpm. 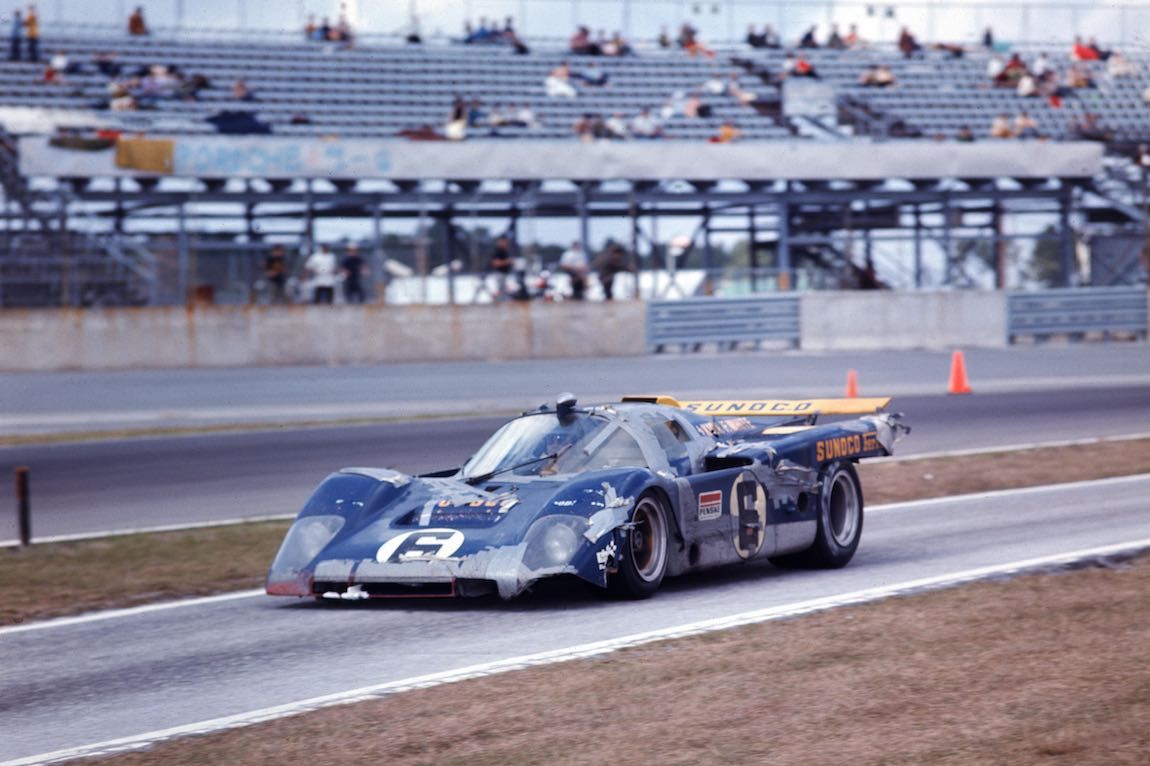 The Kirk White sponsored vehicle, thanks to that and other extensive improvements the car received all around, was able to clock fastest time and set pole whenever it entered a race. That is, at the Daytona 24 Hours, the 6 Hours of Sebring and the 6 Hours of Watkins Glen. Going seconds faster not only compared to all of the other Ferrari 512s, but also to the Porsche 917s. The only time they did not manage to get on pole was at Le Mans, where the superior top speed achieved by the Porsche 917LHs left no chance to the American contender, locking up just fourth place behind them, on second row. Still, 2 tenths faster than the Martini 917K and the Escuderia Montjuich 512M, and 3 seconds quicker compared to the rest of the Group 4 field.

Unfortunately, the Penske/Sunoco 512M is remembered to be also one of the unluckiest car ever (possibly adding to its charm though), and it never actually finished a race. However, Porsche was so impressed by their efforts and the superiority shown by their car that the 512M was to be the stepping-stone into their partnership deal later in ‘71, which led sometime after to the birth of the legendary 917/30. The CanAm killer. 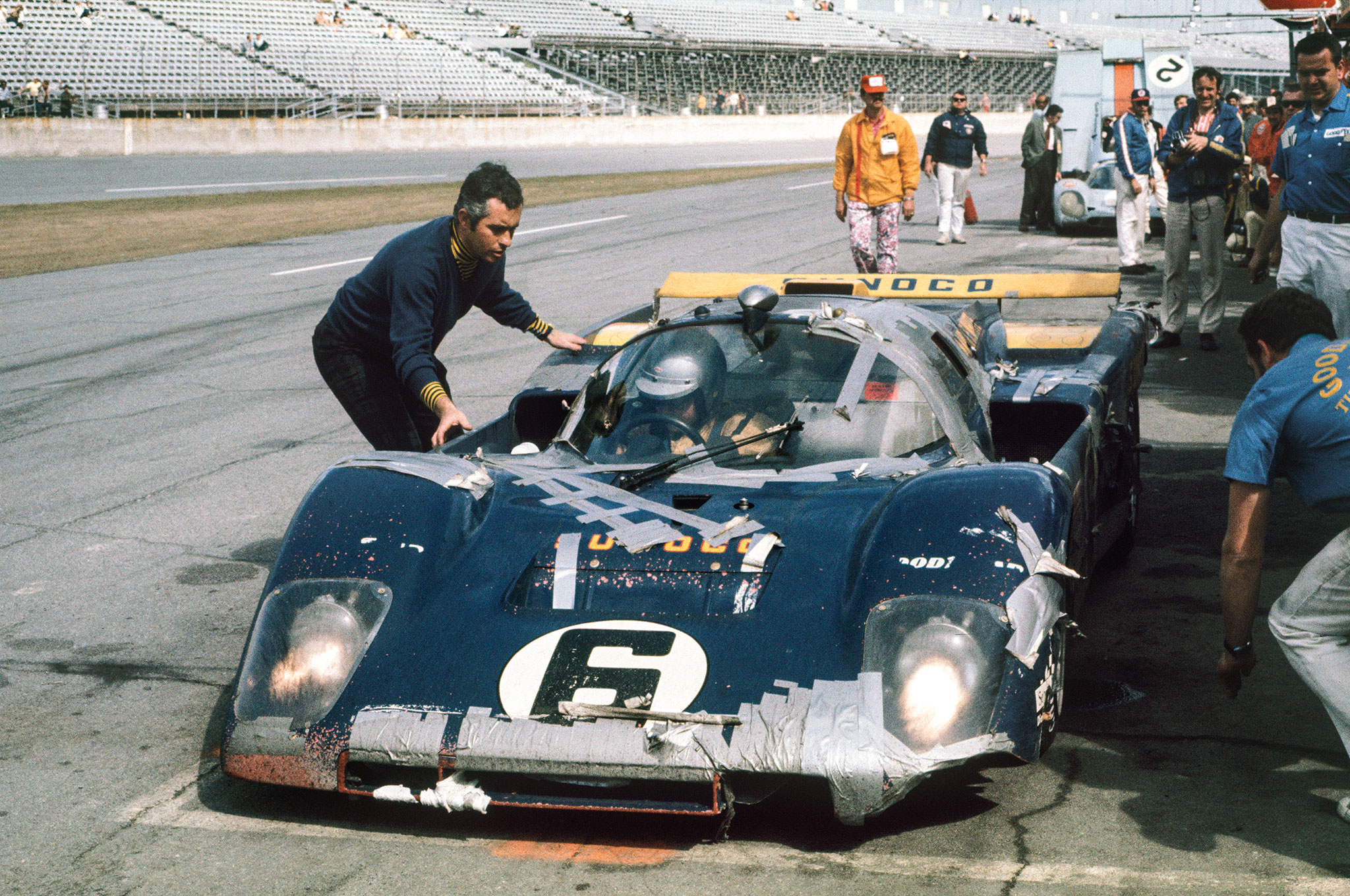 Back to Le Mans, there is a part of the story behind this car that is worth mentioning. As we said, the 512M clocked fourth time on the grid, but did not end the race. Reason why, a piece of dirt clogged an oil passage to the cam bearing, and the car was out. However, what interests us, is a curious case of engine switching and mixing that happened that year in the French venue.

The protagonists of this story are Donohue and Hobbs, the Penske drivers, and John 'Woody' Woodard, Penske chief mechanic. According to all of them, after Sebring Ferrari had sent a new engine to the team that was untouched by TRACO, which Donohue said to be capable of delivering 590 horsepower on the dyno[3]. TRACO did however rebuild their 630hp original unit, and sealed it as a spare. Now things get interesting. Hobbs and Woodard agree in saying that this new Ferrari unit was actually received in France, just prior to the race and after qualifying, and Penske outvoted the team in the decision whether to install it or not for the start. Donohue, grinning from ear to ear, found a very loud and rackety tow truck with a massive combo of four axles and sixteen wheels, comprised of a hook and crane.[4]. They installed the new engine, and put their TRACO aside. At this point, Ferrari men insisted to have the old TRACO engine for them. The Penske team was at first reluctant to give it away, not fully understanding the reason behind the Italian insistency. In the end however, they agreed after Donohue had tested the car with the new unit and everything seemed to be working fine.

Woodard says that the Italians took the engine away, never to be seen again[5]. Was it taken back to Maranello? To analyse what the TRACO specialists had done with it and steal their secrets?

Hobbs, instead, says[6] that the engine was taken to the NART garage, and installed on the Posey/Adamowicz car, which ended 3rd. Did the American Ferrari dealer tried to get Penske’s “unfair advantage” for himself, managing by doing so to score an unexpected podium? 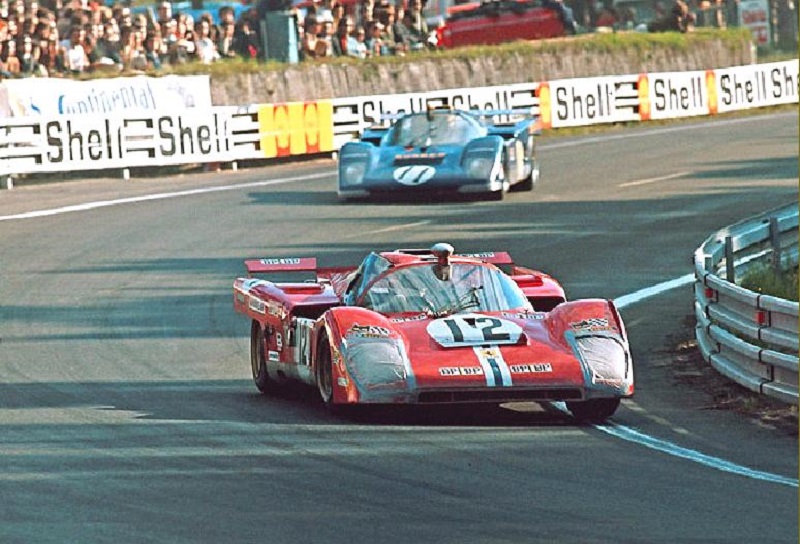 -The Penske/Sunoco 512M chasing the NART team Ferrari at Le Mans, 1971 - was Chinetti that day secretly running the TRACO engine taken from Penske?

What is interesting to consider however is that Donohue recalls a very different story. According to the driver-engineer, the Ferrari new unit was sent to Penske much before the race and installed on the car for the Le Mans weekend. However, since it was alarmingly rattling on the racetrack, Donohue decided to swap engines. This is where the story departs further. Donohue too says that the Ferrari went into surgery right before the start, but only to re-install their original TRACO engine, the one credited of 630hp, which did not suffer from any rattling but was very worn out by the previous races. The Ferrari new unit was put aside, until Filipinetti came begging for it. Donohue said that the engine was unstable, and would not last. Filipinetti insisted to have it nonetheless. Penske agreed. Alas, it did not last, and the third fastest Ferrari that day, was also retired. The race account from Motorsport magazine confirms this story, by saying[7]:

«The Donohue/Hobbs Ferrari engine seemed rather tight so the Penske team swopped from the factory-prepared motor to an American Traco-built example (after the qualifying session)».

In the end, everyone seems to tell a different story. Woodard and Hobbs are very similar in their versions, but Donohue’s is backed by Motorsport magazine, a trustworthy source.

Where did the TRACO engine really went? Did it make a trip down to Italy, and was analysed to find out its secrets? Did it blew on Penske or Filipinetti car, thus ending its life in France? Alternatively, did it manage to score its first and only result by getting the NART team to the podium?

Mysteries of the motorsport... 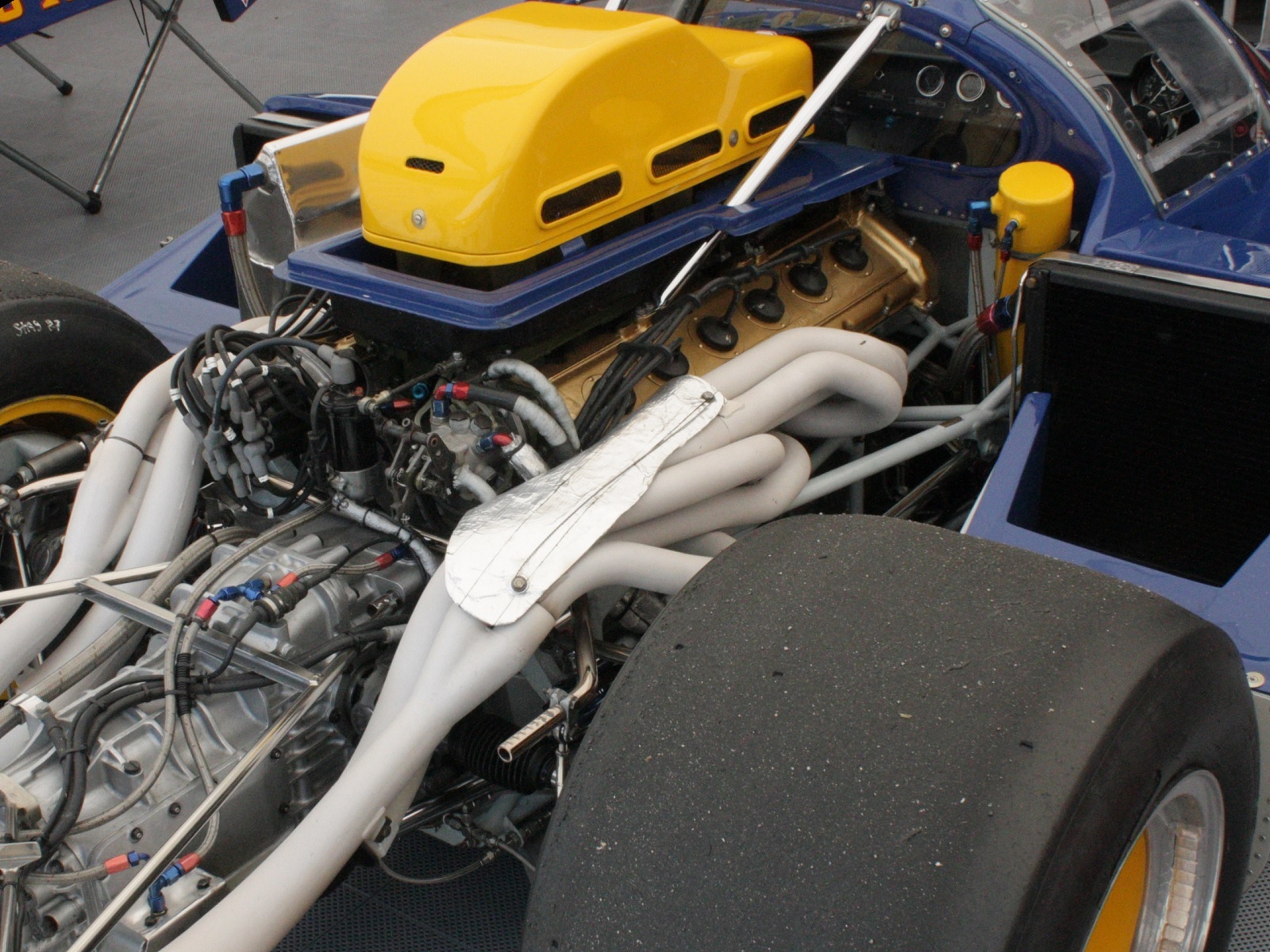 What do you believe? Was it all a dirty trick from Ferrari to get the engine for themselves or their American NART partners? Is Donohue right instead, and the Italians had nothing to do with this story, and the engine just went back inside the Penske car, if only to meet its definitive end? Do you have more evidence about this mystery?

Let us know in the comments below!

Columnist for RaceDepartment · From Italy
Petrolhead and Simracer, passionate since the cradle about cars, motorsports and simracing. I read a lot, and I love to share what I've learned with others!
Staff Premium

Great article. The Blue Penske 512m is one of my favourite liveried and looking cars of that Era. Almost as good as some of the 917 liveries.

Mark Donohue and Roger Penske are my all time favorite Driver/Owner team ... I read my copy of Unfair Advantage over and over until it was nearly worn out. It's been passed on to my youngest son.

I know getting ready for the little races I participated in was pretty hectic ... getting ready for LeMans must be CRAZY BUSY. Under those circumstances, I'm sure keeping track of one engine would be very difficult. Donohue was known by everyone as a thorough engineer and totally stand up guy, so I'm inclined to believe his story.

BTW ... I NEED to put 1/18 scale models of their T-70 Lola coupe and roadsters in my model collection, as well as the 512M, and would love to see both cars built for AC, in Penske Blue. I already have Mecom's Ferrari 250LM that Donohue and Hansgen drove at Sebring.

Anyone who drives through France on national or regional roads will stumble upon a major field with ancient cars, chances are high, many of these iconic events are still sitting out their retirement in a field, far from anybody.

Koen Verlinde said:
Anyone who drives through France on national or regional roads will stumble upon a major field with ancient cars, chances are high, many of these iconic events are still sitting out their retirement in a field, far from anybody.
Click to expand...

so I'm one of the most unluckiest guy in the country ! Living about 60 kms south of Paris, there are plenty of fields, a few barns and grain silos, but no iconic retired cars .

But, there are a few classic events hosted on the decommissioned racetrack of Linas-Monthléry (here or here) as well as Peter Auto's Classic events in various places (Le Mans Classic, Spa Classic, and many others)

Great story, we will never know what really happened to this engine

JusTiCe8 said:
so I'm one of the most unluckiest guy in the country ! Living about 60 kms south of Paris, there are plenty of fields, a few barns and grain silos, but no iconic retired cars .

But, there are a few classic events hosted on the decommissioned racetrack of Linas-Monthléry (here or here) as well as Peter Auto's Classic events in various places (Le Mans Classic, Spa Classic, and many others)

Great story, we will never know what really happened to this engine
Click to expand...

Then I really do feel for you.

We have a Problem! No... we have ducktape

Good for covering all the quacks!

Grazie Davide, great story! I enjoyed reading it as if it was a mistery novel.
Keep 'em coming!
R

Daytona was a bodywork eater, the 917s all have similar amounts of tape. Most real endurance events end up like that even now

Interesting story! would be great if anyone else stepped forward one day to give some more background...

That should have been in bold italics to add some presence to it!

I like this car on Forza 7. Quite fun to drive if you drop the homologation shenanigans and reset it to stock.
You must log in or register to reply here.