The GPTCC is back for more!

RULES: (any changes from season 2 will be in red)

- If you're interested in joining the series please post it in the thread. What I need from you is:
Driver name (can be fictional, you don't have to use your real name)
Nationality
Driver number (make sure it's not used! Look in the money tables to see which numbers are free)
Prefered Team (where you'd like to drive. The team needs to have an empty place though. If you want to start a new team, which you are only allowed if there is a team slot left, I need your team name again, aswell as team nationality. There are no team managers, so you have to drive for it.)
Sponsors (for both qualifying and race)
OPTIONAL: Team livery (can use the default one from the DTM 2005-06 mods); driver helmet.

If there is a spot available you'll be added the series at the start of the following race weekend, if not you'll be added to the waiting list and contacted once a seat becomes available.
--
If you want to pair with someone in a team, please tell me 2 of your team colors, along with team name and nationality.

b) All participants are expected to stay active. If a driver remains inactive for 2 weekly events in a row they will lose their seat, regardless of whether there are people waiting to join or not.

c) It is every participants responsibility to read the rules. Not having read the rules is not a viable excuse in disagreements. If you complain without reading the rules you are risking of losing your seat.

d) The GPTCC reserves the right to deny entry without explanation. 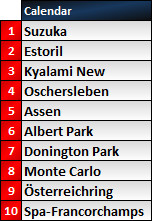 a) Each race weekend will feature 2 free practice sessions and a single qualifying session, all with a time limit of 30 minutes.

b) The racing will be split into three separate events, lasting between 15-30 minutes (~30% race distance) approximately.

*Retirements will also be getting points

e) In the event of the occurrence of a game breaking bug - i.e. pitstop bug, drivers running out of fuel - the race results will be taken from an appropriate time, usually one lap prior to the bugs appearance. However if less then 75% race distance has been completely the results will be declared null and void

c) All new drivers entering the series will start with 1000$ to spend, and an extra 25$ for every race they missed.

d) Drivers will not be able to purchase upgrades in between sessions. You will be notified when the market opens and closes. The moderator will tag you if you have not made your purchases before the market closure

g) Drivers can carry over a maximum of 2000$ from one season to the next. Anything extra you have will go to your bank account.

h) Drivers are able to buy the following upgrades: 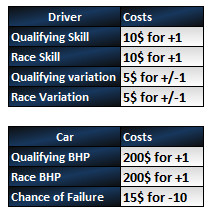 d) After the result of the first race session of the season has been posted, drivers will only be allowed to change their sponsor if they pay the amount of money you gain if you achieve that sponsor objective. (ex. B->D on race costs 100$). You can only change 1 quali or race sponsor during the season, NOT both.

b) Drivers are allowed to design and use their own helmets, please use the shape found here:http://www.mediafire.com/download/rtodu744fhh41di/Arai GP-5 RC 2008.rar
If you don't send a helmet, I will use the default helmet!

c) Likewise drivers are free to design there own cars, all the available car templates can be found here:http://www.mediafire.com/download/iagska579z762fl/templates (3).zip
Also, the cockpit textures for Opel and both Audi cars only, which is a separate file. Not necessary to modify, you can leave the original Vodafone one too
http://www.mediafire.com/download/5cjpgb4djfx93dx/Cockpit Opel and Audi cars.rar

e) Liveries must be sent in TGA or TEX format, in any other format the livery will be considered not sent, and I will use a placeholder livery instead (check rule 5g). If you have a good reason behind it, then tell me.

f) Drivers are allowed to chose their own personal numbers from between 0 and 99, with #1 being reserved for the series champion

Tell me if you are going to rejoin for season 3 Also select a track you would like to race on in S3. The new calendar will be decided by everyone saying their favourite track, and the tracks going into a random.org draw. The top 9 gets the first 9 track spots, while 10th race always remains Spa-Francorchamps.
Don't worry if someone already selected the track you want. Duplicates mean there is a higher chance that the track will be selected.
Also should be noted that there will not be 2 races on the same track, or in the same country!

Edit: is the BIG nordschleife avaible?

Well, for those who don't want to read the entire rules:
The base perfs will change to 670,670,2000 for car, and 16000,200,16000,200 for driver. This is to hopefully avoid the pole variation being ridiculously high by making skill less important.
If you joined mid-season, now you'll only be getting 25$ for every race missed, compared to last season's 50$.
The sponsors are slightly altered, the improve on last result gives more, while the win/pole ones are now also juicier, giving you lots of cash if your risk pays off.
DNF's get both points and cash.
Also select a track you would like to see a season 3 race at
--
Apex Racing is back, and I select Montreal
@Millsy24
Last edited: Jan 12, 2015

Forza Turismo is in! How about new tracks, and a home race for me?

Rami Saidy said:
Forza Turismo is in! How about new tracks, and a home race for me?
Click to expand...

Silverstone? But I think you mean a track from Lebanon

I don't know if Lebanon has any racing tracks, and if it does, I am not 100% sure if it was made for GP4. Maybe you can select a fantasy track and we can pretend it's the Race of Lebanon
But don't forget if you select a track there is only a chance it will make it to the calendar
M

Milos Ancevski said:
Silverstone? But I think you mean a track from Lebanon

I don't know if Lebanon has any racing tracks, and if it does, I am not 100% sure if it was made for GP4. Maybe you can select a fantasy track and we can pretend it's the Race of Lebanon
Click to expand...

Yes of course I meant Lebanon If we do use a fantasy track, at least give it a realistic name and layout, not like Seven Hills in rFactor

Is there a track list somewhere so we can see which tracks are avaible?

Edit: Mr. Ancevski, an "agree" rating isnt helpful at all

Rami Saidy said:
Yes of course I meant Lebanon If we do use a fantasy track, at least give it a realistic name and layout, not like Seven Hills in rFactor
Click to expand...

I guess find a fantasy track for GP4, and select it

Benutzername said:
Is there a track list somewhere so we can see which tracks are avaible?
Click to expand...

I did try to find it from Jack's old poll, but I can't find the poll :/ This is all I found so far
http://www.simracingworld.com/files/1-grand-prix-4/4/?Sort=Date&Sort2=Desc&LimitGame=&Page=1
http://www.grandprix4.org/circuits.php?lang=en
http://www.gp4central.com/tracks/
--
Maybe @kedy89 knows a link to a proper list?

Actually I just agreed because I want to know too

2KF1 will return, confirm #4 Keranen entry, awaiting confirmation of #95 @James McNamara entry.
need to know how long before the season starts as to how much I change the livery on the car.
Albert Park is a good idea, though please don't make it so late in the season
D

Team Hybrid will also confirm their entry for the third season, but will enter under the name "Team Haiburiddo".

"hybrid" in Japanese
I prefer a Japanese display name for the team
@Diehl want to be my teammate for another season?

23th Jan eve (for you 24th Jan morning). Because hey, I want to have loads of seasons so GPTCC can have the "Drivers that remained from race 1 season 1" wiki page

You'll have to hope and pray for random.org to pick Albert Park earlier mate

needforspeedgamer said:
Team Hybrid will also confirm their entry for the third season, but will enter under the name "Team Haiburiddo".

"hybrid" in Japanese
I prefer a Japanese display name for the team
Click to expand...

That is fine by me

Definitely missing the Ovals, maybe some more that were released in the meantime, Watkins Glen for example. Termas Rio Hondo should have been released a few days ago.

if we can't use the full Nordschleife, we shouldn't bother with Nurb at all, the Kleine was a bit crap.

No idea about liveries yet though or buys.

Market will be open with I update the budgets (probably in 2 days, maybe later today)
K

Still wip. The one called Brinds Hitch in the list is kind of a beta of the Indy layout.

kedy89 said:
Still wip. The one called Brinds Hitch in the list is kind of a beta of the Indy layout.
Click to expand...

What British circuits have been made?


What British circuits have been made?
Click to expand...