Very fun race indeed ! When I've seen everybody on the top running out of fuel I said to myself Oh my god, Gilles you can actually win this one !! Then I just saw him, motionless, on the side of the track 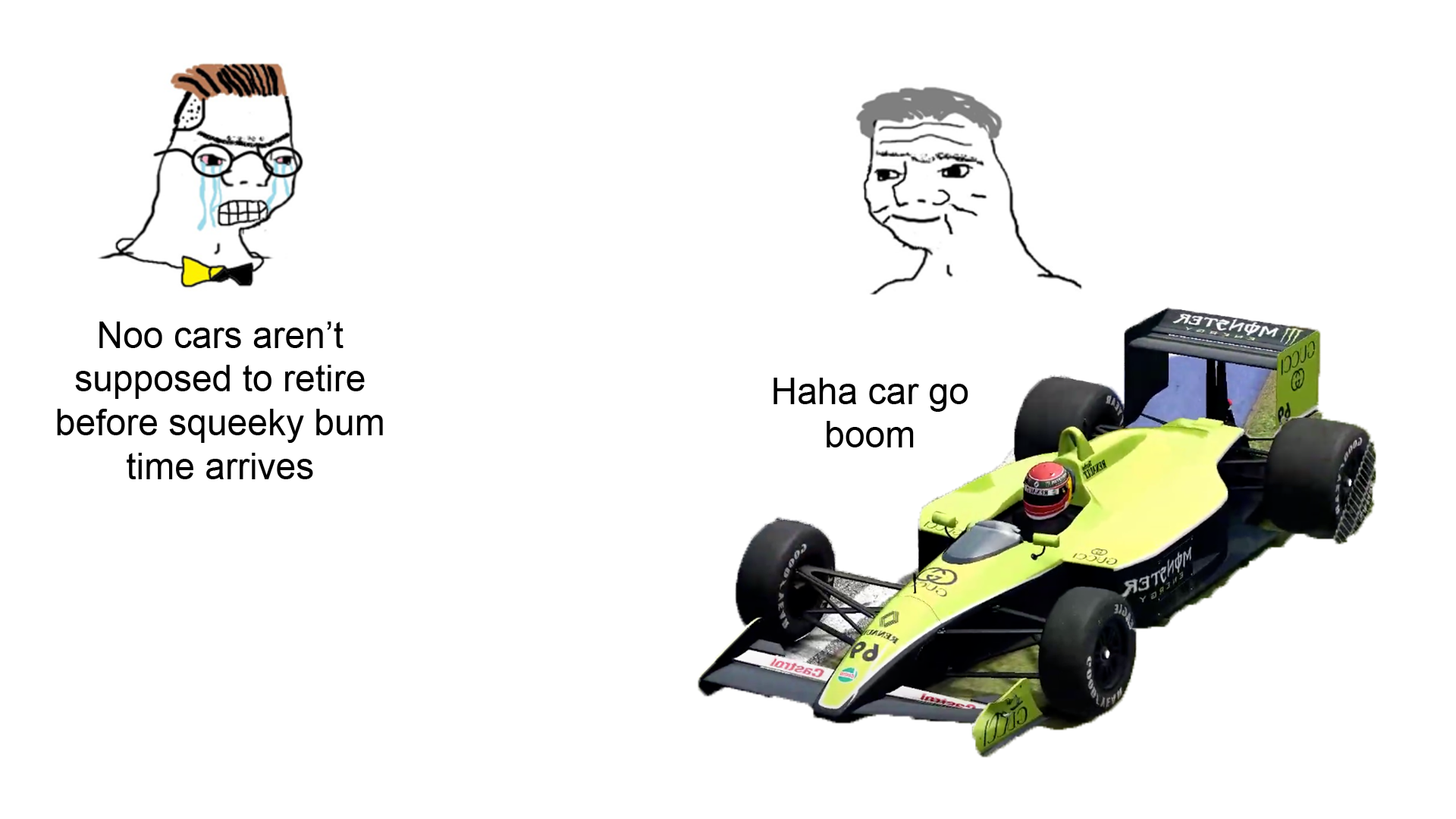 you scored points, surely you should be happy? 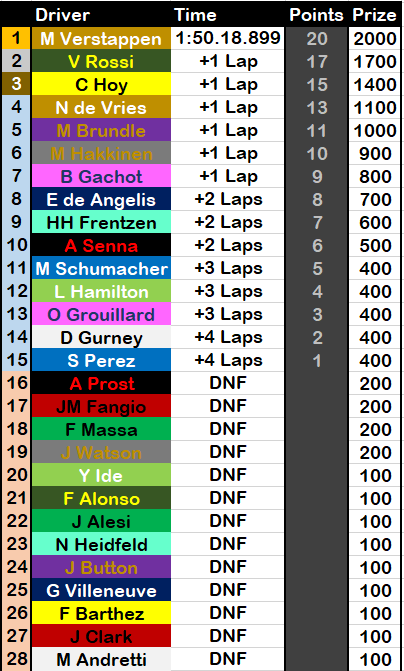 The two championships entering the Australian Grand Prix were closer than anyone could imagine, leading to the round supposed to be a perfect set up for the final race of the season, but three drivers simultaneously not paying attention to their fuel gauges threw that all out of the window. Fabien Barthez and Jenson Button, both joint second in the championship, fought spectaculrly for the lead at the beginning of the race, while leader Verstappen struggled to recover from 8th. However, Button and Berthez, along with Villeneuve, all ran out of fuel trying to go a lap longer than their tanks could manage. Now, all Verstappen needed to do was survive the remaining 46 brutal laps and finish 1st or 2nd and he would be champion. As it transpired, the race was utterly chaotic, as more big name drivers kept crashing out, blowing up or losing plenty of time after colliding with backmarkers. In the end, verstappen lapped the field, securing victory ahead of Rossi and Hoy. Mika Hakkinen was cruelly denied a home podium for 2KF1 with a few laps to go as his front wing went missing. Star of the race was bertrand Gachot, finishing 7th as Polestar Performance scored double points in only their second race. 15 drivers finished as 13 retired, leading to this being the most attritional race in GFA ever.

MARKET IS OPEN
Spend all your money, as only money won in the Automobilista Grand Prix can be converted into reliability for next season. Once the lights go out at the start of the race, your bank accounts are all reset to 0, so don't waste anything.

Interviews
@Lesley Buurlage, max drove brilliantly and took home the title a race early. How proud of your man are you, and can the team make it a double with the constructors title?
@Jimlaad43 The Constructors title is still possible, how realistic do you think your chances are?
@ME9Swe An incredible result from Gachot, did you ever expect such a strong drive this late in the season?

Global Formula Automobilista Awards
A quick little awards vote I would like you all to fill in. The results of this survey will be revealed during the broadcast of the Automobilista Grand Prix, so get your votes in before Sunday please. Obviously, please try to avoid voting for yourself if possible.

Jimlaad43 said:
Interviews
@Lesley Buurlage, max drove brilliantly and took home the title a race early. How proud of your man are you, and can the team make it a double with the constructors title?
Click to expand...

The constructors title has been the main goal from the very beginning and the drivers championship was just a sidequest. That Max now, due to unfortune from others, has been able to rack it up with 1 race in hand is a huge positive and relieves some of the pressure. Now all the boys have to do is continue what they've been doing all season: bringing the car home in the points. We have the edge over DTK but it's far from over.

I'm not spending any money. This year has taught me this thing called reliability? Is that what's its called

Kas. said:
I'm not spending any money. This year has taught me this thing called reliability? Is that what's its called
Click to expand...

Well then you're wasting it, because you lose any money you don't spend before this round

Jimlaad43 said:
Well then you're wasting it, because you lose any money you don't spend before this round
Click to expand...

Comparing these images. I either spend money for the next race so Ide wont break down next race or next season? Or not come last again. Hmmm

Kas. said:
Comparing these images. I either spend money for the next race so Ide wont break down next race or next season? Or not come last again. Hmmm
Click to expand...

this is not real life motorsport, there's no point focussing on next season to gain an edge on the rest. your best option is to spend the money you currently have on improving the cars reliability so you have a bigger chance on a better result in the next race, which has the potential to give you a small reliability boost for next season. not spending anything and keeping the situation as it currently is would be the worst choice you can make

Jimlaad43 said:
@Jimlaad43 The Constructors title is still possible, how realistic do you think your chances are?
Click to expand...

I need to outscore NLE by 24 points, it's going to be tough, but doable. We will need some unluckiness to strike NLE, but in this series anything is possible. Let's see if the Yellow bois can do it.

It's coming to the last race of the season. If anyone wants to join the commentary box for a last-race banterfest, send me a message and we can work it out. If we can try to get an FFG style full box on the last one of the season, that would be epic. 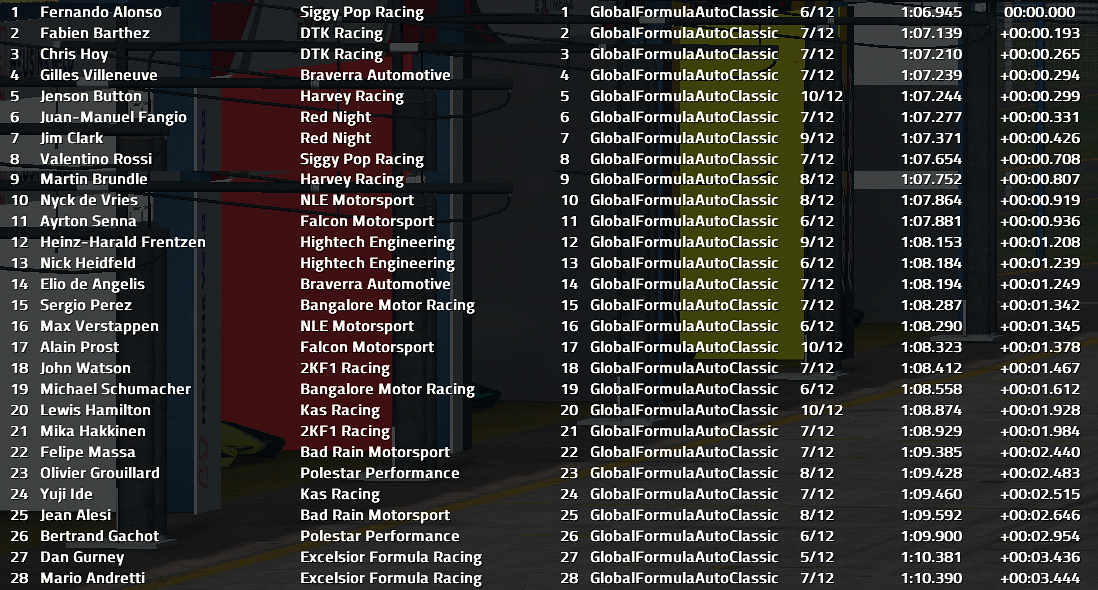 Fernando Alonso plonked his car on pole for the last race of the season ahead of the DTKs, as championship leaders NLE ended up 10th with de Vries, and newly anointed champion Verstappen down in 16th.


The race is being uploaded and will be posted below. The Global Formula Automobilista awards are announced at various points throughout the race, so watch it all to find out what wins each of the awards voted for last week.

not in the way we wanted, but the mission has been accomplished

Top3 start for non-top3 team does it again. Sad for our opponents in green. We were expecting close race to finish this season off. But it didn't happen. For our own result, great one after disaster last time. Still our sponsors are not happy as they asked at least 1 podium finish. So we will have hard time to get enough money for next season.

Austria and Australia really ruined us
Happy for Jenson to have won Driver of the season, that's better than the Drivers championship right?

Congrats NLE for the constructors!
Next year is our year tm

Thanks @Jimlaad43 for running a great season!

What a race from Gilles ! I asked, he delivered ! Finishing this season with this #2 spot on the podium is amazing. Pal you have your seat for next year