A screw up in the pits before the race meant we forgot to reattach some important parts to Mario's car. No worries, we will scrape ourselves off the bottom shelf next week.

rubaru said:
A screw up in the pits before the race meant we forgot to reattach some important parts to Mario's car. No worries, we will scrape ourselves off the bottom shelf next week.
Click to expand...

Same seriously I'm just doing my thing and I hear word that we actually took out 500 hp and one of our wheels we inflatable. Dont worry we will win next time out

Very sad for Elio but what an AMAZING RACE by Gilles ! He did exactly what he had to do, very proud of you man.. But probably it would have been better if he did this from 13th to 1st position ^^ 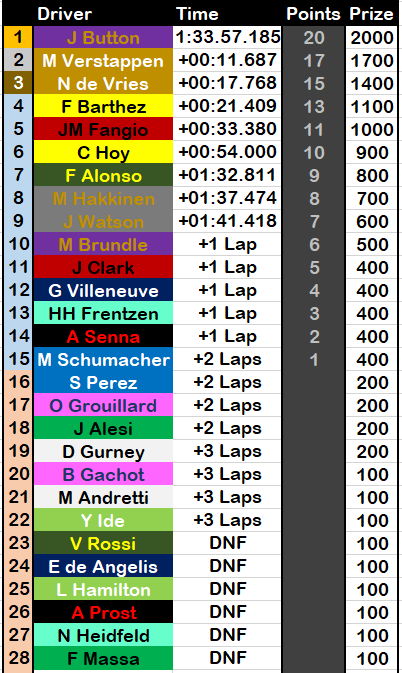 The title battle has closed to 4 points between three drivers after Jenson Button took another dominant win - despite colliding with a backmarker and clonking the tyre wall at turn 1. He took the win over both NLE Motorsport cars, with Barthez in 4th. Juan Manuel Fangio was 5th, but could have scored a podium had he not lost his front wing early in the race after a collision with a backmarker. 2KF1 Racing returned to the top 10 with a double points finish, but the star of the show was Gilles Villeneuve. After an awful qualifying put him on the back row and an early crash, Villeneuve carved his way through the grid to finish a brilliant 12th. Polestar Performance had a great debut race, with Olivier Grouillard only 2 places away from scoring a point. There were a few crashes in the race, chiefly Alain Prost's massive accident at 130R. A twitch in the middle of the corner saw Prost spin backwards into the tyres at vast speeds. Luckily the medical staff gave himthe all-clear after the race.

Interviews
@Millsy24 Another win for Jenson, and it puts him right back into title contention. Is Martin Brundle hobbling your chances of taking both titles?
@the_sigman your team speems to be great at getting into good positions, but retirements have blighted your charge in the championships. What do you think you can get if the reliability holds upf or the last rounds?
@ME9Swe a great debut for the true pinkboi's, do you think points are achievable this season?

Jimlaad43 said:
@Millsy24 Another win for Jenson, and it puts him right back into title contention. Is Martin Brundle hobbling your chances of taking both titles?
Click to expand...

Fantastic performance by Jenson, exactly what I asked from him. MB may well be hobbling our constructors chances, I had hoped he would upgrade himself but alas no. At least he isn't taking points off Jenson

Jimlaad43 said:
@the_sigman your team speems to be great at getting into good positions, but retirements have blighted your charge in the championships. What do you think you can get if the reliability holds upf or the last rounds?
Click to expand...

Damn buddy, I thought you'd tag me for something better than a seventh and I got all excited. This season has been the definition of mediocre, as I am always in the middle of the points scoring positions. Given that, I think the gaps to the positions above are not favorable and fifth is the maximum, but I've been sixth for the whole season and I expect to finish it there.

Jimlaad43 said:
@ME9Swe a great debut for the true pinkboi's, do you think points are achievable this season?
Click to expand...

Probably not this season as development has obviously come late but with Adelaide coming up, a high attrition rate could reward us if we keep our noses clean

Global Formula Automobilista ends up in a Failrace Episode again!

Oh iea bois we are famous 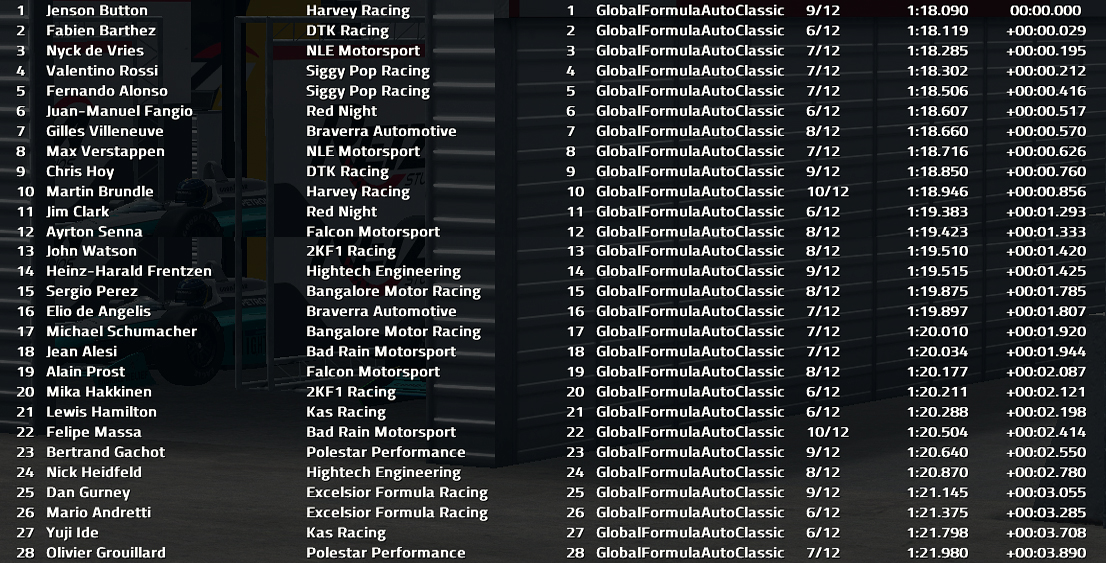 Jenson Button and Fabien Barthez, equal second in the championship, put their cars on the front row, as championship leader Verstappen plonked his car down in 8th. Siggy Pop found themselves in 4th and 5th, with Villeneuve 20 places up on his grid slot in Japan. Home teams 2KF1 and polestar found themselves in 13th, 20th, 23rd and 28th respectively.

Australian Grand Prix
I implore you to watch the race video in full. Don't just skip to the end to see the result, sit yourself down for 2 hours and enjoy this masterpiece of a race. it is unmissable.

This game has serious issues with the blue flags.

Again a race we that the team cant finish with booth cars..... and we again bought reliability upgrade

Omer Said said:
This game has serious issues with the blue flags.
Click to expand...

Nooo, don't say that. Now I'm afraid to watch it.
EDIT:
Congrats to winners, whole season fell apart in 1 race for us. How were both my drivers much slower in race then dark-green cars I have no idea. Fangio had most epic saves even though he was there only half of race.
Last edited: Jun 8, 2020

i'm just halfway through, but "throwing the toolkit in the nuclear reactor" is by far one of the best one-liners i've heard in ages

Agh, that was completely galling to watch Barthez run out of fuel. With Button dropping out at the same time it kinda killed any tension for the titles into the next round, but congrats to Max for taking the title. Chris somehow found himself on the podium after I don't know how many incidents, so we've still got the constructors title possible in the next round, but we will need some serious misfortune to strike NLE in the next race for that to happen. It's going to be tough, but DTK will go for it!

Let's finish this next week