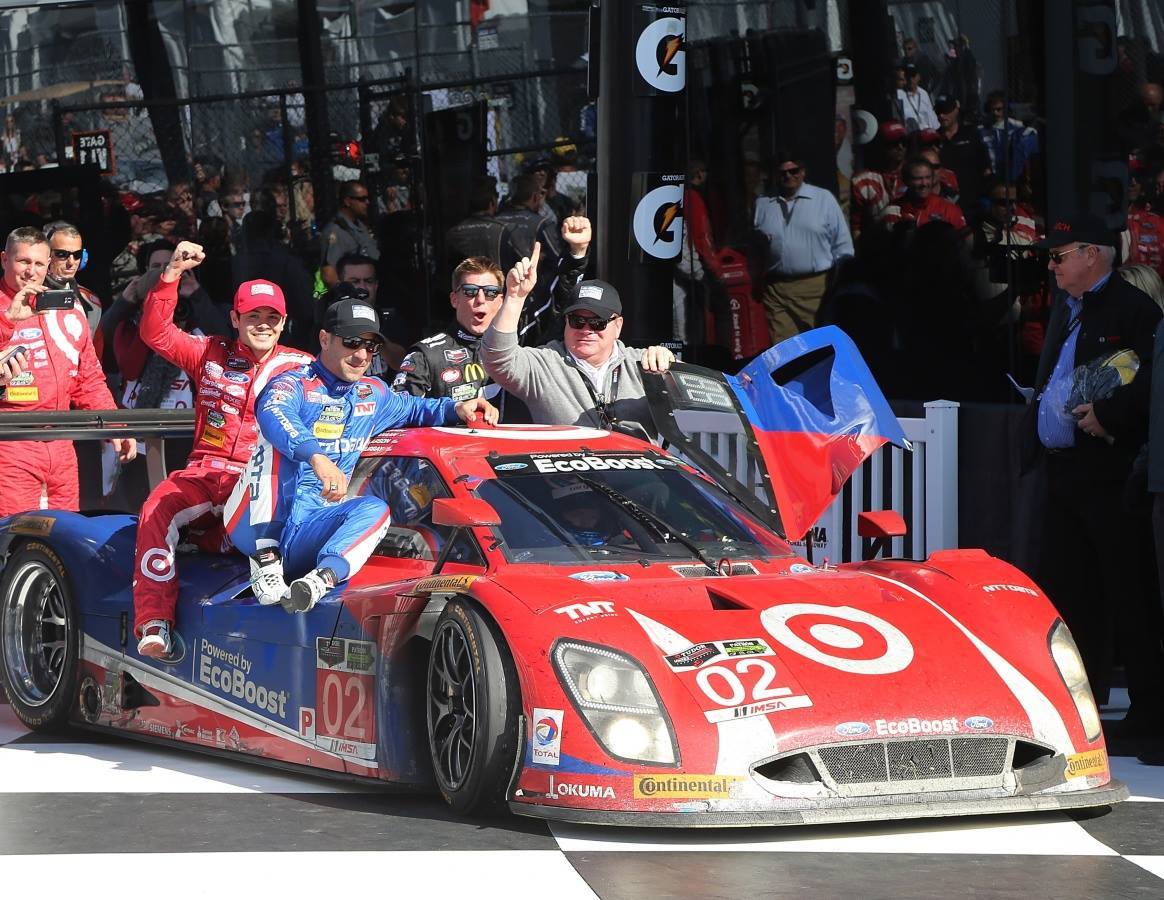 The racing dynasty that is Chip Ganassi Racing continues to grow in stature after claiming their sixth overall victory at the Rolex 24 Hours at Daytona, led by an all-star cast featuring three-time IndyCar Series champion Scott Dixon.

Dixon drove the final three and a half hours to finish just ahead of defending Rolex 24 winners Action Express Racing on track, employing his unrivaled skill in conservation and consistent driving to push the "Star Car" ahead to victory in the biggest endurance race in North America in the #02 Riley/Ford Daytona Prototype. The team's nickname was bestowed due to the heightened stature of the four drivers that also includes 2013 Indianapolis 500 champion Tony Kanaan, last year's NASCAR Rookie of the Year Kyle Larson, and his teammate Jamie McMurray, who by claiming victory at Daytona this Sunday, joins an elite group of drivers that have won both the Daytona 500 and the Rolex 24 - only A.J. Foyt and Mario Andretti had done it before. Dixon is now a two-time champion at Daytona, claiming his previous victory in 2006 alongside NASCAR veteran Casey Mears and the great two-time Indy 500 champ Dan Wheldon.

"The car was very consistent, and I think we had good speed, but everybody pulled their weight," Dixon said. "Everybody did what they needed to do, and that's what gets you through this 24 hours. Everybody kept the car in one piece.

"I can't emphasize how big of a team effort it is. It's not one person that ever wins this race. It's everybody involved, and this weekend everybody on the 02 team did their best job, and that was obviously enough to get the victory."

After securing pole for the race, Michael Shank Racing had to settle for being the best of the LMP2-spec cars in the field, with their Honda-powered Ligier JS P2 finishing sixth in class (eleventh overall) due to several setbacks - yet they were the only P2-spec runners to see the checquered flag. The team was led by NASCAR driver and former Champ Car ace A.J. Allmendinger, race pole sitter Ozz Negri, gentleman driver John Pew, and 17-year-old Matt McMurry, who set a potentially unbeatable record last year as the youngest entrant in the 2014 24 Hours of Le Mans.

The GTLM class, perennially the strongest in terms of overall competition going back to the years of the American Le Mans Series, once again had a strong showing - and in the end, it was the #3 Corvette Racing trio of Jan Magnussen, Antonio Garcia, and Ryan Briscoe that took top honors in the class, and an astonishing fifth place overall. They held on even after losing a thirty-second lead over the Rahal Letterman Lanigan Racing BMW Z4 driven by Dirk Werner, Bill Auberlen, and DTM mainstays Bruno Spengler and Augusto Farfus, who were second in class, and sixth overall.

It's the first big triumph for the Corvette Racing team at Daytona since their overall victory in the 2001 race. Behind them, the cars of defending class champions Porsche Team North America were both eliminated by one another in the same crash overnight, while the second Corvette of polesitters Tommy Milner, Richard Westbrook, and Oliver Gavin suffered damage early Sunday morning.

A frightening crash with twenty minutes to go took from driver Colin Braun and the entire CORE Autosport team what looked to be a dominant victory in the Prototype Challenge class. Instead, it was PR1/Mathiasen Motorsports who seized the chance and took class honors with drivers Mike Guasch, Andrew Novich, Andrew Palmer, and Tom Kimber-Smith.

Only three months after Chrysler's unpopular decision to abort its factory race team in the GTLM class, Riley Technologies restored honor to the Viper badge as their #93 Dodge Viper GT3-R claimed victory in the GTD class. Ben Keating, driver and full-time Viper salesman whose Viper Exchange dealership sponsors the team, struggled to fight back tears of elation as he and his fellow drivers Dominik Farnbacher, Kumo Whittmer, Cameron Lawrence, and Al Carter held off the Alex Job Racing Porsche 911 of Cooper MacNeil, Leh Keen, Andrew Davis, and V8 Supercars star Shane van Gisbergen for the victory. This comes as reports have surfaced that Riley is attempting to run the Viper GTS-Rs that were abandoned by the defunct SRT Motorsports at this year's 24 Hours of Le Mans.

The TUDOR United SportsCar Championship goes from one prestigious endurance race to another, as on 21 March the series will venture slightly southward in the state of Florida for the Mobil 1 12 Hours of Sebring.
Last edited: Jan 26, 2015
Click to expand...

Premium
I would have liked to see the P2 cars do better ; it appears that they have narrowed the performance gap between P2 and DP. However, there is still a ways to go.

I had to chuckle at the bonehead maneuver that took the 2 Porsches from contention. Teammates are supposed to avoid contact .

Glad to see the Viper win the GTD class.

Reliability wasn't on the HPD or the Ligier's side, save for MSR.

The P2 cars may have a better outing at Sebring provided this year's race isn't full of unpopular shenanigans.

Premium
Anyone knows where a good video recap of the race may be?
M

Sk3ptik0n said:
Anyone knows where a good video recap of the race may be?
Click to expand...

IMSA youtube channel on 720p60, should be available 24-36 hours after the race end
M

R.J. O'Connell said:
Reliability wasn't on the HPD or the Ligier's side, save for MSR.

The P2 cars may have a better outing at Sebring provided this year's race isn't full of unpopular shenanigans.
Click to expand...

Yeah, all American wins! Check out the race overall results. With a few more Prototype cars out the GTLM cars would have made it on the overall race podium.
You must log in or register to reply here.