Hello GSC community, a new player here, I was slow on the uptake, pouring the last few years into a well known multiplayer racing sim.

After deciding to get back to the real deal I reinstalled all the old classics, bought Rfactor 2, spent up on RRE including DTM and bought a game I hadn't heard of before GSCE.
Just have to say, GSC is now my all time favorite racing sim (previously GTR2), I could go on and on but I would be preaching to the converted.
So thanks to Reiza, good to know a studio hasn't compromised and released a truly outstanding product, rare thing these.

Anyway enough of the chit chat, I have a weird frame rate problem with GSCE.

If I run GSC without vsync it looks like I'm dropping frames, like running in the 30s even tho at the lowest it's 120fps (turn 1 at times), highest, 300fps (most of the time).
Vsynced at 120hz or 60hz (with correct monitor HZ) it's silky at all times.

I would be happy with running sync with a solid 120fps, I max everything except shadows, this is my second problem
With max shadows (now GSC totally maxed) the frame rate drops to min 90, which would be fine but I get serious random stutters even on 60hz vsnced (never dropping below 60fps).
I notice the red bar under the green is maxing out, virtual memory problem?
I have tried capping the frame rate in the config but still no joy.

Anyone help with this?
Thanks in advance.

what do you have time scale set too? if its on Normal or any x2 etc try setting it to NONE and see if that helps.

do you run a nvidia or ATI card ?

seeing as your new here and to GSCE. check out some files I'd consider "essentials".

My favorite mod at the moment Clio cup:
http://www.racedepartment.com/downloads/clio-cup-2013.2556/

Premium
the one setting that has a HUGE impact on my setup is shadows on max, i run an i7/gtx780 machine and with shadows on max i was getting a lot of stuttering, ive seen the devs mention a few times about shadow optimization so maybe its something they are still working on

Hey thanks for the response.

What's the red bar mean on the frame rate resource bar? HD? I notice it goes red on loading, makes sense if it's using the page file, the engine may not be optimised in its memory usage, age maybe.

I edited the config and corrected the VRAM and system memory which helped frames a lot, previously I could only run 20 AI, on high settings.
Come to think of it setting track and object detail back to defaults may be worth a shot.

Will check out the mod links, the HD mirrors sound the ticket.

Premium
And don't forget to check out our race club

Did you try what I said or not?

Do u use nvidia inspector?

I'm running triples off a gtx590. With 2x 780 I think it should be smashing out FPS fully maxed without any probs

Ah, you mean "off" is different to "normal". Will definitely give it a shot, thanks R1.

Yeah I can live with 90fps maxed but like I said, no vsync and it looks stuttery (no issue here on AC, DTM, Rfactor or IceRacing) and I get the red bar flashing which bogs it down randomly, even tho the frame counter doesn't move.

Will give the off setting a go, thanks again.

Ok, thanks Andrew for the Race Club link, will be very interested in the near future.

Not sure of the pace out there, most likely pretty hot, my best Interlagos cafe time with stock cars on near default setup is 1.40.8, tho today was the first day I could settle down and race (finished 7th 100% AI, 10% aggression, 50 min race distance).

Actually a weird thing happened, I was leading the race, pitted, took on tyres, and finished 7th.

There was a caution early so maybe the AI pitted before, and caught up under yellow.

Is there mandatory AI pit stops? I know they pit for damage. I turned off replays, might have to turn them back on.

Christian Casey said:
Ok, thanks Andrew for the Race Club link, will be very interested in the near future.

Not sure of the pace out there, most likely pretty hot, my best Interlagos cafe time with stock cars on near default setup is 1.40.8, tho today was the first day I could settle down and race (finished 7th 100% AI, 10% aggression, 50 min race distance).

Actually a weird thing happened, I was leading the race, pitted, took on tyres, and finished 7th.

There was a caution early so maybe the AI pitted before, and caught up under yellow.

Is there mandatory AI pit stops? I know they pit for damage. I turned off replays, might have to turn them back on.
Click to expand...

The racing clubs have all skills of driver, so no matter how fast or slow you are, you're bound to have good on track battles. Especially with the Clio races.

Nice, thanks all, will check it out further.

Christian Casey said:
Ah, you mean "off" is different to "normal". Will definitely give it a shot, thanks R1.

sure is different, when V1.15 was introduced a few of us had stuttering even with over 60FPS looked more like 15 as well as general overall FPS loss... see the below post from page 6 onwards in the V1.15 bug thread.... you need to try out nvidia inspector far more options to improve graphical appearance etc


R1-Robbie said:
with the couple of posts i have in this thread about v1.15 introducing stutters (even when FPS show 60+) and FPS drops compared to the v1.10 on the same PC, same HDD, using same settings etc. i had tried all the suggested fixes in this thread to no success, and this evening i was swapping back and forward between versions comparing the FPS drops and stuttering and just generally trying to figure it out seeing as all settings were identical. i was testing at Taruma and a rFactor conversion track (Jerez, which has really high FPS) etc..... then i noticed my v1.10 had time scaled set to NONE whereas v1.15 was set to NORMAL (maybe by default??). so i changed that to NONE in v1.15 and tried a couple of the same tracks i had been testing and voila!! the two tracks i looked at so far had their FPS back up and no stuttering present whatsoever.... I am going to test a few more and will post my outcome.

perhaps you other guys with stutters should set time scale to NONE and see if that helps yours too...
Click to expand...

Glygoo said:
BRILLIANT! THIS WORKS FOR ME TOO. I also noticed that the TIME SCALE setting under RULES was NORMAL in 1.10 but it changed to RACE % in 1.15. I changed this setting back to NONE, cranked up the DISPLAY setting to ULTRA and NO MORE STUTTERS even at Montreal.

Sorry about the capital letters but I'm excited because R1-Robbie might have found the cause of everybody's stutter problems.
Click to expand...

Mate, if this works I will be pretty stoked, will be able to max the shadows.

Will keep you posted.

Will also reinstall the nvidia inspector, I havnt used it since it was causing problems with some random game, DCS world maybe? Either way will give it another go.

I hope it does sort your issues for you... here is a screenie of my N.I. settings for a GTX590 running triples.

You should be able to use 4x Sparse grid though. 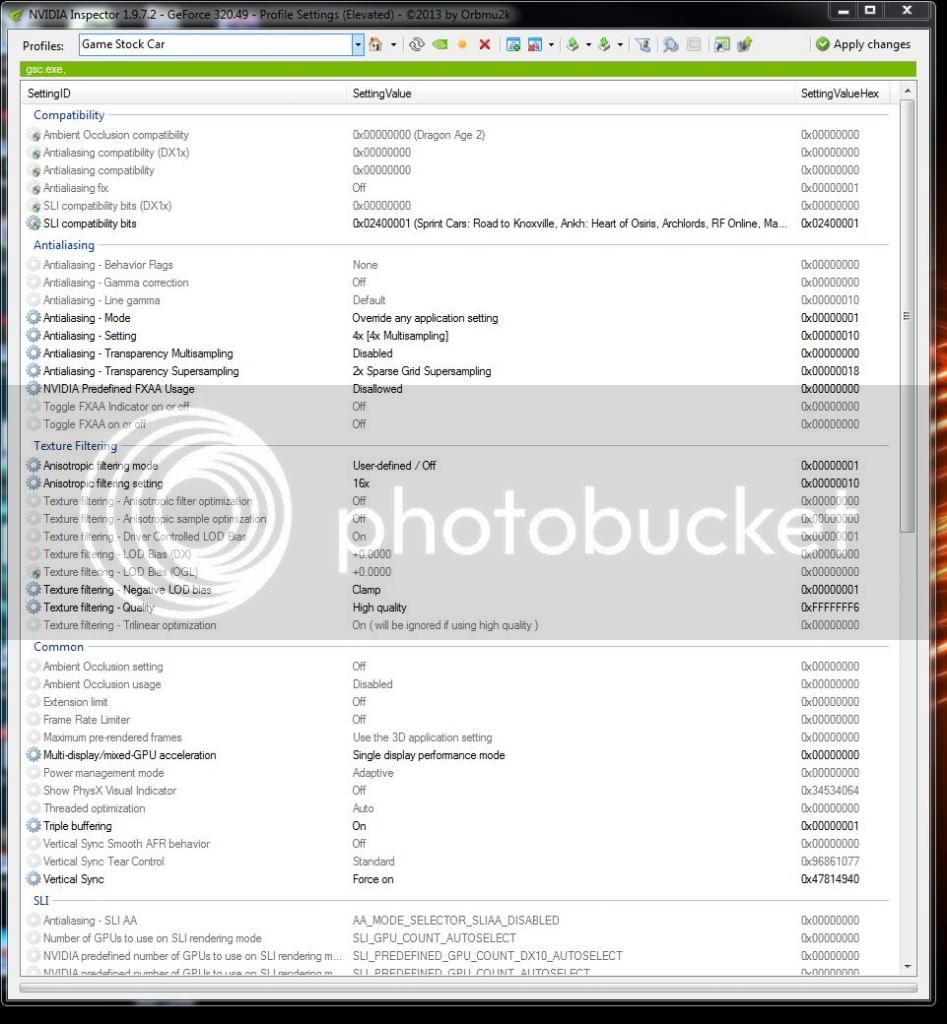 Just tested, it does work, the low FPS "look" has been fixed, now un synced it looks smooth on higher frames.
Great tip there Rob.

Still have the problem with maxing shadows, it's an old engine so it would be understandable if it wasn't for the fact that it's indicating 90fps minimum (seems to drop at a specific turn on interlagos) but looking like 45, fine at 120+.

Still have some things to try, locking down settings in Nvidia inspector and disabling nvidia surround.

Either way it looks fantastic, maxed with med shadows so definitely not disappointed.

Thanks all for the help, will post if I come up with a solution.

I running nvidia surround with bezel compensation... all good here, do you have multi view ticked in the GSC Config.exe set up?

setup your bezel compensation in the nvidia driver screens then run the GSC Config.exe select that custom resolution that was just created in the GSC config.exe, enable multi view and your should be all good.

sorry if you know all this sorta thing already. just seemed odd your disabling nvidia surround

Disabling surround to test if there is some scaling problem with the bezel correction.
I have seen games not liking the scaling at all, Mechwarrior Online was one for me.

It's like (technically not correct I understand) but on the software level it's stable but what I'm seeing is not.

Thanks again for your help Rob, and no appologies necessary, I understand you gotta be systematic when giving support.

D
Why do I get poor frame rates when my GPU isn't working hard? (VR)
2