The March Car Pack , you can download it on Live

I avaible on 13th march
C

I personally don't own a XBOX360... But I'm sure there are memebers around here who DO have one

I have one unfortunately my gamertag is Trebor901

what games do you play apart from forza

ill have to clear some space for you

Ok, back on topic again: Forza
B


Forza Motorsport 2 Review
It's the best racing sim on Xbox 360, but is that really saying much?​
by Hilary Goldstein
​
May 29, 2007 - Burnout is about speed; Project Gotham Racing is about looking cool; Forza Motorsport is about cars. No game has yet to take all three of these fundamental elements and merge them into one brilliant package. Though hopes were high for Forza Motorsport 2, it fails to give the sensation of blazing speed and there's almost no cool-like-the-Fonz elements in this $60 package. Like its predecessor, Forza 2 is about cars and in that area it does exceedingly well. So if you're a car nerd, prepare to have your tires popped by what Forza 2 offers.

If you love cars, you will likely love Forza 2. And if you're a wide-eyed child in the world of automobiles, Forza 2 may actually inspire a newfound appreciation for cars. With more than 300 cars included (and more likely to come through downloadable content), Forza 2 has a great variety of vehicles. Each class of car has its own unique feel, so that you can instantly tell the difference between racing in a muscle car or putting pedal to metal in a high-end plastic sports ride. There's a car for everyone.

In my 40 hours with Forza 2, I found a new appreciation and joy for driving an old Dodge Charger. The chugger is heavy and the tail swings easily with sharp turns, but the challenging metal beast has become my personal favorite. Moving from the Charger to a Ferrari is like going from playing an SNES to a 360. It doesn't have the sex appeal, the smooth curves, or the firepower, but it's my preferred ride nonetheless. 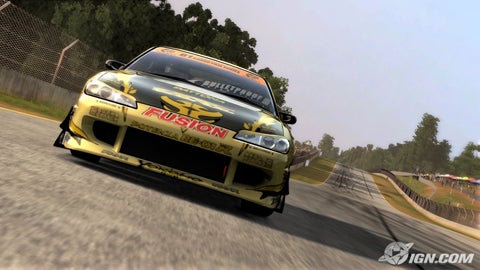 ​
Developer Turn 10 has gone to great lengths to improve on the car physics, which were already excellent in the original Forza. While the game runs at a smooth 60fps, the physics run at 360fps, meaning that every minute change in the car and track is calculated almost instantly. Every aspect is a factor, including the heat of tires and any damage incurred while driving. The majority of these calculations exist behind the scenes and will never be noticed by gamers. In the end, it's really about the ride itself, but the physics help make that as real an experience as possible.

Turn 10 devoted itself to realism from top to bottom. That's admirable, but it does create some limitations. In trying to shove every last physics variable under Forza 2's hood (and pumping the framerate to 60fps), sacrifices had to be made. Races take place only during the day and under perfect weather conditions. The horizon is marred by a tremendous amount of jaggies as aliasing issues persist in pretty much every area of Forza 2. Cars, which are the showcase of the series, have some distracting jagged edges. The real-time reflections sometimes stutter across hoods and windows. With so much focus on accurate models, damage, and a fast framerate, Forza 2 couldn't afford to render a dashboard camera, easily the most immersive view possible in a racing title. 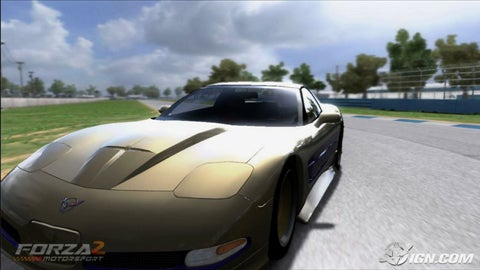 ​
Don't get me wrong, I'll take a racer at 60fps and full damage modeling over a clunky racer with bad physics. But there's no denying that racing games are largely judged on the visuals. People expect to be blown away by the look of the cars and the beautiful tracks. On that level, Forza 2 disappoints. It can't all be blamed on the physics and framerate. The art style for Forza 2 is bland and the colors in the realistic tracks are drab. Turn 10 dropped the ball artistically, both in the tracks and in the menus. Every ounce of inspiration and passion seems to have been infused in the cars, but a racing game is about more than just the vehicles you drive.

The bulk of your Forza 2 experience will likely be wrapped up in the formidable single-player career mode. Expect to devote at least 20 hours to completing the career mode, though it's conceivable this might eat up twice as much time depending on your skill level. One wrinkle added to the career mode is inclusion of driver regions.

At the start of your career, you must choose to be from one of three regions: North America, Europe, or Asia. The region you choose determines some of the rewards unlocked in career mode and affects the pricing of cars and parts. Being from North America means American cars are easy to come by and therefore a little cheaper. But it also means it's going to cost you more to buy a Porsche. The hope is to create a Pokemon-like situation, where gamers who choose to be from North America trade cars with someone playing from the Asian region. This way you can more easily (and affordably) collect cars that might be tougher to come by because of your region. This doesn't mean someone playing from North America never gets to drive European cars (far from it), it just means the costs and rewards are skewed towards your chosen region. It works well, though there are certain to be some who would rather live a region-free life.

To encourage gamers to play through all of career mode, Forza 2 features a dual-experience system. Every race in which you show earns some credits, which acts as experience for your driver and your car. As your Driver Level increases, new events open to you as do discounts from car manufacturers. Every vehicle can earn up to five Car Levels, which are awarded for whichever car you are driving in a race. As you level up a car, you earn parts discounts. This acts as incentive to race the same car multiple times and may foster love for a particular vehicle. It's a little curious why Turn 10 decided to cap a car's experience level, since you can reach level 5 fairly fast. 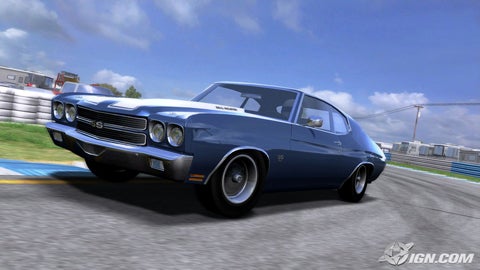 ​
Most aspects of the career mode work well, though Turn 10 did make a few odd choices. Of particular concern is how gold is earned for events. When you enter an event, you are usually faced with three or four individual races against seven AI opponents. Though you can earn bronze, silver, or gold in a single race, few events work off a points system. With the exception of a handful of events, you must win gold in all races to get gold in an event. This goes against pretty much every racing game around. Usually you get 5 points for gold, 3 for silver, and 1 for bronze. Whichever driver has the most points after all races are completed wins the event. Not so in Forza 2. Even if you get gold in two races and silver in another, you won't earn gold for the event. You have to get gold in all races to get gold in an event. It's not a big deal, but it certainly seems like a strange design choice.

The real issue I've found with career mode is that it's far more about building a great car than it is about being a great racer. The first half of career mode is open no matter the ratings of your car (separated into letter classes and a numbered Performance Index). You only race against factory settings, meaning that with just a few upgrades, your car can become dominant. As long as you take turns cautiously, you can start smoking the AI in no time. With a very limited number of tracks (almost all of which are identical to the tracks in the first Forza), it can get a little boring at times. The problem is that if you try racing with an inferior car, it's very difficult to win -- even if you are an impeccable driver. 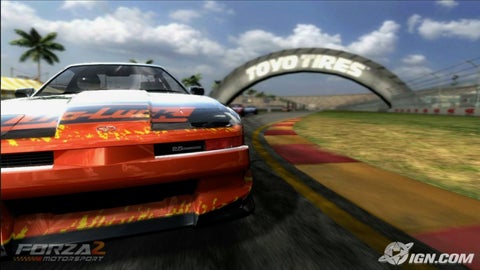 ​
I will admit that I get tremendous joy from upgrading my cars. There's nothing quite like turning a Saturn Ion into a racing beast that can take on a Ferrari 360. The upgrading system is as in-depth and detailed as anyone could possibly want. It's truly incredible. And an unusual mini-game has been created when trying to upgrade your car while keeping it from ascending into the next letter class. That said it would be nice if the AI also upgraded its cars (and had a few unique paint schemes). Then it would feel like an active competition instead of paint by numbers racing.

Should you get tired of playing against the AI (which, at times, is a bit too aggressive), you can play against up to seven other gamers on LAN or Xbox Live (expect them to be even more aggressive). The online elements are solid, with the option for exhibition, career, and tournament races. Career races earn experience for your driver and car, while tournament offers a series of predetermined races to decide an overall winner. Racing against other folks in the U.S., I experienced only one brief touch of lag. Otherwise, multiplayer works great on Forza 2. For those without broadband, there's a split-screen option in case you want to race a buddy on your couch.

As I said, Forza 2 is about the cars. And along with creating a racing beast with upgrades (and the ability to swap powertrains), you can also create your own, unique skins. In the original Forza, gamers had a few hundred layers to create inspired works of art. In Forza 2, they have several thousand. The improved decal options enable gamers to create any look they want for almost any car they own. Cars can be gifted with a skin so that you can create an impromptu racing clan, all with an identical look. I just wish Turn 10 had the same level of artistic inspiration shown by the thousands of gamers who visually pimp out their cars.

Forza 2 has some incredible community support tools. Chief among these is the new Auction House. Here you can put any of your cars up for auction. You can even lock down the skins, forcing a buyer to use your chosen look. Deck out a car and put your personal stamp on the hood. Sell the car with a locked skin to ensure that everyone knows who's responsible for its look. The Auction House, along with all of the community elements, is easy to use and adds some much-needed personality to an otherwise charmless package. 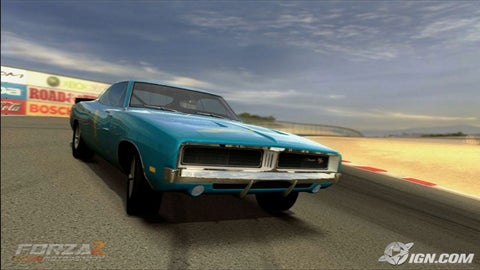 Closing Comments
So Forza 2 has brilliant physics, great customization options, and solid online play. So why isn't it earning greater esteem from IGN? As I said early on, a racing game is about more than just the cars. Much like its predecessor, Forza 2 lacks soul. The only personality you'll find in Forza 2 are the custom skins created by fans. While it's certainly an enjoyable and well-made game, it just doesn't have the spark of energy and excitement found in almost every other racer.
Cars are supposed to be sexy, but they aren't sexy in Forza 2. Sure, they are accurately recreated and have spot-on physics, but Forza 2 is the Ed Asner of racers. It's talented, but you wouldn't want to take it to bed.
R

This is the link of the first Xleague TV show on Forza 2 last year, which I won for Team VVV against TCG. The title had only been out a week and the standard of competition wasn't very good but hey-ho. Took place in London.

They've taken down Part 4 (Tsukuba and Sebring), the two most exciting races, which is a bit strange (both of which I won also grrr).

Sold it, no longer have time for it. I played Forza 1 for 1600 hours in total, that's just not healthy